What a thriller finish! Domnarvets GoIF’s Lena Eliasson took the victory ahead of Tampereen Pyrintö’s Anni-Maija Fincke after being behind for 15 of 17 controls. Everybody had prepared for a Finnish victory when Fincke missed the tricky 16th control and Eliasson could slip by to take the victory.

This was a special experience for Eliasson after loosing more than 20 minutes on the last leg for Domnarvets GoIF’s on last years edition of the Venla relay. Read on for the decisive moments in the relay explained based on the GPS tracking. 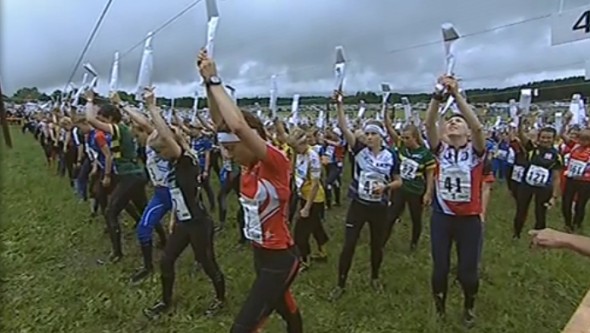 The first leg is not were you win the relay, but rather were you loose the relay. Of the top teams, Ulricehamn was the looser on the first leg this year – doing some big mistakes early in the leg. Domnarvets GoIF run very well – taking the lead in the forest ahead of Halden and OK Tyr. 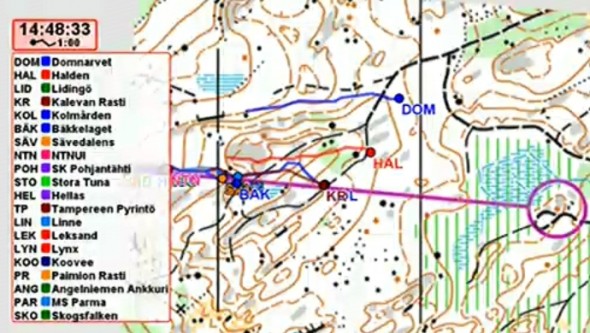 Towards the finish, OK Tyr was strongest in the run-on, and OK Tyr took the first leg with Linnea Martinsson. – I did some mistakes in the start, but am very happy with the race after that. It was a lot of fun running in this terrain. 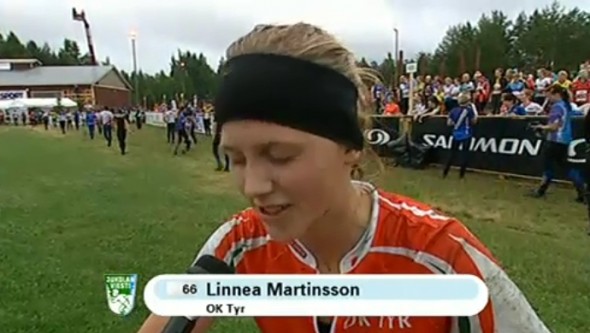 Out on the second leg Domnarvet takes the lead ahead of Halden. 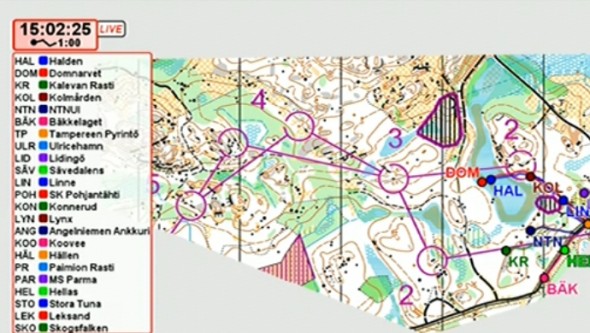 Domnarvet GoIF’s Karolina Höjsgaard runs very well in this first part of the leg, increasing the lead steadily to the other runners. 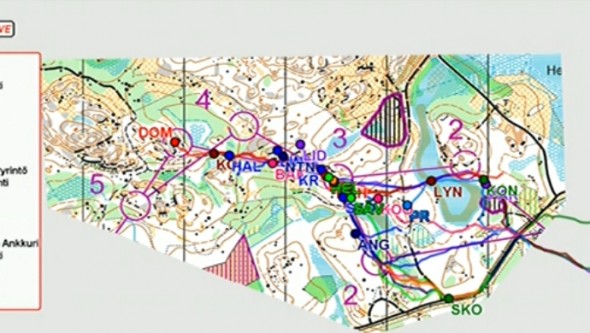 Kalevan Rasti makes a mistake to the second control, and looses further time to the lead (after being 37th and the changeover). The same also with Koovee. Halden SK (Ingunn Fristad) does a mistake between number 3 and 4 – looses maybe 20-30 seconds there. 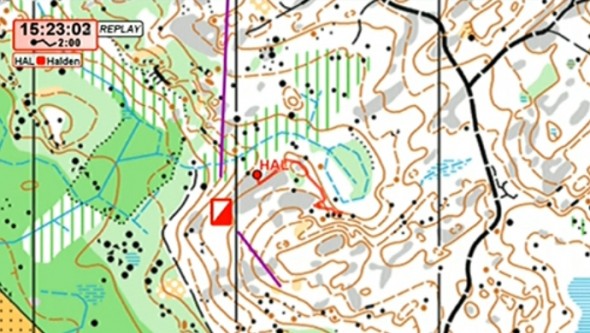 Karolina Höjsgaard continues well in the remainder of the leg, giving Domnarvets GoIF a big lead of nearly a minute at the changeover.

– I run alone all the way from the 3rd control. It is a very good feeling. I run well in the start, but did a quite big mistake in the end. Then I run to the wrong last control, but did not loose a lot on time on that. 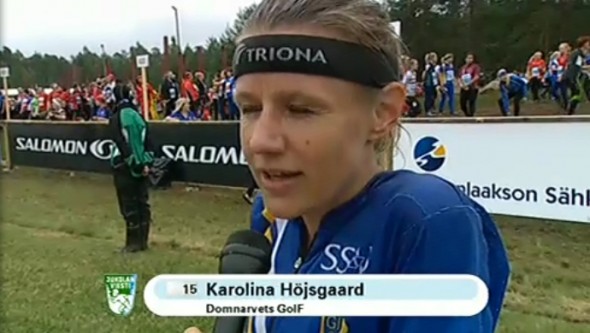 On the third leg, Eva Jurenikova looses some time early on the leg. Tampereen Pyrintö’s Riina Kuuselo takes a left route choice on the long leg early in the leg, and earns some time, being only 26 seconds behind on the first intermediate control. 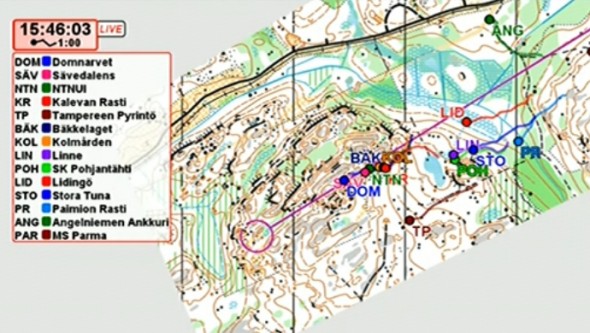 Tampereen Pyrintö’s Riina Kuuselo continues to run well, and catches up with Jurenikova by 2.9 km. Meanwhile Store Tuna’s Tove Alexandersson is running very well. After being 3:15 behind at the changeover, she takes that down to 1:48 at 2.9 km. Halden’s Celine Dodin does also a good run for Halden, taking Halden up towards Top 20 again.

TP and Domnarvet have different forking, but still keep approximately the same speed and avoid mistakes. A the 9th control (4.2 km) Tampereen Pyrintö’s Riina Kuuselo takes the lead one second ahead of Domnarvets Jurenikova. 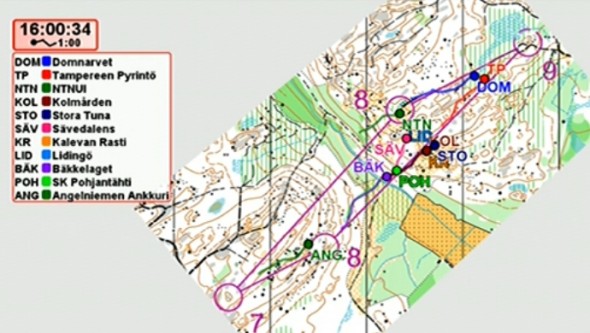 To the changeover, Tampereen Pyrintö’s Riina Kuuselo is strongest – but Jurenikova hands the map over to Lena Eliasson on the last leg first. Kuuselo was very happy with her race.

– I have mostly rested for two weeks. I did a very good race and did my own route choices.

Everything ready for a tough fight on the last leg then. 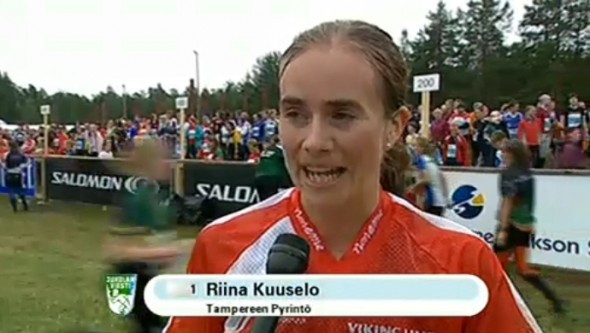 Out on the last leg Tampereen Pyrintö’s Anni-Maija Fincke gets a very good start, steadily increasing the lead to the others. Domnarvets GoIF’s Lena Eliasson looses time around the second control – and then also more on the long leg to the third leg. Eliasson lost a lot of time at the last leg of Jukola 2010 – and although her start in 2011 is better, this does not look good enough for victory. 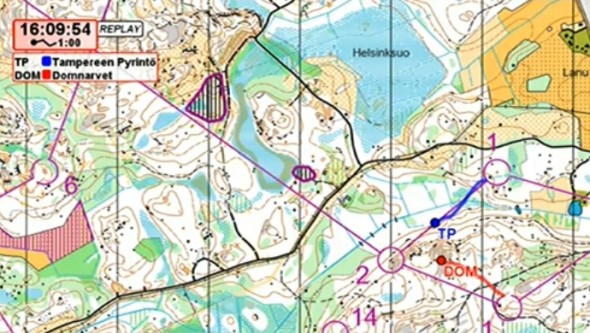 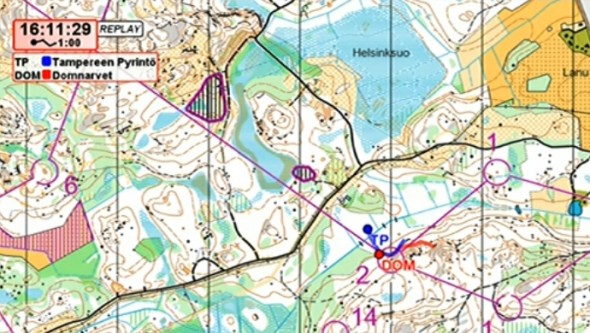 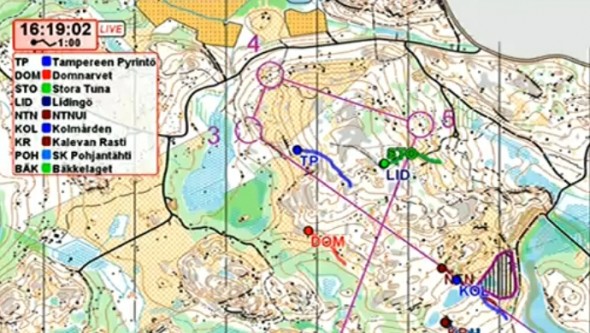 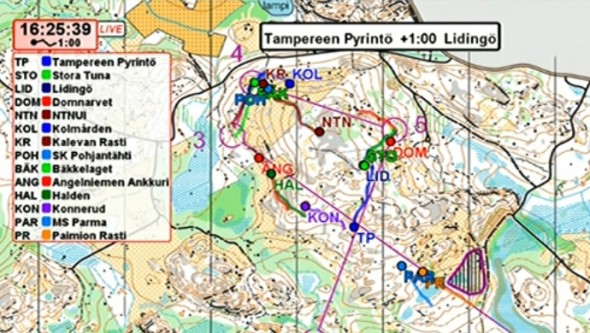 Then towards the 6th control – described as the most tricky control in the course by the course setter – Anni-Maija Fincke also has to do some searching. For a small moment it seems like Domnarvet might get contact again. 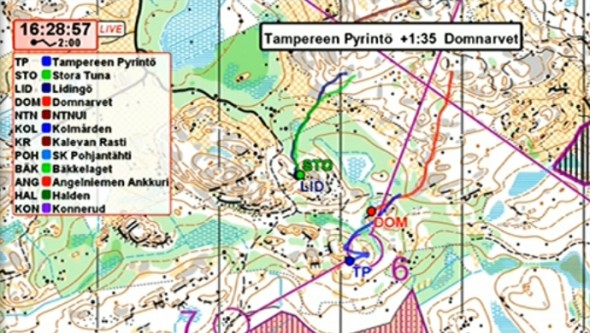 But then Domnarvet does an even bigger mistake. 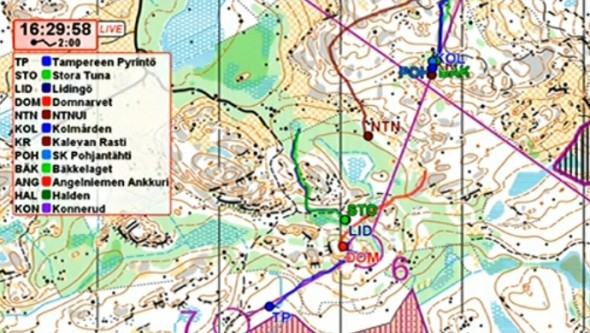 Anni-Maija Fincke continues to build out her lead, increasing it to nearly than 2 minutes. 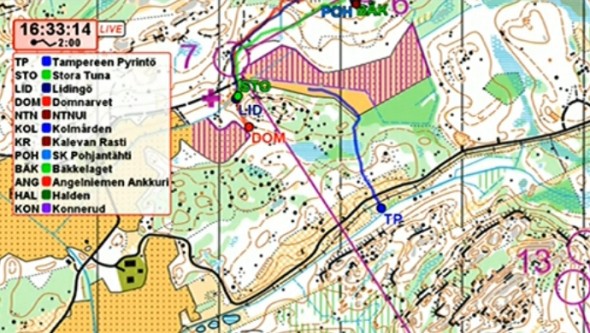 Then Lidingö runs to the wrong forking, and looses out in the fight for the victory. So does Stora Tuna, so the fight now is between only TP and Domnarvet – although the lead of Domnarvet is 1:30 at the radio at 5.7 km and the victory seems clear. 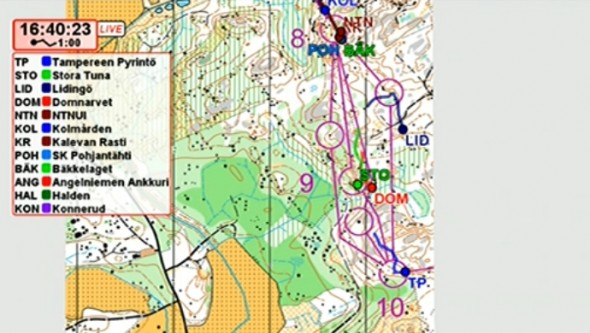 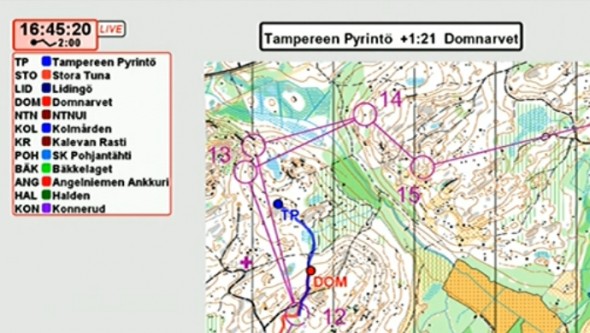 Domnarvet has slightly higher speed than TP though, and just as it looks like it might get exciting again and TP looses some time to control 14, it is clear that Eliasson has been running with too high risk – making another quite large mistake. 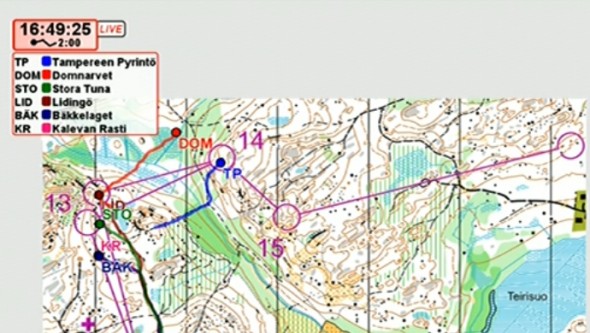 Still, Eliasson actually catches some seconds on Fincke and Domnarvet is 1:23 behind at control number 15. At control 15 we then have the following standing:

Just as it looked like TP had a clear victory, the “impossible” happened at the 16th control – a control which looked very tricky on the map – and was so in reality as well. A really big mistake for Anni-Majia Fincke, giving the victory in the hands of Lena Eliasson and Domnarvets GoIF. 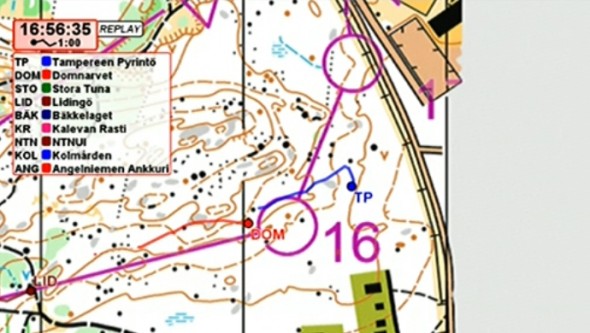 Lena Eliasson did nearly not believe what she was seeing when she saw Anni-Maija Fincke at the second last control.

– It feels very good. It was a bit too exciting, because I made a mistake in the start. I did not see Anni-Maija before I surprisingly saw her at the second last control, and then I run all I could to the finish. It feels extremely good. The team is great. We even had Dana Brozkova exchanged with Emma just recently, but still managed to win.

Fincke was of course very disappointed with her big mistake in the end.

– I knew 100 meter before the control exactly where I was. I did not know were the others were, and therefore run too fast and went just close by the control.

Jan Kocbach is the founder of WorldofO.com - taking care of everything from site development to writing articles, photography and analysis.
@jankoc
Previous Jukola and Venla: Interactive graphs of race development
Next Jukola 2011 – Decisive moments from the GPS