World Cup Final: All you need to know!

Jan Kocbach September 29, 2011 Orienteering News Comments Off on World Cup Final: All you need to know! 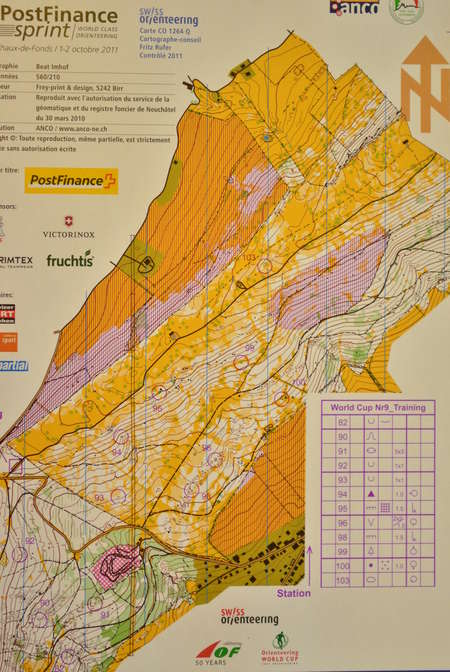 The overall World Cup will be decided in Switzerland this weekend. Excellent live coverage with GPS-tracking, web-TV (Sunday) and live results is promised . With the fight for the title still open in both the mens and womens class, everything is set for a great weekend for orienteering enthusiasts. Saturday the runners compete in a middle distance race in the Jura mountains – Sunday everything is decided with double World Cup points in the PostFinance Sprint – a city sprint in La Chaux-le-Fonds.

Note! Remember to set up your Fantasy World Cup Team ahead of the World Cup final!

The sprint is organized in La Chaux-le-Fonds – the same area were the sprint qualification of the World Masters 2010 was held. The street pattern is quite structured – and it might thus not be as tricky as it was last year in Geneva. You can see one of the courses from WMOC 2010 below (full map here via omaps.worldofo.com) – or see the last page of Bulletin 3 for the complete map in better quality.

You can follow the World Cup final via webTV, GPS-tracking and live results via the following link:

A lead of 148 points for Hubmann is quite clear, but still he has to take more than 152 points if Gueorgiou wins both the last races.

Daniel Hubmann and Annika Billstam still lead the overall World Cup (see results here) after the 3rd World Cup round in Liberec, Czech Republic. However, their leads have gotten smaller.

In the mens class Daniel Hubmann leads with 508 points compared to 360 points for Thierry Gueorgiou in second spot. Matthias Merz is the third runner who has a chance for the overall World Cup victory – sitting in third spot with 348 points. Both the last races count in the overall World Cup – and the last race gives double points (200 points for victory). Thus there are 300 points to be given in the last two races. A lead of 148 points for Hubmann is quite clear, but still he has to take more than 152 points if Gueorgiou wins both the last races.

– My position in the overall World Cup with a 148 points lead is very good. I have now got the decision in my own hands, and am looking forward to two exciting races […] on Swiss ground, overall World Cup leader Daniel Hubmann writes on his blog.

In Saturdays race 100 points are awarded to the winner, 80 points for number 2, then 60, 50, 45, 40, 37, 35, 33, 31, 30, 29 and down to 1 point for the 40th spot – double these points for Sunday. Thus Hubmann – the winner of the last three editions of the PostFinance Sprint – needs to have a good race in the sprint on Sunday to be sure to get the overall World Cup for the 4th time.  Hubmann has been better than Gueorgiou on sprint races, and Merz might therefore be just as big a rival for Hubmann as the French superstar. 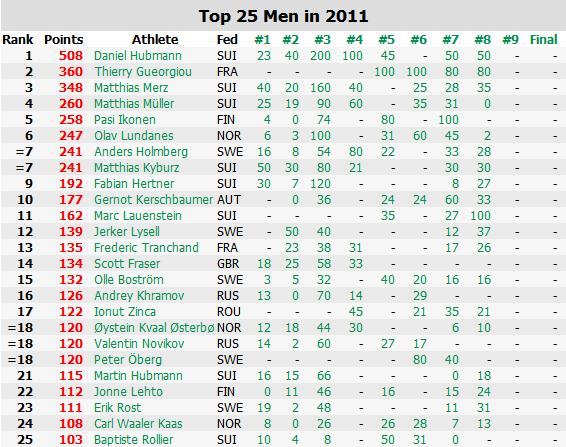 In the Womens class it is a lot tighter. Annika Billstam has now a lead of 71 points after being ill last weekend and not starting in the long distance on Sunday. Between number 2 and number 6 there are only 35 points – and thus it is very open in the womens class with a lot of women having a change to take the overall victory.  With the sprint race on Sunday giving double points, the sprint specialists have an advantage. That means Lena Eliasson, Helena Jansson and Maja Alm.

– A very surprising opportunity surfaced after the World Cup races in Czech Republic. I am actually one of the runners who has a possibility to win the overall World Cup this year, a happy Lena Eliasson writes on her blog. 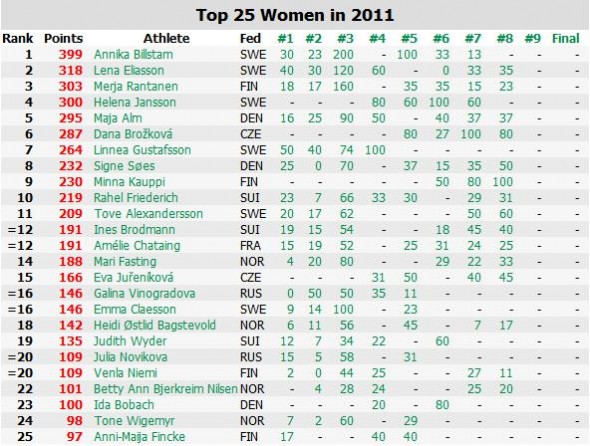 Jan Kocbach is the founder of WorldofO.com - taking care of everything from site development to writing articles, photography and analysis.
@jankoc
Previous The Orienteering Elite Unite against WOC program
Next World Cup Final Middle: Live from 12:20 CET