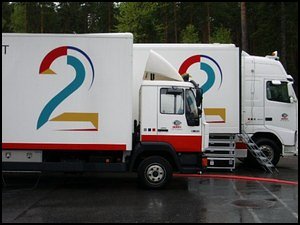 The plans for the TV coverage for the World Cup race in Hovden during O-festivalen 2007 were gigantic, when considering that this is an orienteering event. Norway’s largest commercial TV channel, TV2, had really ambitious plans for the race at Hovden. The plan was to spend 200.000 euros – three times the amount spent for the Norwegian Cup final in soccer(!) – for the production of a single orienteering event.

– When you use micro orienteering and enough cameras, orienteering can be very good television with lots of drama, TV2 top sport producer Jens C. Knudsen said during a presentation he held at a seminar at the Norwegian Orienteering Federation’s big gathering this weekend. Unfortunately for the sport, and for Petter Thoresen and all the others who have been working hard to get orienteering TV coverage the last years, Knudsen had a disappointing message. – There will be no TV coverage at the World Cup event at Hovden next year. 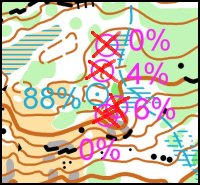 No TV = No micro
– With no TV deal with TV2, we have asked the IOF to be allowed to make the World Cup race in Hovden without micro, Kristiansand OK’s head of O-festivalen 2007, Jack Bjørnsen, could inform the seminar attendees. – This week we got the message back from IOF that we are allowed to go ahead without micro, he continued. This is another big blow for the people behind the micro project – headed by Jan Vidar Nielsen, Morten Dalby and Ulf Rogstad – after micro being taken off the program at the middle distance at WOC 2006 in Denmark. However, they have by no means given up. Instead, they are still working on optimizing the micro competition form, and have in addition introduced macro – which is basically using micro controls as a part of normal orienteering course. These issues were also presented in detail during the seminar, and will be covered in a separate article here at World of O later this week.

Orienteering taken seriously
Although the decision for the WC races in 2007 was no, there is no question that the orienteering sport is taken seriously by TV2. Knudsen has already spent some time at the event site in Hovden with the organizers, and identified the best spots for the micro controls from a TV viewpoints. – At one suggested control site, I said that no, I can’t use this control site, Knudsen commented. Instead he found other spots which fit the TV concept perfectly. – Don’t put the control on the hill when you can put it in the pit below the hill, Knudsen continued. – At control 12 at the NOC [control 12 was the start of the micro course at NOC 2005 in Notodden, covered live by TV2], the runners had to get through
a deep pool of mud – and the thought of the viewers typically was How far into the mud will the next runner sink. This was good television!

Spectacular and informative
– We planned to use large TV cranes to film the micro area from above. For each control group, we would put a ring around the controls, and indicate which control was the correct one. Then zoom in on the runner to get close to the action, and afterwards zoom out again to the overview picture, an enthusiastic Knudsen informed the listeners – among them most of the Norwegian national team, among them Norwegian orienteer of the year Holger Hott Johansen, the champion from the live TV covered NOC middle distance 2005 Anders Nordberg, and double WOC silver medalist Marianne Andersen. – The estimated production price for live production from the WC race at Hovden 2007 was 1.5 – 1.6 million NOK [about 200.000 Euro], about 50-60% more than the production costs for the NOC 2005 Middle distance. This includes the use of one new and modern TV production bus with 2 control rooms and 13-14 cameras of which 2 wireless cameras on four-wheeled motorbikes to get the action to the viewers. 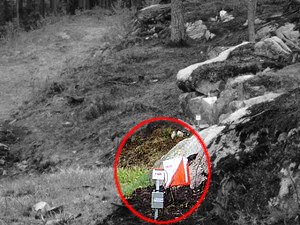 Tricks of the trade
– Let the viewers know more than the runners – that makes good television, Knudsen pointed out in another part of his presentation. This comment was directed towards the micro part of the course, where even a viewer who is totally unfamiliar with orienteering feels that he knows more than the top elite orienteers, as he knows perfectly well which control is the correct one. Knudsen’s next point will maybe hurt some of the orienteers preparing themselves mentally for orienteering on television – as I am sure this mental picture contains an orienteering map somewhere in there: – At the NOC live coverage, we showed a real orienteering map on the screen with GPS tracks on it. We will never do that again! The GPS is perfect. But we need something that is easy to understand for the viewers, and an orienteering map is not. And we need to use the same visualization in every production, such that the viewers get to know it.

Plans ditched for now
– We will not work anymore towards getting full TV coverage from the World Cup at Hovden, Petter Thoresen commented Knudsens presentation. – However, we are still working hard to get orienteering on the TV screens, Thoresen continued. A major part of this work seems to be directed towards TV channels in other countries, and based on the information Thoresen gave during the question round at the seminar, the nordic countries are the main targets. 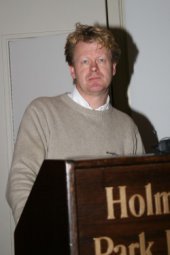 Knudsen elaborates on this: – We need 5-6 top quality TV productions from orienteering events a year to get something out of orienteering, as we have to build profiles. One event a year is not interesting. If I could give the head of the sport department at TV2 4-5 other orienteering productions “for free”, it would have been no problem to put in the 200.000 euros.

Bad timing
– June and july are bad months for television [The WC at O-festivalen is planned for June 22nd], people rather sit out in the sun in these months. April, may, august, september and october are good months – and it is important to keep clear of other sports events, especially soccer, Knudsen informs regarding some of the reasons for WC at Hovden being out of the game. – [Also,] the WC in Hovden got too expensive due to the location [about 4 hours drive from Oslo]. If it had been closer to where I have my people, the costs would have been cut significantly.

Knudsen also gave several interesting examples about the power and control TV2 has regarding soccer games in Norway – some of which really got surprised looks from many of the attendees – but not to be repeated here. 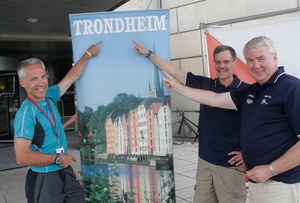 No game over
– This sport is very exciting, Knudsen said towards the end of his presentation, and made it clear that orienteering is still interesting for TV2. A proof of this is the fact that Knudsen recently has been in Trondheim visiting the possible sites for the World Championships in Orienteering in 2010. – At one of the sites they showed me, I said that this is too ugly. This does not work on television, Knudsen comments on this visit. – Another of the possible sites was perfect, with everything we need.

Compromises
Television being in this early in the process – four years ahead of the championships – must be a very new thing in orienteering. The question which is raised in this regard is how much the sport sells itself to television, and what this means for changes in the technical challenges met by the runners at the big championships. Is the worst forest chosen because the run-in isn’t pretty? Hopefully, the fact that television is inside the loop this early, makes it possible to make the best choices very early, when all options are still open. If television gets into the loop when the finish area is already chosen and most of the course is set, probably much larger compromises must be made.

Jan Kocbach is the founder of WorldofO.com - taking care of everything from site development to writing articles, photography and analysis.
@jankoc
Previous Big weekend for Norwegian Orienteering
Next World of O Maps: Finally there for you