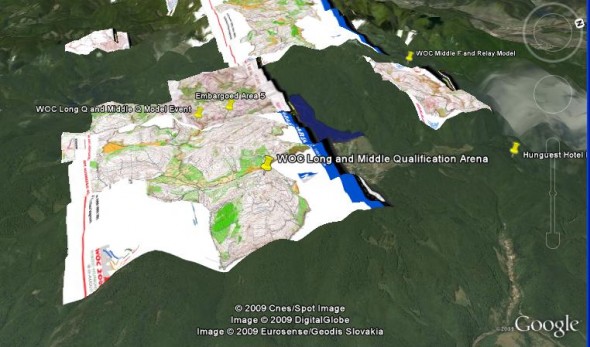 Fly through the areas where the World Orienteering Champs will be decided the coming week – and see what kind of hilly challenges the best orienteers will face! Below a video from Google Earth is embedded which includes old maps of embargoed areas and traning areas – and you can also open the maps in Google Earth yourself and take a look.

The terrain for all competitions except for the long final and the sprint is described as non-typical karst with a small number of negative features and many point objects. The terrain is quite hilly, and the competitions will be physically though. For the sprint, the terrain is describes as semi-urban with many paths and some erosion features. The long distance final is the most special terrain – with many negative features and quite stony.

Here is what Team Canada writes about the terrain:

The terrains are mostly very open and runnable hills that are big and steep. The limestone composition of the mountains means that there are areas of stony ground near the tops of hills and ridges that influence route choice. The mapped rock features (boulders and cliffs) tend to be smallish and so most of the navigation is by the major contours. [From Team Canada Orienteering Blog]

Follow the action in at the World Orienteering Champs through Twitter. Below the latest Tweets for #WOC2009 are shown in the LiveBlog. Your tweets including the hash-tag #woc2009 will also show up below.

Jan Kocbach is the founder of WorldofO.com - taking care of everything from site development to writing articles, photography and analysis.
@jankoc
Previous WOC 2009: All you need to know
Next WOC 2009 Middle Qual: Live from 10:00 CET