EOC Long: Gold for Niggli and Hubmann (with map) 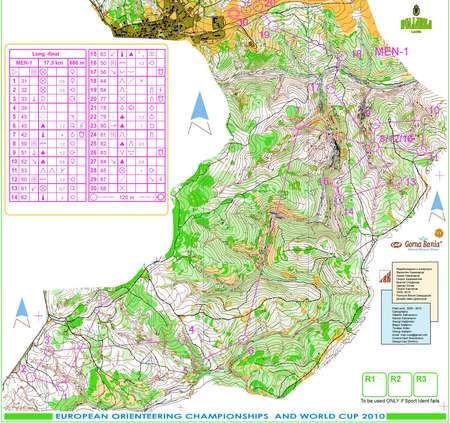 Two more Swiss Gold medals in todays demanding EOC Long distance – 5 out of 8 Gold medals went to Switzerland in this years European Champs. Nobody could beat the time early starter Daniel Hubmann set – in the end Phillipe Adamski was the closest. In the womens class, Dana Brozkova had a very strong race, but  it was not good enough to beat the “impossible” Simone Niggli.

Andrey Khramov was caught by Hubmann early with 6 minutes, and they were together for most of the race. Khramov was DSQ’ed, but the time would have been good enough for a 4th spot.

Some comments from the runners:

Hubmann: – I had also mistake – maybe one minute in the butterflies. Something I was wondering if I was fast enough, but then I thought it was long and hot. I thought it was good to be able to push at the last loop.
Adamski: – My legs were quite good this morning. Maybe I slowed down a little in the last loop, but I didn’t make any mistakes. I just followed the red line. It doesn’t feel like a medal race, but like a good race.
Nikolov: – OK race. Stops, not mistake. The beginning and end of the course was typical Bulgarian terrain. But in the middle of the course it was not typical – I didn’t know how to orienteer – what to look for and so on.
Niggli: – It feels great. Long distance is always very special. After yesterday very motivated for today. I did make two big mistakes in the beginning, but I knew I could still make a medal.
Brozkova: – I didn’t make any big mistake, but some small ones. But that usually happens on these long courses in this weather. I heard that I was running well, but not that it was that well. I was surprised that it was this good race. In some parts it was really warm, but I like this terrain very much.
Jansson: – I’ve made 5 great races and 2 OK. In the beginning my legs felt too good – I made some mistakes. Simone caught me after the long leg, but I still thought I could make a good race.
Jurenikova: – 5th. For the first time among 6 best at big champs. Would not believe my performance is enough for it. Many small mistakes.

Minna Kauppi did not start the race. Thierry Gueorgiou DNF’ed due to back or stomach problem (some problems with translations from the Bulgarian speaker by the participants of the LiveBlog).

Comment: A good thing with the 3 minute start interval – if not grouping would have been even more important for the final results. Looking at the courses it looks like the spreading method was not optimal. There is one interesting long leg, for which there is a webroute. Hubmann was fantastic in the butterflies, despite his claimed 1 minute mistake he was very fast in this part of the course. It will be interesting to get the splits.

LiveBlog: Replay it below