Route to Christmas 2017 starts with a Boom: A 2.5 kilometer long challenging leg in mountain terrain from the Norwegian Championships Ultralong – a course which recently placed 4th in the “Course of the Year 2017″ contest. The chosen leg is the 6th leg from the women’s elite course.

The men also had a similar leg, but the women’s leg is chosen here as it has some interesting aspects which the men’s leg doesn’t have. The men’s leg is provided in the analysis along with routes of top athletes, though. Some background information about the terrain: The terrain is on the west coast of Norway – and the marshes were quite wet after a rainy period. The marshes are still quite runnable, though. This is mountain terrain, and most of the leg has very little vegetation. The below picture is from mid-way on the leg. 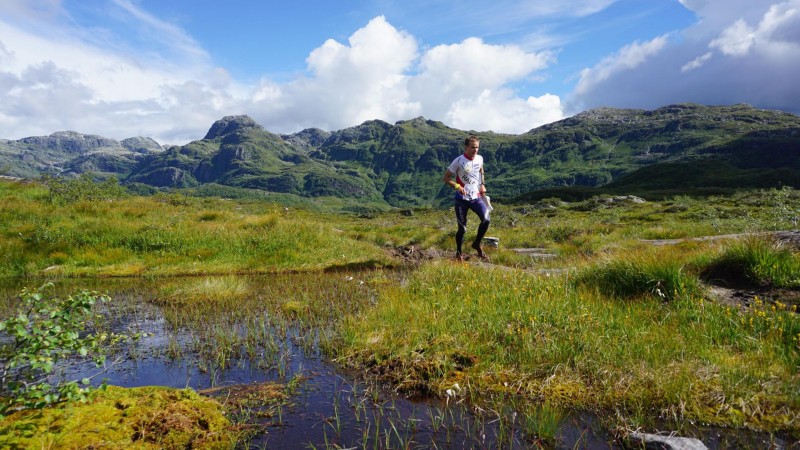 Now over to the map and the leg. The leg is as usually first provided without routes – you may take a look at it and think about how you would attack this leg (if the image is too small, you may click on it to get it larger). 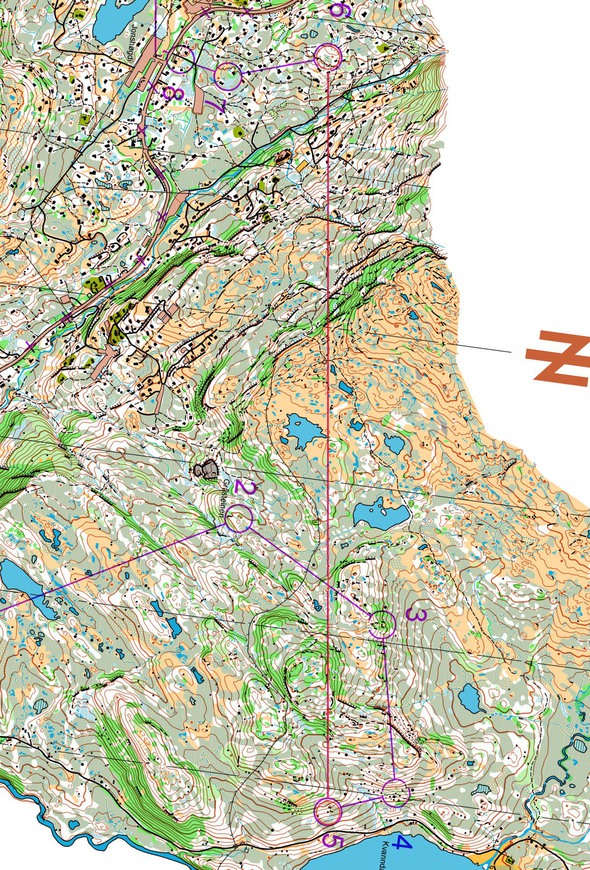 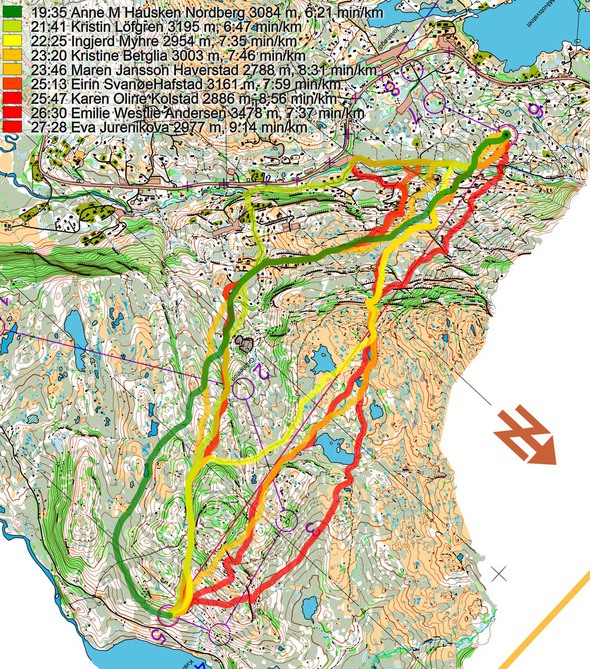 As you can see, the eventual winner Anne Margrethe Hausken won the leg with more than 2 minutes to Kristin Löfgren. We’ll get back to Hausken vs Löfgren (both running to the left), but what is definitely clear here is that going to the right (or even straight) out of the control will lose you significant time. For the women several minutes, for the men less due to a different control placement which made it a bit less worse to go straight.

Now, comparing the alternatives to the left, we can look separately at the first third of the leg where Hausken runs left and all others go more straight (up and down). Here there is no significant difference between Hausken’s choice and going straight – Hausken could probably even have gone a bit faster going straight (but she now saved some strenght).

Comparing Hausken to Löfgren (see below), it is clear that Löfgren has approximately the same speed as Hausken, and that Löfgren’s route seems to be nearly as fast as Hausken’s – maybe even faster. However, Löfgren’s execution is unfortunately not the best, losing significant time three times during the leg by not orienteering as carefully as the terrain demands. The last third of the leg where Löfgren (as the only GPS-tracked one) went down to the road would probably have been just as fast – or faster – than Hausken’s choice if she had used the paths instead of going down the cliff. 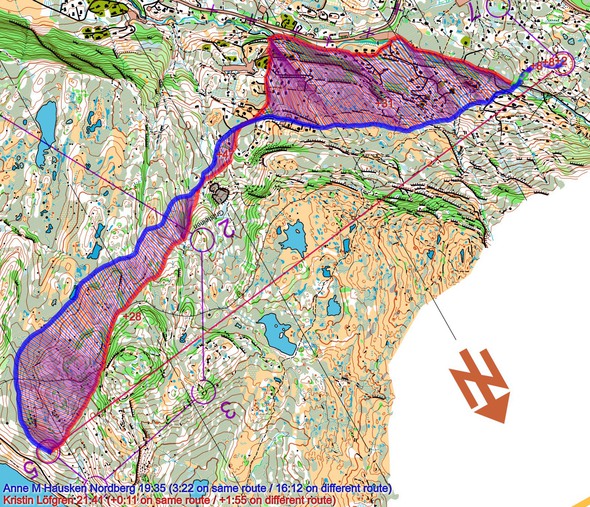 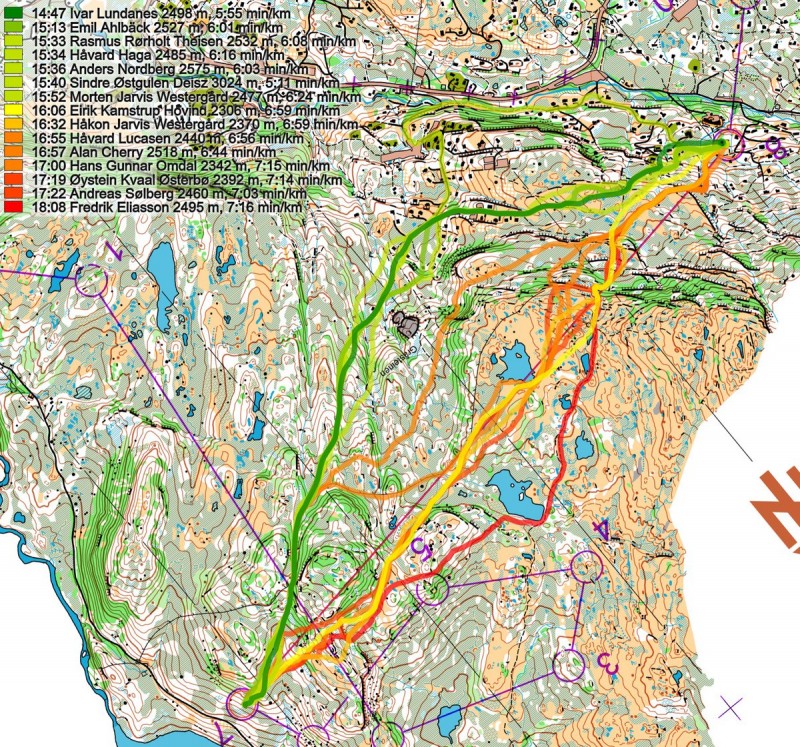 Comparing Lundanes and Deisz (see below), you can see that Deisz loses 47 seconds by going down to the road – BUT due to the placement of the control he has to climb up again to the control. 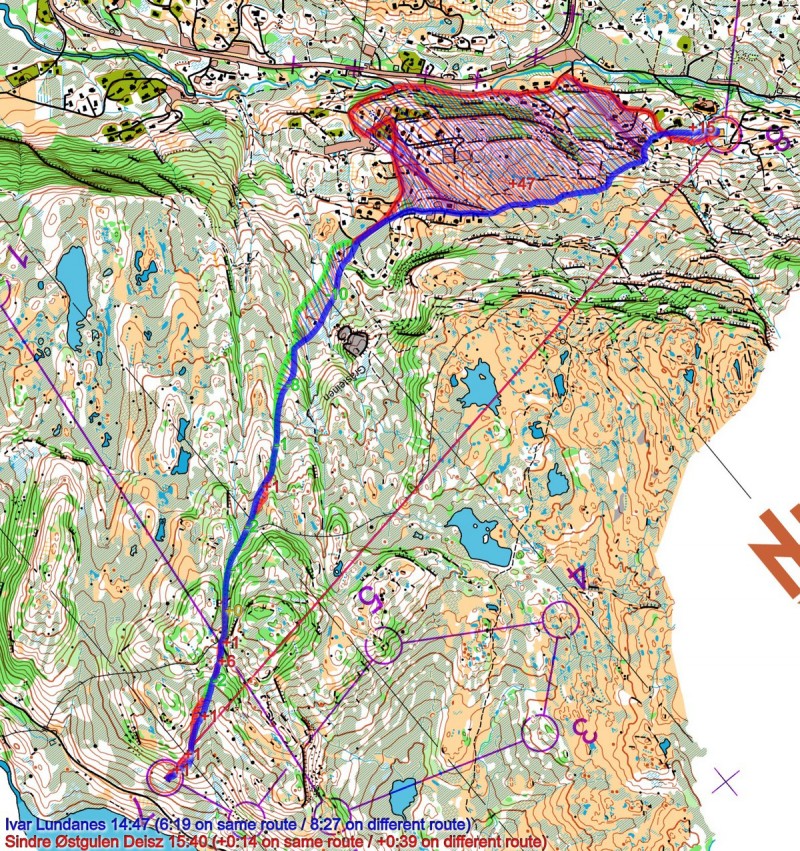 A density map of some of the ones who have drawn their routes so far will be provided below. 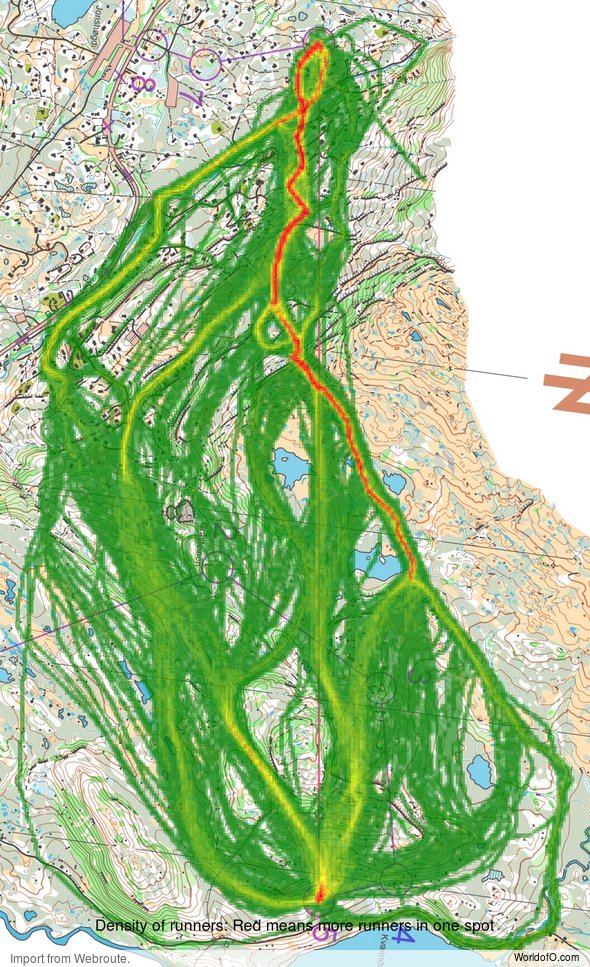 Jan Kocbach is the founder of WorldofO.com - taking care of everything from site development to writing articles, photography and analysis.
@jankoc
Previous Who did the Orienteering Achievement of the Year 2017?
Next Route to Christmas: Day 2 2017