Today’s leg in Route to Christmas is a long leg in Swiss alpine terrain – leg 5 in the M21 course from Swiss Champs Long distance. Thanks to Julian Bleiker and Peter Clerici for the tip.

The leg is as usually first provided without routes – you may take a look at it and think about how you would attack this leg (if the image is too small, you may click on it to get it larger). Some words on the way from Julian Bleiker: I think, it was quite tricky to make a good decision after some shorter downhill controls in the steep slope after the start (Editors comments: Looking at the GPS, several runners stood 20-30 seconds at the control point before deciding). Generally, the forest was quite fast runnable, there was mostly no underground vegetation and a great view. As you can see, there were quite many open areas, they were also very well runnable.

So, what is your choice? 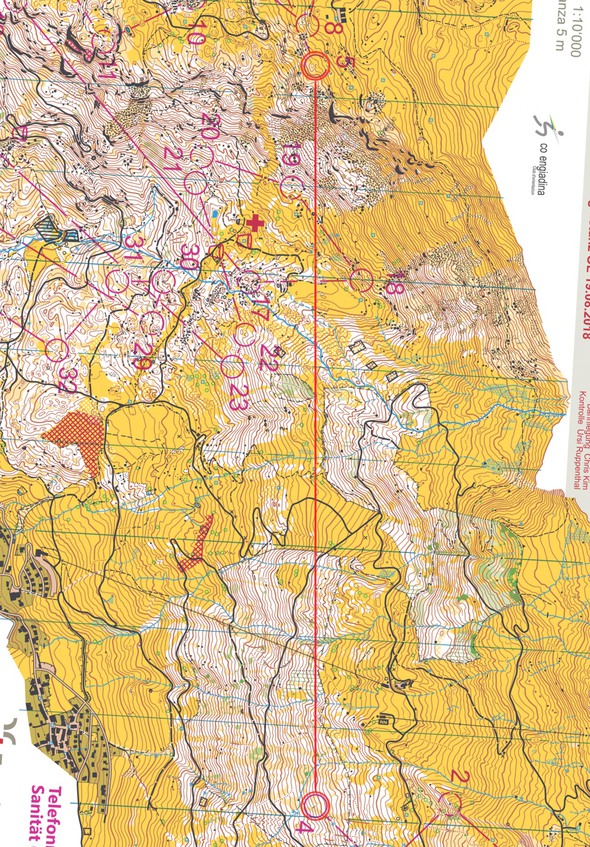 Then you can take a look at how the runners have solved this leg below. For the fastest runners the times given are actual split times, for the remaining GPS-times have been used (less accurate). Note that to complicate matters a bit, the route of the fastest runner Matthias Kyburz is missing in the GPS-data – his time was 20:27, more than 40 seconds faster than Pezzati. Kyburz did was however kind and provided his route (see the illustration below in blue). 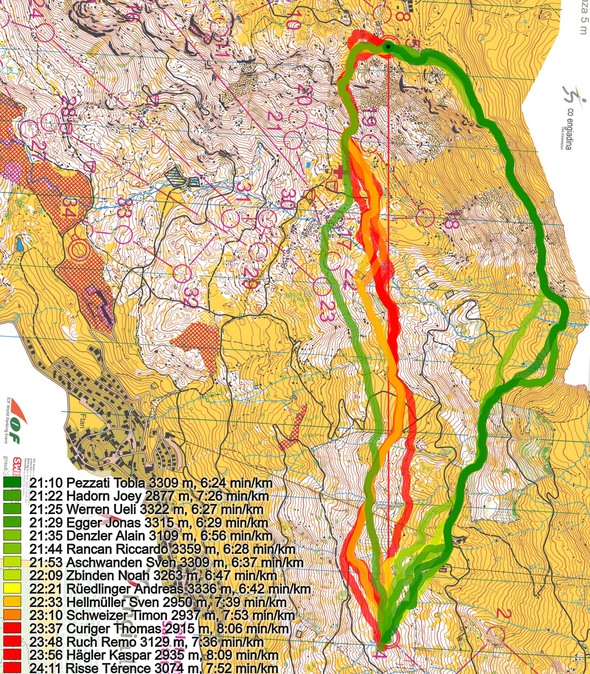 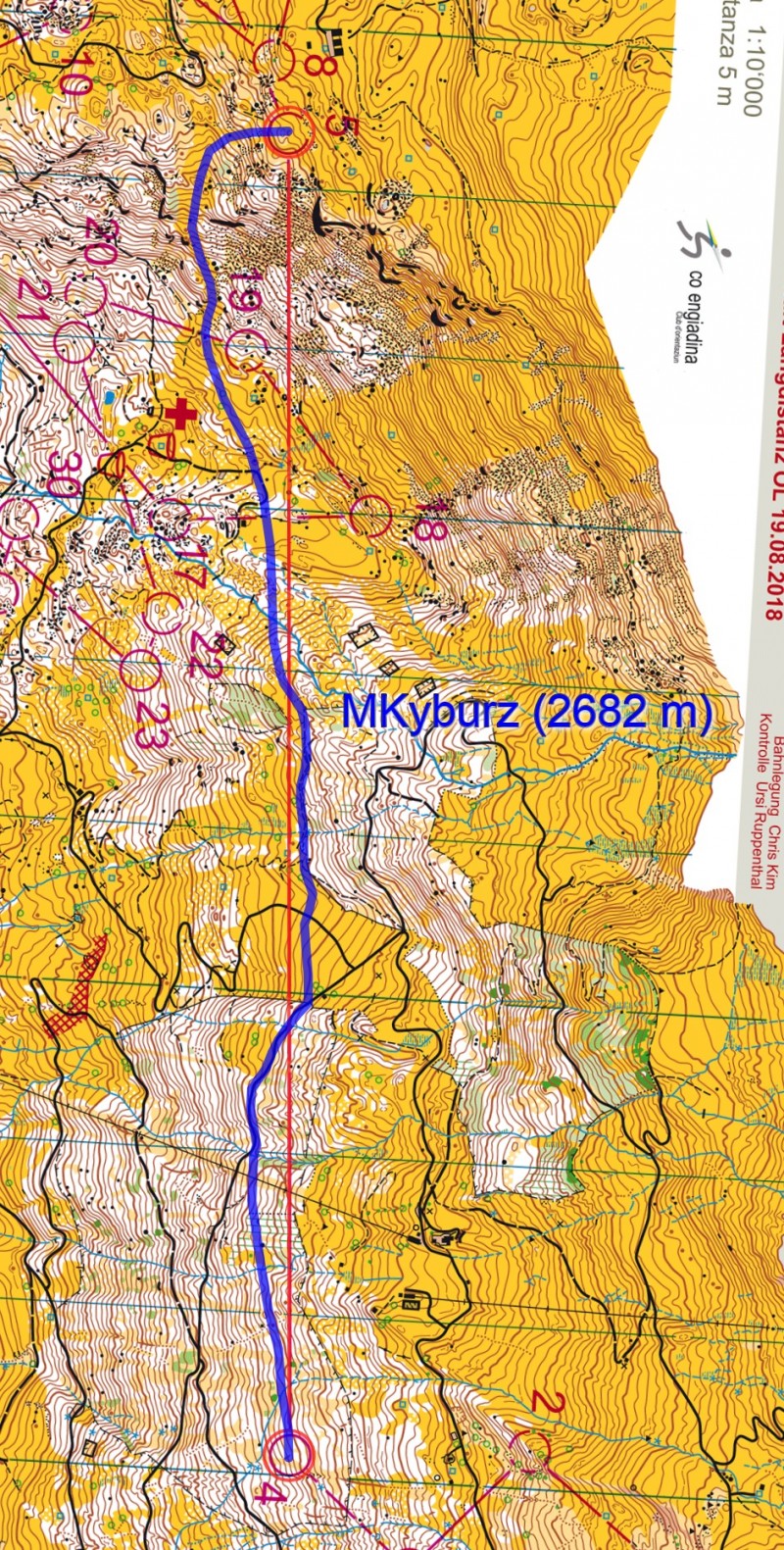 Here also the routechoices in distinct colors per routechoice. Kuburz’s route would be among the green here. Note that Florian Schneider also misses GPS-data for part of the leg, but at least here you can see that he tries a rather direct (and very tough) route which loses him significant time. 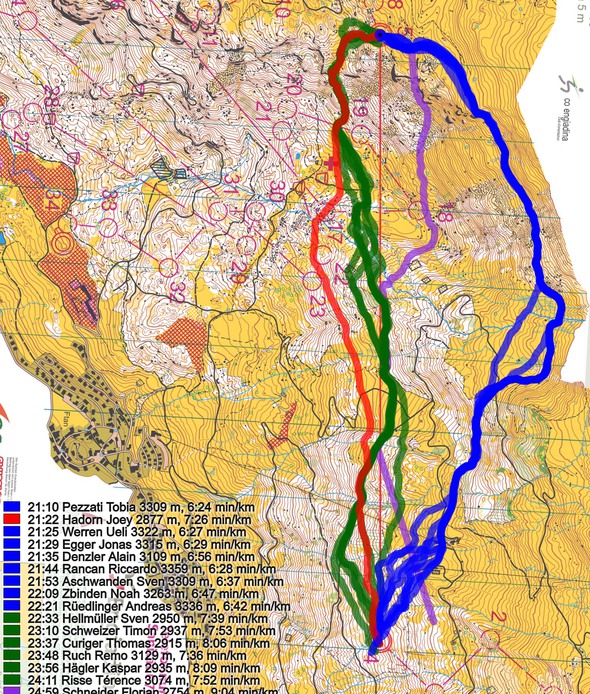 Then a quick description of the alternatives from Bleiker:  There was one option to run to the north and use the small hiking path (with quite a lot people hiking there as it was a wonderful sunny day in the alps; editors comment: Blue on the map above). There was the option to use the whole length of the path or to cut a little bit just after the second bigger street in the middle of the leg (the so called “Hackerroute” from some juniors and just reach the small path before it starts to climb through the more rough terrain. The second main option was to follow more or less the line and use some forest streets and small paths in the slope, then cross a little bit above the medical and water station and climb up to the control from there. One runner, Florian Schneider also followed the red line even more and crossed the very stony area just under the control.

The main takeaway from this leg should be that you can run this leg very fast on a straight route if you are strong and execute the leg well, but for most runners it is better to run up to the small path where execution is easier and most (fit) runners can run a quite good time. If you are Matthias Kyburz you can get away with a straight option as well, but at a cost… Kyburz was so kind to give some comments along with his route on request:

– I didn’t prepare this competition at all, as it was one week after WOC. So I wasn’t prepared for long route choices as some other runners who studied  route choices [ahead of the competition were].  That is why I basically never saw the upper route. This [the upper] seems to be clearly the best, not the one I took. Especially considering that it was a long and tough long distance. You could save a lot of energy if you would have taken the upper route. When I was at the bottom of the ski slope (below control 19) it was just crazy to see how steep it was and how far up we had to “walk”. I guess this climb “killed” many that day and basically the battery was empty after that climb (we are at 2000 meters above sea level). And from there it was a long way to the finish!  But the terrain and the view was breathtaking!

As always, any comments are very welcome!

Note that juniors and women had a similar leg, and the results are quite similar there as well. 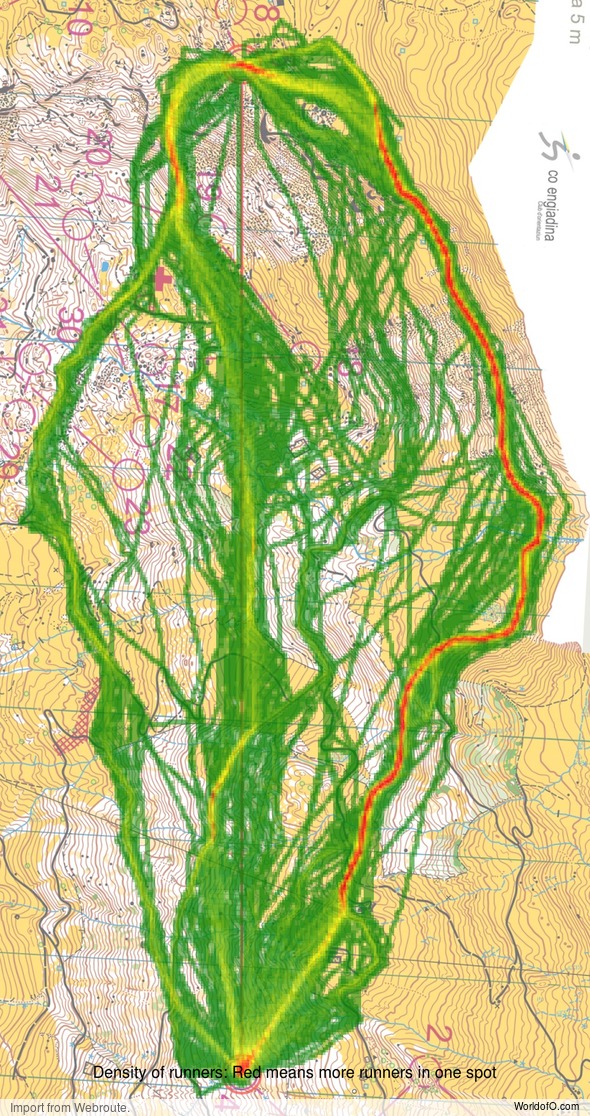 The Route to Christmas series is a pre-Christmas tradition at World of O – giving the readers the opportunity to do one Route Choice Challenge each day from December 1st until December 24th. If you have got any good legs in GPSSeuranta or 3DRerun from 2018-competitions – or old forgotten ones which are still interesting – please email me the link at Jan@Kocbach.net, and I’ll include it in Route to Christmas if it looks good. Route to Christmas will not be interesting if YOU don’t contribute.

Jan Kocbach is the founder of WorldofO.com - taking care of everything from site development to writing articles, photography and analysis.
@jankoc
Previous Route to Christmas: Day 23 2018
Next 10Mila 2019: All You Need To Know!