Lean back and get some coffee for one of the absolute highlights of this edition of Route to Christmas! Today’s leg is a long leg from the Swedish Junior Championships Ultralong for juniors – with no less than 310 combinations of partial routechoices!

Thanks a lot for Simon Hector for providing the tip, and for course setters Per  and Matthias Kallhauge for a BIG analysis – even translated to English. Big thanks go over Sweden for this one. If you find the terrain interesting, note that this is the neighbour terrain of 25-manna 2022 – might be worth a visit. The leg was the exact same for all junior categories (D/H18 and D/H20). 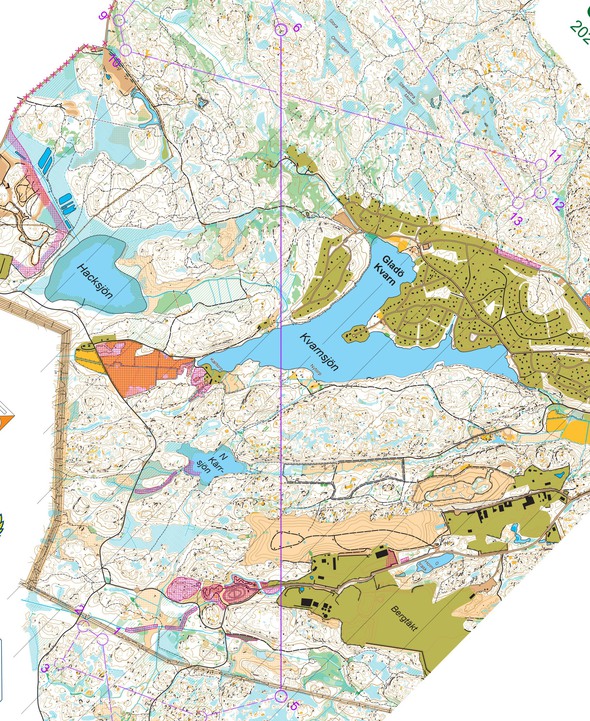 Then you can take a look at how the runners have solved this leg below. We start off with the usual World of O illustration with color according to time – for only the men. 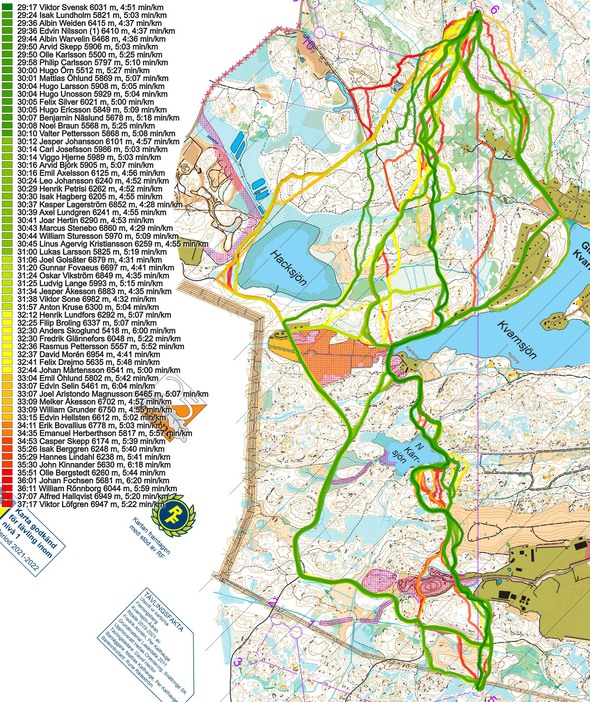 Including also the women gives this picture: 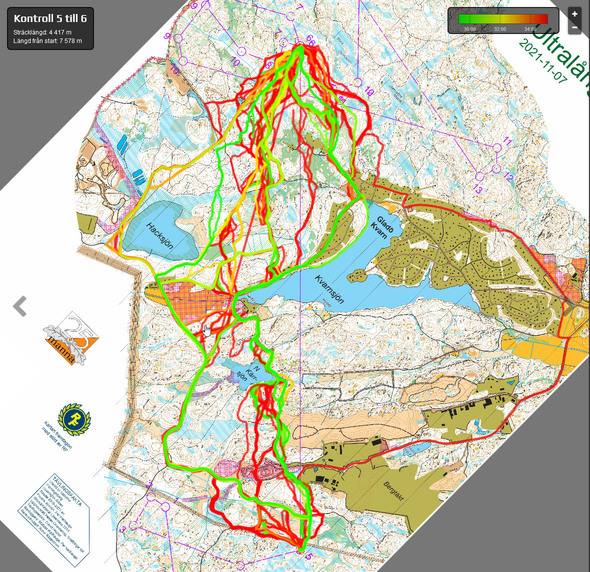 Next, I put up the first part of the analysis by the Kallhauge brothers:

None of the runners with the best time have managed to choose the best route in combination with a perfect execution.

If a runner chooses several consecutive poorer route choices, the time loss should be added for the individual components in order to get the total time loss. The best way is partly different for men and women. None of the runners with the best time have managed to choose the best route in combination with a perfect execution.

Here are first the alternatives with time differences for women, and then the same map for men: 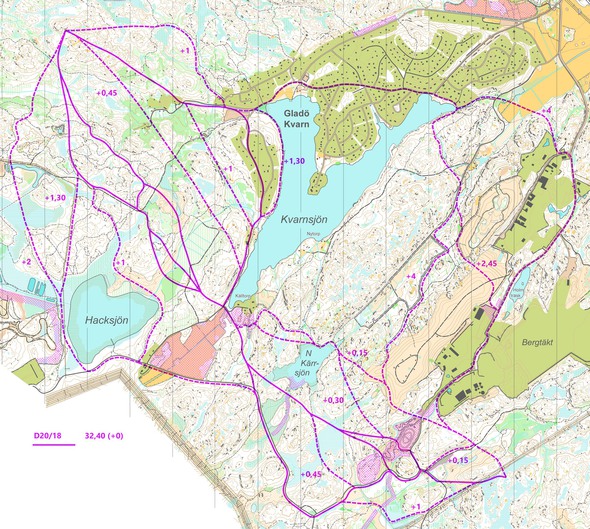 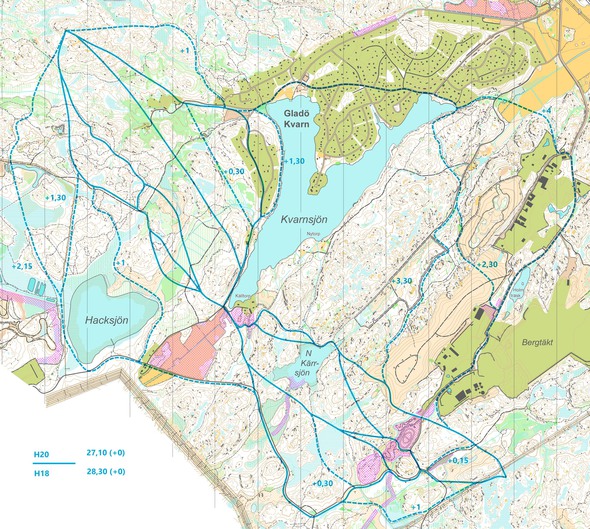 Then the second part of the analysis:

The runners seem to have acted much as we thought in advance. First they look close to the line and see the hole in the forbidden areas that leads north of Kärrsjön. Then they look wider, reject the route choices east of Kvarnsjön, but consider the dirt roads to the west, despite having to run 1 km crooked road 90 degrees towards the line. These two variants have been the main route choices used on the first part of the route. It is still surprising that no runners have chosen the route south of the speedway track and south of Kärrsjön, which we saw as a very good option.

From Källtorp, which most runners passed, there are two best route choices, either the long right turn using the roads or variants of straight on through the forest. For the straight on option, many runners chose to start on the road along the lake side and then climb the hill, which is less good than climbing the hill right in the beginning. Also for the path / road option it’s important to make all decisions right, if you for instance try to avoid the hill with the houses at the northern part of the lake and choose the path along the shore of the lake you will loose 1-1,5 minutes.

For the straight on option, many runners chose to start on the road along the lake side and then climb the hill, which is less good than climbing the hill right in the beginning.

Below are some of the standard autOanalysis plots which shows you a comparison between Viktor Svensk and some of the other alternatives. As you can see in the first illustration, Svensk would have been very close to the ideal time by taking Lagerströms route on the first half of the leg (except the first few hundred meters) -saving him 2 minutes of time. The second part of the leg Svensk is not far from the ideal route choice, and his running speed is among the fastest in the race. The second figure shows how Svensk might have saved some seconds in the last part, getting the time down some additional seconds. 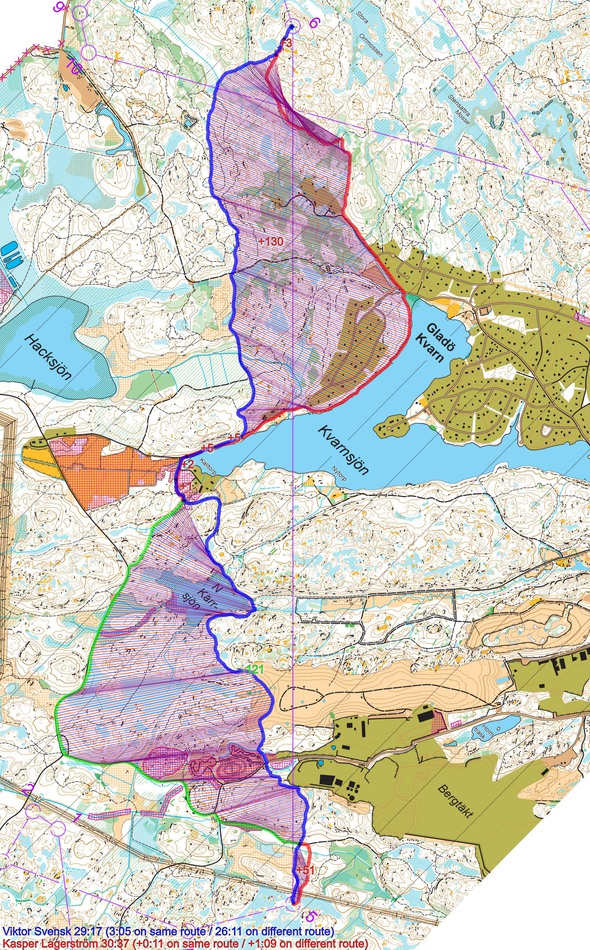 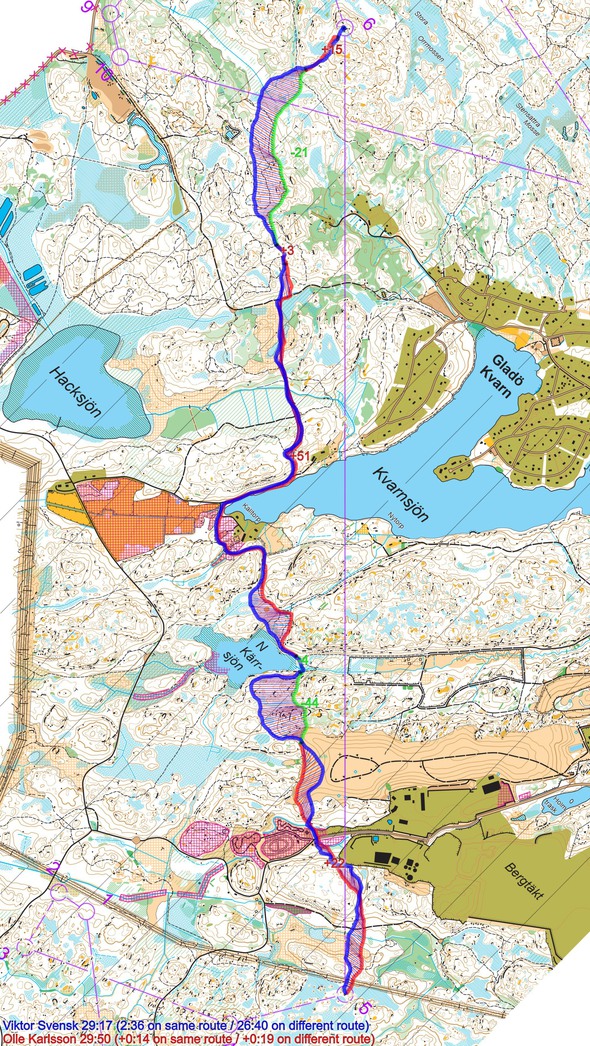 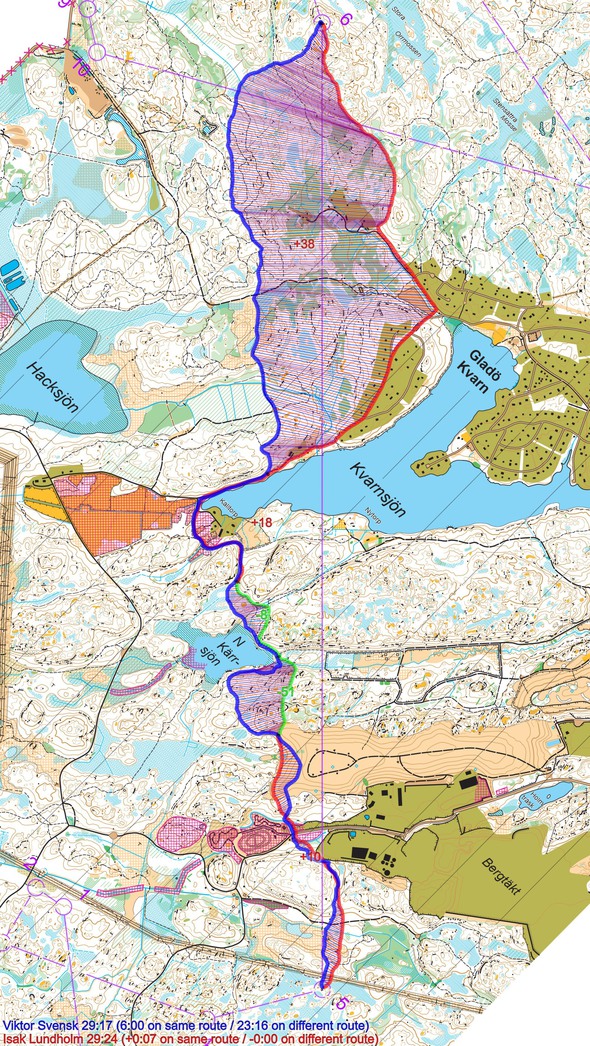 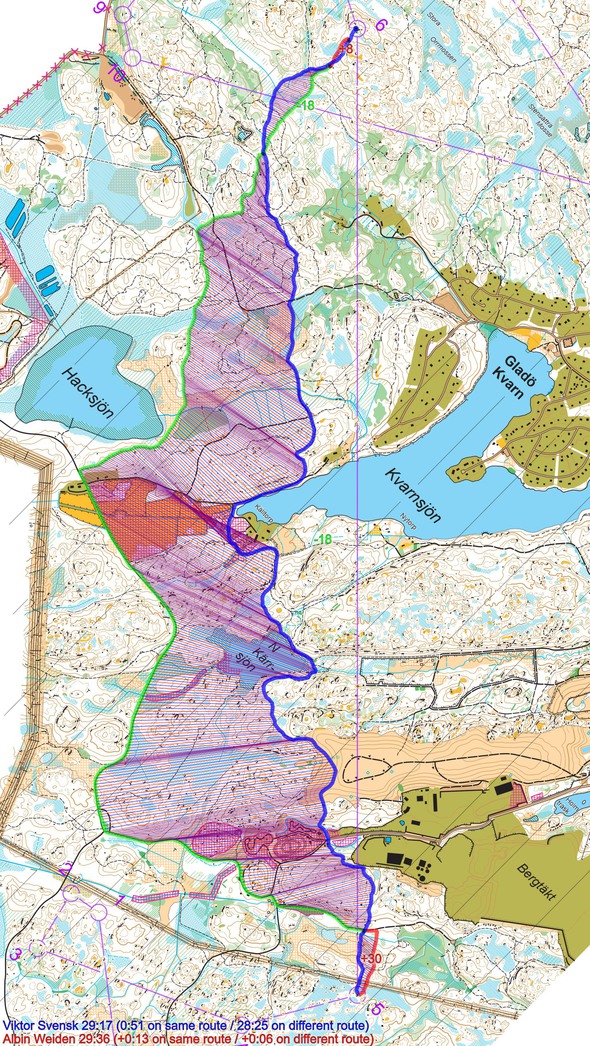 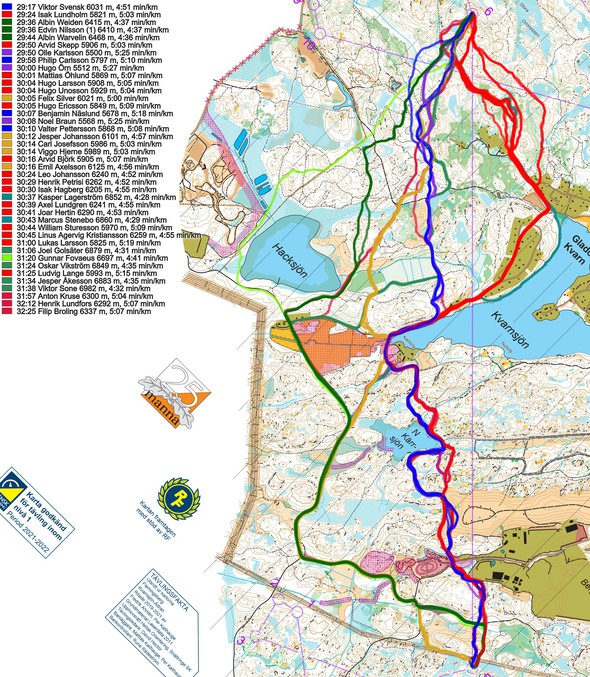 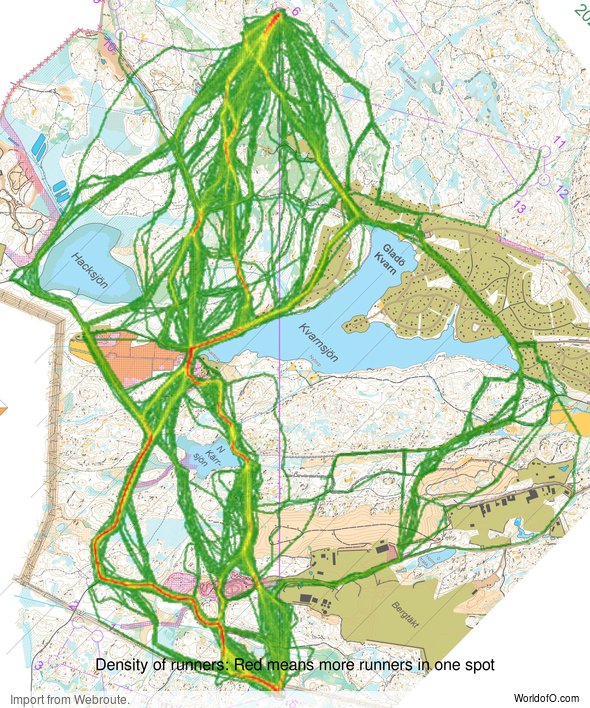 Jan Kocbach is the founder of WorldofO.com - taking care of everything from site development to writing articles, photography and analysis.
@jankoc
Previous Howald’s Course of the Year: Idre Fjäll & Czech Republic 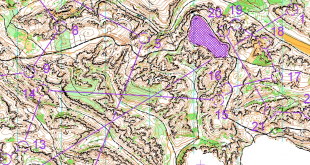 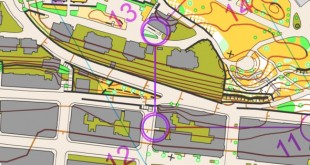 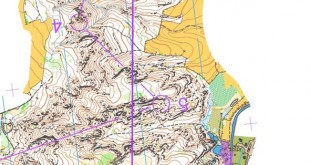 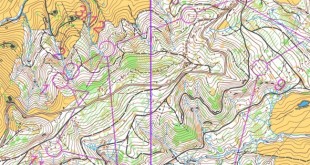 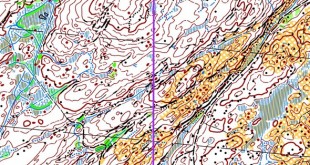 Today’s leg in Route to Christmas 2021 is another quite long leg in Nordic terrain – this ...