At the final day of Route to Christmas 2019 we travel to Norway and take a look at two legs from the Norwegian Championships Long distance. Both legs are from the M21E course, and both are long legs in hilly, marshy terrain with some road/path options.

With this I also wish everybody Merry Christmas – and thanks for following Route to Christmas, and contributing by drawing routes and suggesting new legs!

The legs are as usually first provided without routes. We first present the first of the two legs – you may take a look at it and think about how you would attack this leg (if the image is too small, you may click on it to get it larger): 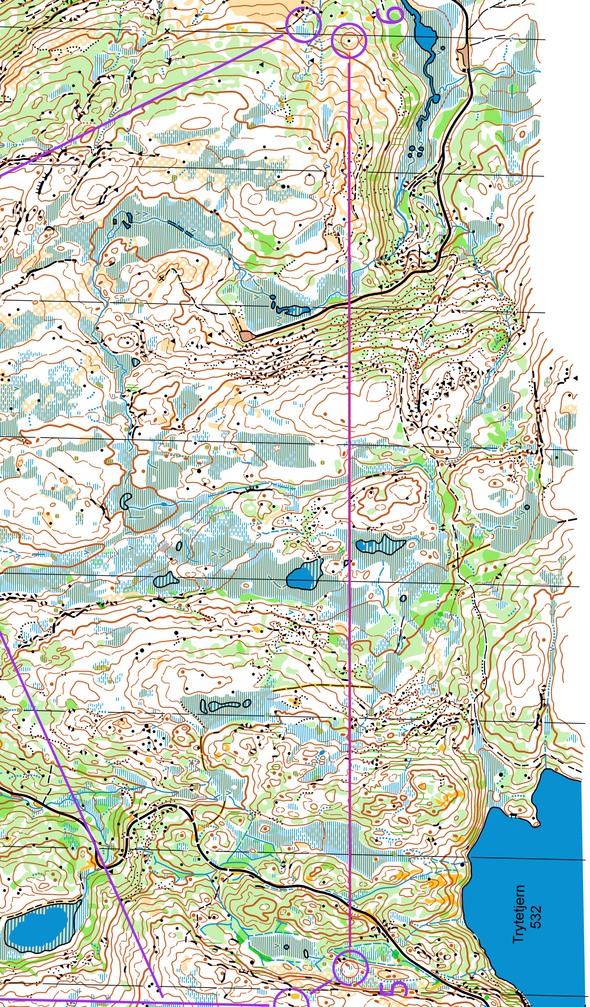 Then we present the second leg. Again you can choose to attack the tough terrain with barely using the roads/paths, or you can use the roads/paths as a central part in your route choice. What is your option? 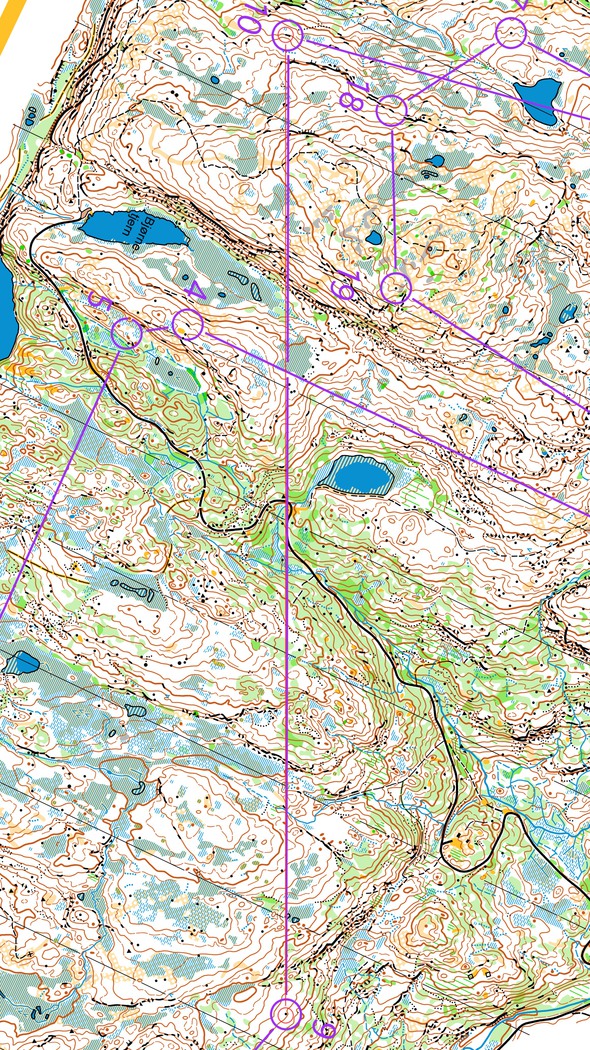 Again you can draw your own route using the ‘Webroute’ below. Think through how you would attack this leg, and draw the route you would have made. Some comments about why you would choose a certain route are always nice for the other readers.

Then you can take a look at how the runners have solved the legs below. We start with the first leg to the 6th control. Here the best choice seems to be a variant were you start out straight, and then go to the right in the second half of the leg, exploiting the road on the last part of the leg. Going to the right down to the lake early on the leg (Heimdal’s choice) is around 90-100 second slower than going straight. On the very last part of the leg, you can also see below that it is better to go down on the road and up again than to try to stay in the slope and take the control from above (although the time difference is not so big if you execute well). Going to the left of the line seems significantly slower, partly because going down the steep hillside is slow, and partly because you have to take some extra climb midways on the leg. 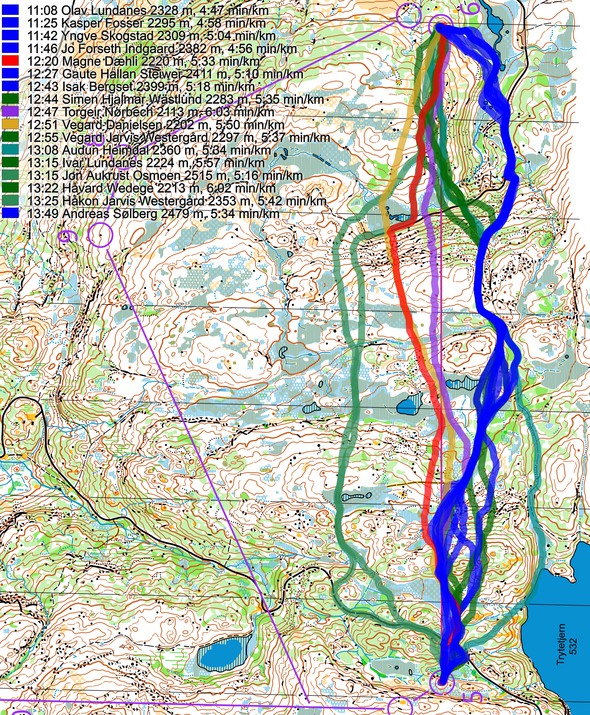 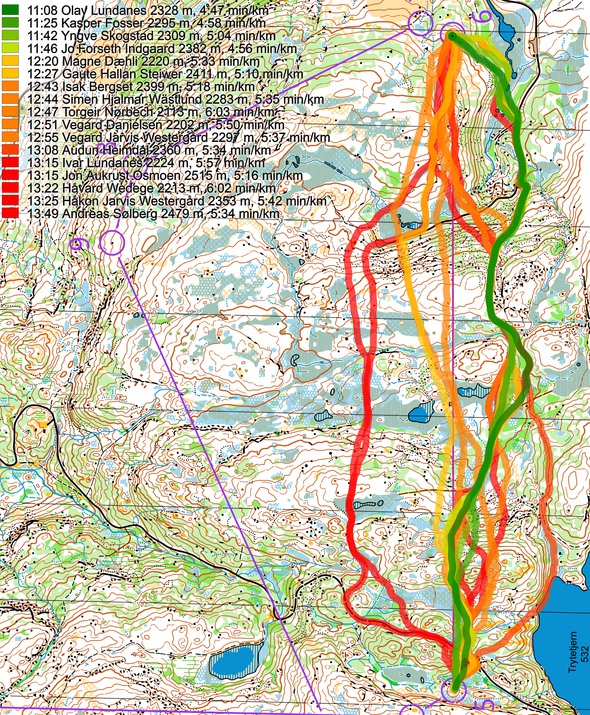 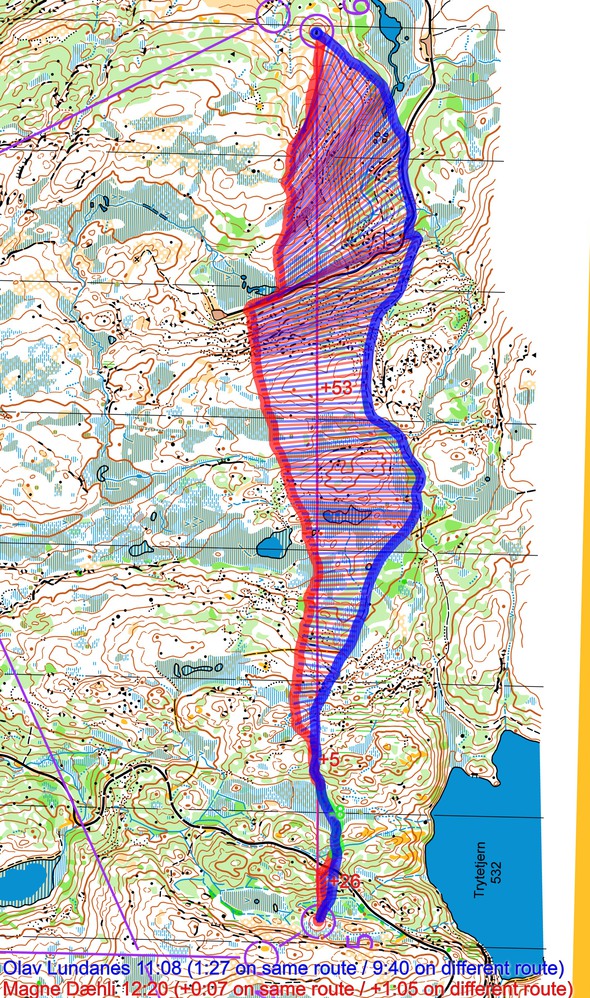 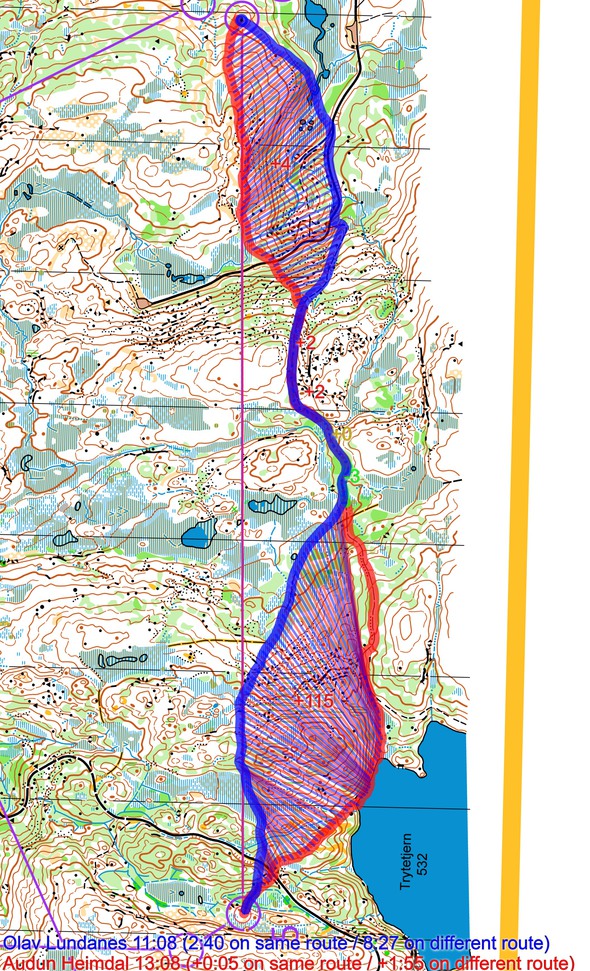 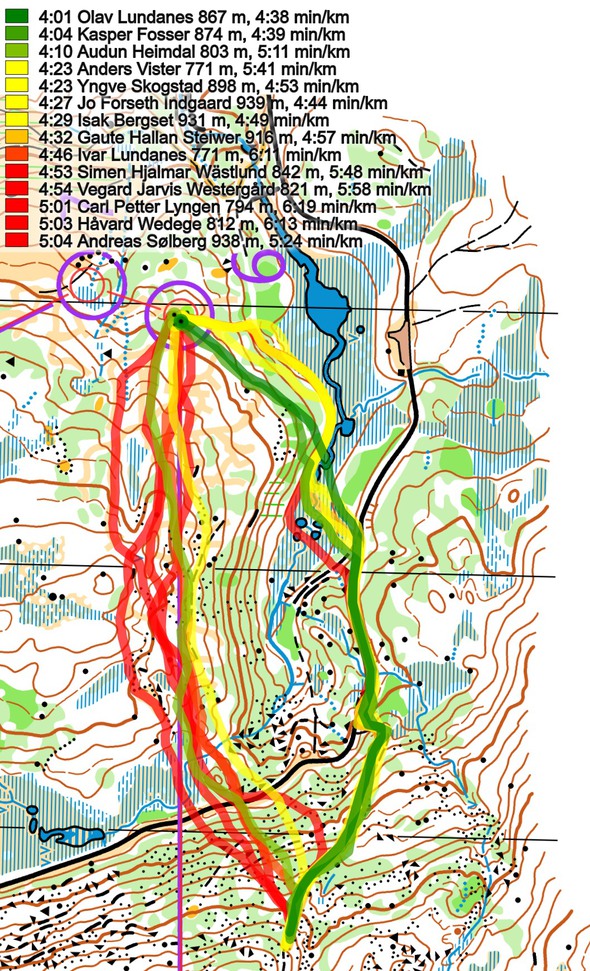 The second leg is also a very interesting because there were quite many distinct routes chosen, and the routes cross each other on different places. For example, Olav Lundanes and Kasper Fosser ran the same route (on the road to the right) on the first part of the leg, but split up on the second part with Lundanes running straight and Fosser around on the road. Here Lundanes was clearly faster (30-40 seconds). Comparing Fosser with Yngve Skogstad who ran far to the left (in the terrain the first part of the leg, then on the road), Fosser is clearly faster than Skogstad on the first part of the leg where they run different routes, but is behind on the last part where they run the same route. In summary, Lundanes runs the fastest time here, but Fosser’s route on the road most of the leg is probably fastest for most runners, and Fosser could probably have been some seconds closer to Lundanes with an excellent execution all the way. 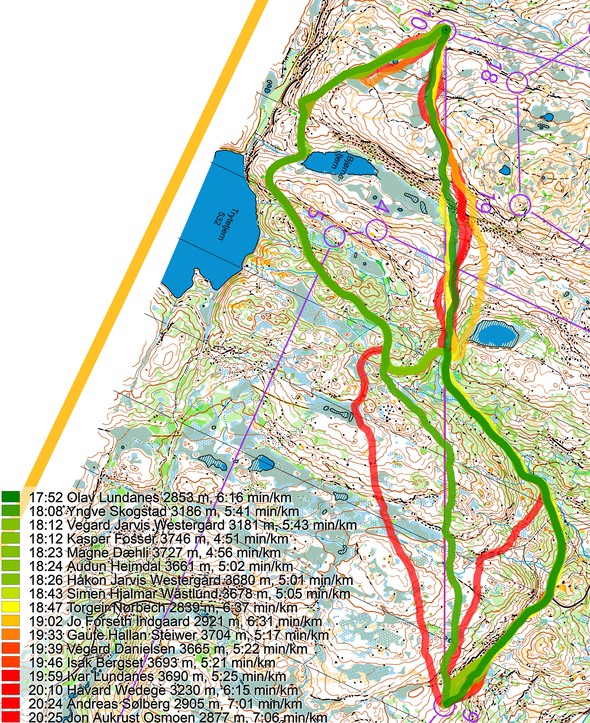 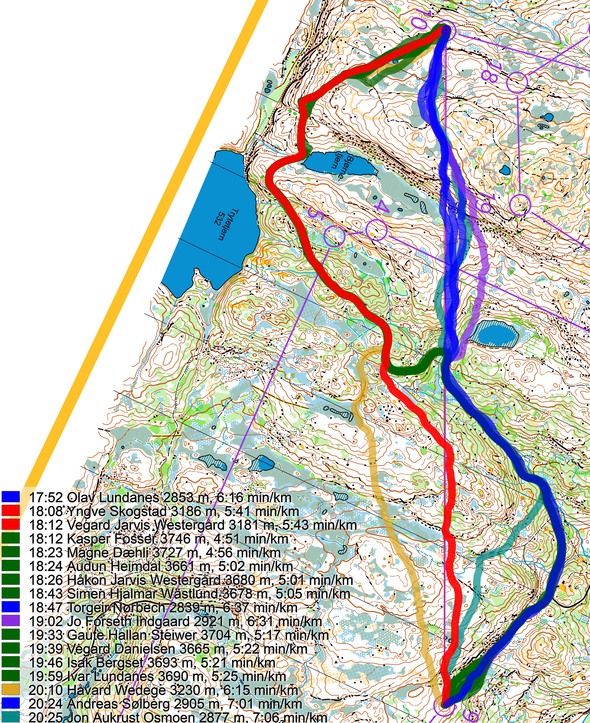 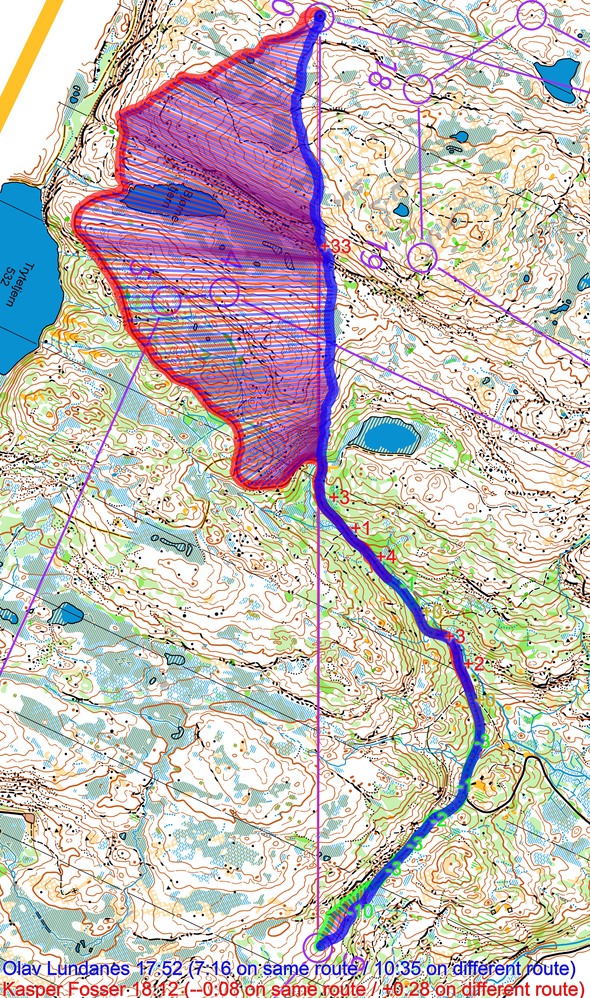 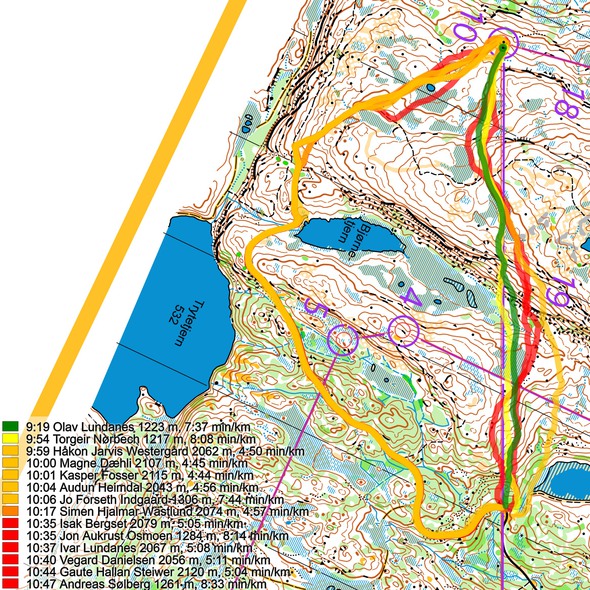 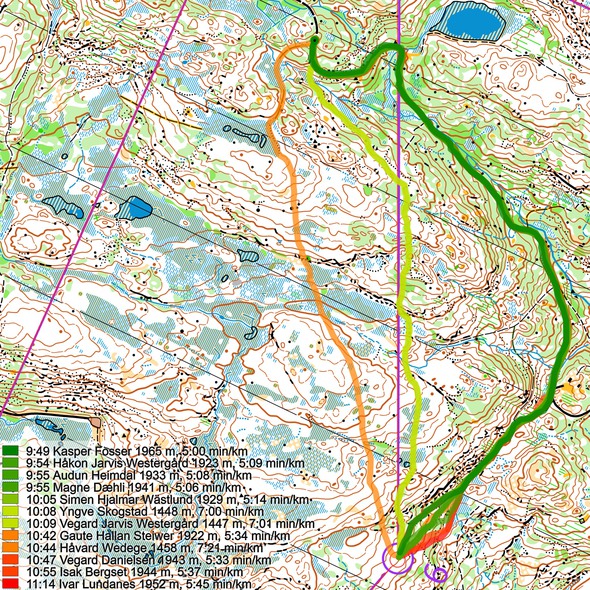 Jan Kocbach is the founder of WorldofO.com - taking care of everything from site development to writing articles, photography and analysis.
@jankoc
Previous Route to Christmas: Day 23 2019
Next Lucky voters: Check if you won fantastic prizes! 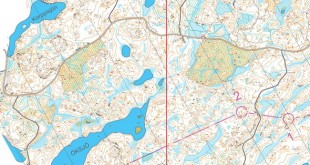