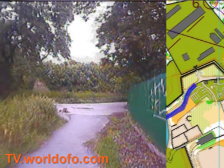 For those of you who have not had the possibility to run through the WOC 2008 Middle course, woO-TV has prepared a runthrough video of the first (and tricky) part of the womens course with a headcam. Alongside the video the map along with a GPS track is shown in a split screen.

Note that the runthrough was done after the competition, and it was therefore rather dark, and some of the controls were already removed from the forest. No music this time either – only the breathing of the headcam operator. Thus, this is considered another video piece for the specially interested orienteer. Still – it is nice to see exactly what kind of challenges the competitors met when comparing with the map.

Jan Kocbach is the founder of WorldofO.com - taking care of everything from site development to writing articles, photography and analysis.
@jankoc
Previous Best ever for Czech Republic, France and Slovakia
Next WOC Relay: Gold for Finlands women

The runner chosen for November is Anne Margrethe Hausken from Norway. Hausken was a very ...