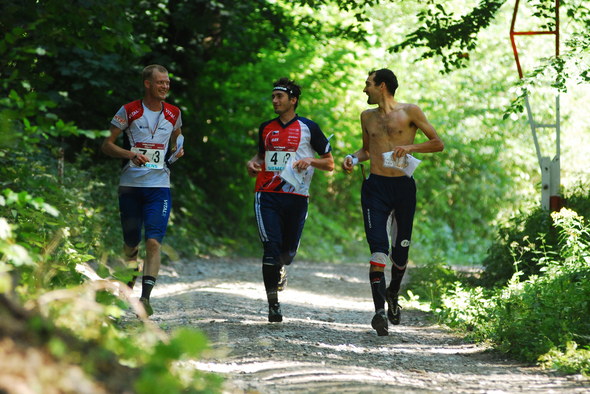 Thierry Gueorgiou, Martin Johansson, the Secretary General of WOC 2009, Matthias Merz, Simone Niggli and hundreds of orienteers have written their opinion about the WOC 2009 relay. The orienteering community also got the possibility to give their opinion through a poll. Now it is time to wrap it all up – and get on with the next races!

Let us start with a quick recap of the facts:

How it happened: The Stories from Involved Parties

Here some of the stories from the involved parties about how it happened (Note! Emphasis and translations are done by me). Follow the links to get the full stories:

Reactions from the involved parties about the result

Many of the involved parties have expressed their opinion of the matter. Below some of the opinions are collected (emphasis are again mine): 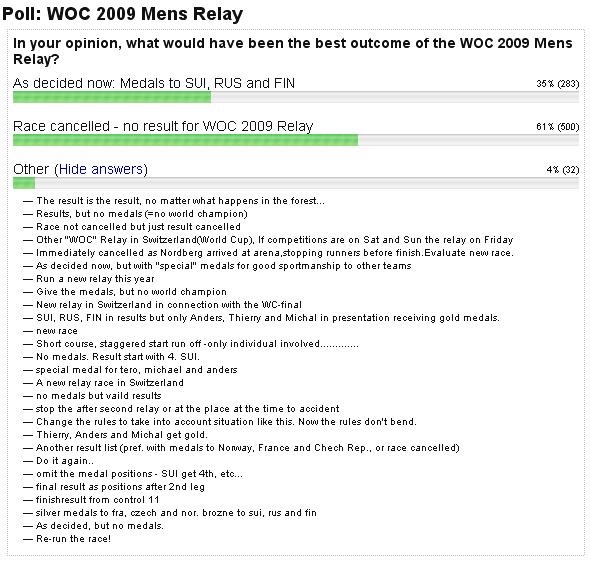 A poll was set up at World of O to see the orienteering community’s opinion. [Note! Now updated with final poll results compared to the original published article.]

The matter has also been discussed in a lot of different forums on the Internet. Below some of them are listed:

So what was the right decision in the case of the WOC 2009 Relay? All agree that Gueorgiou, Nordberg and Smola did the right (and natural) thing by stopping and helping Johansson. But should the race have been canceled or not? No matter which decision would have been chosen, many would have deemed it the wrong decision. The organizers had to decide from two options – none of which felt like the right decision.

Now the relay has two different sets of winners: On the one side Gueorgiou, Nordberg and Smola – on the other side the Swiss Team who came first to the finish. None of them feel like winners, though. The incident will be discussed for still many weeks, months and years to come – and just as nobody feels like winners in the relay, there is no decision which really feels like the correct decision.

So – let us get on with orienteering!

Most of the focus inn all the pages that have been written about the WOC Relay has (naturally) been on what happened to Martin Johansson between the 12th and 13th control. However, as some commentators point out, the decisive moment in both relays was actually at the 5th control of the last leg with control code 112 (see map extract with tracking for all men/women overlayed above) – so let us take a look at that before finishing the discussion about the WOC 2009 Relay.

First the mens relay. When approaching the 5th control, Thierry Gueorgiou of France was in the lead with around 30 seconds based on the GPS Tracking (see video above). – […] it would have been nicer if I would have seen the same thing than the mapmaker here. I was standing for more than 2 minutes with no idea where to look for the control – first time I got such feeling in a WOC race, Thierry Gueorgiou writes at his website about this incident. Johansson got a lead of nearly 90 seconds after this control – a lead which Gueorgiou and Nordberg just managed to catch up ahead of control number 12 (partly due to a big mistake by Johansson at control number 10).

In Orienteering there are always a lot of “what if’s” – and this one at the WOC 2009 Relay is one of the big ones: – What if the problematic 5th control had not been so hidden in an area where it was difficult to relate the map to the terrain for many of the runners? Would Gueorgiou have been ahead of Johansson at the 12th control? Nobody knows ; however, the 5th control was surely a very decisive moment in the relay.

Enter the womens race. Again the same control. Simone Niggli and Minna Kauppi approach the control together – about 30 seconds ahead of Helena Jansson and two minutes ahead of Marianne Andersen and Dana Brozkova. Leaving the control, there is a mass start with four of them – the only one who is left out of the fun is Niggli who after the control is 2 minutes behind the other four teams, loosing a total of 4:30 at the 5th control.

Simone Niggli writes at her webpage: – From above I run with compass down the hill, and I found that it was very difficult to see the edge of the green area. […] I run down in high spiris, but I could not find the control. Minna also started to search for the control, and because I knew that I was close to the control, I scoured the area. Soon the chasers came along, Sweden, Norway and the Czech Republic. They also wandered around, and soon I didn’t know what to do. It was no help running to the path as it was straight and would not be able to help. I also tried it with the single tree which was really close to the control, but also nothing. Suddenly I saw that the others started running determinedly uphill. I followed them a few steps – but soon understood that they were on the way to the next control. Shit – back again, and after further costly seconds I suddenly saw the control behind a green bush in a hole. A small consolation after the race were the reaction of the other runners and those who had subsequently gone to look at the control. A not 100% fair control, but unfortunately that didn’t help a lot…

My opinion about the 5th control 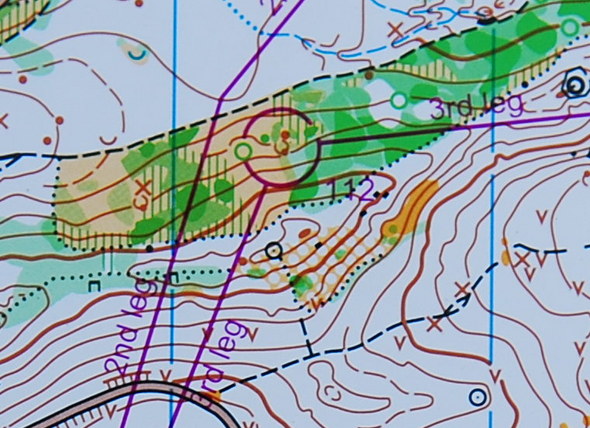 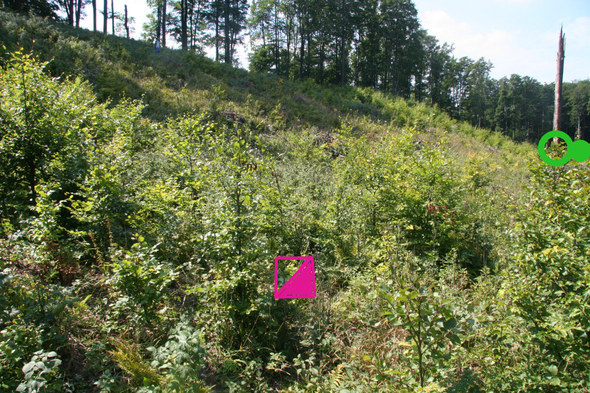 Photo: KalevanRasti.fi. – including some analysis and discussion by Jukka Inkeri, Kalevan Rasti.

I was out checking the control after the race, and actually searched for between 5 and 10 minutes before finding it – all the time searching within 30-40 meters radius. In the end I gave up, and stumbled over the control just when I was leaving as I was sure the organizers had removed the control. Well hidden in the green – but approximately in the right place according to the map. The area was full of paths going back and forth – lots of runners had obviously been searching here. The control was probably in the correct place, but extremely difficult to see…

Follow the WOC 2009 action through the World of O LiveBlog below. There is also a mobile version of the LiveBlog here.

Jan Kocbach is the founder of WorldofO.com - taking care of everything from site development to writing articles, photography and analysis.
@jankoc
Previous Fantasy World Cup: Scary securing the lead ahead of finals
Next WOC 2010 Preparations: Maps from Trainingcamps