HowTo: Convert any Orienteering map to a Garmin Map 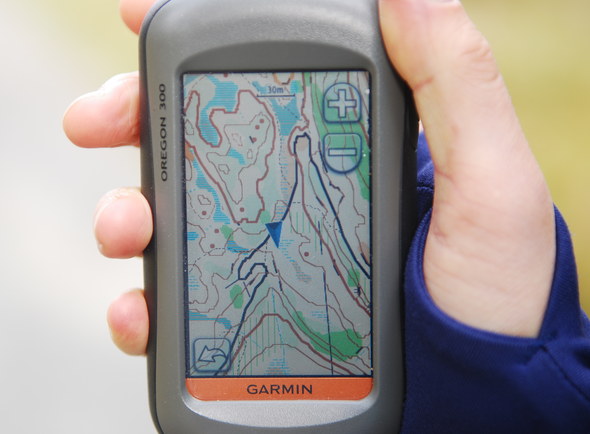 Ever wanted to get orienteering maps on your GPS device, and see exactly where you are using the GPS? Read on to see how you can convert any OCAD file to a Garmin map which you can use on your Garmin GPS unit supporting Garmin .img maps – using freely available software. On your GPS unit you can then use the generated map in the same way as any other Garmin map – showing your position on the map, aligning the map correctly, panning and zooming.

Why orienteering map on a GPS? There are several reasons why you would want to be able to use orienteering maps on a GPS receiver.

The work described in this article is mostly done while I was working in the orienteering club Varegg. In our particular case, the interest was in getting youngsters interested in orienteering – and learning them how to understand and use an orienteering map. With founding from Gjensidigestiftelsen and some funding from the Norwegian Orienteering Federation, Varegg had the possibility to buy a set of 10 Garmin Oregon 300 GPS units and develop a method to convert orienteering maps to maps which could be used on the GPS units.

The GPS units have been used – and will further be used – in activities directed towards youngsters, both to get new youngsters interested in orienteering, and to improved the map understanding of the youngsters in the club.

Another interest in the future is to work on making orienteering maps useful and accessible for people outside the orienteering community. In particular, there are interesting possibilities for the “Tur-orientering” concept when orienteering maps can be used directly on a GPS unit or especially on a mobile phone with GPS receiver. In the embedded video below you see an example of the usage of an orienteering map converted from OCAD to Garmin map on an Oregon 300 GPS unit. As you can see, this looks like a orienteering map – you get to see your position on the map, and it is possible to zoom and pan the map. You may also let the map automatically align to the direction you are moving.

In the next article in this series we will consider raster maps which you can get to look exactly like an orienteering map – these do however only work on the Oregon, Dakota and Colorado series of GPS units.

Now we’ve shown that it works – and it is time to get down to the technical details. Note that you will need an OCAD-file of the map to convert to proceed with the procedure. This gets very technical – so most of you should probably stop reading here. If you are lucky enough to have a Oregon, Dakota or Colorado unit, you may rather want to wait for the next article in this series which tells you how to use raster maps on the GPS units. The procedure is a lot easier to follow – and the map on the GPS will look exactly like the orienteering map.

Note that the method described here is kind of a hack – and can not even be regarded as an alpha version – but it has worked for me for a number of maps, and I decided to share it with everybody in case somebody want to use and/or improve it. Only the basics are included for now. If you see improvements to the procedure, please add a comment below to let people know about it. If you are trying to get things to work and have problems, please do not send me an email, but rather add a comment below as that may then help others having the same problems.

Garmin .IMG-files are vector maps. That means that each symbol in your OCAD file must be converted separately to a corresponding symbol in the Garmin map format. The problem in this respect is that there is no standard set of OCAD-symbols. Any OCAD-map may have their own set of symbols and colors, and thus for the conversion to work, you have to make a mapping for each OCAD-symbol in use on a given map. The ocad2img program lets you make this mapping in a straightforward way – but it requires some work to get it exactly right – especially for a map with many “strange” symbols. However, even for a test map with a lot of special symbols, a conversion with good visual results was done in less than 30 minutes.

Step one in the procedure is to prepare your OCAD-file. Note that this has only been tested in OCAD9.

For georeferencing the following procedure will give you a georeferenced map in OCAD 9 (although it might not be accurate enough for all purposes). I have not checked if the same procedure is applicable in OCAD 8 / OCAD 10, but the OCAD people should be able to help you out as this is a job done fairly often:

Now you have got a georeferenced map, and can continue to the next step.

The next step is to download the software you need for the conversion to work. Unfortunately I can not offer all in a single download, as I have not got the rights to do so.

You now have three zip-files. Unzip all files to the same directory, and you are ready to go. There is no need for any perl install if you don’t want to do modifications to the code.

I have now got the following files in my directory:

Not all of these files are required, but rather just keep all than erasing some of them.

When you start ocad2img, you get the following welcome screen:

Here you can read a previous config-file by pressing “Read config” (very useful later on), you can change which file to convert, and so on. The last two input fields – ID of Garmin map and FID of Garmin map – are important. This gives your generated map and symbol set an ID which should be unique to your map. If you will only have one map on the GPS, you can just use the ones given here. If not, you should change these for different maps – I have not presently got details about which values are allowed to use. Each time you run ocad2img a config-file will be saved including the time and date. Reload this to rerun the conversion and change some details.

For our example case with maps called example.ocd and symbols/colors saved in example_ocd7.ocd, you can just click “Continue” to continue the conversion process. You will then get up an overview of all symbols used in your OCAD map. The first column is the OCAD symbol number, the second column is what kind of symbol this is, and the third column is a description of the symbol. The fourth column is an icon showing how this symbol will be represented in your Garmin map. 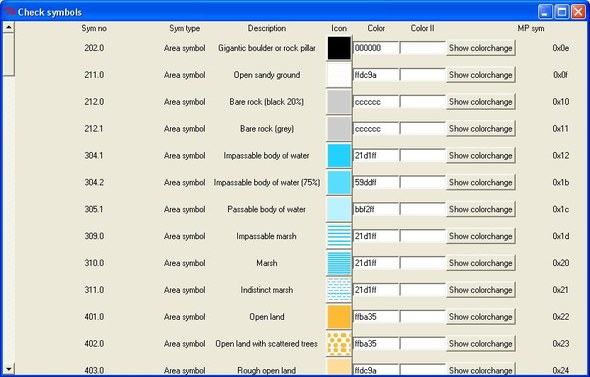 If you click the icon, you may change the representation of this OCAD map symbol in the Garmin map. E.g. by clicking one of the line symbols, you get up the following dialog: Here you can choose a new representation. The symbols which you can change to are read from the file symbols.txt. If you want to use ocad2img a lot, you will surely want to make your own symbols.txt file.

When you have finished changing all the symbols you want, click “Start conversion” at the bottom of the page to start the conversion process. For my example map, this results in several files being generated – the important ones being 17360060.img and 10378.TYP. The first of these is the Garmin map file, the second is the TYP-file of the Garmin map describing the custom symbols used in the map. If you would upload only the first of these files to your GPS, you would not get any custom symbols in your map, and your map would not look nice at all.

Step 3: Transfer to your GPS

The last step is to transfer your new Garmin map – including TYP-file – to your GPS. I will list two ways of transferring to your GPS here:

Thanks to Gjensidigestiftelsen and the Norwegian Orienteering Federation who supported this work. Thanks also to Richard Hensby for many discussions and tips regarding the conversion of OCAD maps to Garmin IMG maps. And thanks to the developers of ocad2mp – without which this would had not been possible.

In the future, Varegg will probably use the new custom raster map features on the Oregon GPS (to be described in the next article in this series) instead of IMG-maps / vector maps, as the procedure is much simpler for raster maps – and also the maps on the GPS will look exactly like the orienteering map you have in your hand. Still, the procedure described above will come in useful in some cases. Jan Kocbach is the founder of WorldofO.com - taking care of everything from site development to writing articles, photography and analysis.
@jankoc
Previous Maps from 25-manna
Next Maps from Gueorgiou & Team USA training camp