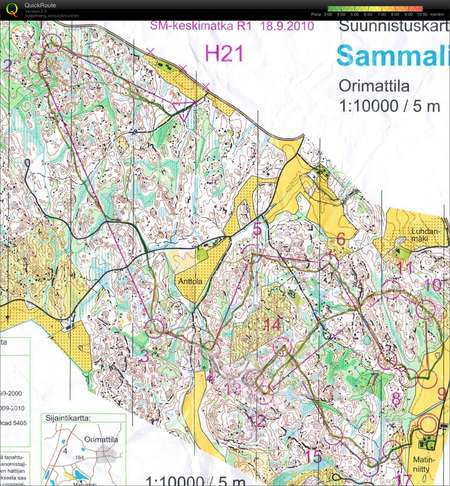 Thierry Gueorgiou gives two alternatives when interviewed about the course of the year 2010. The first is a race in Finland this September – the tricky Finnish short distance championships in Orimattila. – That was a real hit! I was already in trouble after just 300 meters, Gueorgiou comments. The second one was barely 300 meters long – and thus meant less trouble for the “King of Middle distance”.

When asked about what defines a good course for him, Gueorgiou focuses on technical challenges. – In general, a good course, for me, is a course where I realize that I need to develop my technique, and get even more passionate for this sport.

Read on to see the personal picks of Gueorgiou, and to read the complete interview. 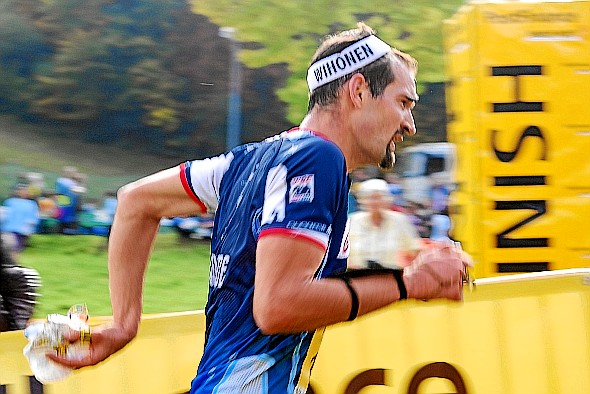 Thanks a lot to Thierry Gueorgiou who took the time to give long answers to the questions for “The Course of the Year 2010″ – and send over several maps and pictures.

Q: What was the best course you run in 2010 – and why?
Finnish middle distance championship in Orimattila, last September. That was a real hit! I was already in trouble after just 300 meters. I was always under a great pressure during the race to make a clear picture of the whole leg (lot of micro-routes). [See the map here (routegadget) and winner Kim Fagerudd’s route here – in miniature at the top of this page. This course has already been suggested for the course of the year previously].

I also enjoyed much Jukola this year (map). It is just amazing to realize that it is possible to gather about 11.000 orienteers and still offer real orienteering from start to finish. 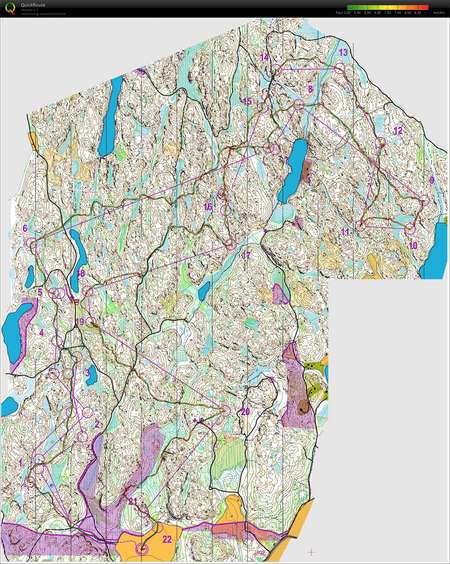 But, maybe, the greatest course of this year was a quite remote one, held in famous Peguerinos rocky terrain (Madrid). That was during Easter Monday, with Amelie Chataing and Philippe Adamski. We organized two competitions where there were chocolate eggs at control places in tricky terrain with “home-made map” (on Iphone, as we had no printer)…

[The article continues below the maps and pictures] 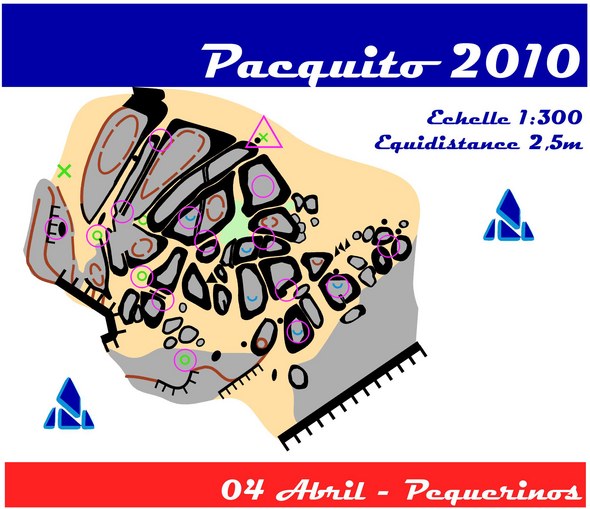 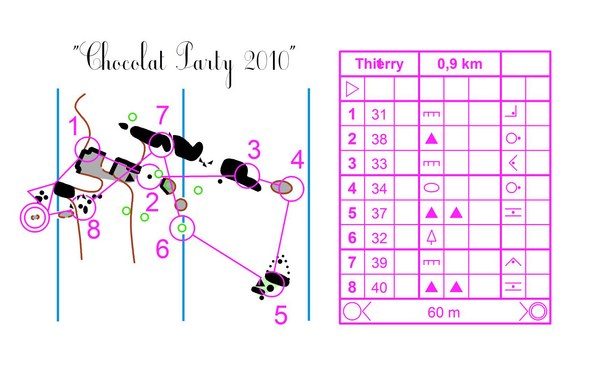 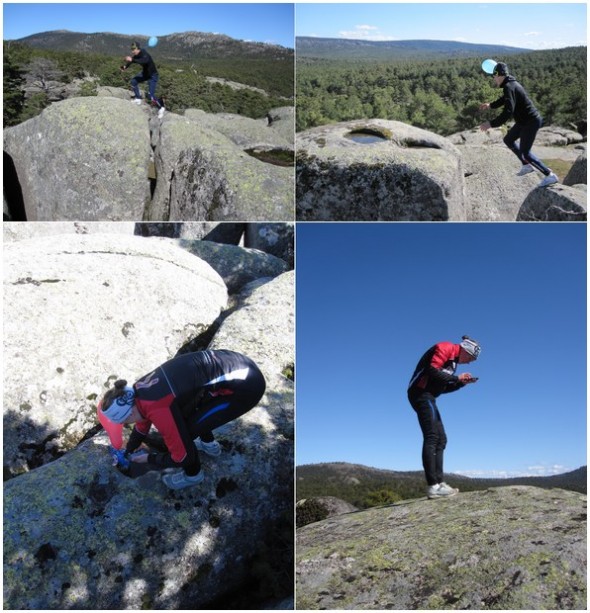 Q: What is the worst course you run in 2010?
Well, it is not so easy to pick one, because it is always hard to be unbiased as your performance has an influence on your judgment. But I would say that almost all the middle distances (or mixed middle like in NORT) of the World Cup season (including WOC) were quite frustrating. But if we look at it, the real problem wasn’t especially the course itself, but more the choice of the terrain (which is, for me, part of the course setting. The course setter should still have the power to say, despite other constraints: “sorry, this terrain isn’t made for international competitions”). I am still amazed that the WOC-organizers had to arrange fake forbidden areas to create route-choices…

Q: What is the best course you have run ever – if you must pick one from the top of your head?
Hopefully, I have been running many good ones. But, maybe, the one I remember most, is Finnish Long distance Champs 2003, in Juuka – pure Finnish forest, with real orienteering from A to Z (I have been running max. 500 meters of the 14.400 km on a track – see map with route and map without route). That’s the only map (along with NOM 84 – Aursfjord-Hamnvag in North Norway – map here) which hangs on my wall at my home.

[Read on below the map samples] 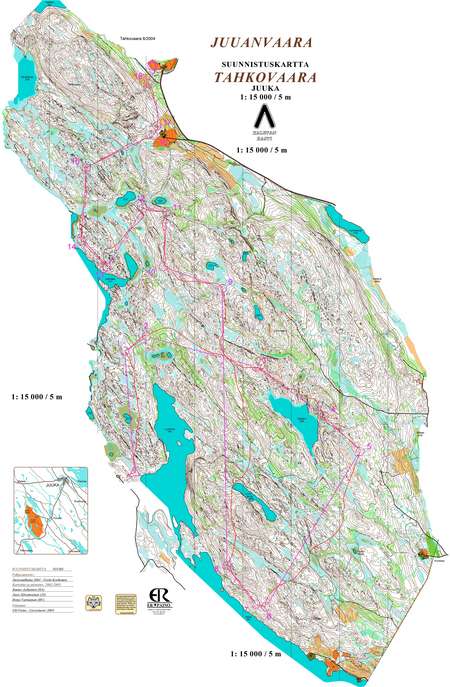 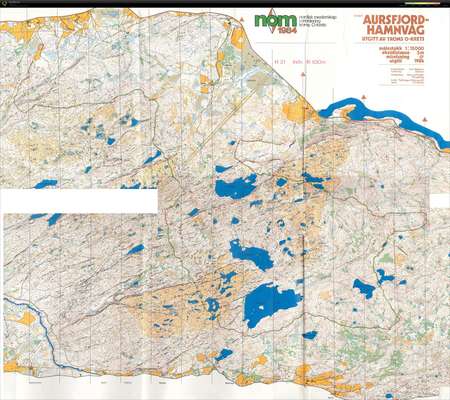 Q: Are the courses generally getting better, worse or staying on a level?
This is again hard to say, because of the “bitter old man” syndrome. But I can’t see how the arena concept used over the last years has been improving the course setting in general. It is often that starting from the arena or having spectator controls means not having the possibility to use all the good areas of the terrain or create longer legs.

But in the World Championships this year, it was funny to realize that people where seated in front of the giant screen, without looking at the runner passing just some meters from them. Hopefully in the future, the cameras in the forest will offer the same quality of the show without destroying the courses.

Q: What are the most important ingredients in a course in order for it to be a good course – in your opinion?
First I think it is about getting the best from the terrain (I still can’t figure out if it is better to have a good setting on a poor terrain or to have a bad course on a great terrain…). And then it comes to variety and fairness (especially in a relay). But in general, a good course, for me, is a course where I realize that I need to develop my technique, and get even more passionate for this sport.

Q: What are your goals for next year – and how do you change your training and focus in order to reach your goals in 2011?
My main goal in 2011 will be, of course, to win our next Easter Monday competition… and I will prepare for this as never before!

Jan Kocbach is the founder of WorldofO.com - taking care of everything from site development to writing articles, photography and analysis.
@jankoc
Previous Tiltnes chooses an ultralong distance race
Next Temptation Island