Jukola 2011 – Decisive moments from the GPS

Thierry Gueorgiou won the first duel for Kalevan Rasti at the long night of Jukola against Anders Nordberg, but Olav Lundanes won the second and more important duel for Halden against Fabian Hertner and Kalevan Rasti.

Olav Lundanes put up an impressive show on the last leg – running faster and more securely than Hertner. In the end Hertner was caught by the group behind after several smaller and bigger mistakes, and Olav Lundanes could cruise alone to victory more than 4 minutes ahead of number two.

Note! This report is based on GPS-data from the TV broadcast only! Full GPS-data will be released during Sunday.

There were some mistakes by both Kalevan Rasti and Halden, but they were not decisive as both Halden and Kalevan Rasti were close to the lead. 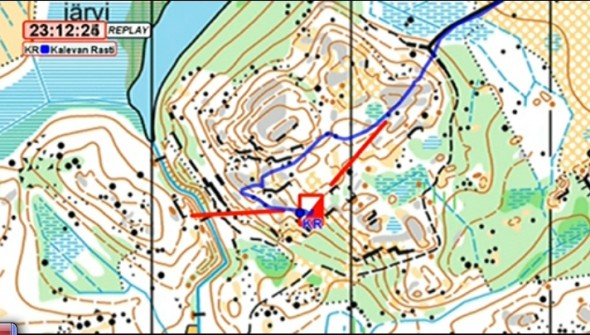 Halden early got a lead over Kalevan Rasti – but then does a mistake. Kalevan Rasti follows up with a big mistake – and is suddenly more than 4 minutes behind at the changeover. 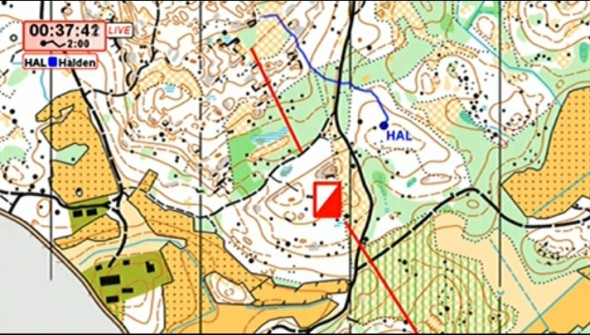 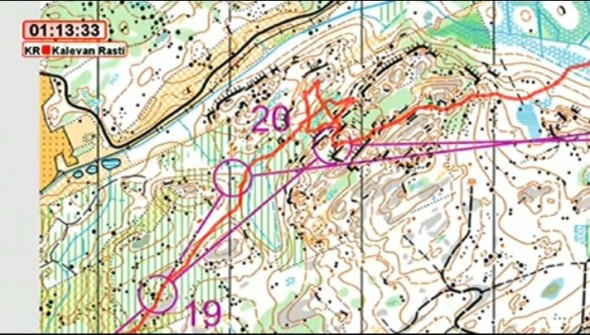 Ready for the Thierry Gueorgiou show. Going out 4 minutes behind – slowly picking up team after team – and in the end a lead of nearly a minute!

Starting 4 minutes behind, Gueorgiou was on the hunt for the leading group.

– The main problem I had was that I did not know if it was the leading group I caught up when I caught up with runners. Each time I caught somebody, I asked the people if this was the lead group or not. They usually did not even answer, so I kept running fast.

After passing runner after runner, Gueorgiou finally arrived at the front of the field.

– Then I saw my good friend Anders (Nordberg), so I knew that I was close to the leading group. I run for a while with him, and then I had a different forking, and kept going strong and got a gap. I made a small mistake at the very last control, but it was no problem.

Gueorgiou had mixed feelings about running the third leg in this years Jukola relay.

– I think it was Antti’s idea. I am training a lot in winter time at night, so I know I am strong there. As I was running the 3rd leg here,  I was this year also training on running fast at night. Lately I run every night, so I think I was well prepared.

Anders Nordberg on the other hand was very impressed with Gueorgiou’s race.

– I did two-three quite big mistakes. I probably lost 2-3 minutes in all on them. It was an OK race, but Thierry ran very fast. The mistakes were mostly the last 50 meters  into the control. 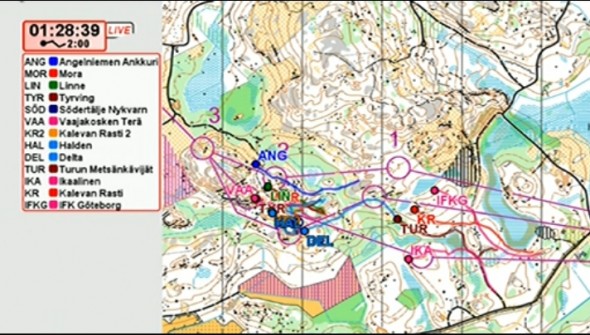 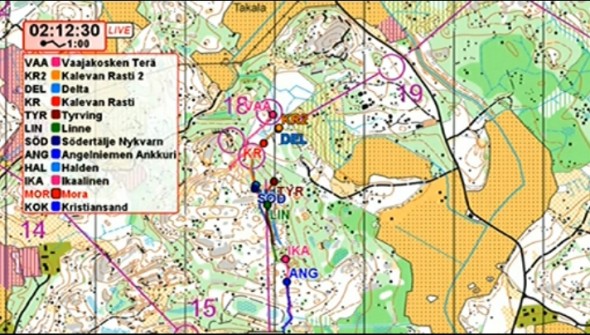 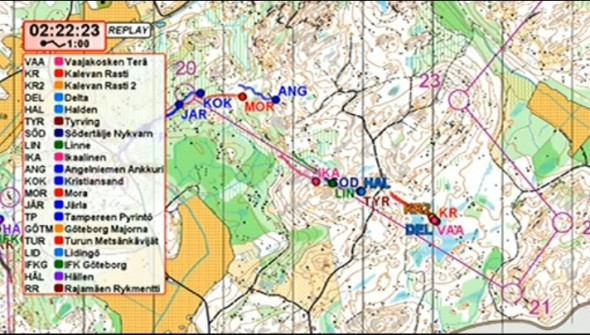 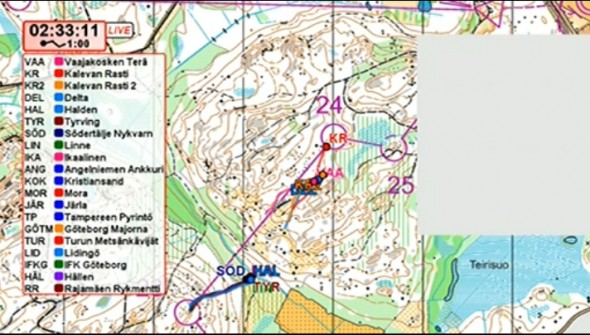 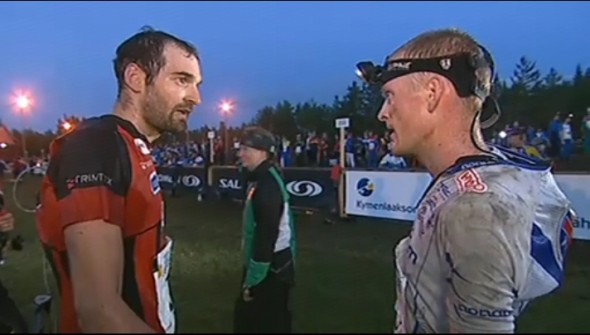 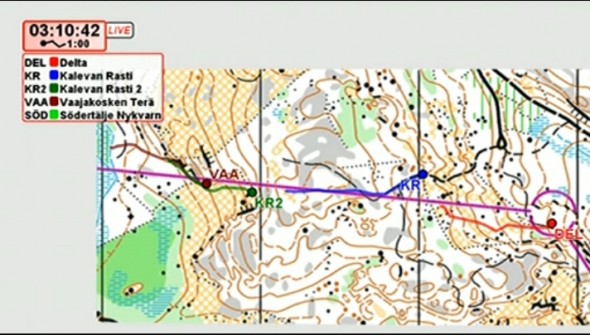 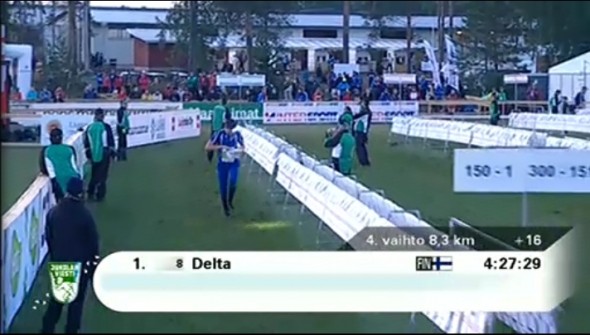 Whereas the 4th leg was a Sild show – the 5th was a Haldin show. Although Kiril Nikolov (Kalevan Rasti) came first back from the leg, Haldin (Halden) was 1:30 faster and came back only 36 seconds behind Kalevan Rasti in 4th spot – thus setting the scene for Emil Wingstedt on the 6th leg. 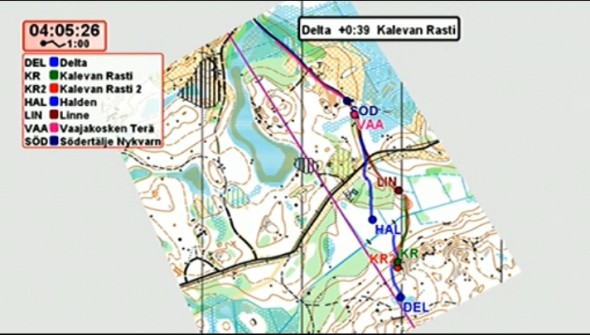 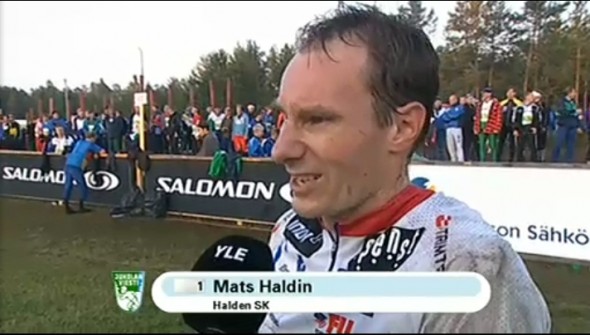 The 6th leg was were Halden wanted to get that small gap for Olav Lundanes for him to get his back free from Fabian Hertner (Kalevan Rasti).

Emil Wingstedt waited patiently behind Adamski, and took him in the end of the relay.

– Philippe went so fast and was offensive, so it was difficult to get ahead in this type of terrain withouthim doing a mistake. Therefore I just waited, and attacked when I got the opportunity.

– I waited all the race. We had the same forking except for one place, and there I had longer forking. Then I saw that Philippe went a little bit off the ideal line in one place, and I used the opportunity. 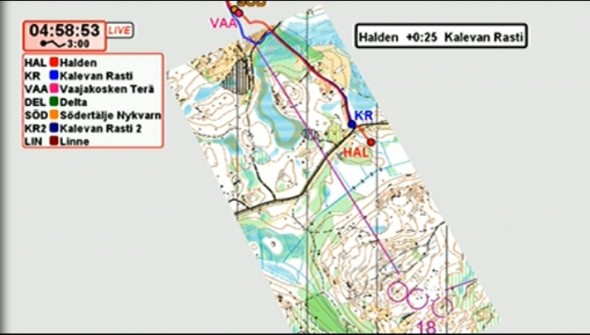 At the start of the leg it looked like it might get exciting with only a 44 second lead for Lundanes. But the spectators soon saw that this was Lundanes’ day. Lundanes slowly crept away from Fabian Hertner (Kalevan Rasti). Lundanes doing no mistakes – Hertner doing small mistakes all the way.

Lundanes was quite confident that it all went the Halden way.

– You never now if you are first with long legs and forking. But I thought I had run a very good race, so I expected that I was first when I saw nobody out there.

Hertner on the other hand was caught by the followers after a rather big mistake at the 22nd control. In the end he managed to compose himself, and took the second spot for Kalevan Rasti. 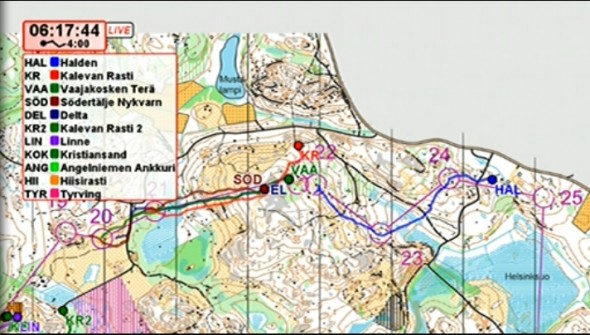 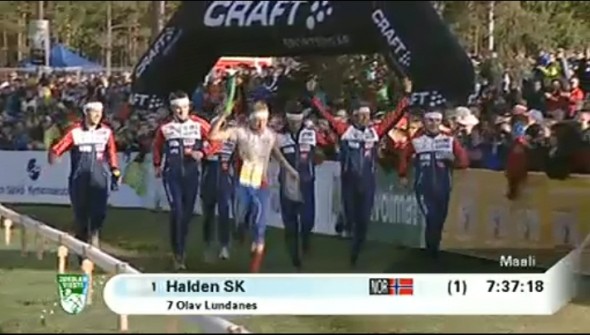 You may replay all of the excitement in the LiveBlog:

Jan Kocbach is the founder of WorldofO.com - taking care of everything from site development to writing articles, photography and analysis.
@jankoc
Previous Venla 2011 – Decisive GPS-tracking moments
Next Jukola 2011 Forking Error!