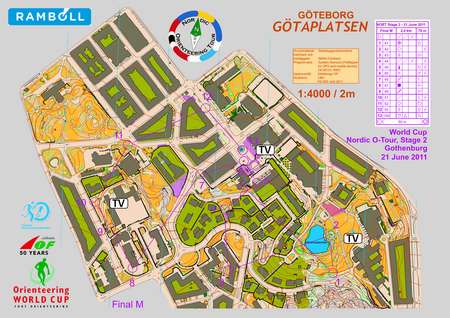 Jerker Lysell and Galina Vinogradova both took their first World Cup victories in the KnockOut sprint which was the second stage of the Nordic Orienteering Tour in Göteborg, Sweden today.

Comment by winner Lysell: – In the quarterfinal and in the semifinal I hardly looked at the map. But in the final it felt like I wanted to show a bit more.

Maps and GPS-tracking from the semifinals and finals:

Update June 21st, 23:55 CET:
Still no overall NORT results after two stages – kind of kills the NORT concept. Studying the results briefly also indicates that Olav Lundanes – a runner who was far behind in the final in stage 1 and nearly last in the quarterfinals in stage 2 – is around number four five in the overall NORT after two good qualification races. I’m not sure the average viewer would understand why Lundanes is in the top after that performance… Good for Lundanes – not too good for NORT.

Update June 22nd, 00:05 CET:
NORT Overall results after two stages up. 4 x Switzerland in the top among the men Finland-Denmark-Sweden among the women: