– This was easier than all the maps we have trained on during our preparations, one of the WOC participants said after visiting the model event for long distance today. Many of the competitors have already arrived in Savoie, France – and today it was time for the long distance model event.

The map had two distinctly different parts – just like the long distance qualification qualification will have according to WOC 2011 Bulletin 4 which was published yesterday:

The left part of the model map was no big suprise for the competitors – that is the “slow” part of the terrain. This part is part of the “Le Revard” map which most WOC-competitors have run on several times during their preparations. The right part of the model part – the steep, yellow part – is a different story. On the other hand, this is more traditional alpine orienteering which is not that tricky. 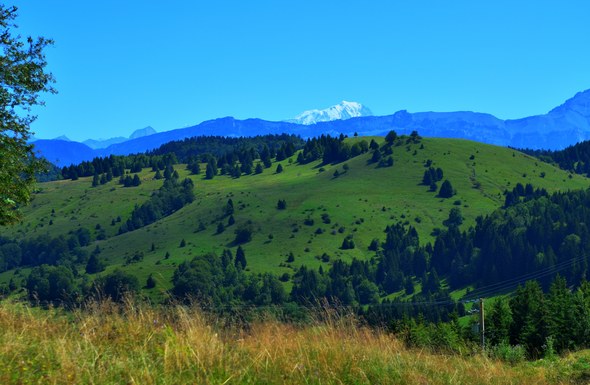 Picture: View towards Mont Blanc from the Model event long (close to control 231)

Based on the terrain description, the expected winning times (Note! The mens course is now 1 km longer in Bulletin 4 – increased from 8 to 9 km), the model map, and looking at Google Earth & the old Randonee map of the area (opened in 3DRerun with Google Earth) I would expect courses where more than half of the courses are in terrain with quite good runnability, partly steep open meadows. A smaller part will be in the tricky type of terrain which we have seen in most of the training maps – but it is probably this tricky part which will decide the race – especially in the transitions between easy and fast where you have to take the speed down – and the other way around where you have to be quick to take the speed up.

(See also pictures from the model event below the LiveBlog)

There will be a LiveBlog at World of O in cooperation with the WOC organizers for all races. As in 2010 and 2009 I am dependent on help from the o-community to keep the LiveBlog alive and moderate comments during the races as I’ll be in the forest taking photos. It looks like I will again be able to provide some WOC T-shirts or other effects to the ones helping in on moderating the LiveBlog – please contact me by e-mail jan@kocbach.net if you can contribute (I already have a few contributors, but it would still be good with more).

You find the LiveBlog either in the window below – or as a separate page here.

Jan Kocbach is the founder of WorldofO.com - taking care of everything from site development to writing articles, photography and analysis.
@jankoc
Previous WOC 2011 France: Early preview
Next WOC Middle Model: One day left