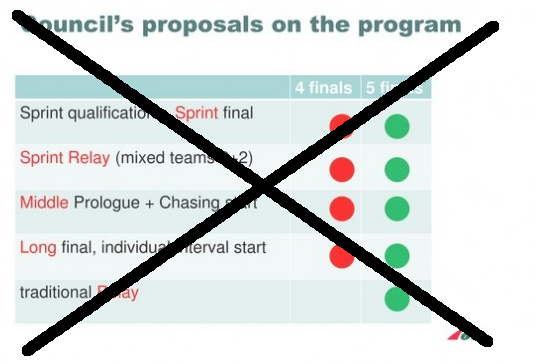 This is one step further than the message given on the IOF webpage on Friday from which it was not clear whether the WOC in the Future project would continue to explore further changes in today’s WOC program. In the Friday article it was stated that “at this point of time it is more important not to split the IOF family than to make the changes” and that this “is why we have decided to continue with the current programme” with regards to the upcoming General Assembly in Lausanne.

No further action from the IOF Council

In the joint meeting of the IOF Council and Commissions on Saturday, it was made clear that there will be no further action from the IOF Council related to the WOC in the Future project.

– The decision [to stop the project] was made not to bring conflict between federations. The federations must initiate something if they want change.

Three things in the IOF Council’s suggested program were focused on as problematic in the feedback from many of the federations: The removal of the individual start middle distance, the addition of the mixed relay and the new suggested qualification rules (especially for the long distance among the smaller nations).

You can see the response from the 19 federations in this PDF document – see also a summary of some of the nation’s responses in this World of O article (the federations which posted their response ahead of Friday).

Full win for the elite athletes 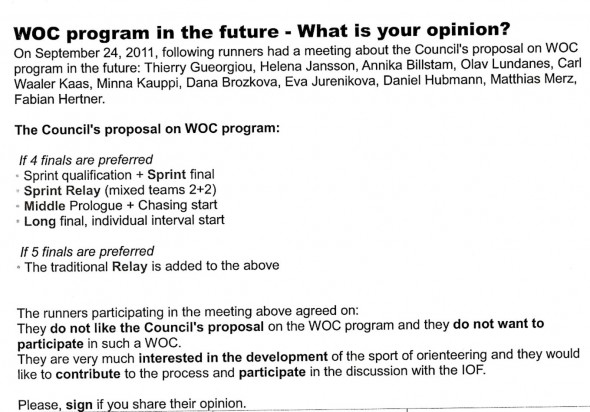 Eva Jurenikova – part of the Czech silver medal team from the relay at the World Championships in France last year – took the initiative to get the IOF to understand how the top runners feel about the suggested WOC program last autumn.

– The great majority of us runners are not happy with the proposal for the new WOC-program. This is why we decided to show our discontent and organized a petition during the World Cup weekend in Liberec, Jurenikova explained to World of O at that time.

Thus the IOF Council’s decision must be looked upon as a full win for the elite athletes – who have been working to forward their opinions to their respective federations.

No word on split WOC into sprint and forest WOC

When looking at the responses from the federations (PDF document), 12 of 19 federations wanted the IOF to evaluate the idea to split the WOC into a sprint WOC and a forest WOC to be organized in alternating year. This is quite a big number, considering that there was no mention of the split WOC alternative in the proposal the federations were asked to comment on. Of the 19 federations, 6 federations did not mention this (Belgium, Netherlands, South Africa, Ireland, France and Switzerland) while one nation was against the split WOC idea (Italy).

The IOF Council did not mention the split WOC alternative suggested by the NORD countries at all in their summary. It is an open question whether the NORD countries or any other federations want to pursue this idea further at the General Assembly in Lausanne in July this year. Any final decision for a modified WOC program does however not seem like a probable outcome for the General Assembly in Lausanne as the situation stands now – a request for a thorough  evaluation of the split WOC proposal might be a possible outcome though.

Jan Kocbach is the founder of WorldofO.com - taking care of everything from site development to writing articles, photography and analysis.
@jankoc
Previous WOC in the Future: What now?
Next IOF Data Standards project: Feedback welcome