Live from 12:00 CET! Who are the favourites to take the WOC Middle title in this year’s WOC in Switzerland? The technical terrain makes the race more open in the women’s class – and usually more suited for Thierry Gueorgiou in the men’s class. However, with Gueorgiou just back from injury, the men’s class might also be more open than usually.

This Jura terrain can be considered as a “light edition” of the terrain in France last year – the tricky parts being nearly up to the level from last year’s Savoie terrain although with somewhat better runnability, but with open, fast areas which should make speed adaptment very important.

Reigning champions are Thierry Gueorgiou and Helena Jansson. This year Gueorgiou has been injured since the EOC and is just back running again – whereas Helena Jansson is injured after an injury that worsened during the sprint and long distance, and will not run the middle distance.

With this terrain –  and Thierry Gueorgiou showing that he is back by winning his qualification heat – it is difficult to get around Thierry Gueorgiou as the big favourite. Gueorgiou has struggled with an injury which has set the French “King of Middle” on the sideline since the European Championships in the middle of May. Even with nearly no running for close to two months, Gueorgiou will be the biggest gold favourite. With (the small) uncertainty around the French technical mastermind, the fight for gold opens up. Olav Lundanes of Norway, reigning European Champion middle distance from Sweden, is probably the biggest runner up along with Swiss Baptiste Rollier who has prepared extremely well for this race, Swedish Peter Öberg who surprises year after year by coming from an outsider position and taking a medal, Valentin Novikov – the “EOC middle specialist” and Carl Waaler Kaas – the champion from Trondheim in 2010. But the list of potential gold medalists is even longer: Fabian Hertner, Tue Lassen, Francois Gonon, Marc Lauenstein, Oleksandr Kratov and several others have the potential to be up there on the WOC middle distance if they hit the jackpot.

Taking a look at Heat A, Thierry Gueorgiou and Olav Lundanes are the two runners standing out. Gueorgiou has a small edge on Lundanes, but small than it has used to be. Still this is a plus for Gueorgiou. The next showing potential in the same range as Gueorgiou and Lundanes is Majtaz Stanfel. However, Stanfel seems to be too unsteady to make a top result.

Looking further at Heat B, you can see that Kerschbaumer is outraced by Novikov in quite large parts of the race – but Kerschbaumer had a much cleaner race. Also, Bergman and Lauenstein are better than Kerschbaumer  in parts of the course – but with quite big mistakes and unsteady running.  Still these three should all be counted among the outsiders.

The last heat was won by Cal Waaler Kaas – who’s performance index is not exceptionally high compared to the others in top of the heat. Rather Kaas has had a steady race. Several other runners have a similar race characteristics – Hertner, Bertuks, Öberg and Ikonen. Francois Gonon is the only one running parts of the course significantly better, but on the other hand Gonon was very unstable in this competition. Note that Baptiste Rollier was clearly below most of these – that might however have been due to slower running pace to save strength for the final.

In the women’s class, this is probably where Simone Niggli is the least favourite – but after 5 World Cup victories of 5 possible this season she is still the gold favourite. The second big favourite is Minna Kauppi of Finland – showing very impressive running on parts of the Swiss and Finnish WOC tests middle distance. The third big favourite is Tatiana Riabkina – who has performed very well in the qualification races. In addition, Swedish junior Tove Alexandersson must be counted among the outsider. As Alexandersson showed at JWOC in Slovakia last week, she can either win a clear victory with a perfect race – or miss the finals. In the qualification she managed to win her heat – thus she is obviously comfortable with this terrain type.

Ida Bobach from Denmark – last year’s silver medalist is also one who can take it home. Also count in the other Swiss women. The middle distance would have been the best opportunity for gold for Swedish Helena Jansson, but due to injury she is not on start.

Again we take a look at the performance index.

In addition to Tatiana Riabkina – who also has an unsteady race – Mari Fasting and Judith Wyder show good potential in Heat A. Note however how all runners have done significant mistakes. 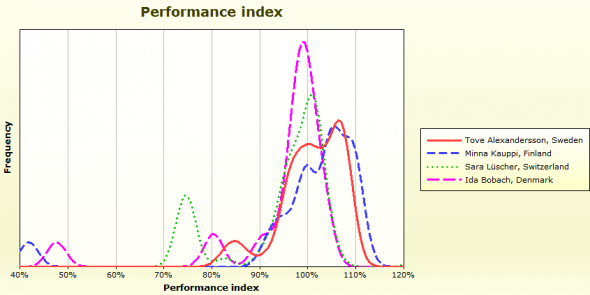 In Heat B, Tove Alexandersson and Minna Kauppi have similar characteristics – Minna Kauppi being slightly better except for her one big mistake. Ida Bobach on the other hand has slower speed – but has probably not given it all in the qualification.

Simone Niggli’s performance index does not look as impressive as it usually does. There seems to be mistakes, and also it is not as far too the right compared to the opponents as it usually is. Also look out for Annika Billstam who has a very good race in big parts of the course.

The final terrain is in parts similar to the qualification terrain, but in addition offers meadows which are very fast runnable. Overall the running speed is significantly higher than in the qualification – although there are parts where the running is slow here also. Technically the terrain is expected to be very challenging in parts – but also easier in parts making it necessary to push up the speed. 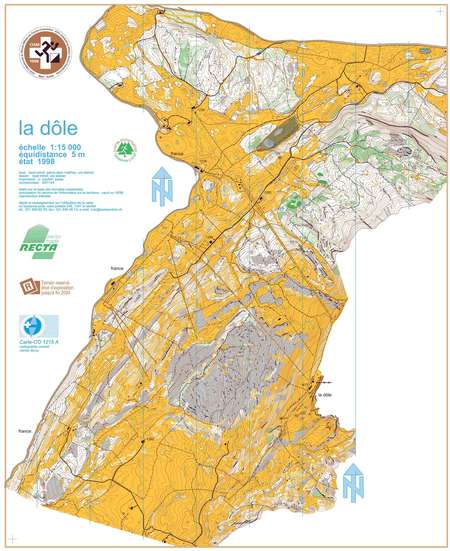