Simone Niggli had an incredible start of her race – winning the 6 first legs and building up a one minute lead to Annika Billstam. Minna Kauppi on the other hand had a bad start of the race – loosing nearly two minutes to Niggli.

Below a short analysis of the women’s WOC Long distance final 2012 is given based on GPS autOanalysis and split times. There was unfortunately not enough time to make the analysis as complete as for the men, but please add a comment below if you spot important points that are missing in this analysis.

Niggli starts with an incredible speed – being in the speed with 24 seconds already on control 1 (with Kauppi on seconds spot). Most of this is taken already on the way to the start control. This is a woman who really wanted revenge after the middle distance!

On the long leg to 6 Niggli’s running speed is higher, but Kauppi is faster up the hill in the middle of the leg. Also, Niggli looses the concentration the last bit into number 6 – being inaccurate with direction and missing the control some 15-20 seconds – and thus Niggli is only 12 seconds faster on the leg although her speed is significantly higher.

A bigger mistake for Niggli to control 8 – and again wrong direction – this time wrong direction out of the control. About a minute lost for Niggli, and now Kauppi is only 40 seconds down on Niggli. Billstam is even past Niggli – in the lead with 5 seconds. This is, however, the only time anyone else than Niggli is in the lead.

To control 9 Niggli is angry and set up another of her super-performances: She wins the leg with 28 seconds. Kauppi in third is 29 seconds down. Niggli runs right while Kauppi takes left.

From control 9 to 12 is a phase in the race where Kauppi is faster than Niggli – but then Kauppi looses another 40 seconds on control 13 after running 45 degrees wrong direction out of control 13.

From control 13 and on, Kauppi continues to run with approximately the same speed as Niggli, but Kauppi does several small direction errors. Typically not checking the direction, and loosing some 5-10 seconds in different spots. No big mistakes, but too much in order to get closer and win the gold medal.

Comparing Niggli with Billstam – the start loooks similar as the Niggli/Kauppi case. Simone Niggli simply has an other gear compared to the others. Until control 7 there are only small time differences – Niggli gaining some time for every leg. At control 7 Niggli is 58 seconds ahead of Billstam.

With the 1 minute mistake at control 8 for Niggli, Billstam is briefly in the lead. But then Niggli’s fantastic 8th leg makes an end to that. For the remainder of the race until the spectator control, there are no big time losses for Billstam – Niggli is slowly pulling away. Then Billstam gets a 30 second mistake at control number 20 – and afterwards is significantly faster than Niggli for the rest of the small last loop.

The leg from 3-4 is a very interesting one in the women’s class. In the men’s class, the direct route was clearly the best route for a similar leg (with the 3rd control placed some 70 meters further south). In the women’s class the left around-route is the fastest – with Niggli and Billstam running the fastest times.

Note, however, that these are also the two who are fastest on this time of the race, and therefore it is difficult to make a complete conclusion. Riabkina – running direct – is only 5 seconds slower than Niggli. This indicates that actually the direct route is the fastest, just as for the men (as Niggli is running faster). 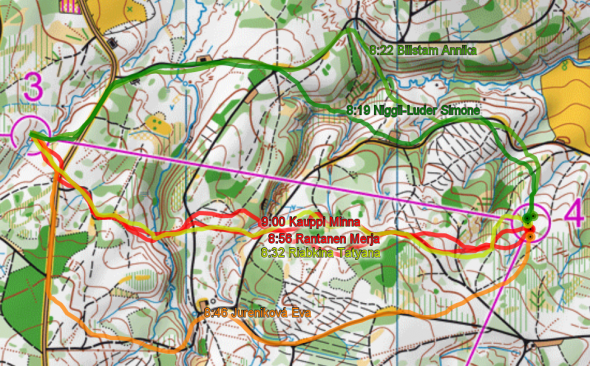 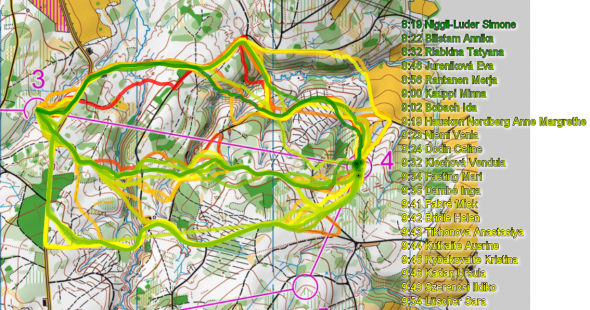 As for the similar leg for the men, the direct route is the fastest. Very interesting to see how many of the runners run far too long around on this leg. 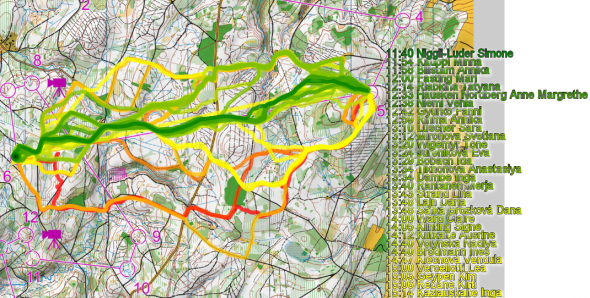 With Niggli running right and winning the leg with 28 seconds, it is tempting to assume that right is the best route choice. However, Niggli just runs at an incredible speed after her mistake. The second fastest time on this leg – run by Mari Fasting – is actually on a different route – the far left. There are also several others running Niggli’s route, loosing some seconds to Fasting. 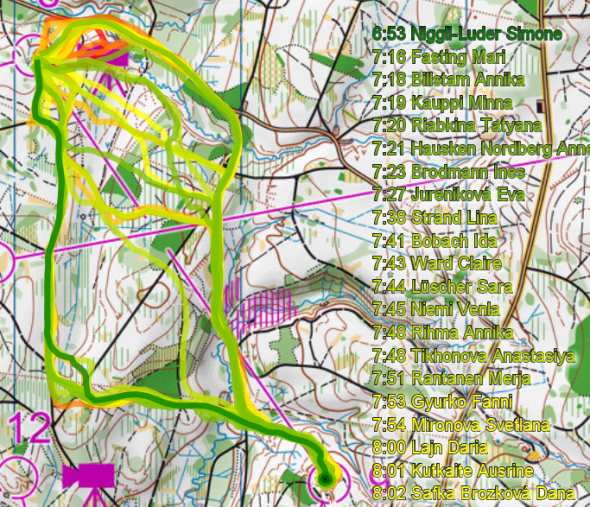 Jan Kocbach is the founder of WorldofO.com - taking care of everything from site development to writing articles, photography and analysis.
@jankoc
Previous WOC Long Men: The Analysis!
Next Preview: Who wins WOC Relay 2012?