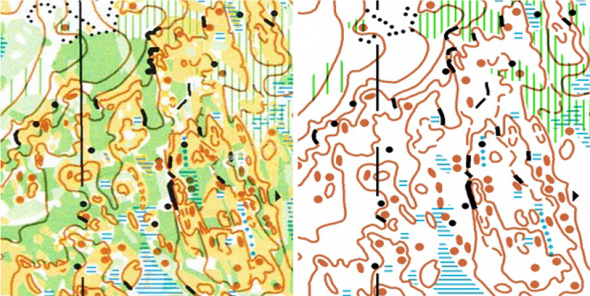 – A part of the map used at 25-manna this year is an example of a poor legible map. Unfortunately there are quite a few other examples out there, Tore Sandvik comments in this article. One of Sandvik’s main points is that although laser scanned base maps  is a revolution for accuracy – it makes it more difficult for mappers to draw good legible maps.

Sandvik is known as an engineer in cartography with a fine orienteering career: WOC gold in relay from Inverness in 1999, WOC silver in middle from Tampere in 2001 – and a lot of 10Mila victories with Halden. Sandvik has also a fair bit of experience as a mapper. The following article is based on several e-mails from Sandvik.

The illustration at the top of the page shows part of the 25manna map to the left, and the same part redrawn by Sandvik to the right.

– For fun, I redrew a part of the 25-manna map, Sandvik says about the map to the right. – I didn’t bother to draw the green and yellow though, as I decided to focus mainly on the brown in order to show a better legible map than the original by using the ISOM2000. Of course, this was just an highly experimental exercise and a bit unfair to the mapper.

The point Sandvik tries to make here is that the original map is not drawn according to ISOM2000 (the international standard for orienteering maps). The map is drawn using too small symbols and too small gaps between symbols. The minimum symbol and gap dimensions are given in the ISOM2000, and the ISOM2000 emphasizes the importance of legibility. Nevertheless, these rules seems to be difficult to follow for (some) mappers, according to Sandvik.

Laser base maps often results in excessive use of form lines, numerous and too small brown details

– Laser scanned base maps clearly is a revolution for accuracy and for simplifying surveying. Paradoxically tough, it tends to make it more difficult for mappers to draw good legible maps. Especially to draw a good legible contour image seems to be a big challenge for many mappers. Laser base maps often results in excessive use of form lines, numerous and too small brown details, Sandvik says.

– I guess mappers (and orienteers?) want details more than good legibility, quite the opposite of what the ISOM2000 says!

According to Sandvik, there seems to exist a commonly used OCAD symbol set in Sweden that is deviant from the ISOM2000 and even from the official Swedish ISOM2000 variant.

– This symbol set was apparently used on all the (ISOM) 2013 Swedish Championships maps, Sandvik comments.

– This symbol set includes some extra 70% – sized symbols for many point features. On the 25-manna map you can see those symbols as “mini” small knolls or “mini” elongated knolls.

– About generalization; I would like to call this the greatest artistic exercise of mapping, Sandvik says.

– It is not important how many details you can put on the map – it’s all about putting enough of the important details. A lesson to learn from generalization can be found here (in Norwegian).

Below Sandvik has collected some key points from ISOM2000 related to the issues discussed above.

What do YOU think?

What do you think about the issue brought up by Sandvik here? These discussions are coming up more and more often as the base map material gets improved. Sandvik discussed the Swedish practice in particular – but we saw similar issues with regards to the WOC maps in France in 2011 and with many other mapping projects. There seems to be a “fight” between the camp of mappers/orienteers who want as many details as possible on the map – and the “generalization camp”. The latter is fronted by the map committee of the IOF – which is also responsible for ISOM.

Sandik’s question to the readers is what we should do to get better legible maps in the future. Do we need a better control system? More detailed instructions and follow-up for mappers? Some kind of built-in ISOM-control in OCAD? And for Sweden specifically: A new OCAD symbol set that is in accordance with the ISOM2000?

Jan Kocbach is the founder of WorldofO.com - taking care of everything from site development to writing articles, photography and analysis.
@jankoc
Previous JEC Relay: Maps and Results
Next EYOC 2013: Maps and Results