Both Maja Alm and Tove Alexandersson did bad technical races taking wrong route choices and doing navigational errors – but they still managed to win medals due to their high running speed. Judith Wyder secured gold through a very stable race – at a bit lower speed.

The sprint in Venice was a mix of routechoice legs and navigationally technical legs. There were more mistakes being done among the women than among the men – in the women’s class one could afford doing quite big mistakes and still fighting for a top position. Only Judith Wyder’s race was close to perfect.

Below detailed splits tables and route choice options are included for each leg. For the legs of special interest (legs which were desicive with respect to route choices taken by the runners), the variant each runner took in included in the table below the map.

Judith Wyder does not have the highest speed in the field, but she runs a very stable race – taking the correct route choices all the way, and avoiding mistakes. This gives her a clear win and the gold medal in WOC sprint 2014.

Maja Alm does a really bad race. She starts losing time already in the park to the second control (4 seconds), then takes the wrong route to 3 losing her a few seconds more, does a big navigational mistake to 5 (17 seconds lost), takes the wrong route to 9 (12 seconds lost) and loses 5 seconds to 13 on navigational trouble. In the end she is only 15 seconds behind the gold medal with this race – incredible running speed!

Lena Eliasson also has higher speed than Wyder, but does several route choice errors, costing her the place on the podium. Volynska’s speed is a bit lower – but without the route choice errors she would also have been well within the medals.

An easy start to the first control. 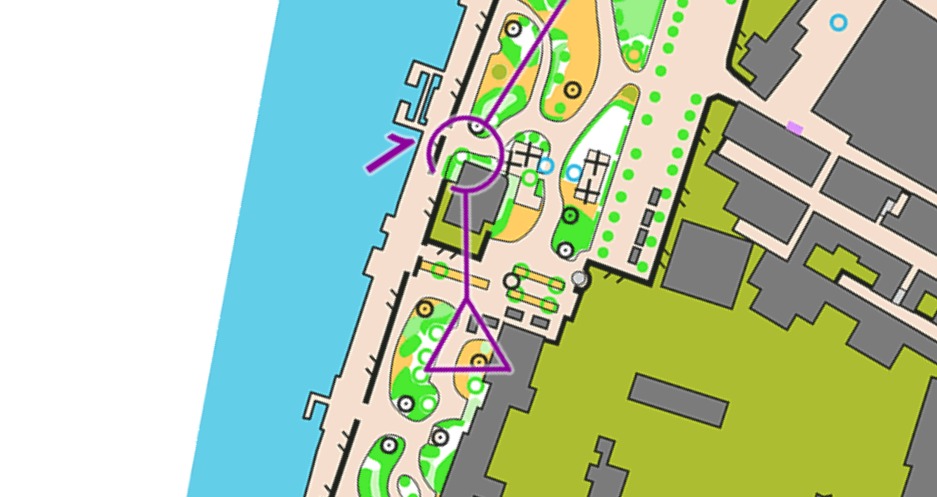 The second control is an easy control in the park without route choice options. Note how Maja Alm loses 4 seconds already to the second control – having only 30th best split time. No special routechoice challenges here. 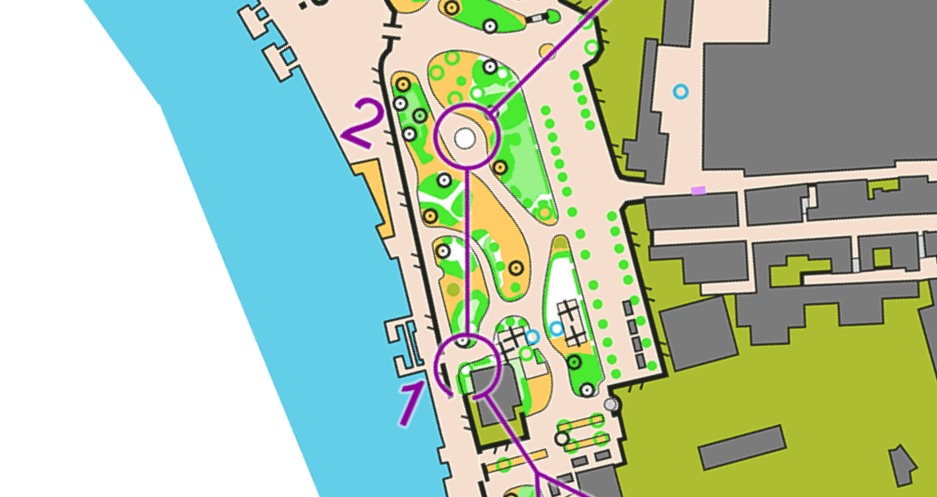 The leg to the third control is the first routechoice challenge. There are two choices – going left (B, 205 meter) or right (A, 209 meter). In addition quite a few do a mistake and run something like C (although not running all the way up the steps. It is unclear why they do this – from the map it looks very obvious that this is not an alternative.

Most of the fast runners on this leg run B – Alexandersson (losing 3 seconds to Wyder), Alm (losing 5 seconds) and Volynska (+6 s) run A. Klingenberg (losing 29 seconds) and Guizzardi (losing 32 seconds) run a C-variant.

Even if A is only a few meters longer than B, it looks like A is 3-5 seconds slower (as Alexandersson runs faster in this period of the race). This might be due to the fact that several run partly through the green instead of running all around the green part like the A route is drawn here. 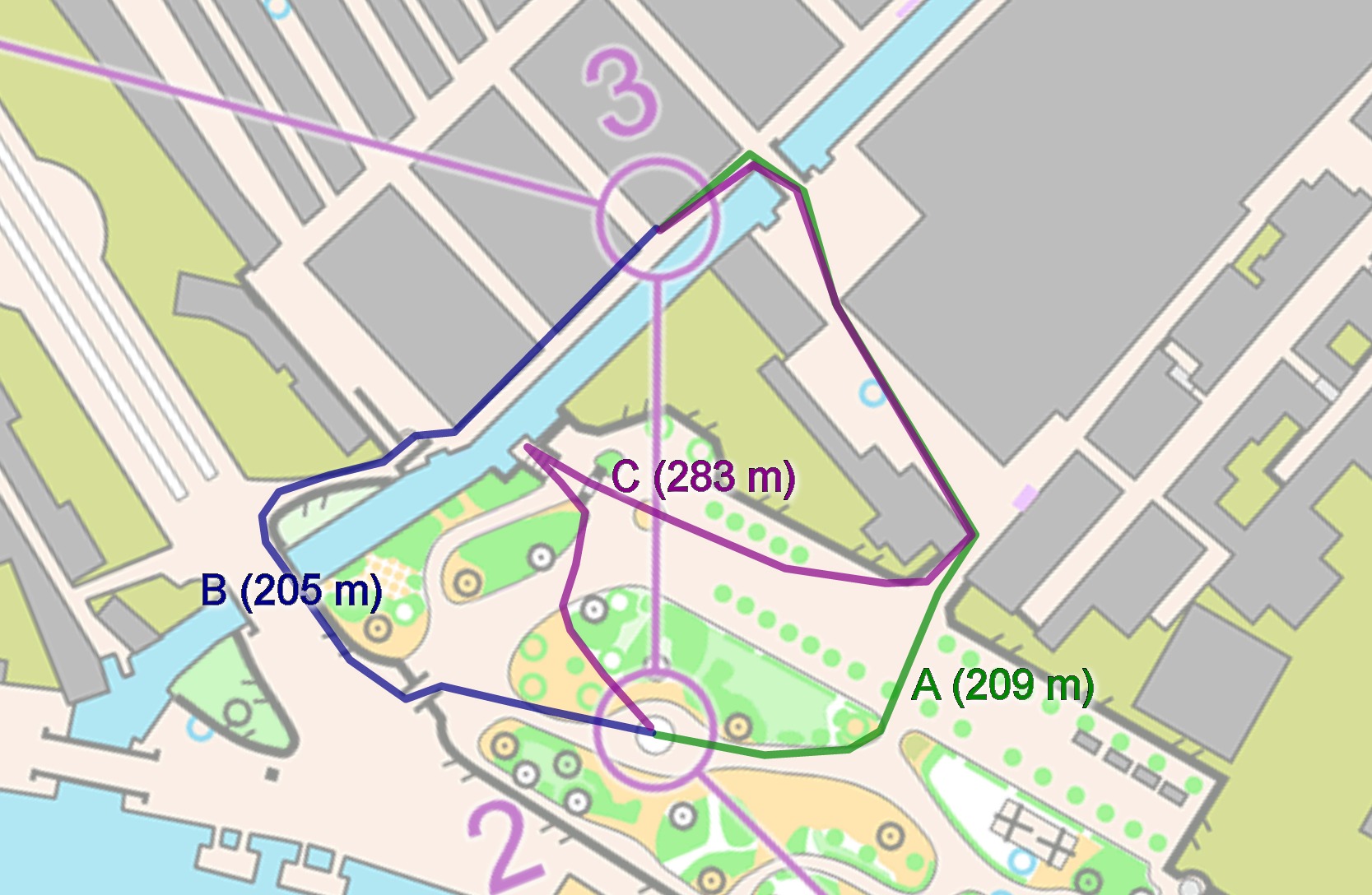 The leg to control 4 is a long one, but without very interesting route choice options. Few runners lose significant time. Lena Eliasson and Vinogradova use their running speed and have strong split times. 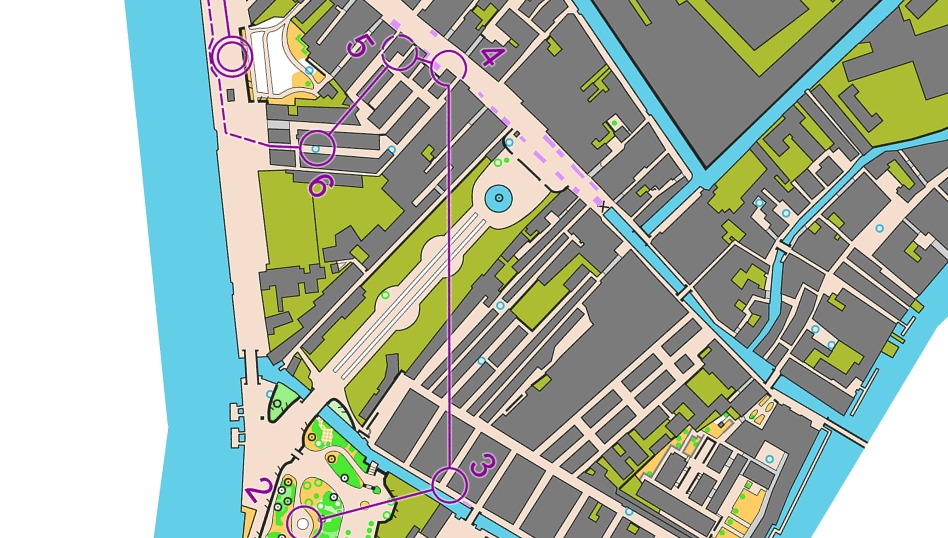 A short leg which proved very problematic for some of the women – 5-6 of the women running the rightmost route lose 15-40 seconds here, but good times are run on both variants. Probably it is difficult to see some of the small passages. Maja Alm loses 17 seconds here (she is only 13 seconds behind at the end of the race). Juli Gross loses 32 seconds. Even Wyder loses some time here – only 4 seconds, but she has the 24th best split time. One of her worst legs.

At this point in the race Alexandersson takes over the lead, Wyder being two seconds behind. Maja Alm is down in 18th place at +23 seconds after less than 4 minutes running. 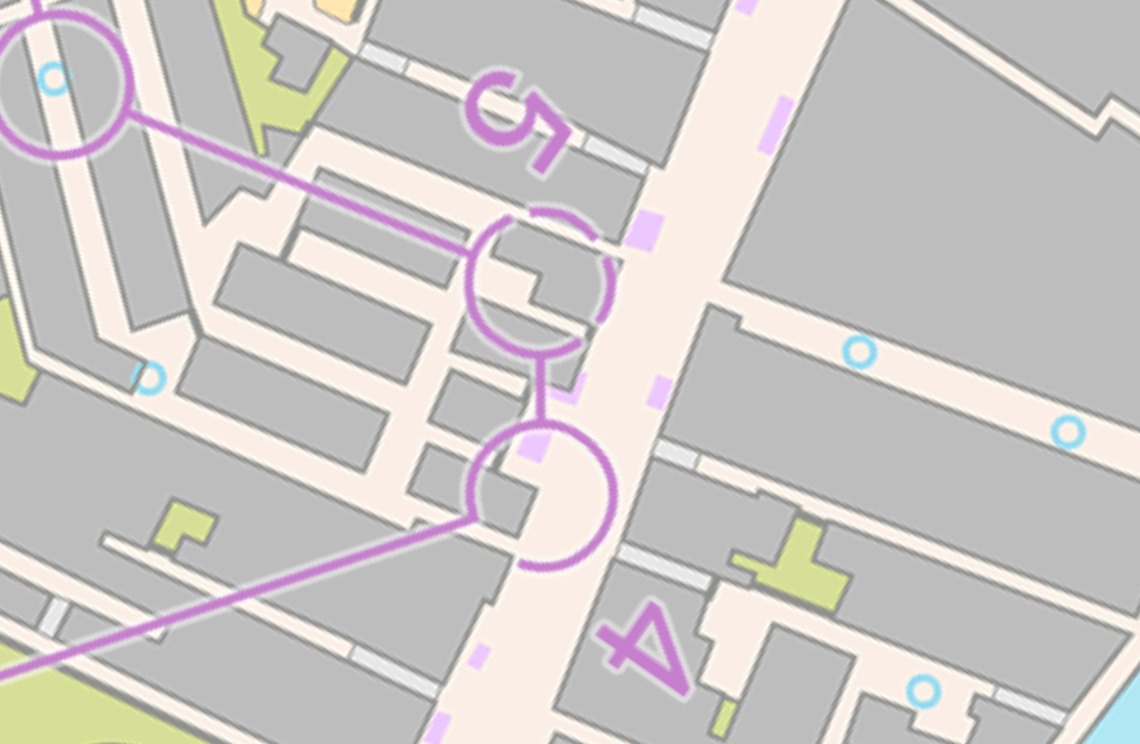 Short leg with some route choice options – not decisive though. 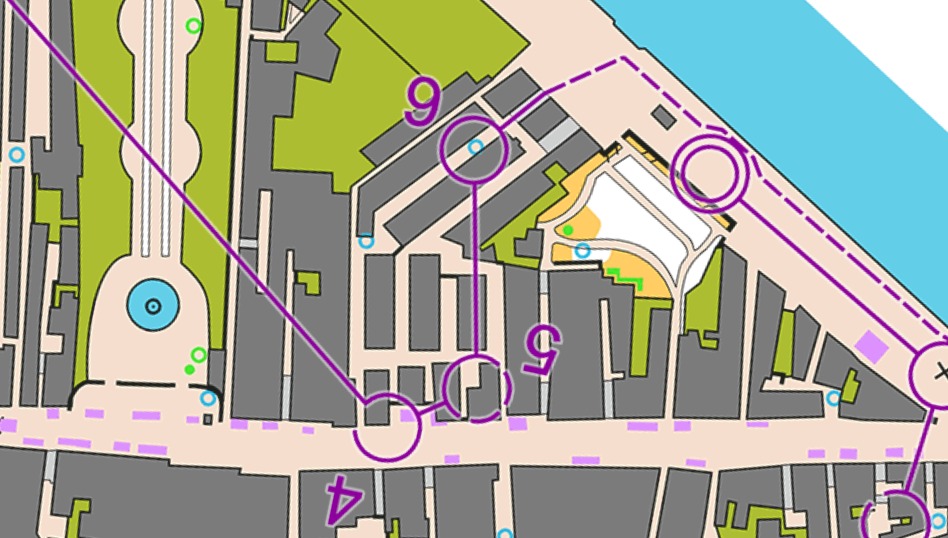 Note how Volynska loses 8 seconds to the spectator control – twice as much as she lost on the first 6 controls in total. 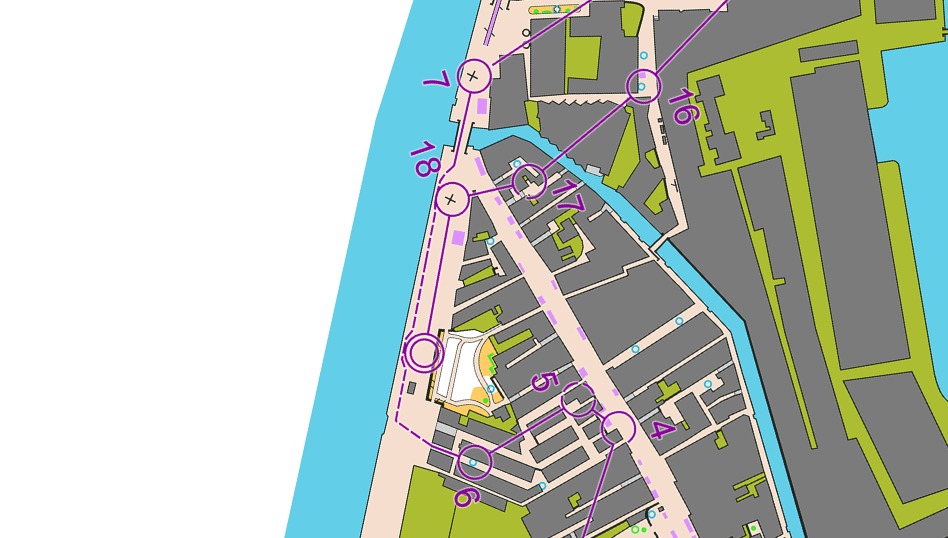 This is the leg were Kyburz lost a lot of time in the men’s class by taking a wrong route choice (going to the right). The women however mange this leg well. 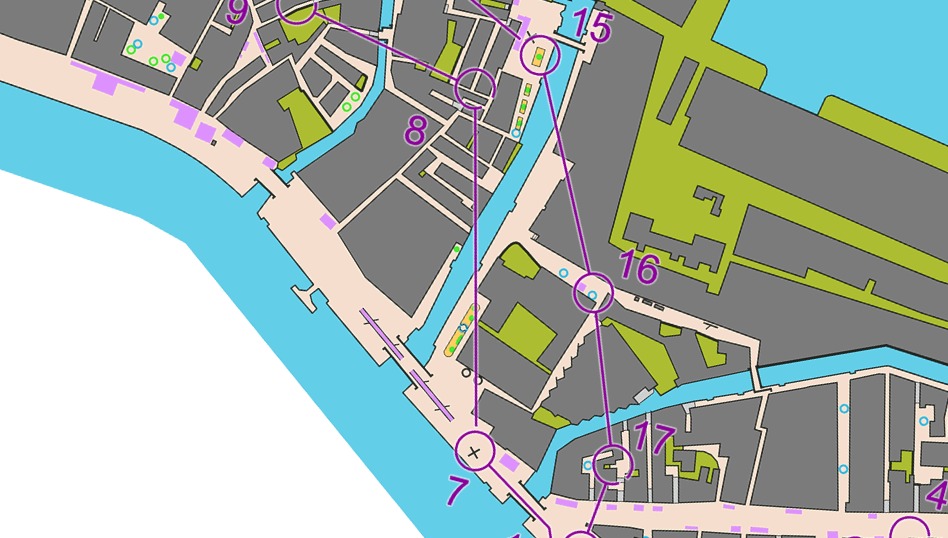 This is a route choice leg where it is quite obvious to see that B is significantly shorter than the two other options. Nearly all women run B, but not how Maja Alm runs C and loses another 12 seconds and Tove Alexandersson runs A and loses 17 seconds. Note also that Wyder loses another 4 seconds, but she takes the correct route.

At this point in the race Tove Alexandersson loses her lead to Lena Eliasson – Wyder is 2 seconds down. 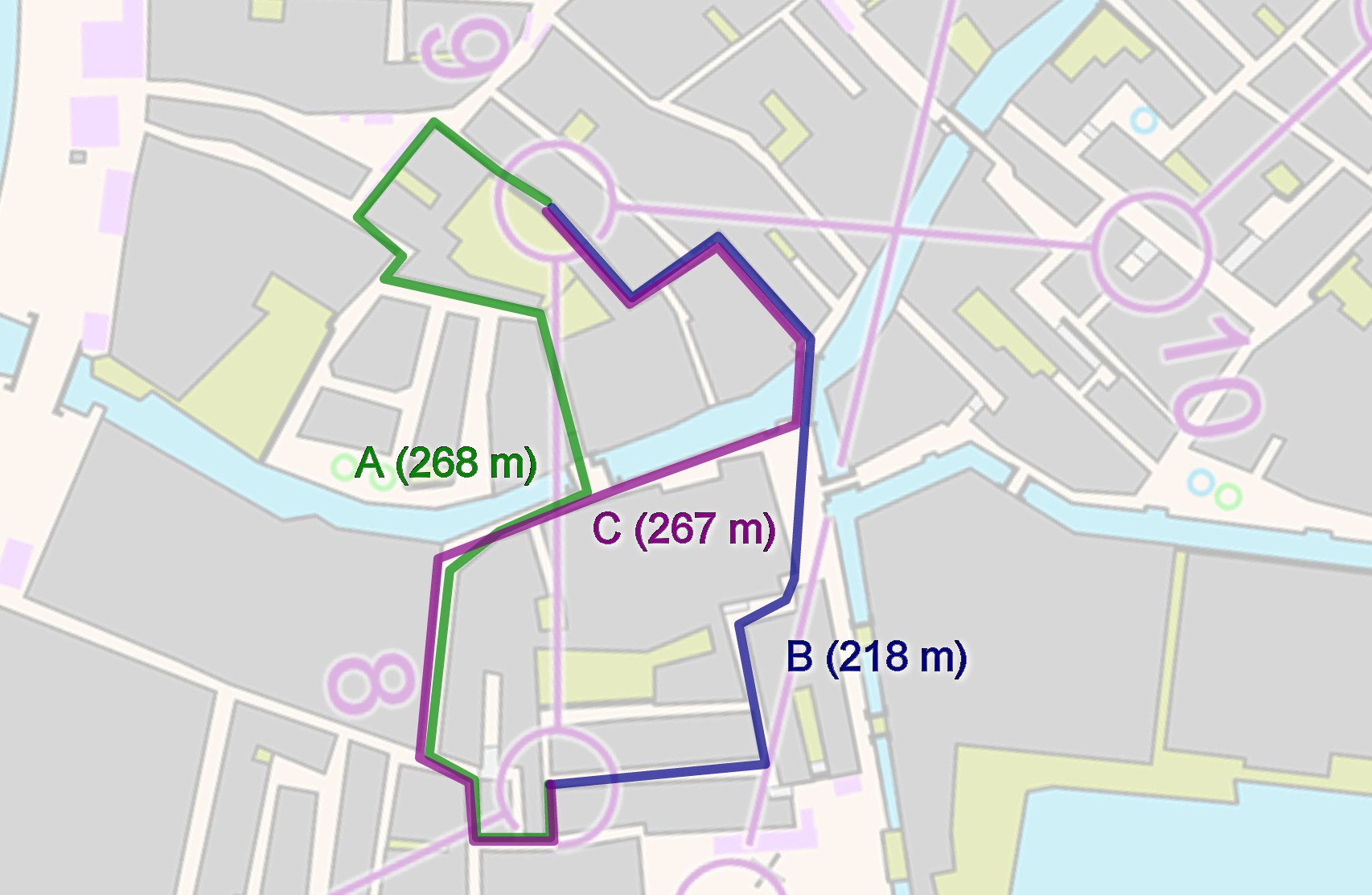 Another route choice leg where it is quite easy to see that A is shorter. Almost all top women see this, but note how Tove Alexandersson being in a bad period of her race takes the wrong choice and loses 10 seconds. We also see that Klingenberg loses 11 seconds on this variant. Volynska takes the correct choice, but probably has some navigational problems and Volynska loses 11 seconds even if she takes the correct route. 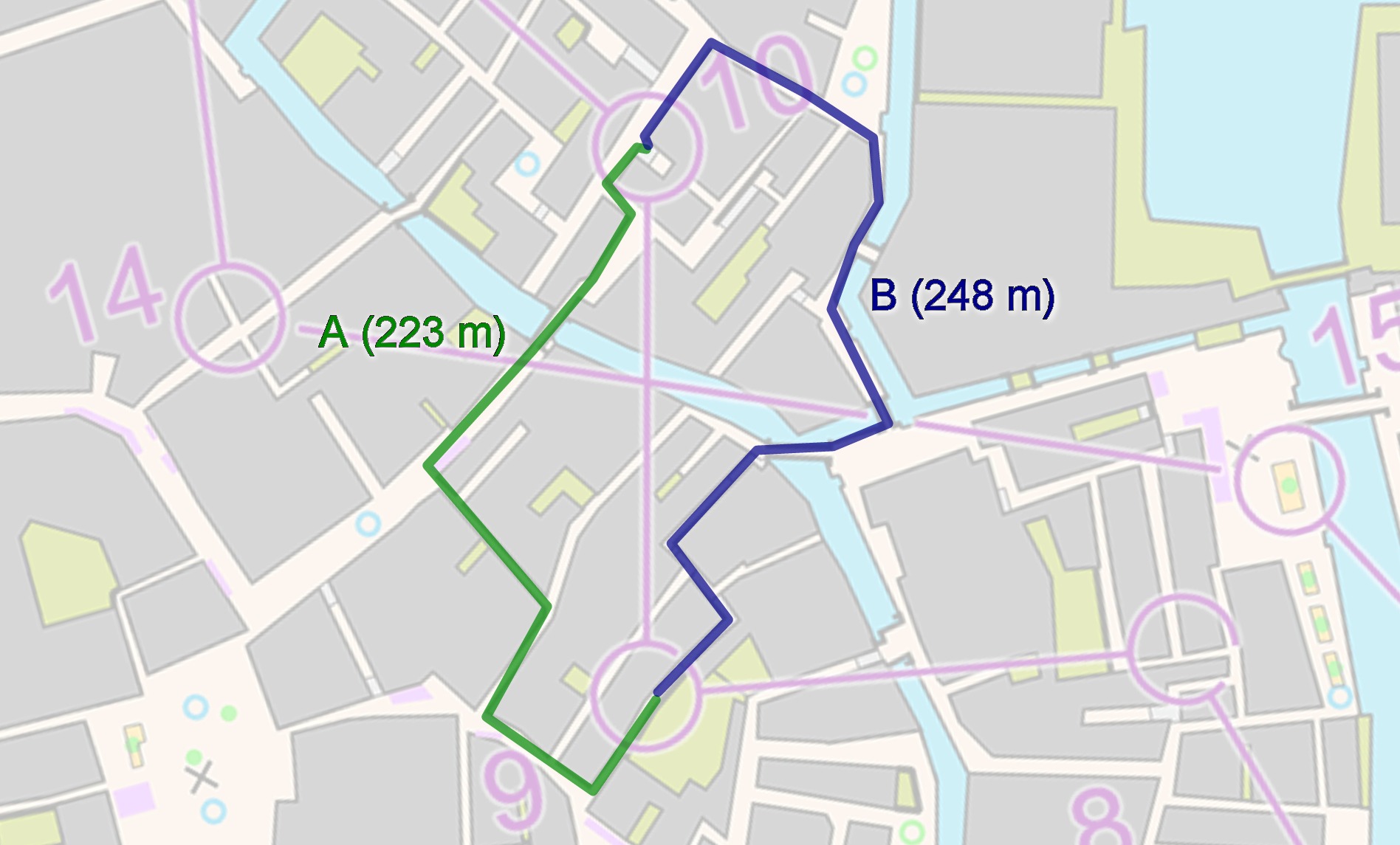 A short leg with two routes which are nearly equal in time/length. Tricky orienteering though, so this is a nice setup for leg 12. 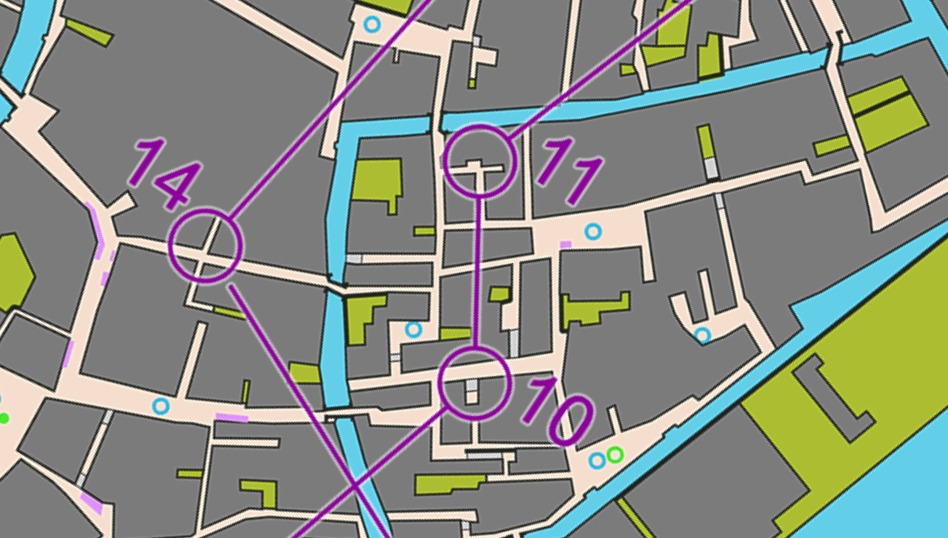 At this point in the race Wyder takes over the lead, 6 seconds ahead of Eliasson. Alm wins the leg and is getting closer – at this point in 4th place at +13. Tove Alexandersson is outside the medals in 5th place, 17 seconds behind. 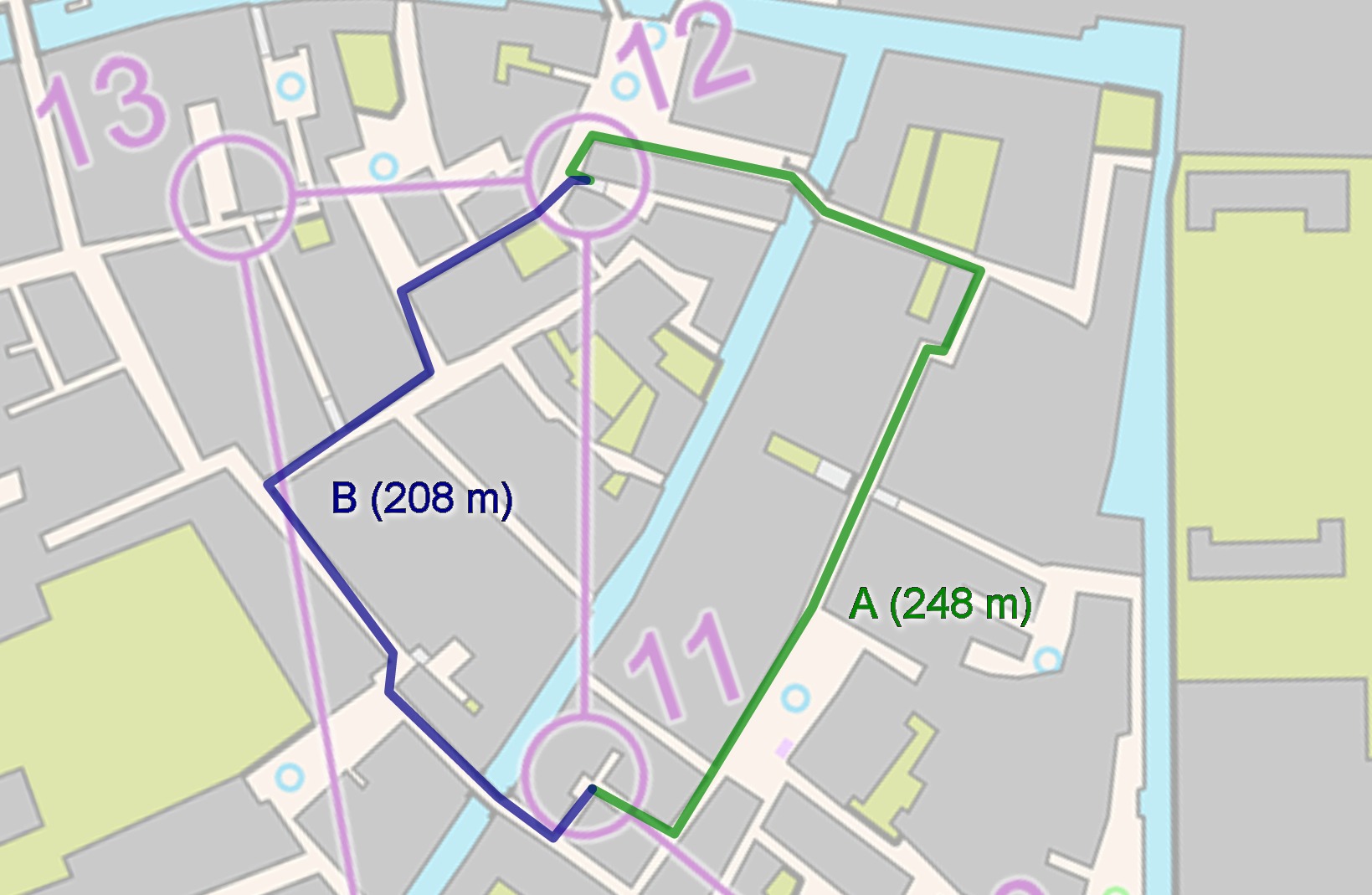 A short which is technically challenging, but without real route choice options. All top women manage well, except for Alm who loses 5 seconds. Alexandersson wins the leg. 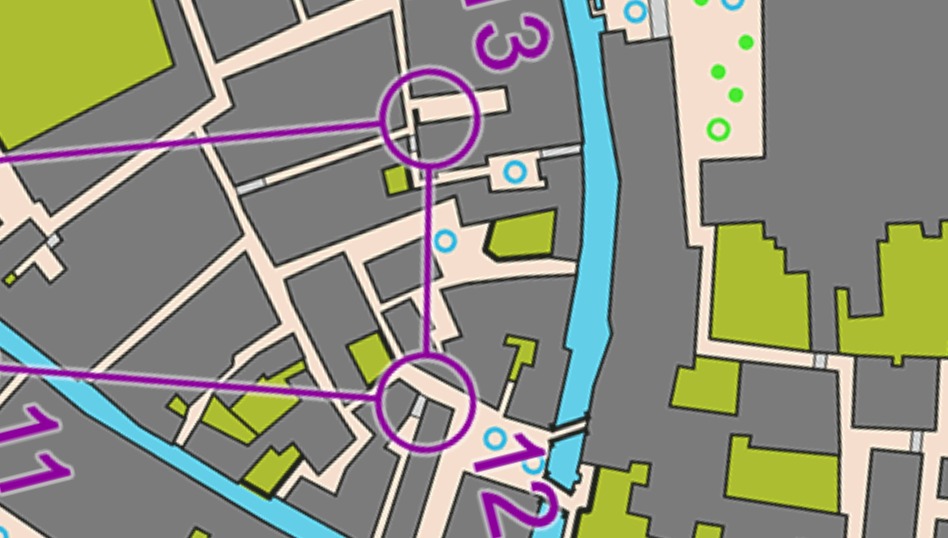 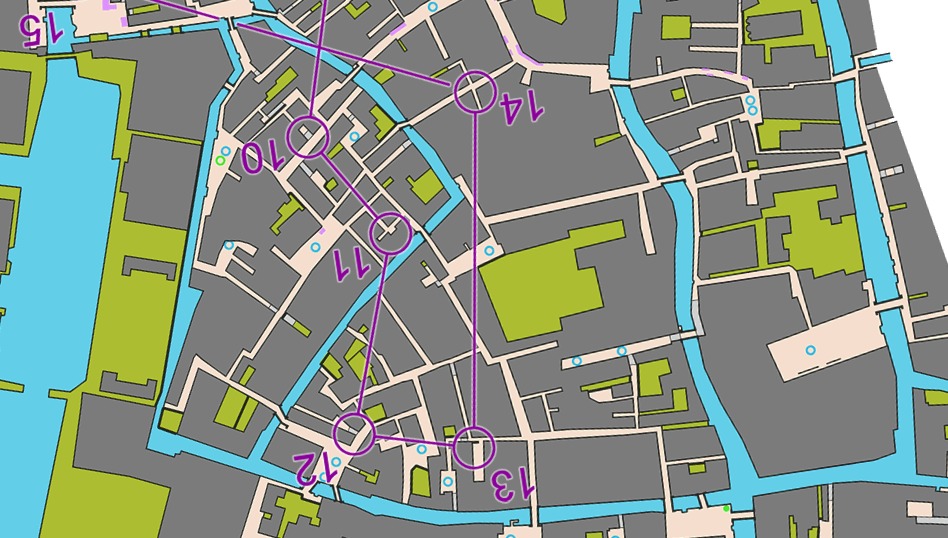 Another long leg without big time losses among the top women – although this is one of the most complex legs in the race. 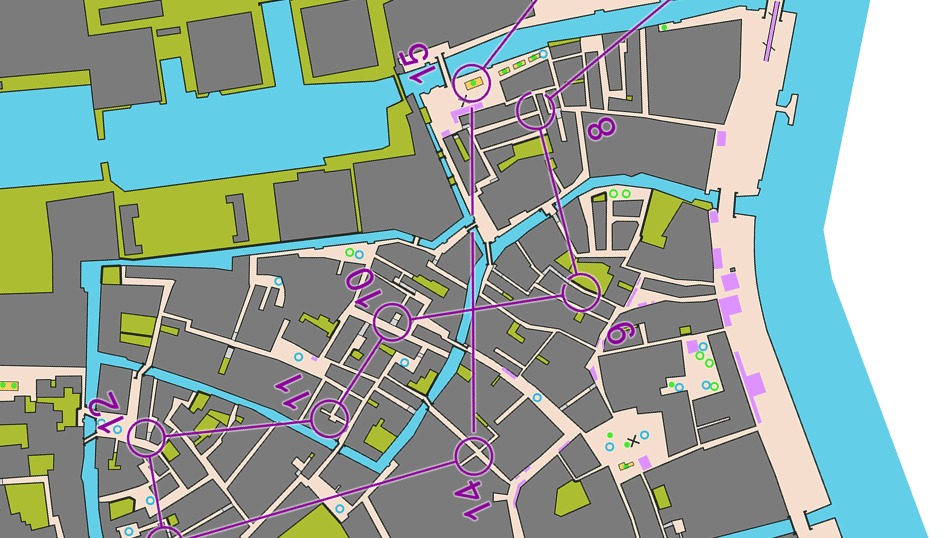 Fast leg without route choices and without complex orienteering – setting up the scene for the last route choice leg. At this point in the race Eliasson is still in shared silver position with Alexandersson – with Alm down in 5th place, 3 seconds behind Eliasson. 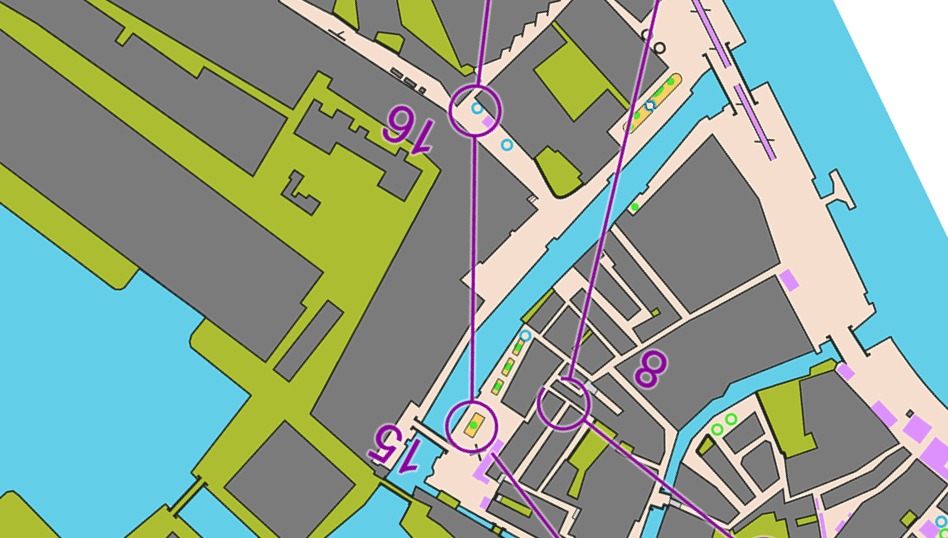 This is the leg where Hubmann lost his gold to Bobach – and in this leg Lena Eliasson loses her bronze medal to Alm. There are two route choice options – A and B – and A is clearly faster. Eliasson loses 13 seconds to Alm but she takes the correct route choice and just gets confused at the bridges. Alm runs the fastest time on this leg, and therefore also overtakes Volynska even if Volynska runs the correct route. Update: Galina Vinogradova runs B and loses 14 seconds – just like Hubmann. See the discussion in the comments. 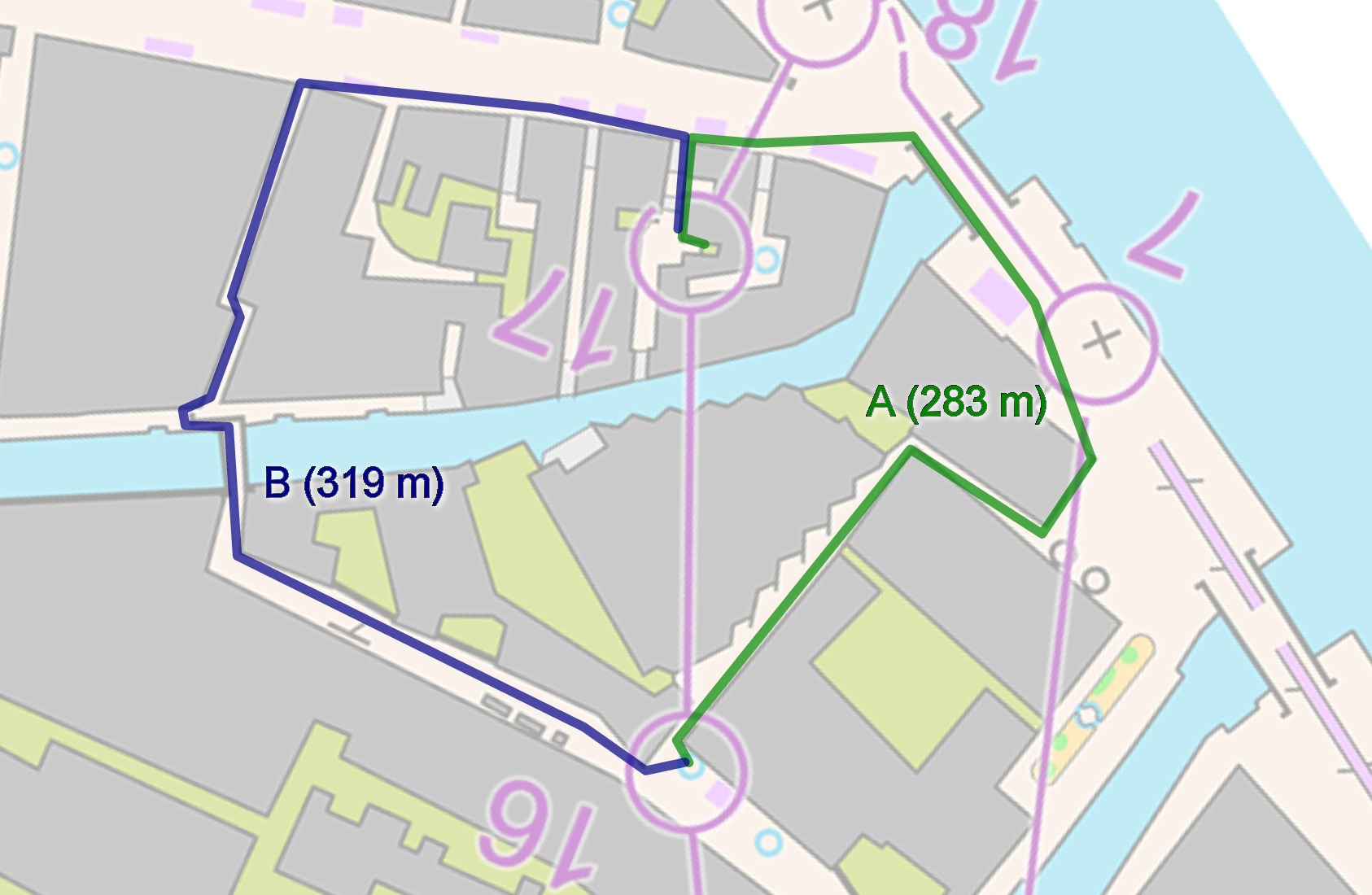 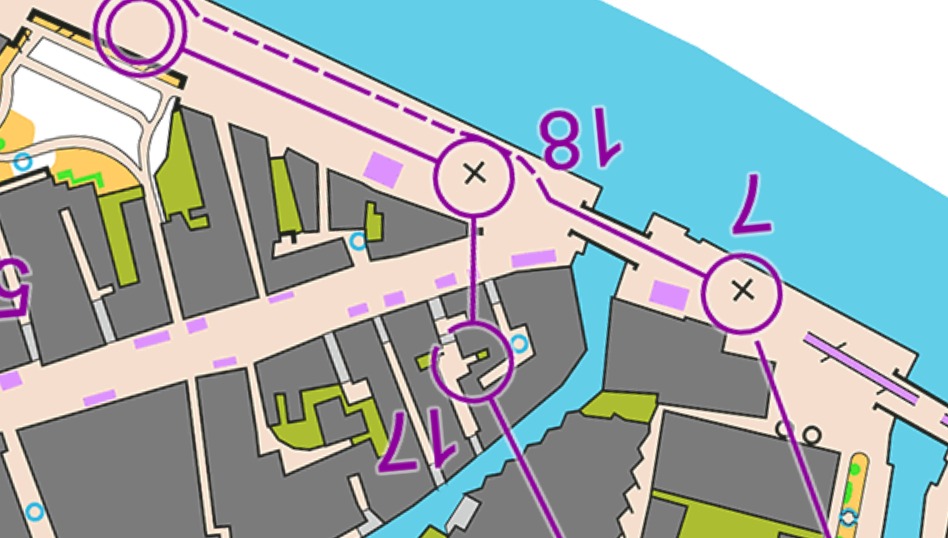 Jan Kocbach is the founder of WorldofO.com - taking care of everything from site development to writing articles, photography and analysis.
@jankoc
Previous WOC 2014 Sprint: Maps and Results
Next WOC Mixed Sprint Relay: Who will take the first gold?