A lot of route choice mistakes by the top athletes made the World Cup Sprint Relay in Halden very interesting to follow. The high pressure the athletes feel in a such an intense relay – combined with the many route choice options – made the relay a tough challenge even for the world’s best sprint orienteers.

Note that the current analysis is based on GPS-data only as at the time of writing split times were only available in a format which would require tedious manual analysis. Thus the analysis has some inaccuracies; however even if many split times are off with some seconds the general trends should be sensible with this much statistical material.

The analysis below is first looked at control by control – and then we take a look at the three most important decision points in the relay. It is good to see that the forking is not important for the decision points – but it still helped split up the teams and force them to do their own choices.

The first control was forked (two variants)- and both the men and the women had the same two controls. In the illustrations below the fastest three runners on each route choice on each variant are shown – with one figure for each leg.  Based on all four legs the runners having the control to the right are faster. The amount they are faster does however vary from 10-15 seconds for the women to 5-10 seconds for the men. Generally the time difference for choosing the wrong route seems to be in the same order as the difference between the forkings. The following seems clear, though: 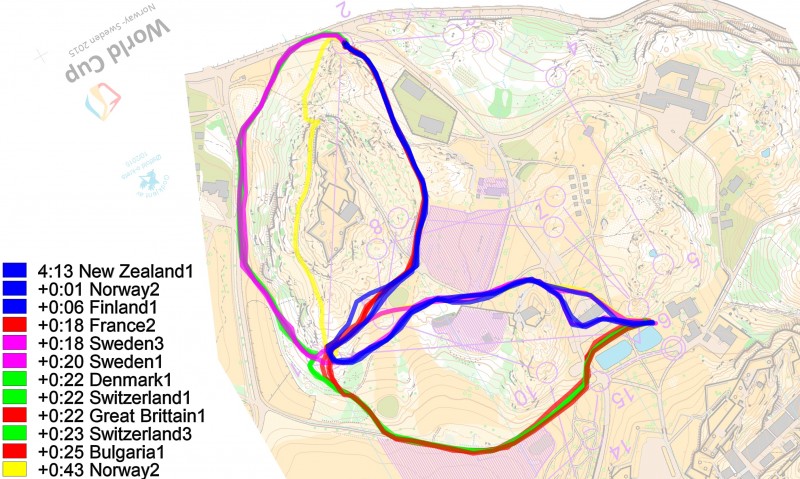 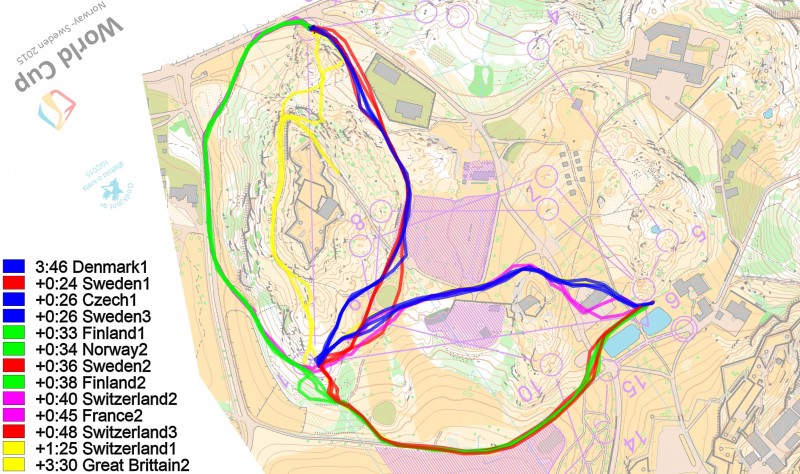 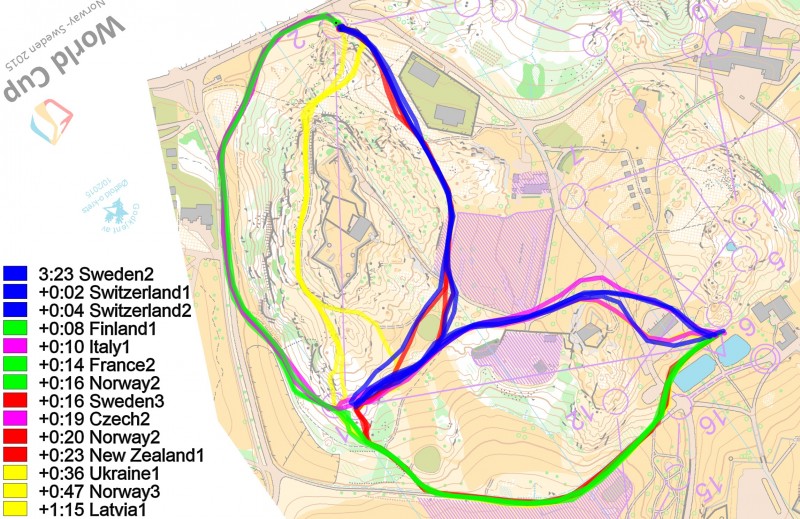 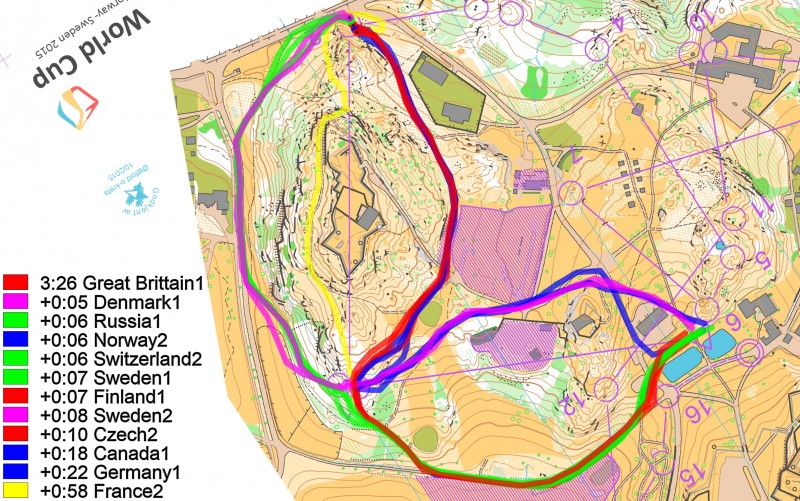 The next forked control was control 3. As for the first control, this was the same for both men and women – and not forked against each other. Below the three best for each control are shown. Coloring is not according to variant like above, but rather according to speed.

The following conclusions can be drawn:

Control 6 is a very interesting control. It was not forked, but based on the way the athletes were running many may have though that it was forked. Analysis: 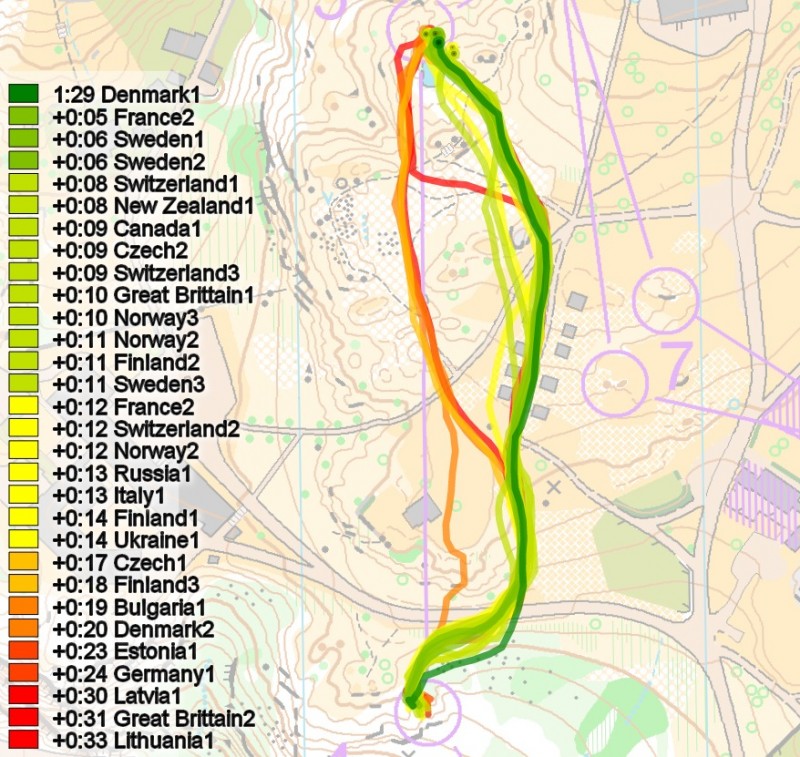 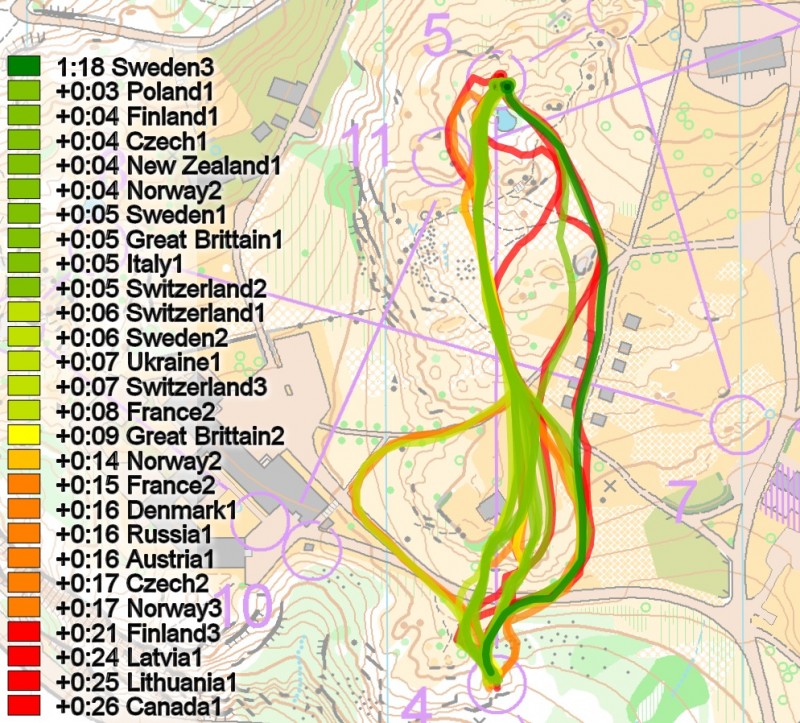 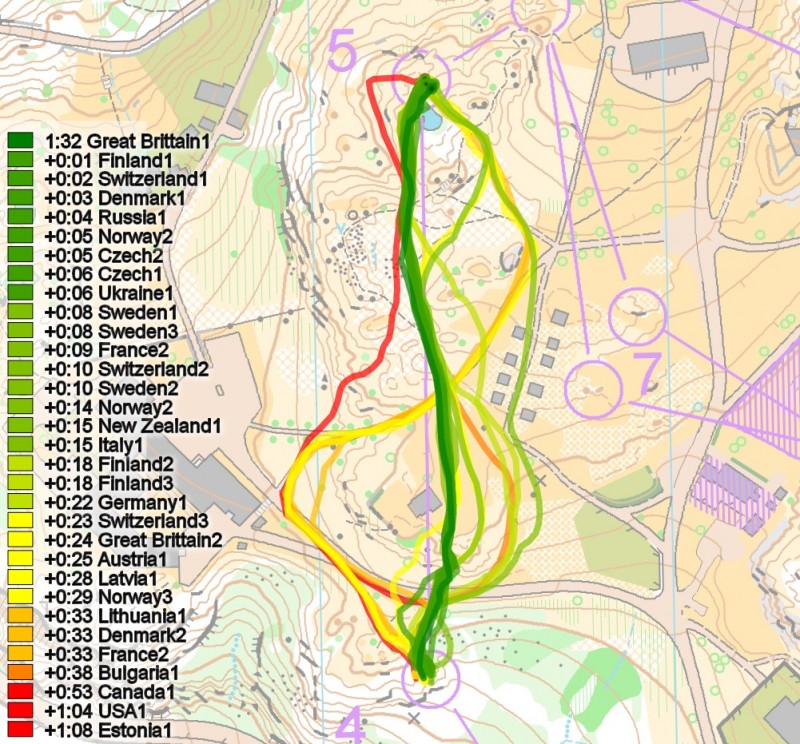 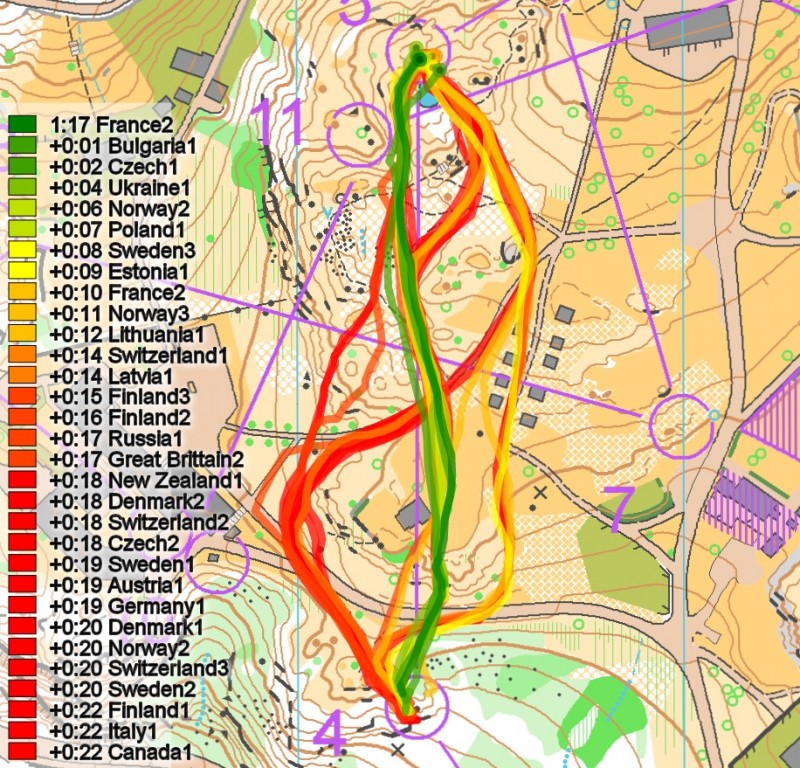 Control 7-8 in the women’s class were forked by having two different 7th controls and 2 different 8th controls. It looks like the lower control is 4-5 seconds slower, but it is difficult to draw any clear conclusion based on the GPS-data.

Leg 10 is another interesting unforked leg. Only the women has this control. The control is interesting because nearly all women found the best route on the first leg – but on the last leg more than half of the field struggled and lost 15-30 seconds. One of these was Sweden 2’s Emma Johansson who lost contact with Sweden 1’s Helena Jansson – and a probable place on the podium. Is it the extra pressure on the last leg which forces so many mistakes here. Or is it the fact that more runners saw each other on the first leg and followed the runner ahead on the first leg? 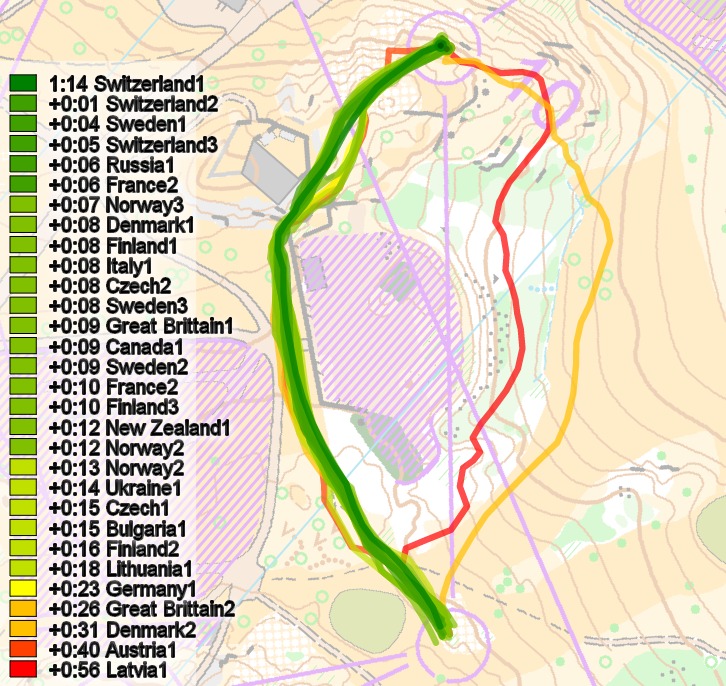 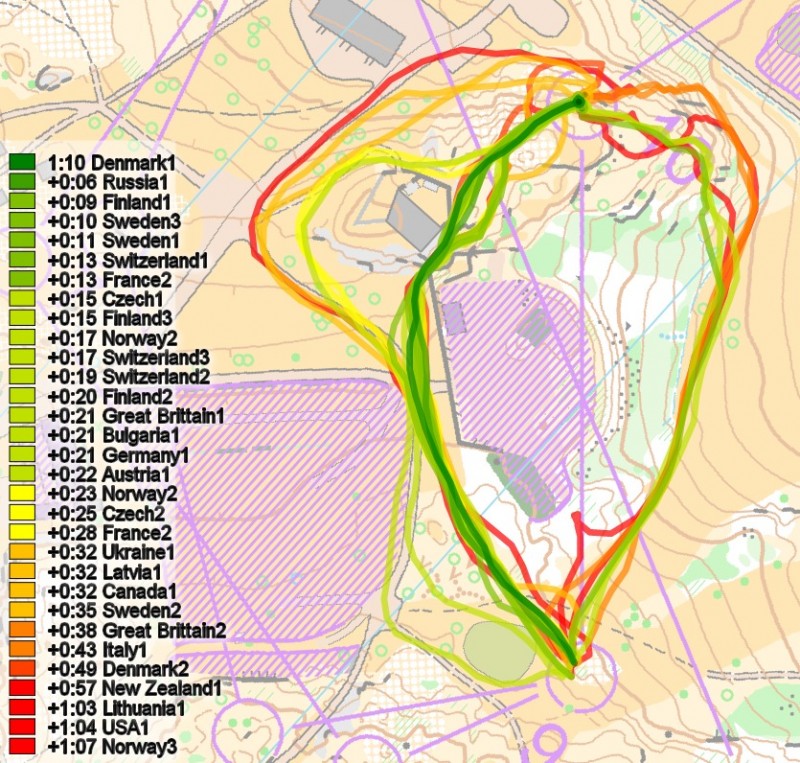 Control 10 in the men’s course was forked. Here the two alternatives were very equal. You could lose some time by running left if you had the rightmost control. 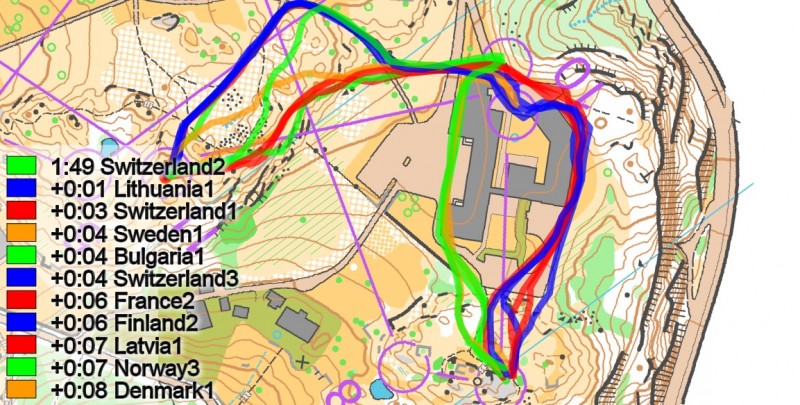 Decision point 1: Denmark out of fight for victory

Denmark was one of the big favourites ahead of the relay along with Sweden and Switzerland – but on the third leg reigning sprint World Champion Søren Bobach lost contact with the leading teams after being sent out some seconds behind. The two autO-analysis below show why Bobach loses more than a minute – and only a fantastic race by Emma Klingenberg saves the podium. 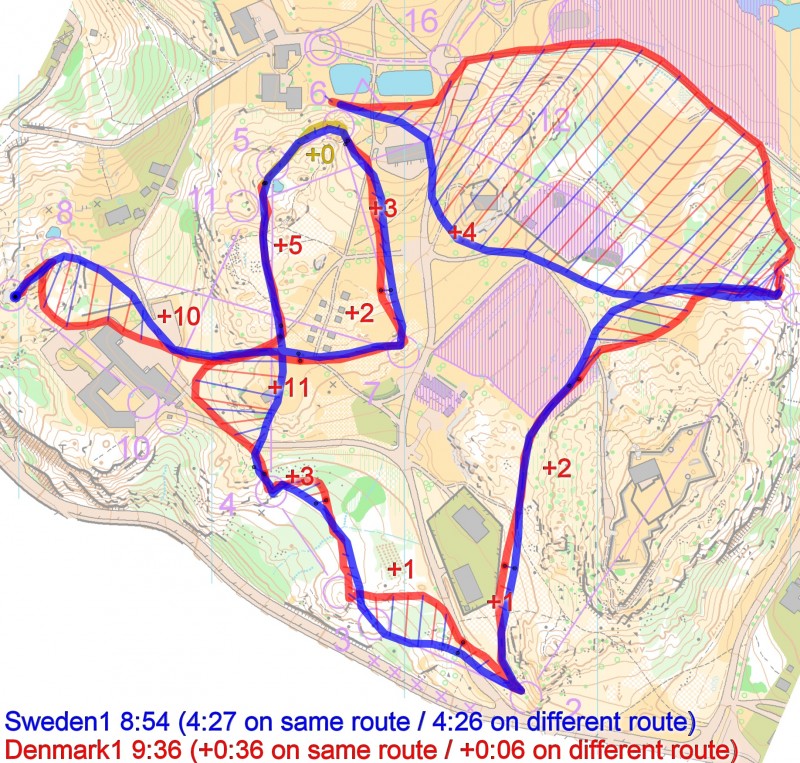 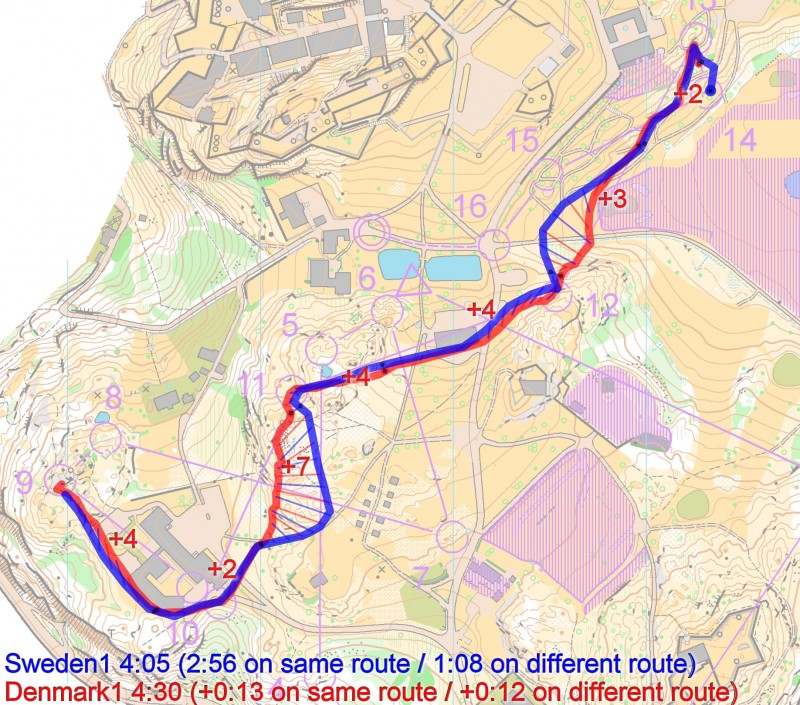 Switzerland’s Judith Wyder headed out onto the last leg ahead of Emma Johansson (Sweden 2) and Helena Jansson (Sweden 1). At control 2 Jansson had taken over the lead with a 10 second gap to Johansson – Wyder was suddenly a minute behind. This was not due to a forking difference – the teams had the same forking. It was rather because Wyder took an unfortunate route choice – and then lost even more time because she did not manage to get down the steep hill. 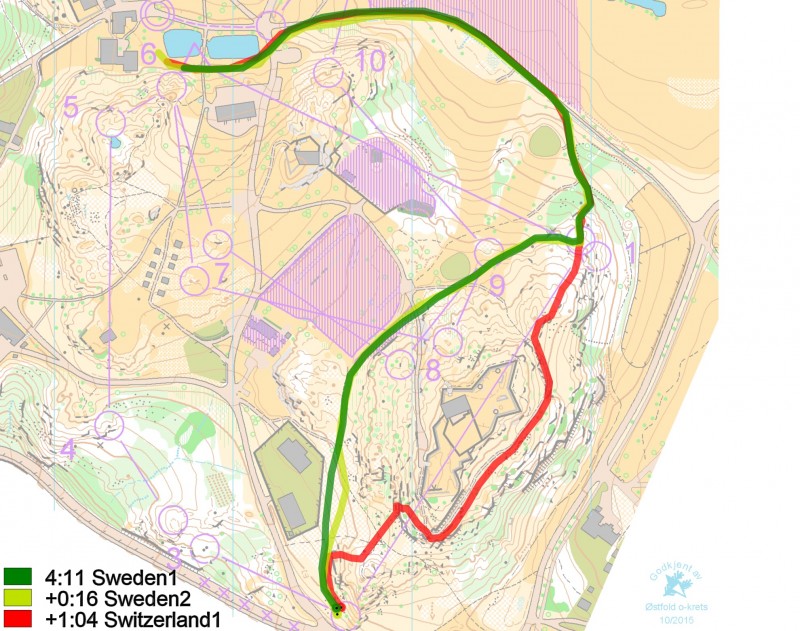 The third decision point is where Emma Johansson definitely loses contact – on the way back to the spectator control. Johansson does probably not see the narrow passage on the leg to control 10, and loses nearly half a minute to Jansson. Wyder (who is far behind at this point) goes right and has about equal time to Jansson. After this control there was only one team left in the relay – Sweden 1 with Helena Jansson. 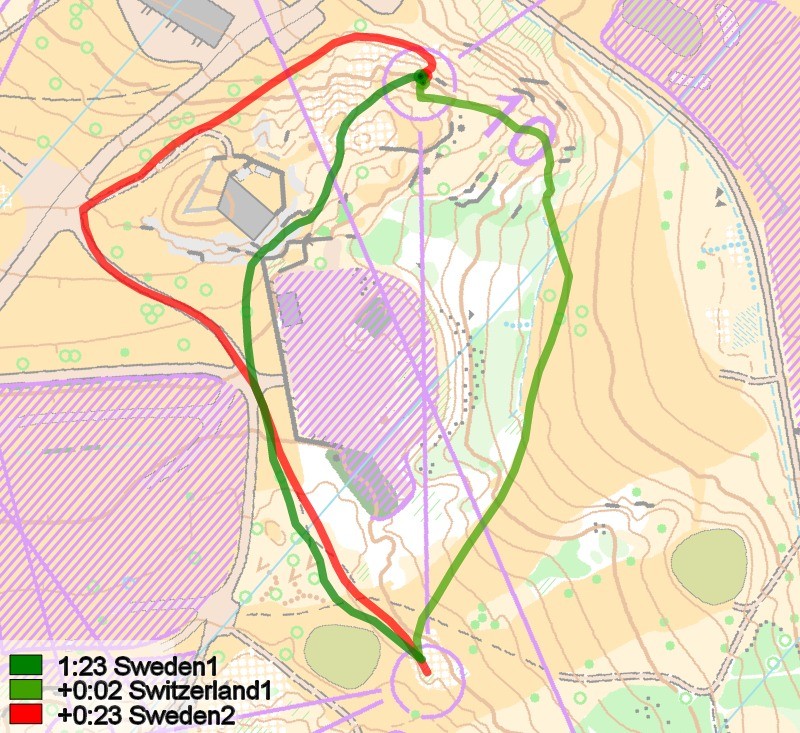 The Sprint Relay format and GPS-tracking

As the GPS tracking worked perfectly in the terrain around the Fortress in Halden, it was for once possible for the spectators at home or the spectators at the arena (equipped with a smartphone/pad with GPS-tracking, as there was no big screen) to see exactly how and where the relay was decided. This is contrary to several earlier sprint relays in dense urban areas where the GPS-tracking has not worked at all – for example the World Champs in Trento last year. Thus until there is positioning technology available which works in dense urban areas, one should seriously consider to at least have part of the courses in the Sprint Relay discipline in areas for which GPS tracking works flawlessly.