A long leg in one of the most beautiful races this year: Today’s leg in Route to Christmas is presented by Aleksandr Kratov – and is a leg some of you might have taken a look at already. The leg is the long leg (leg 8) in the H21E course from picturesque World Cup Long distance in Arosa at October 2nd 2015.

It was one of the most beautiful races this year

– It was one of the most beautiful races this year, yet really tough, Kratov begins his story about this leg. – There were plenty of good legs with tricky route-choices but the longest leg (7-8) was the one to think about a little extra.

And this is the leg chosen for today’s edition of Route to Christmas. The leg is as usually first provided without routes – you may take a look at it and think about how you would attack this leg (if the image is too small, you may click on it to get it larger): 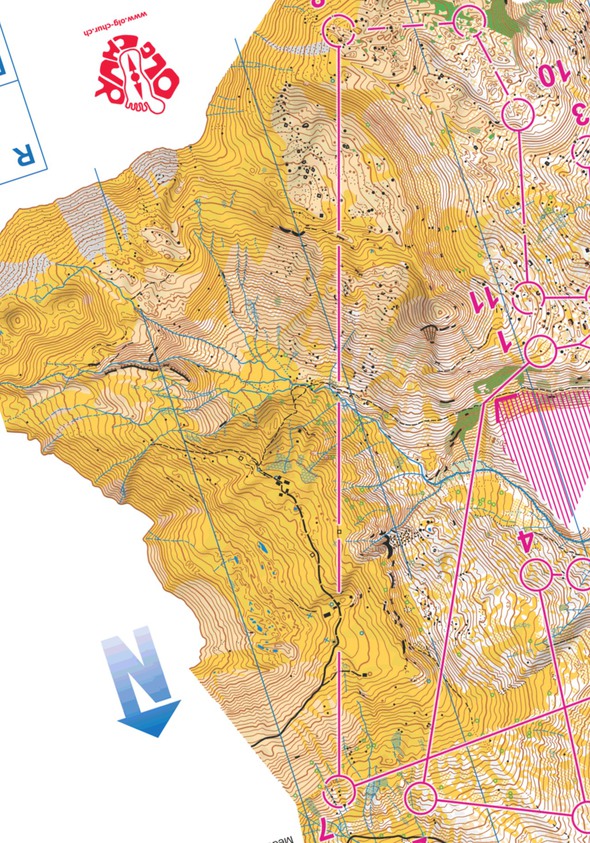 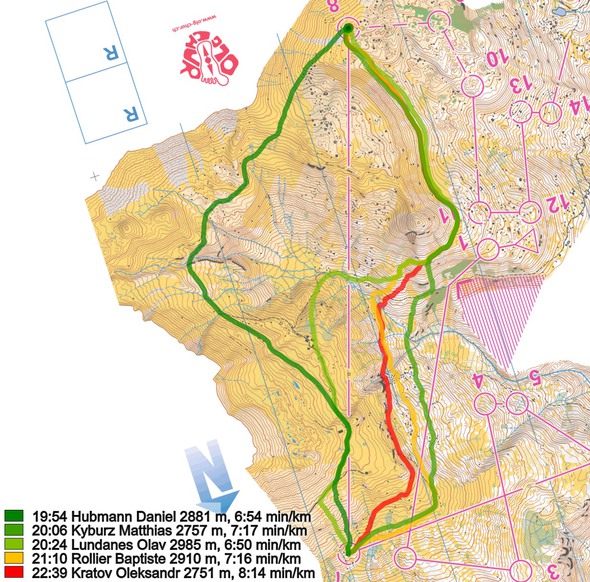 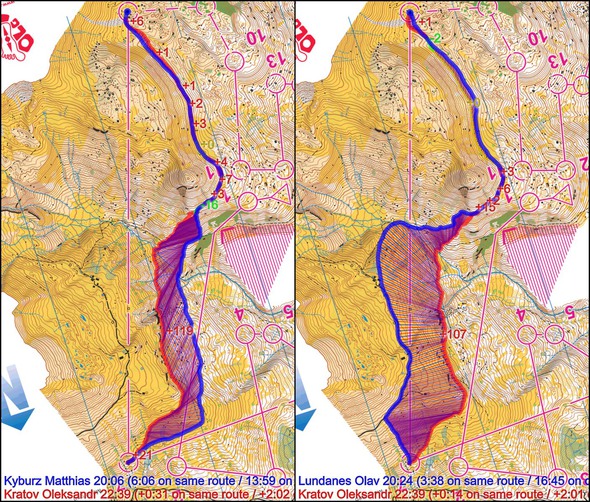 Here is Kratov’s take on the leg:

At that point of the race I already had quite a good image about the steepness of the local slopes, that is why at first I decided not to go west from the line and cross the valley, but to go east and stay in the open land all the time. But while already moving uphill I just counted how many thick curves I was going to drop on the way down to the control. It was so many that I’ve changed my mind and went west.

It was quite a good choice after all but the problem was that I have climbed some extra height while considering different options and lost about 1 min already in the very beginning of the leg. Right now I would take the east-from-the-line route-choice. It is a lot of climbing but it is steep just in the beginning then it is runnable, plus you get a lot of “free” time to plan the rest of the course.

When you compare Kratov’s route with the routes of Olav Lundanes (going higher) and Matthias Kyburz (going lower), you see that Kratov loses nearly 2 minutes to both at the first third of the leg. This is partly due to the extra climb at the start of the leg, and partly due to going down and up again closer to the middle of the leg.

Looking at the overall best route at this leg, there is only half a minute between the three main route choice alternatives on this leg; left, middle and right. Adding to this, Carl Waaler Kaas (GPS problems) ran straight not too far away from Lundanes’s choice in a time faster than all the others. Thus the direct route of Lundanes is probably the fastest on this leg.

On the other hand there were very small time differences between the three best alternatives on this leg – however very few managed to perform well through all the leg, and thus this leg is actually more about going having a good enough plan with enough details, and then go through your plan accurately.

Comment from the course setter Marcel Schiess:
The route taken by Carl and Olav is not even on my list of possibilities… In the beginning of the „stable phase“ with this course I assumed that Daniel’s route would be the fastest option (plus that you have time to prepare for the next tricky controls). In the week before the the race I changed my mind and I was absolutely sure that the route taken by Matthias Kyburz would outperforme all the others. The outcome in the end was then a BIG surprise for me: VERY different routes withing a few seconds.

Jan Kocbach is the founder of WorldofO.com - taking care of everything from site development to writing articles, photography and analysis.
@jankoc
Previous Vote for Course of the Year 2015 now!
Next Route to Christmas: Day 3 2015