Both won their second gold medal at this championships – Alexandersson in long and middle and Kyburz in sprint and middle.

Alexandersson in own class

Alexandersson ran fast and also had a good technical race – leading to a very clear victory with more than 2 minutes down to Judith Wyder (Switzerland) in second and with Marika Teini (Finland) in third. Alexandersson Tove lost 16 seconds or less to the leg winner on all legs – that was least of all runners in this race. Wyder had a mistake of more than 2 minutes at the third control – and managed to keep Alexandersson’s speed from there to the finish and secure a silver medal.

In the men’s class, Gustav Bergman (Sweden) took the silver medal after a very strong race – 34 seconds behind Kyburz. Except for the 14th control, Bergman looked like a winner. But the one minute mistake at the 14th control was enough to make the gold go to Switzerland. Bronze medal went to Lucas Basset (France) at +0:51- his second championships medal on the middle distance in a row. Lucas Basset lost 18 seconds or less to the leg winner on all legs – that was least of all runners in this race.  The fight for victory was close; Bergman Gustav (lost 57 seconds at leg 14, finished 34 seconds behind in 2nd) was only one control away from beating Kyburz Matthias. 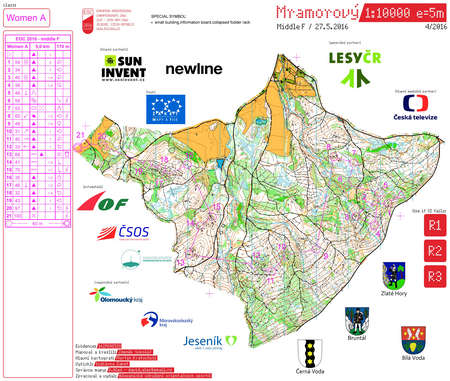 Jan Kocbach is the founder of WorldofO.com - taking care of everything from site development to writing articles, photography and analysis.
@jankoc
Previous EOC Middle Qualification 2016: Maps and Results
Next EOC 2016 Relay: Maps, Results and Analysis