The Swiss runner Hadorn takes the title due to high running speed and a consistent race (except for this long leg). Hadorn won 7 of the 20 legs – and even if he slowed down towards the end, his lead was big enough to take the gold in the end.

[This race analysis is a cooperation between the JWOC organizers and WorldofO. Thanks to the JWOC organizers for excellent service – including long and useful discussions with the course setters. In this analysis we first show a few key points in the race development, then do a brief overall analysis, before taking a very thorough leg-by-leg analysis. ]

The first important point in the race is leg 2-3. This is the leg were silver medalist Curiger looses most time – 10 seconds – one second more than he was away from the gold in the end. The time loss to Hadorn is not due to route choice (they run the same route), but due to some small navigational problems. 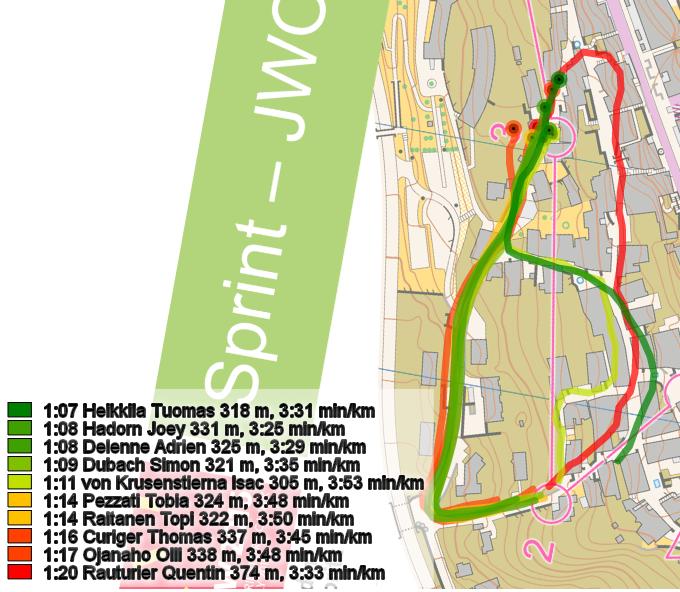 The next important point in the race is the long leg from 7-8. Here Hadorn runs around to the right and looses 27 seconds to the best time (only 51st best split time). This could have cost him the gold medal, but the rest of his race was so good that he could afford this. Hadorn is the only one of the top runners who runs to the right, but quite a few runners further down on the result list run right and loose a lot of time. However, also many runners running straight loose time due to problems with navigation in the area with artificial fences. See more discussion on this leg in the leg-by-leg analysis section. 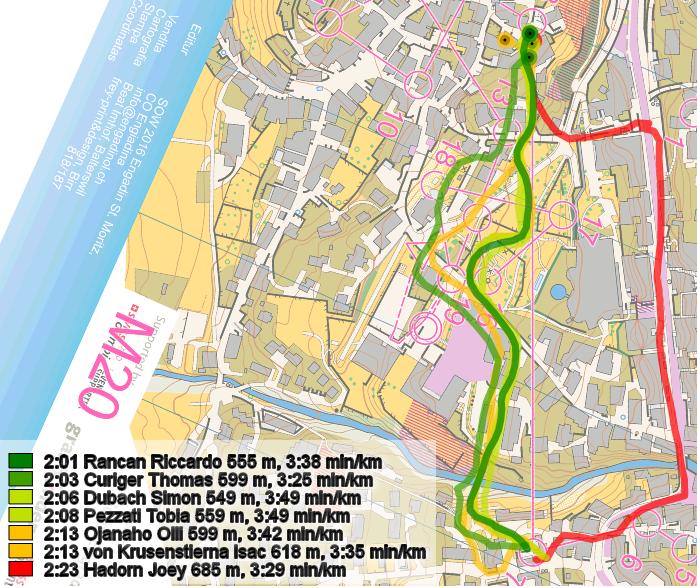 The next important point is the leg from 16 to 17. Before this leg Simon Dubach is in second place – but a wrong routechoice here costs the Swiss more than 20 seconds to the best split times – and a certain medal. The artificial fences were tricky to handle for many of the competitors – especially towards the end of the race. 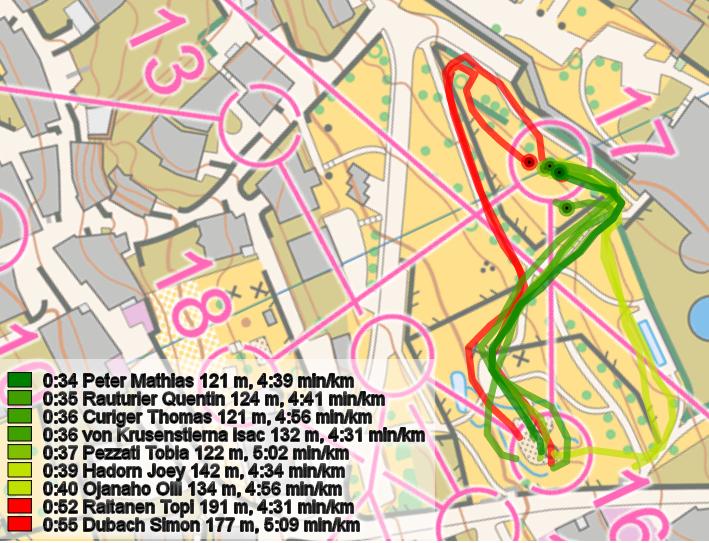 The below graph shows the battle between the top 8 runners. After 4 minutes of running . before he long leg – Hadorn is in the lead. After the long leg he looses the initiative, and New Zealand’s Tommy Hayes takes over the lead for several controls. Simon Dubach is also up in the lead briefly, before Hadorn takes over the lead 3 minutes before the finish and keeps the lead all the way in. 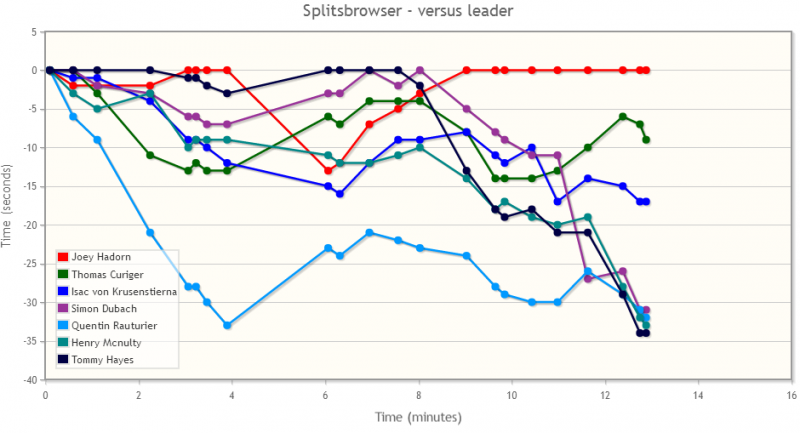 Below is an analysis of the race leg by leg – for each leg showing the blank map and the map with route choice alternatives (including lengths). For the most interesting legs, GPS-data is also shown. Note that the GPS-data from the sprint is quite poor, but it is good enough to (usually) understand which route each runner took. The split times shown in the GPS-analysis are actual split times from the official timing system – and these are thus accurate even if the GPS-data is not. Split times and current standing for each control are also shown in a separate table for each leg. 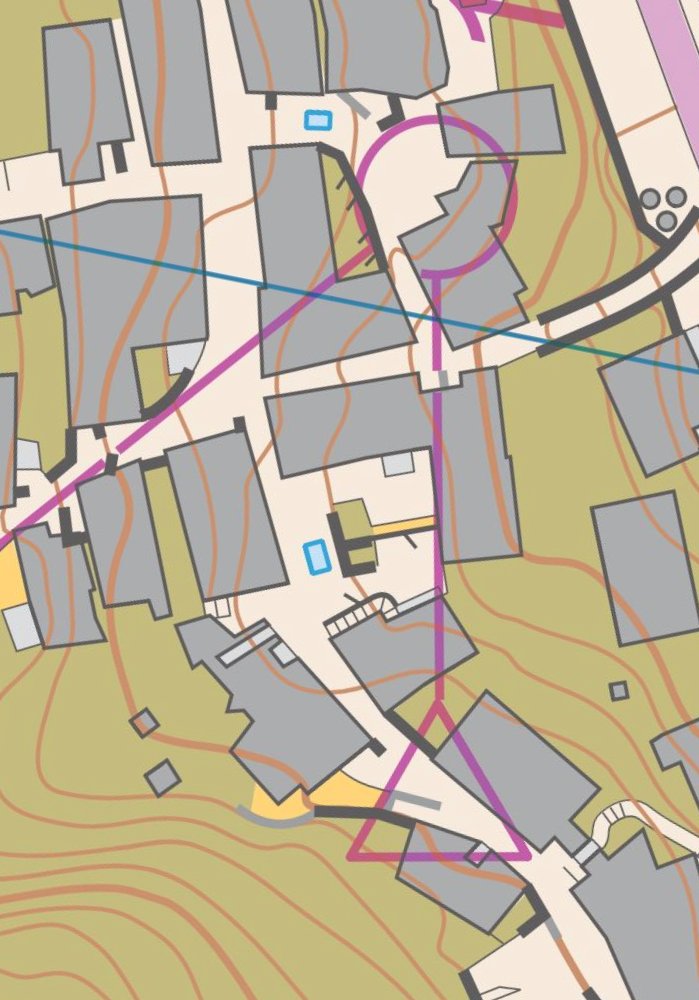 Analysis: The first leg is not about route choices, but about navigation. All top runners get well into orienteering in the narrow streets of Scuol except for Rauturier who looses 6 seconds, the rest of the top runners are within a few seconds. 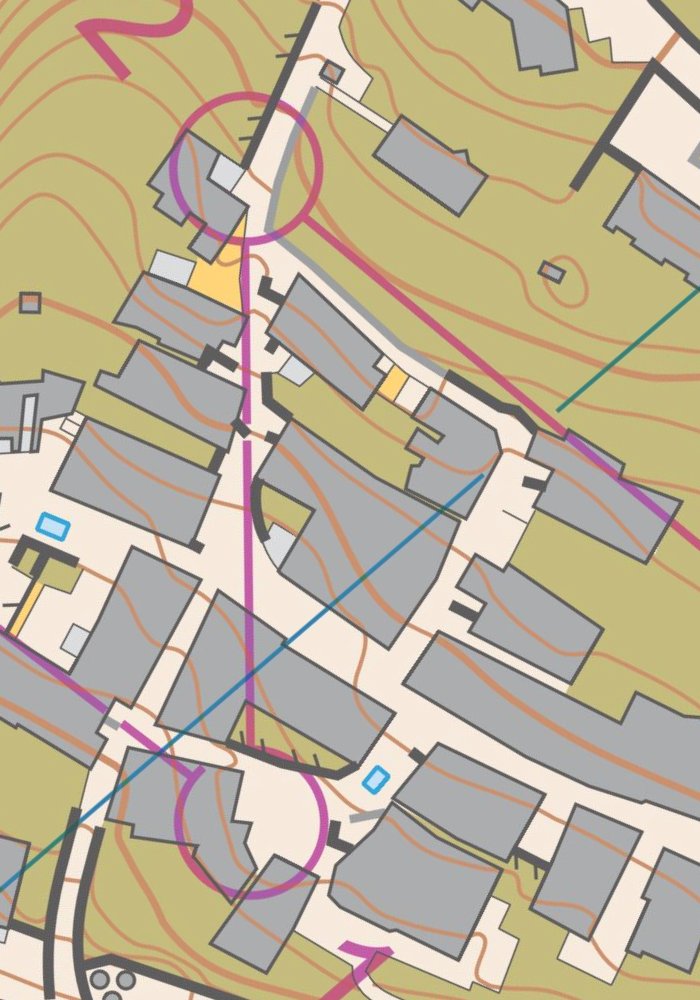 Analysis: Again a leg which is more about navigation than about route choice – many loose 4-5 seconds here even if the route choice differences are maximum 1-2 seconds. The middle variant (C) is the fastest route, left (B) is slightly slower (shorter but 4 meter extra climb). Curiger goes to the right and looses 4 seconds to the best split (longer route). 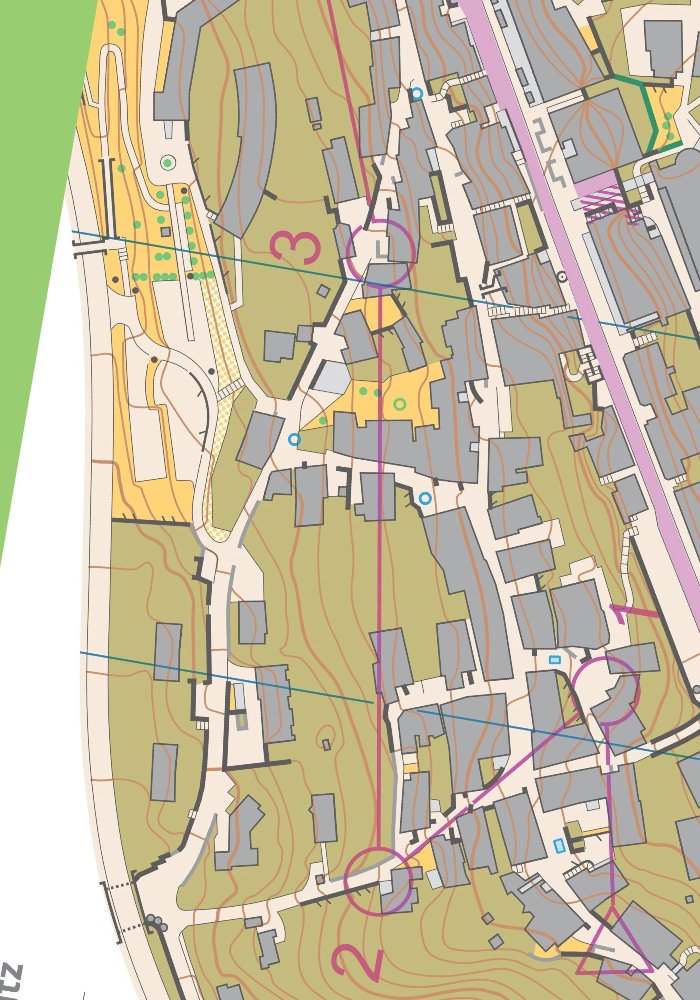 Analysis: There are three main route choice alternatives on this leg: Left, middle (in an S, crossing the line between the controls) and right. Nearly all runners choose the leftmost variant which gives you some more climb, but the orienteering is very easy, making it possible to read ahead. The fastest route is however to turn around at the control and run back – taking the C-variant on the map which is both shorter and with less climb. It does go in an S though (crossing the line), which might have put some runners off this route. Heikkila and several other runners who are placed further back overall, run good times using this route. Going all the way to the right gives you 75 meters more running, but without saving significant climb. Rauturier goes all the way right which is significantly longer, and looses another 13 seconds (third leg in a row where Rauturier looses time). Looking at the GPS from all runners, you can see that quite a few runners go into the course setters trap going right – and loosing significant time.

This is the first time Hadorn is in the lead. 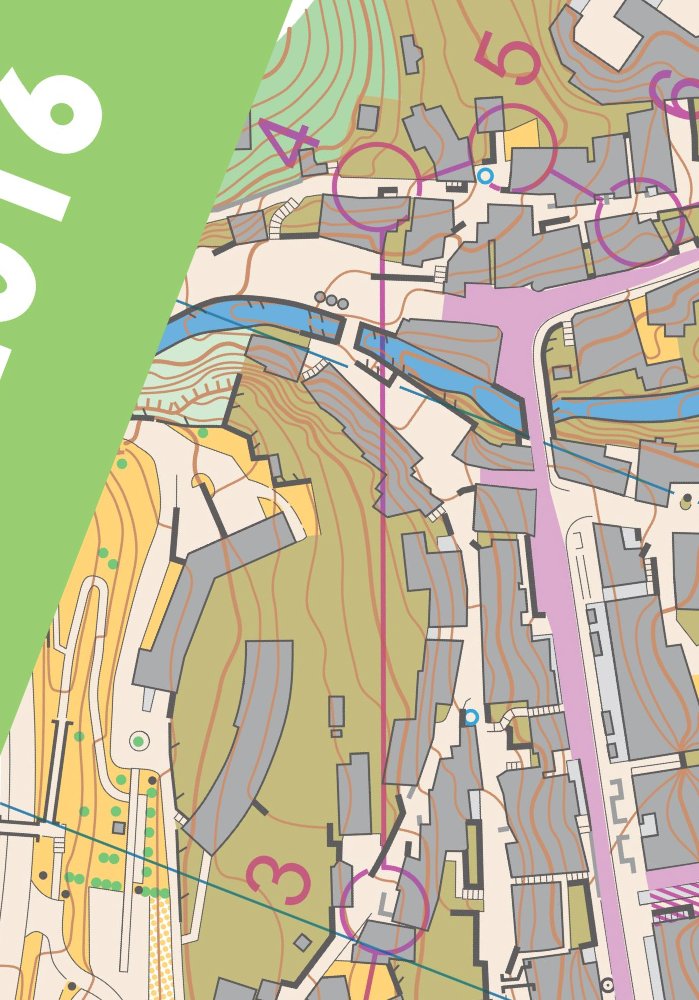 Analysis: A leg for fast runners. Only a small route choice at the end of the leg, but it does not look like left/right here gives any significant time difference. Hadorn shows his running skills and is very fast. von Krusenstierna looses 7 seconds – Rauturier another 9 seconds. 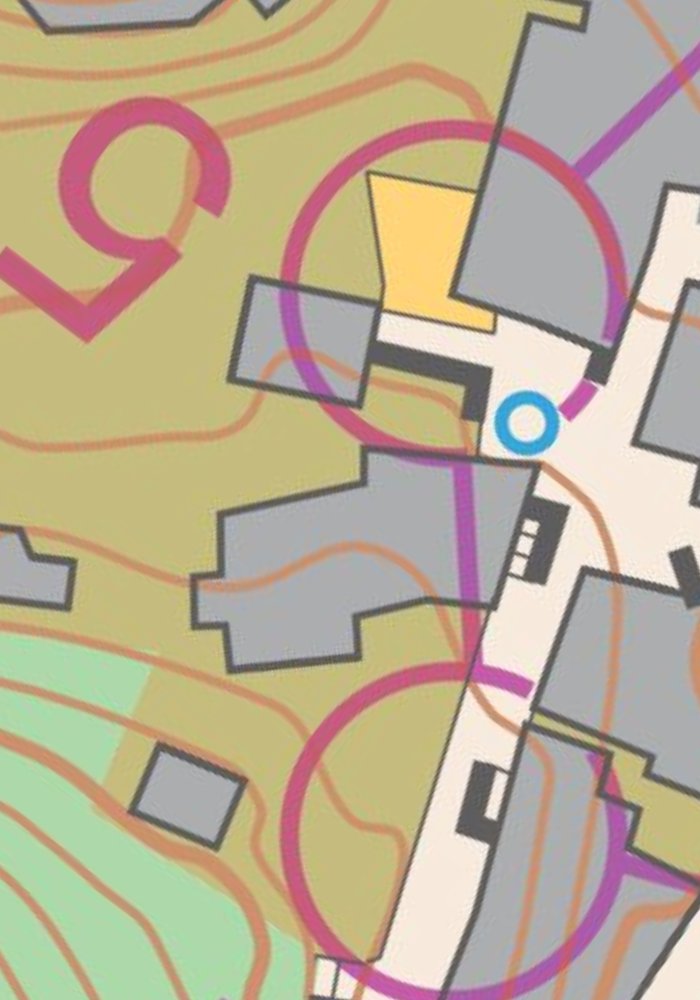 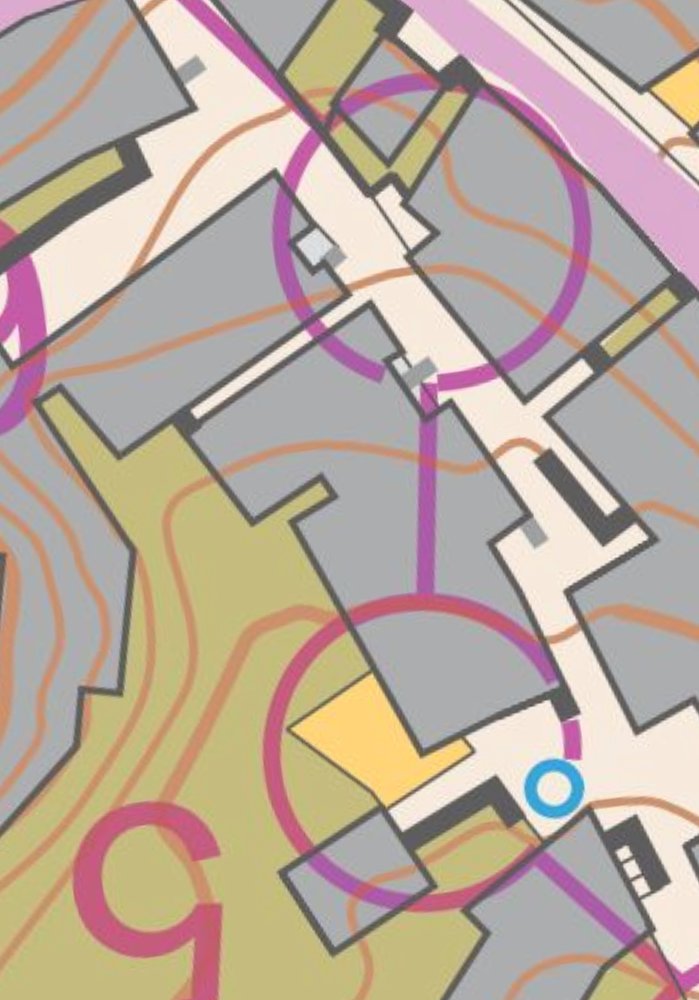 Analysis: Short leg without route choice. All top runners within 2 seconds except for Rauturier sho looses another 3 seconds. 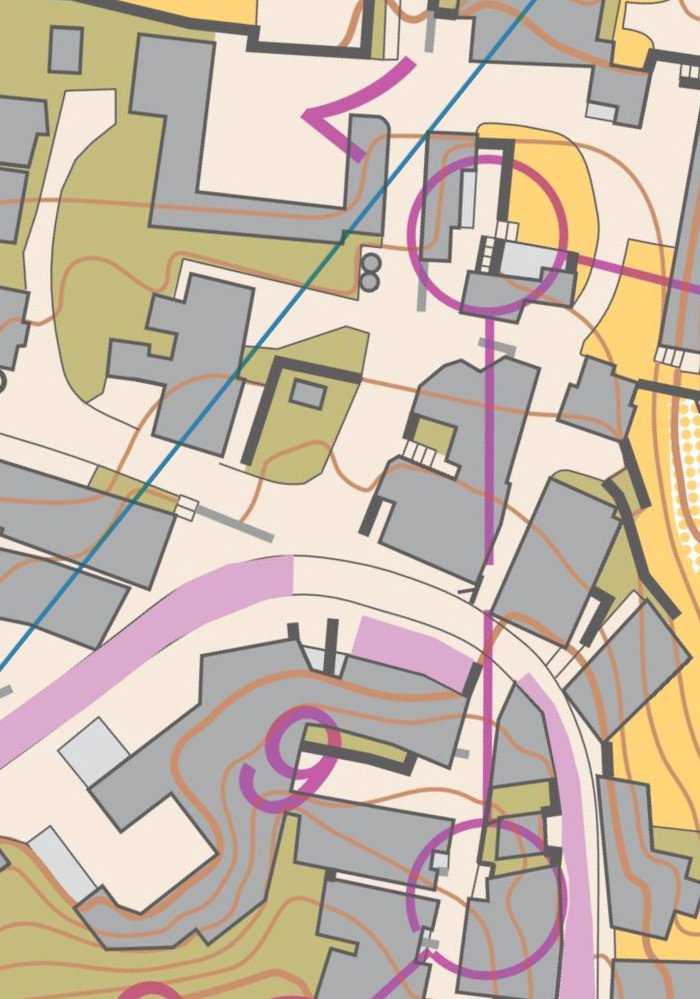 Analysis: Small route choice difference here. Going left is slightly faster – you loose some 2-3 seconds by going right due to the 2-3 meters extra climb into the control (up the stairs). Nearly all the top runners go right, though. Another timeloss of some extra seconds for Rauturier. 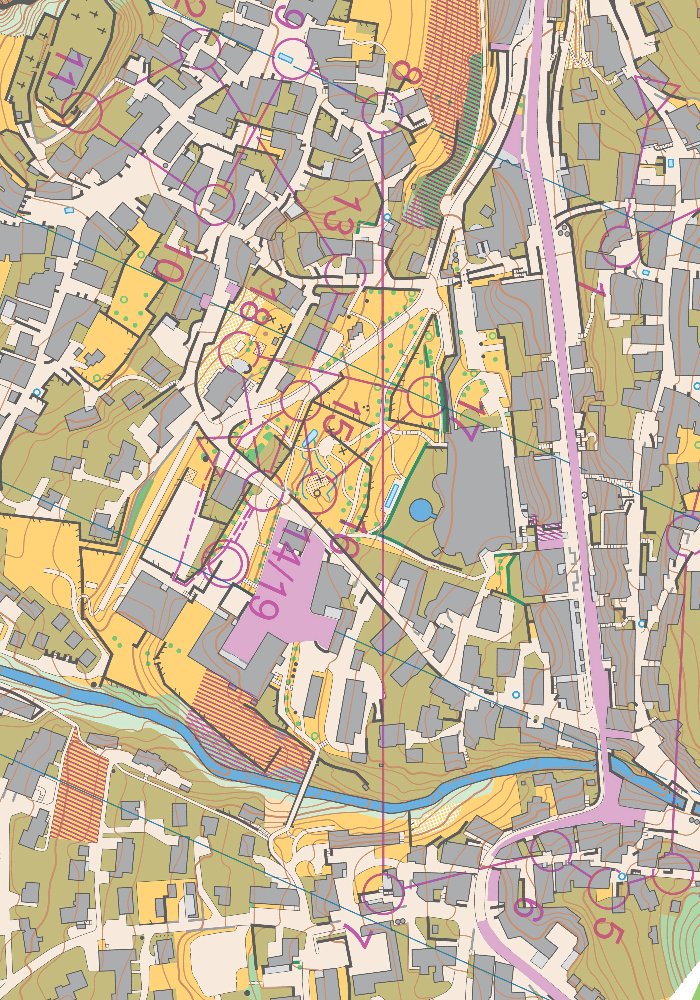 Analysis: This is the longest and most decisive leg with respect to time differences. Although there is significant time to loose by taking the wrong route choice (like Hadorn who goes right and looses 27 seconds to the best split even with a perfect execution), many runners loose time here due to bad execution or taking the wrong micro route choice in the middle part of the leg through the park. It seems like the articifial fences in the park were problematic for many of the runners – many reported about stopping somewhere on the leg due to not understanding the map or where they were. Both von Krusenstierna (lost 17 seconds to fastest split), Ojanaho (also +17) and Raitanen (+24) ran close to the best route, but still lost significant time. The fastest route is going as close to the line as possible, running an S through the park. Curiger runs just below the park, avoiding this small difficulty, and does not loose much time. Fastest on the leg is New Zealander Hayes who ran without a GPS. Going right might have its advantages, though: You have time to plan ahead the rest of the course, a task the winner Hadorn focused on.

Hadorn had a 3 second lead ahead of the long leg – now he falls down to 6th place, 13 seconds behind leader Tommy Hayes. 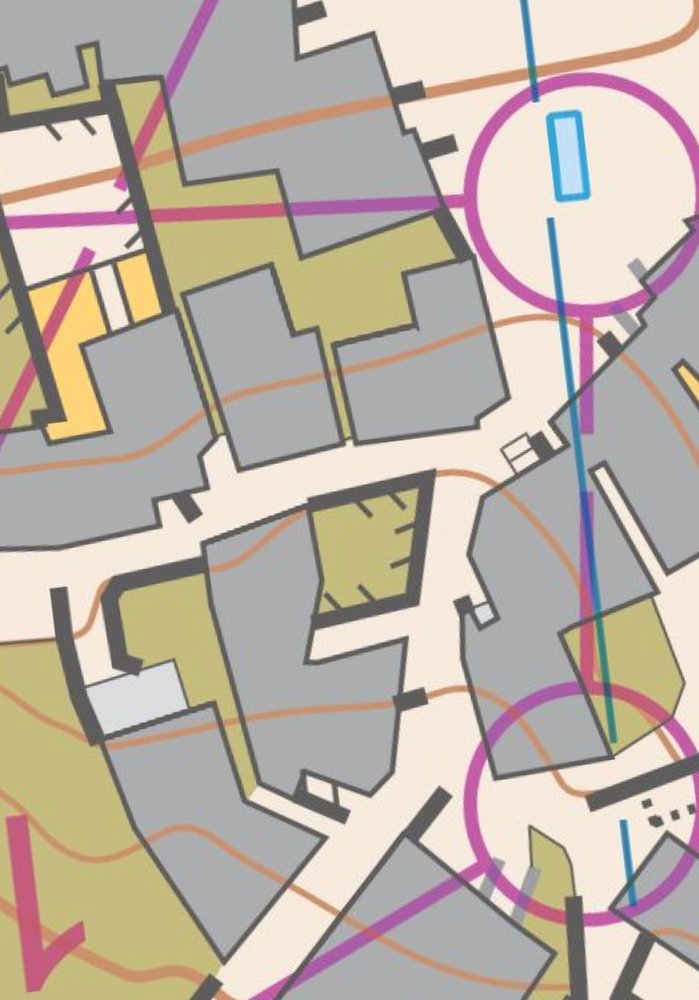 Analysis: There are only small timelosses here. Note that the control is placed here (and not further to the right were it could have given a nice route choice leg) due to TV. 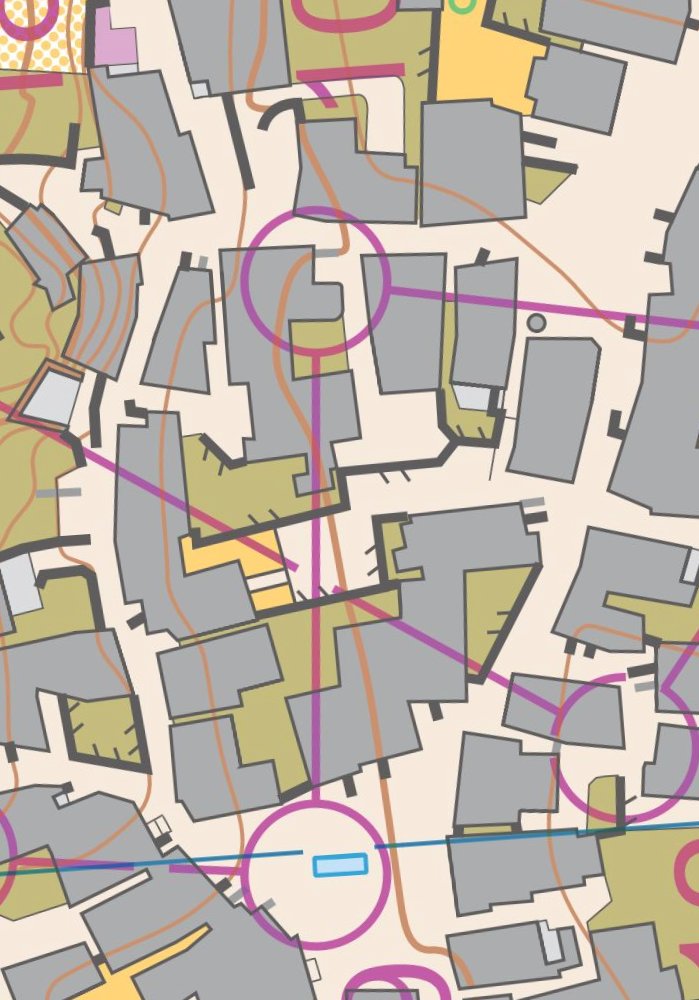 Analysis: Small time differences between the two routechoices – but makes the runners busy. 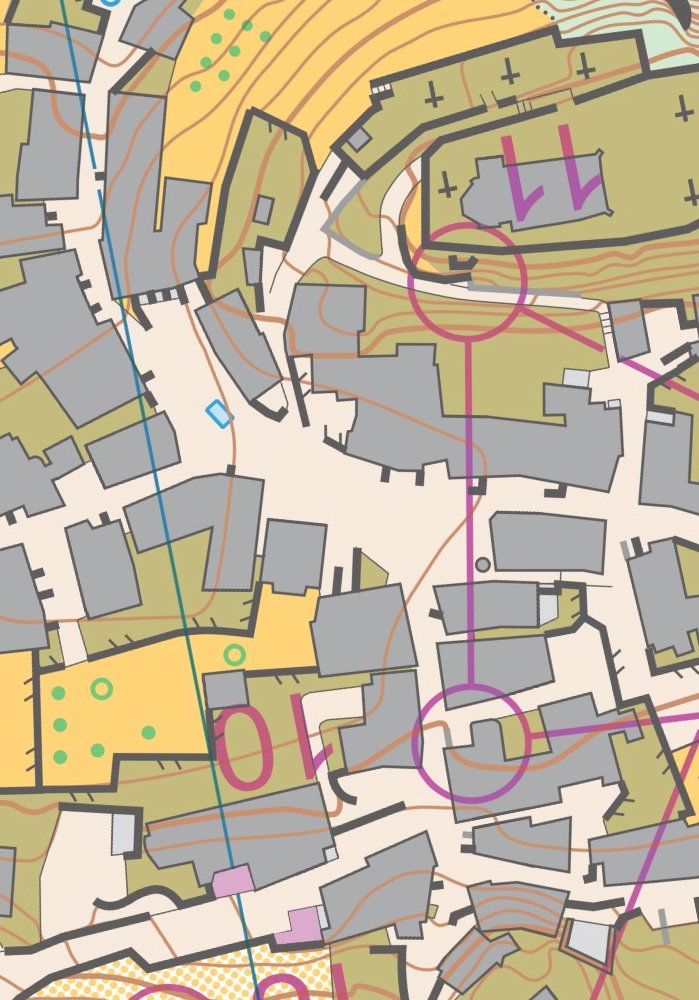 Analysis: Quite straightforward leg with two route choices which seem equivalent (1 second difference between best runner running left and right) – still many loose 3 seconds or more here due to the uphill. Runners starting to get tired? 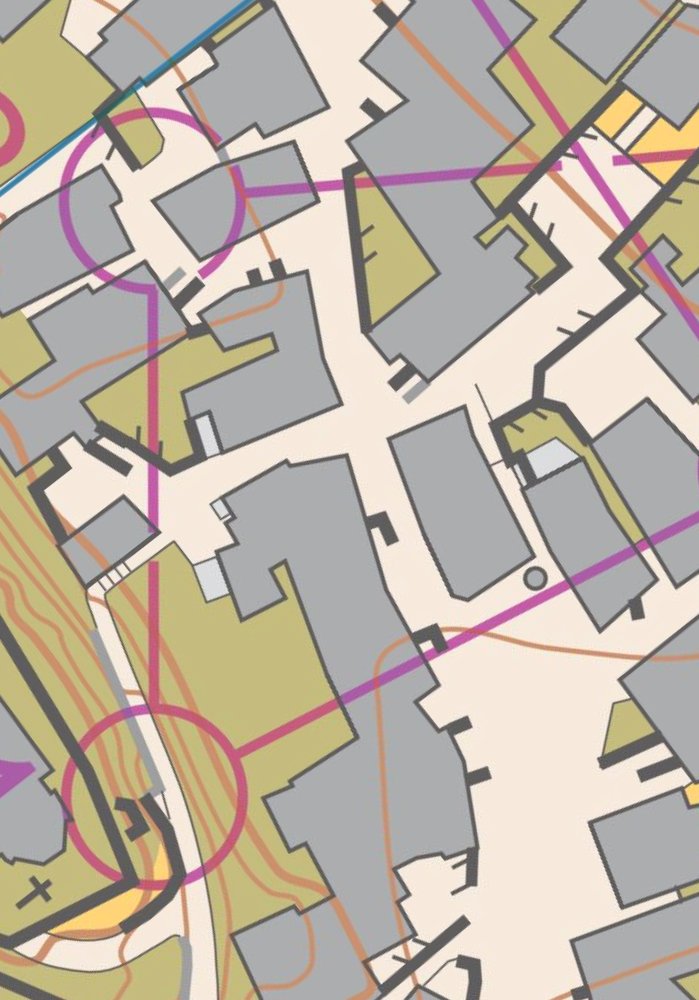 Analysis: No big route choice differences, need to be accurate though. 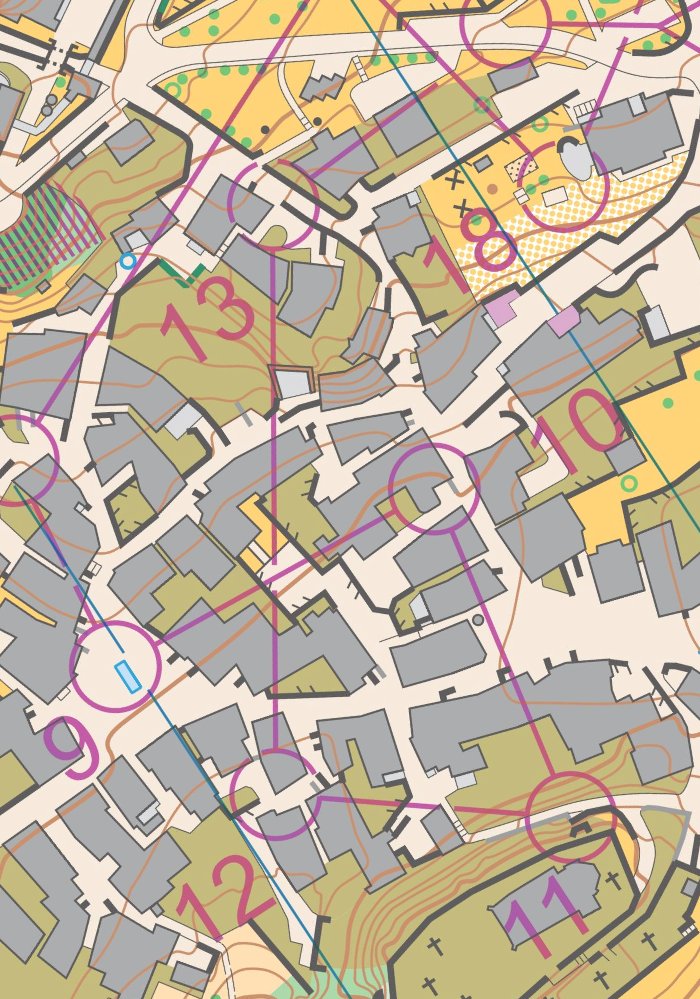 Analysis: Hadorn runs a fantastic leg, winning the leg with 2 seconds on a route choice to the right. The four best on this leg run to the right – the fastest to the left is Thomas Curiger who looses 7 seconds to Hadorn. Left is slightly longer with some more climb. The reason for the big time difference is probably that the road to the left is quite complex with small corners where you need to slow down slightly, whereas you can run faster and more straight to the right.

With this leg Hadorn also goes up into the overall lead again – the first time since ahead of the long leg. 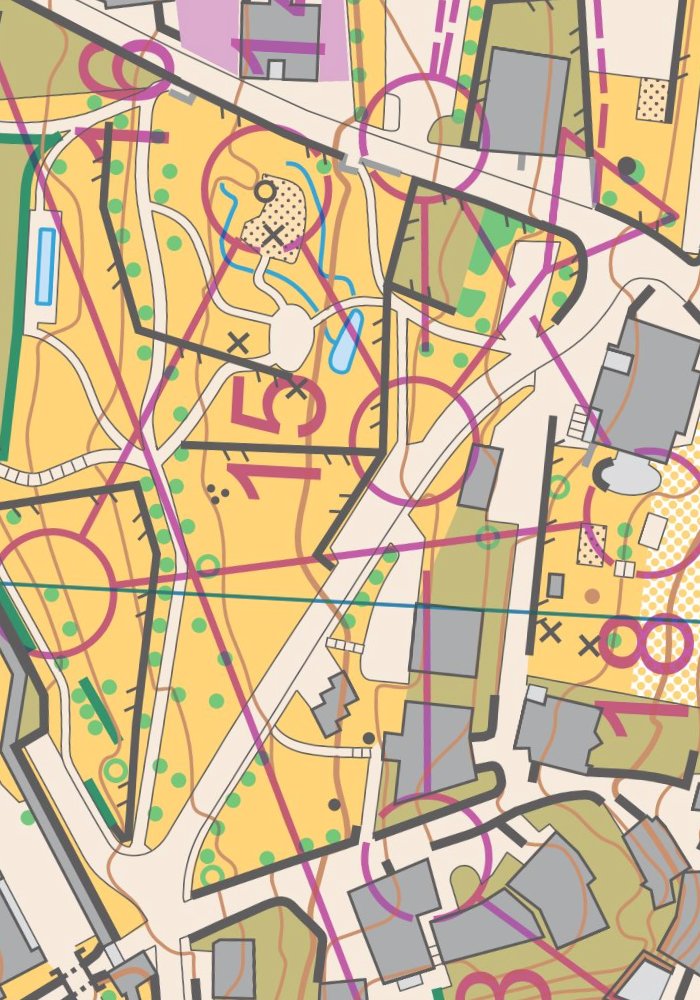 Analysis: Should be a straightforward leg, but Curiger and Pezzati take left around the houses and loose 6 seconds to Hadorn. This is one of Curiger’s worst legs time loss wise.

Analysis: There is an extra split in the split times due to the official split time at the run-through. 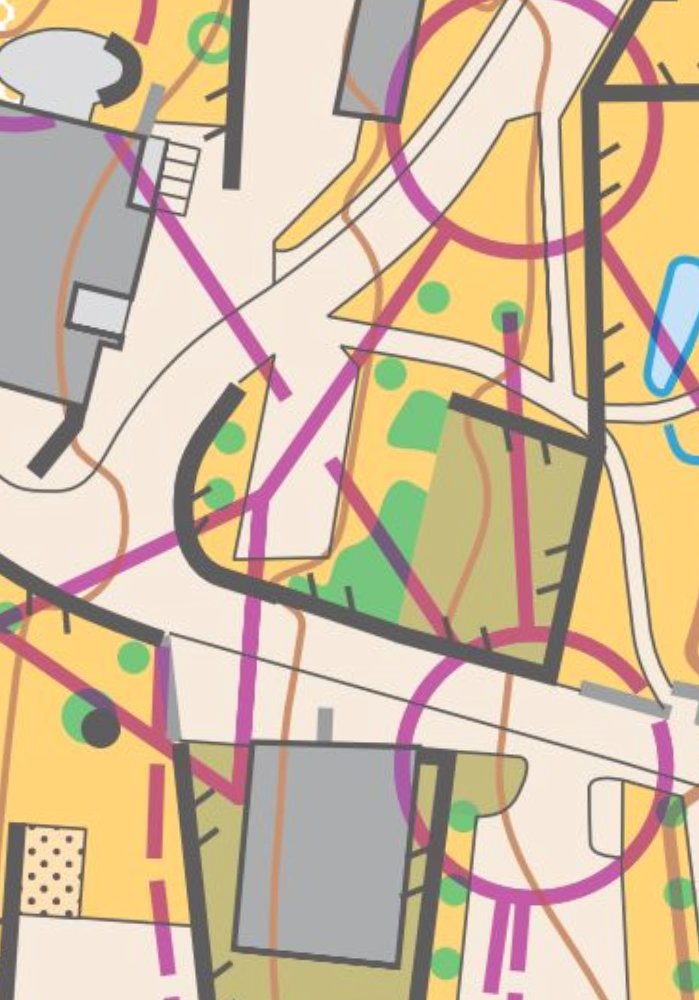 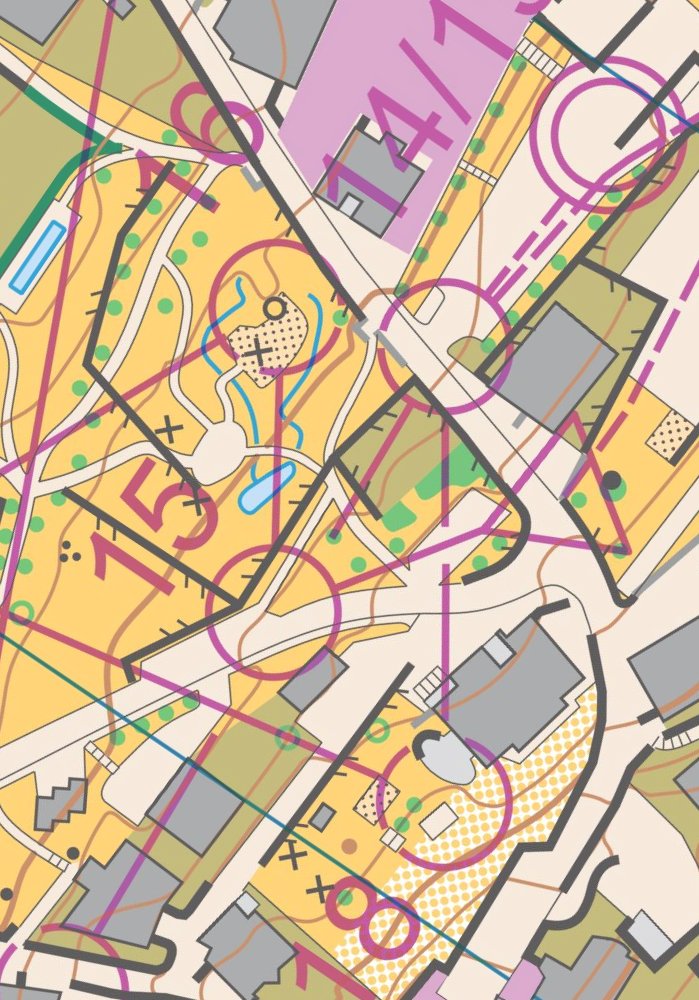 Analysis: Most of the top runners run left which is slower – and in a normal race if coming from a different angle, probably nearly all runners would have taken right. The reason for many going left is that right takes you back were you came from – and in addition you need to pass the spectator control again. Of the top runners only Curiger runs right. The others top finishers loose 3-4 seconds to the best split time. 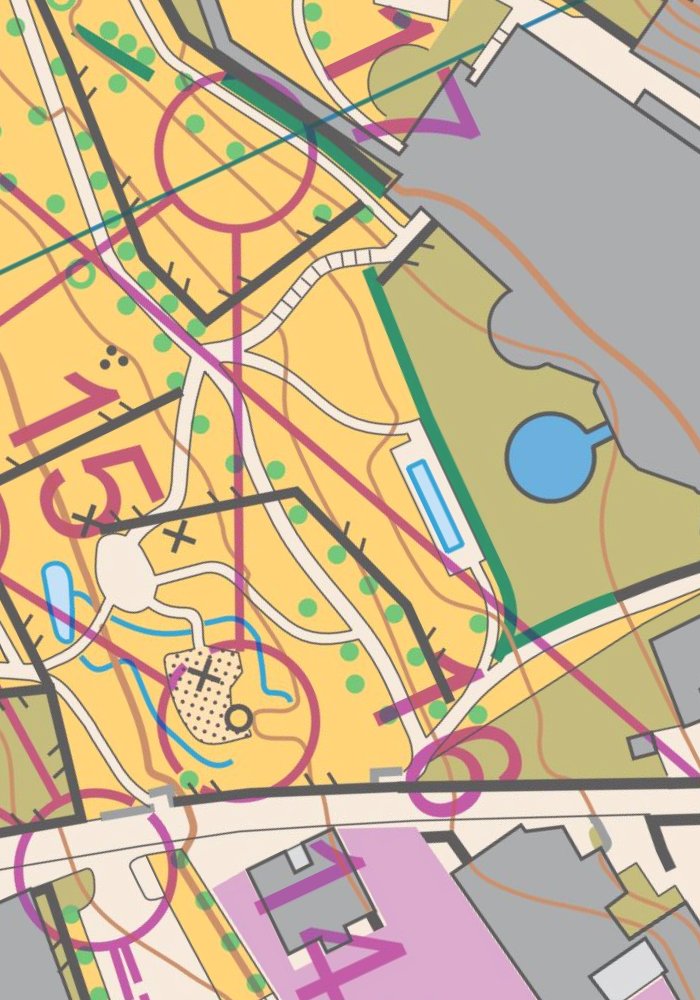 Analysis: Should be an easy leg, but the artificial fences confuse some of the runners. Dubach looses 20(!) seconds by going all the way to the left. Hadorn looses 5 seconds by going right. Straight is fastest. 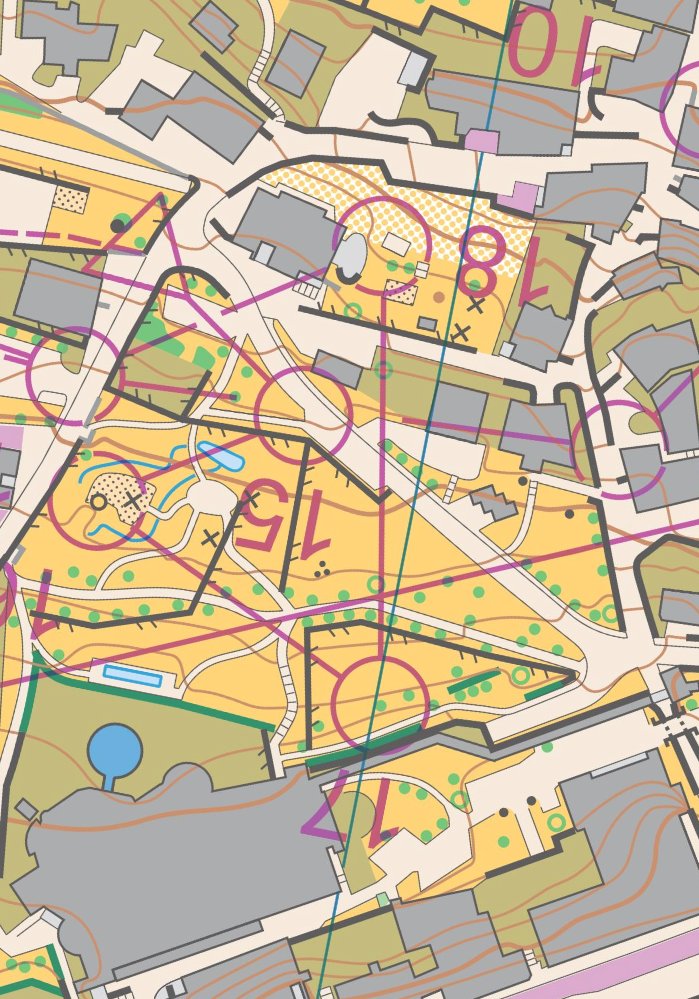 Analysis: Again some fun in the artificial fences. Only few see that left is significantly shorter. The others loose 4-5 second by taking the two variants to the right. 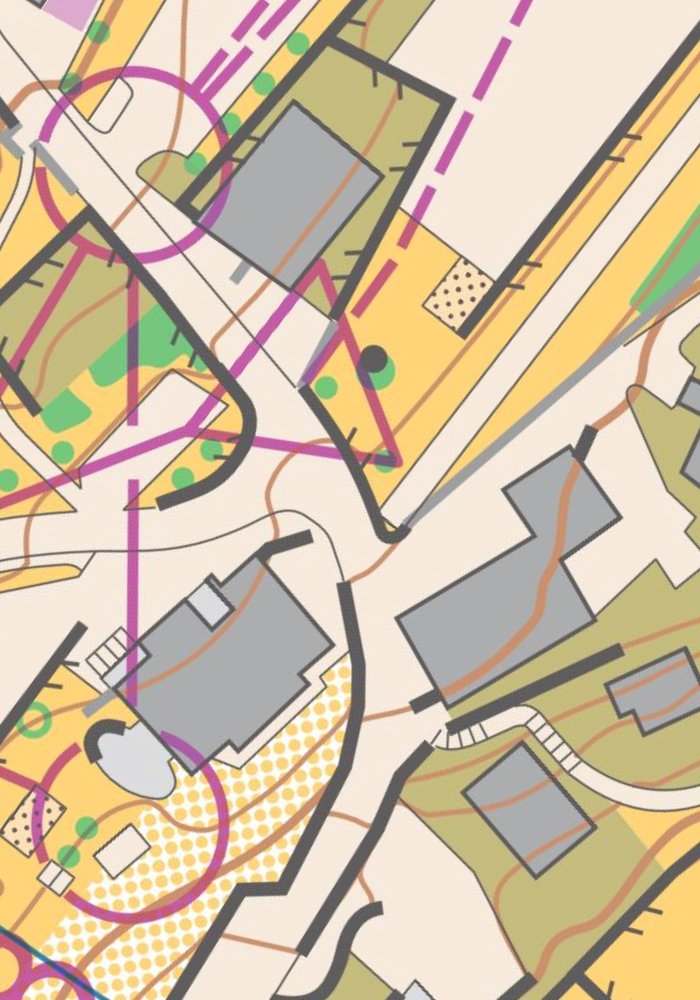