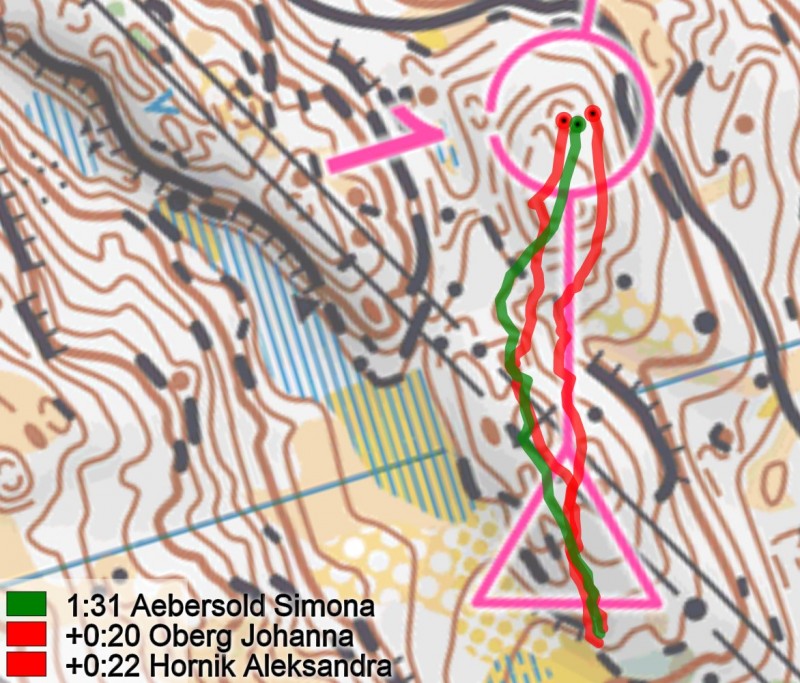 Simona Aebersold was the fastest runner of the day – and that with an excellent technical race. With a lead from the first control until the end, Aebersold won 1:50 ahead of Aleksandra Hornik (Poland) with Johanna Öberg (Sweden) in 3rd at 2:11.

Aebersold did a stable race and lost 16 seconds or less to the leg winner on all legs – least of all runners in the race. Already at the first control did the Swiss runner have more than 20 seconds gap on the two other medalists (see illustration above). Aebersold however won only 4 of 18 legs – thus even if the Swiss runners’ average speed was significantly higher than all the other runners, she ran a balanced race and won due to a good combination of speed and orienteering capabilities – not mainly due to high running speed which nobody could keep up with.

Aebersold caught a glimpse of bronze medalist Öberg who started 2 minutes ahead already at the 3rd control where she passed less than 20 seconds behind. Two controls later, at control 5, Aebersold passed Öberg and was between 2 and 13 seconds ahead of Öberg in the forest at all control passings until the finish. Aebersold later also “picked up” Ingeborg Eide at control 9, who then ran together with Aebersold and Öberg until the finish.

The below graphical illustration of the race shows how Aebersold got a lead already to the first control and kept it all the way to the finish. The battle for silver was also decided early in the race. Hornik was in silver position already at control 2, and kept it from there to the finish. Öberg on the other hand did big mistakes at the three first legs, and did not get up the speed until the third control. Öberg’s third place was very clear – the battle for fourth place was however very tight, featuring many more than the ones shown in this illustration. 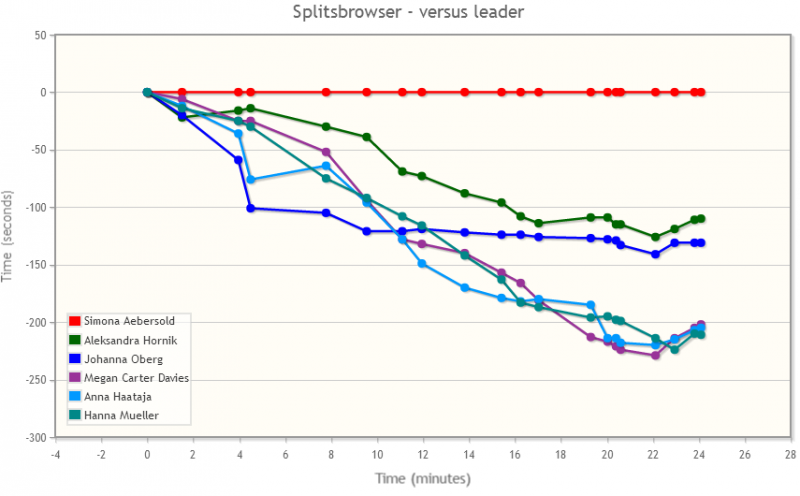 As for the men’s course, the course consists of three distinct parts; part one until control 8 is the tricky part with high intensity orienteering where you have to be really careful with your orienteering and find good micro routechoices. The women’s course is probably even more tricky than the men’s course in this part – especially the second control is tricky – and many also had trouble with the 5th control.Going as straight as possible was best for most legs in this area – despite the complexity of the terrain. 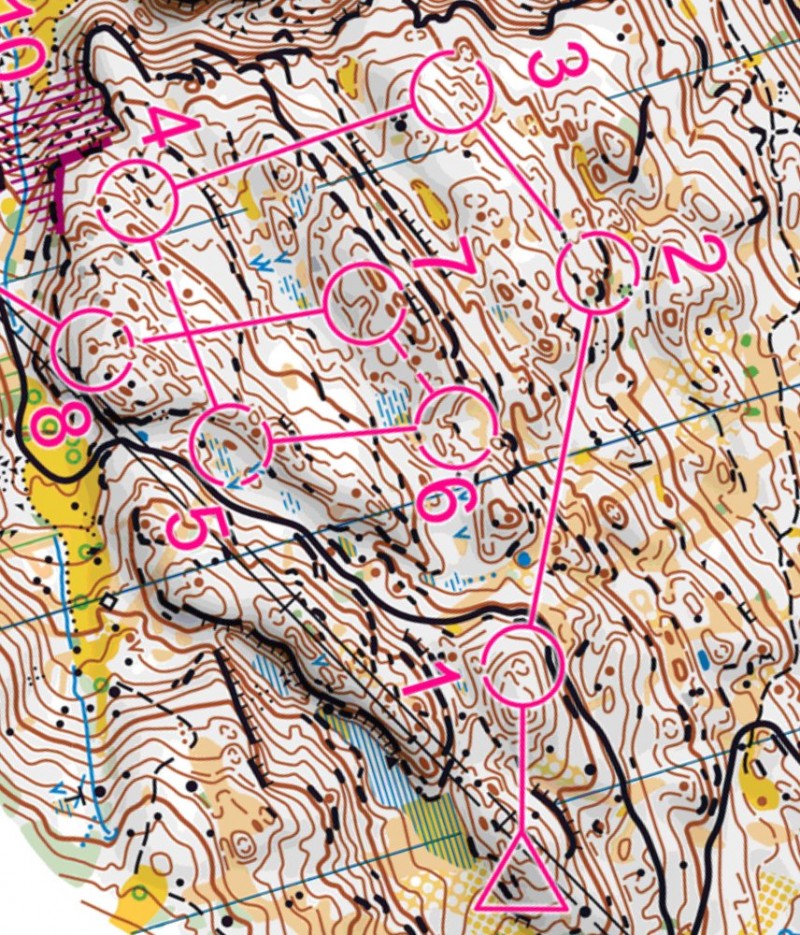 The second part from control 8 down to the arena passage (after control 13) features easier orienteering (although with some difficult parts) in a steep slope. One interesting route choice leg from 11 to 12 – and the 10th control is more tricky than it looks like. 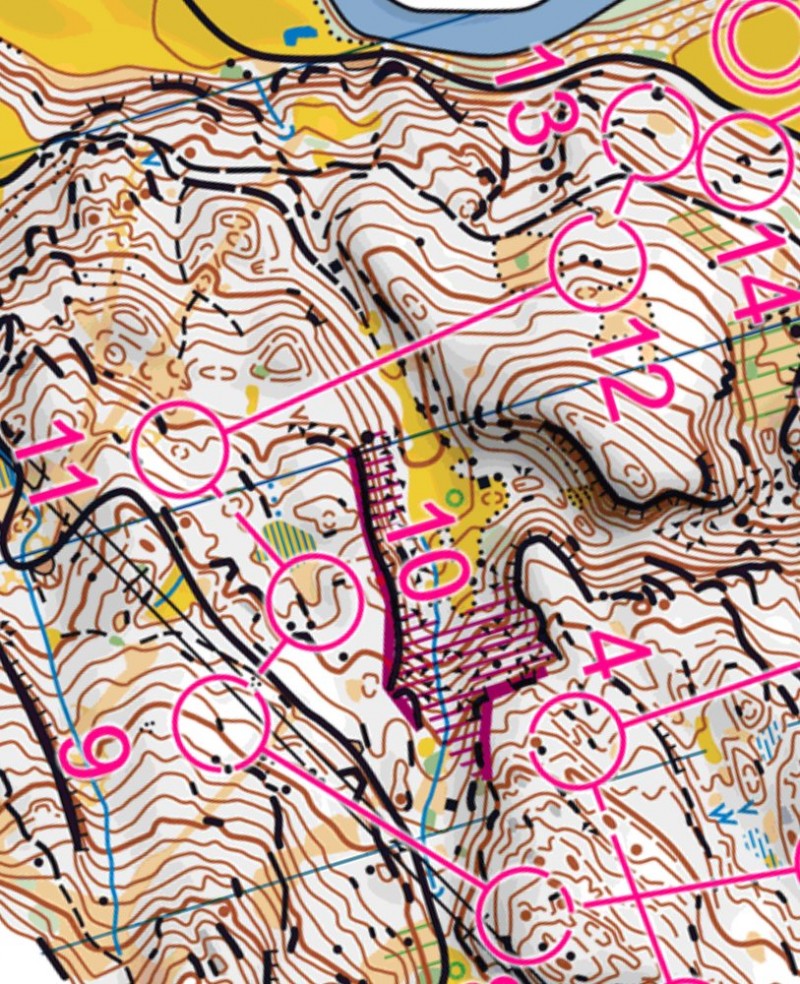 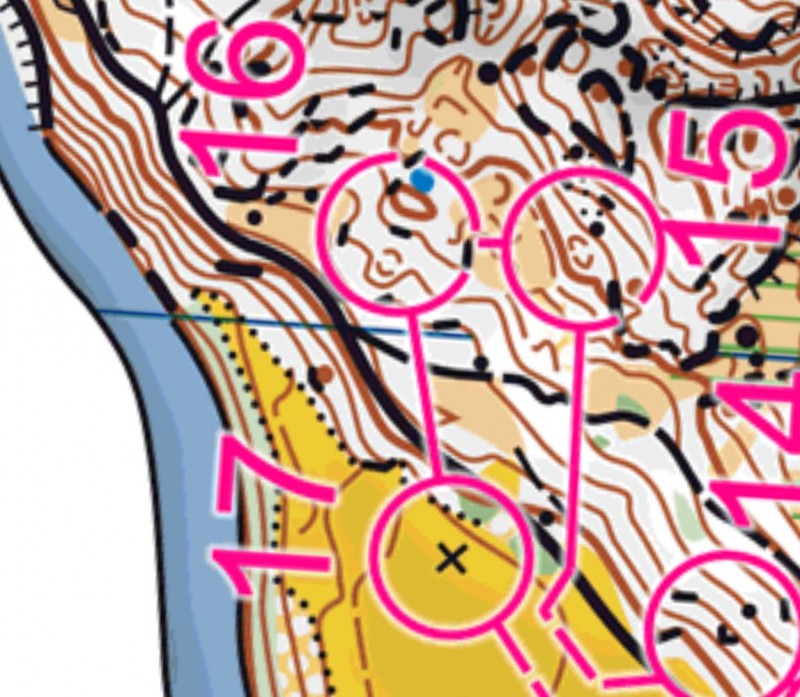 This analysis will not go through all legs in detail, but instead concentrate on interesting points during the race – either for the decision of the race or from an orienteering technical point of view.

Start to control 1: Hornik already behind 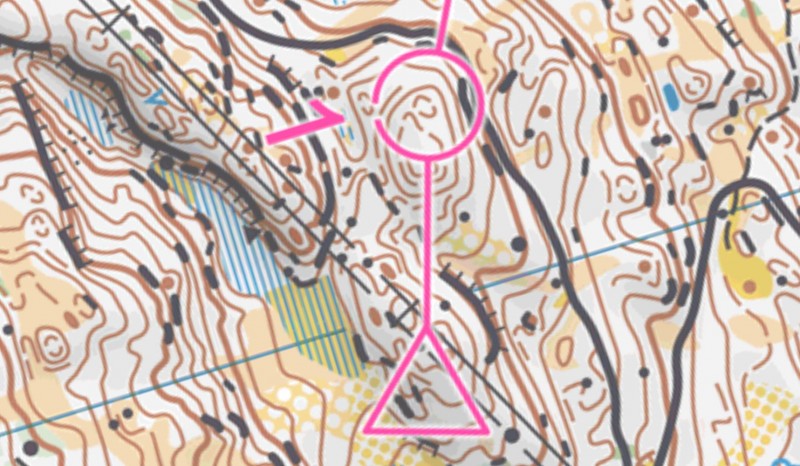 The first control was just an easy control to get onto the map, but still Hornik lost 22(!) seconds to Aebersold already here. That is actually one fifth of the total time gap of 1:50 in the end – on one of the easiest controls. From the GPS comparison, it looks like Hornik was careful from the start and maybe a bit insecure towards the control. 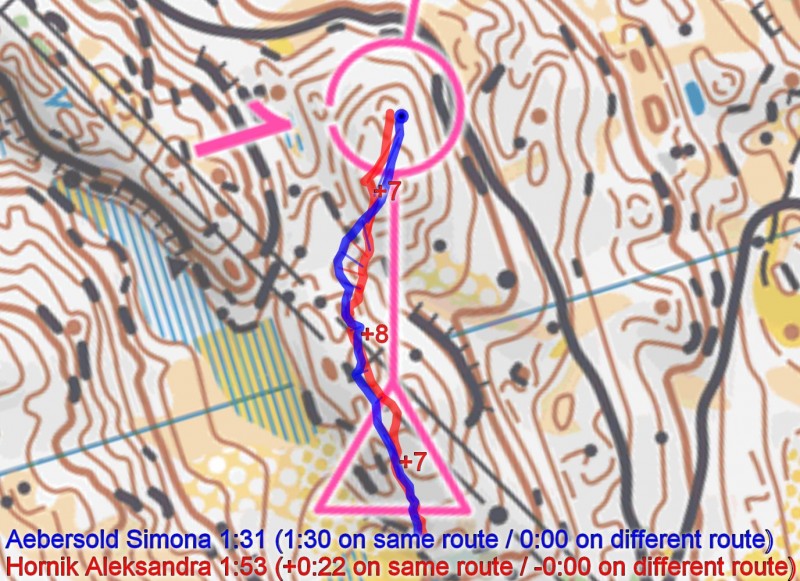 Leg 2: Most tricky of the day 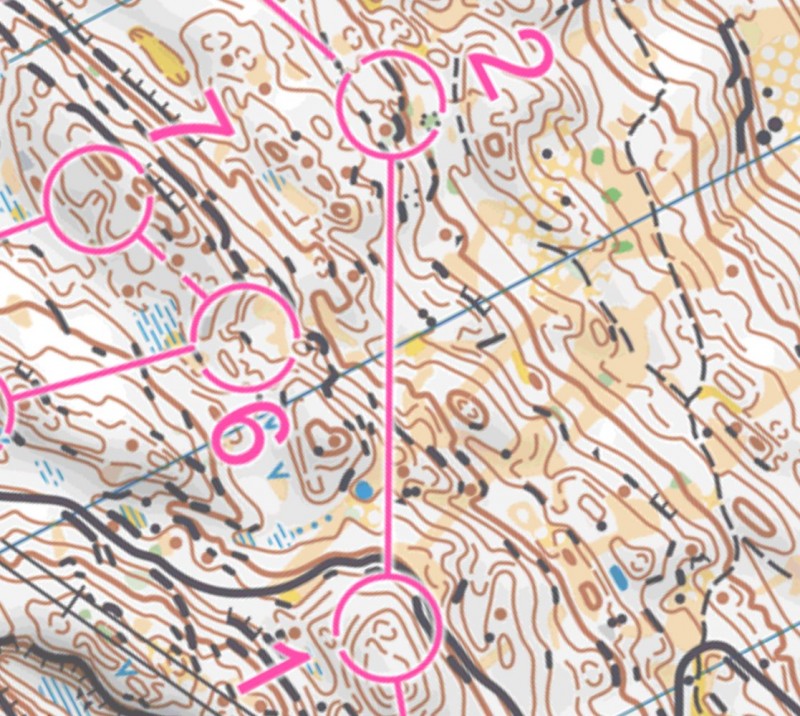 The leg to control 2 was the most tricky leg of the day – also when including the men’s course. While the men had a quite easy second control further down in the slope, the women’s second control was set in a tricky, detailed area with several small cliffs. Hornik ran a fantastic straight route to this leg, winning the leg with 6 seconds ahead of Aebersold.

Half of the runners finishing in Top10 lost 30 seconds or more here, mostly due to choosing non-straight routechoices. Bronze medalist Öberg loses 45 seconds, searching for the control on the righthand side. 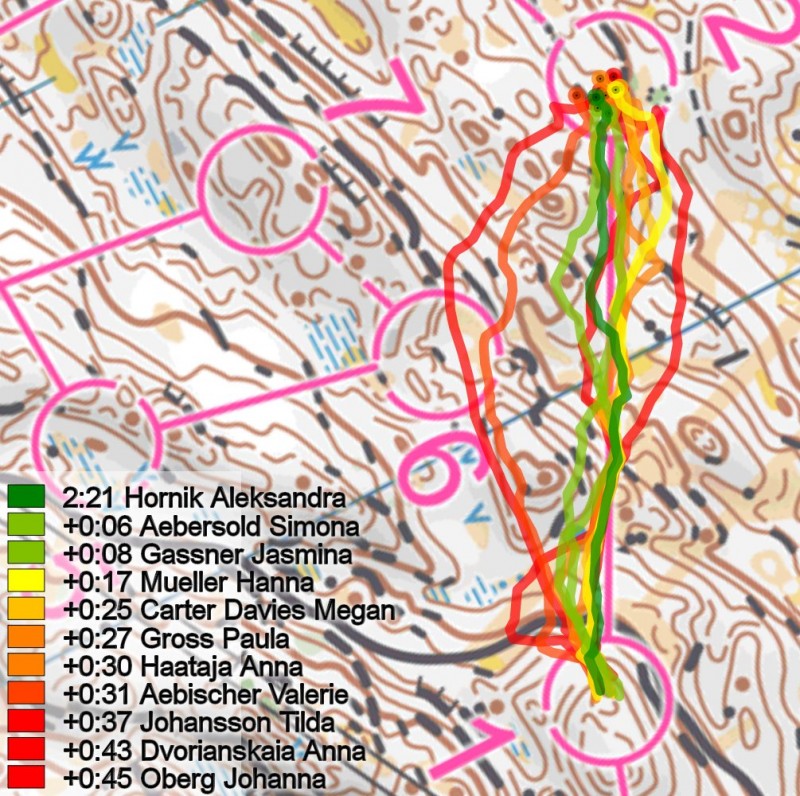 Looking at all of the start field, there were lots of mistakes done here – some of them gigantic. Several of the outsiders, for example Ingeborg Eide (Norway) lost so much time here that they were out of the medal fight already at the second control. Here is an illustration of some of the biggest mistakes: 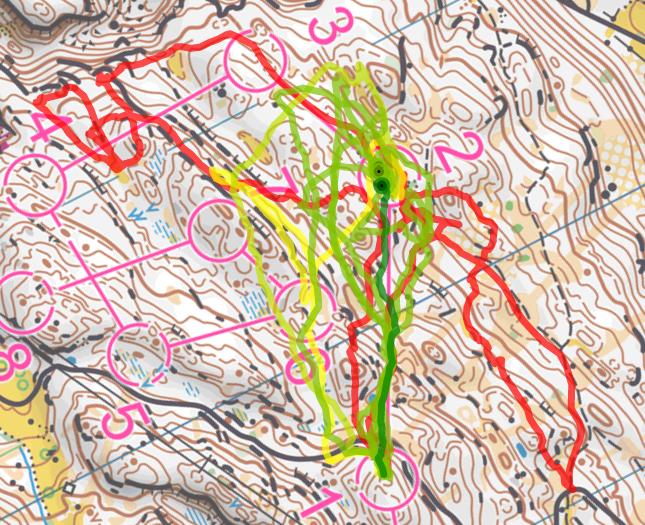 And the spread in routes: 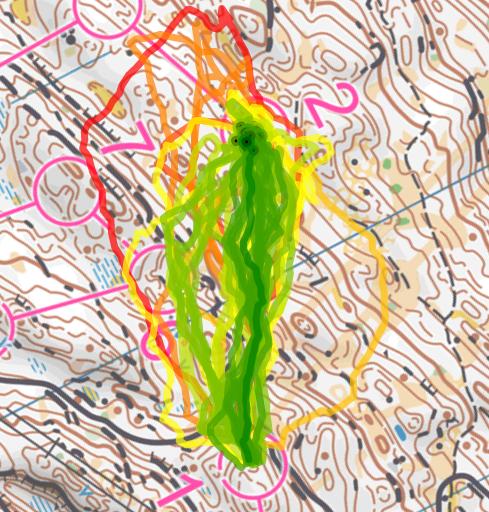 Already at control 2 we have 6 of the runners finishing in Top10 in the current Top10 – and the two first Aebersold and Hornik are there two stay for the rest of the race. Note young Austrian Gassner in third place here – she later does mistakes and goes out of the Top10.

Unfortunately there seems to have been a problem with the synchronization for one of the SI-units for control 3, so there are no official split times to be trusted for the next two legs. However, there is a video preview available for the leg so you can take a look at how it looks in the forest.

Control 5: A tricky one! 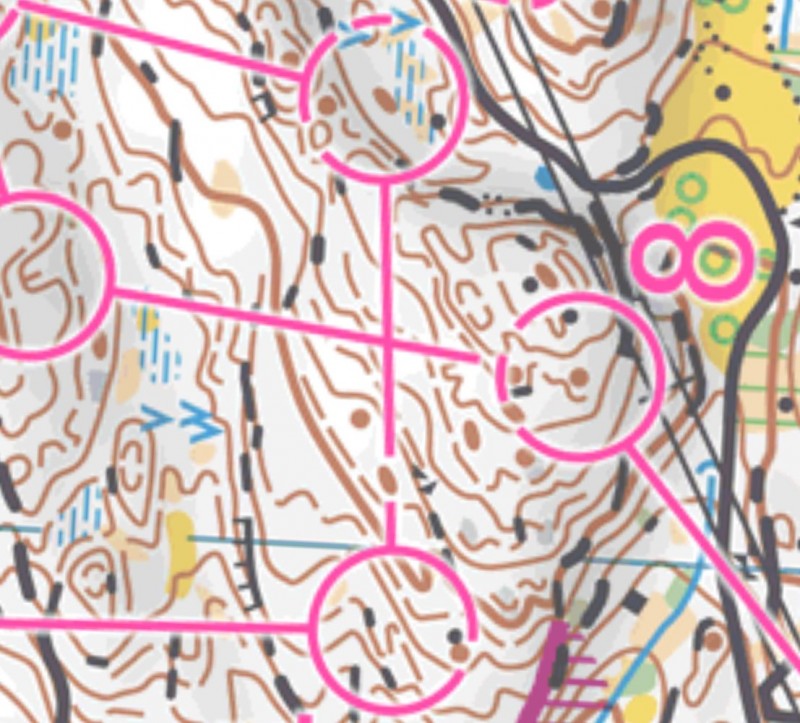 Control 5 was the second most tricky control in all of the competition. It looks quite easy on the map, but it must have been very well hidden as many of the runners had big trouble here.

Of the runners finishing Top10, half of the runners lost 30 seconds or more. Notable silver medalist Aebischer from the long distance loses 46 seconds here. Carter Megan Davies who finished 4th loses 42 seconds. Note also that Austrian Gassner with the excellent start lost nearly a minute at this control, taking her down into 9th position. 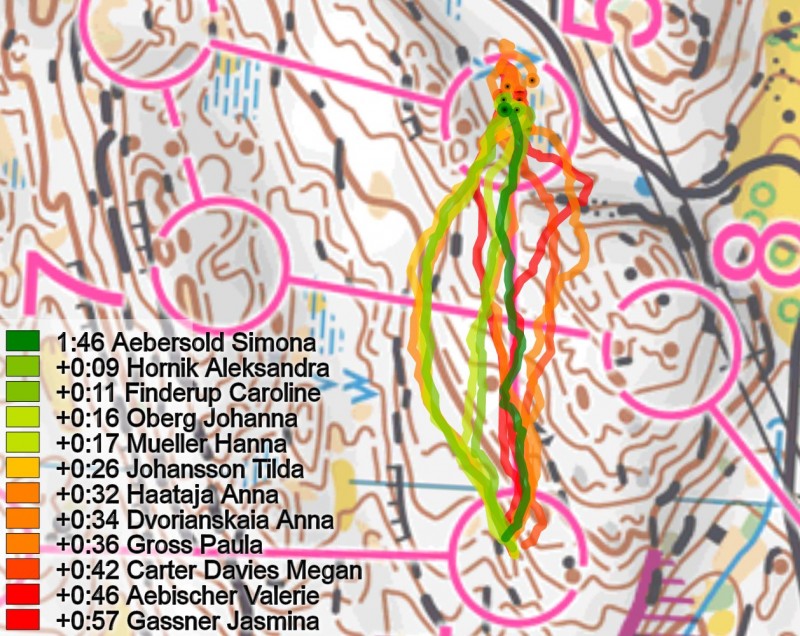 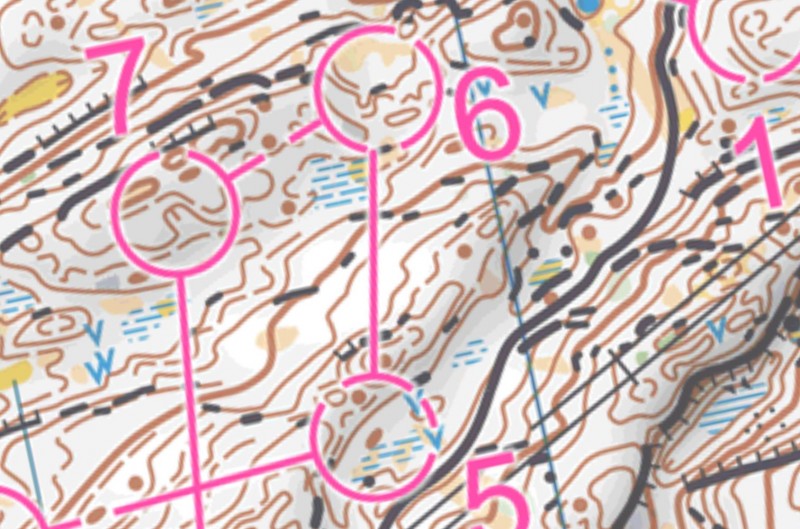 Hornik did an excellent technical race with the only mistake except for the 20 second time loss at the first control (which does not look like a mistake but rather insecurity) being a 40 second mistake at the 6th control. Haataja and Carter Davies make mistakes in the same order here. 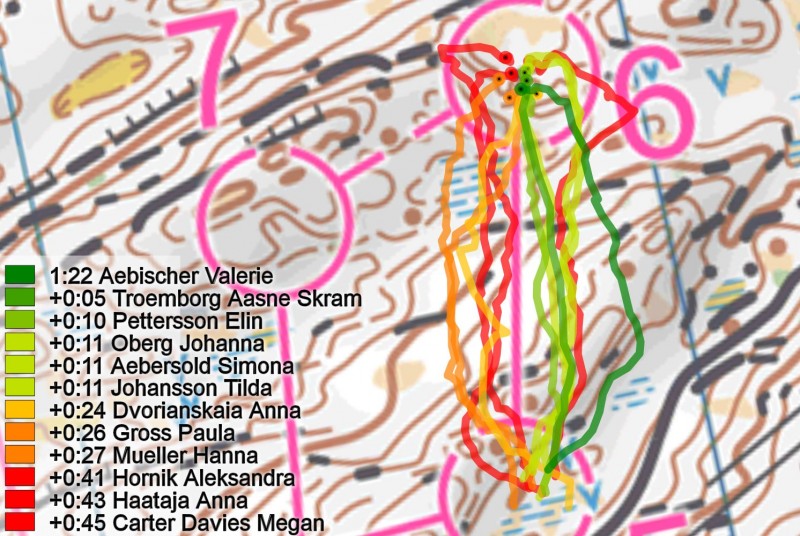 Looking at the standings at the 6th control, Aebischer is in 3rd position with Müller in 4th and Stickova in 5th. Bronze medalist Öberg is all the way down in 7th, more than half a minute behind Aebischer, but at this point in the course Öberg is running together with Aebersold.

To control 7 and 8 Aebischer runs two bad legs, losing 41 seconds for two legs in a row. 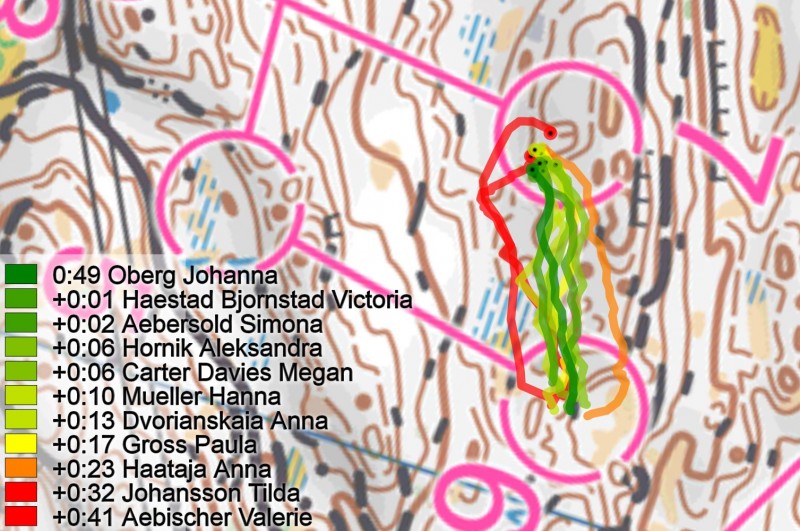 Here is also a video of the leg to the 7th control: 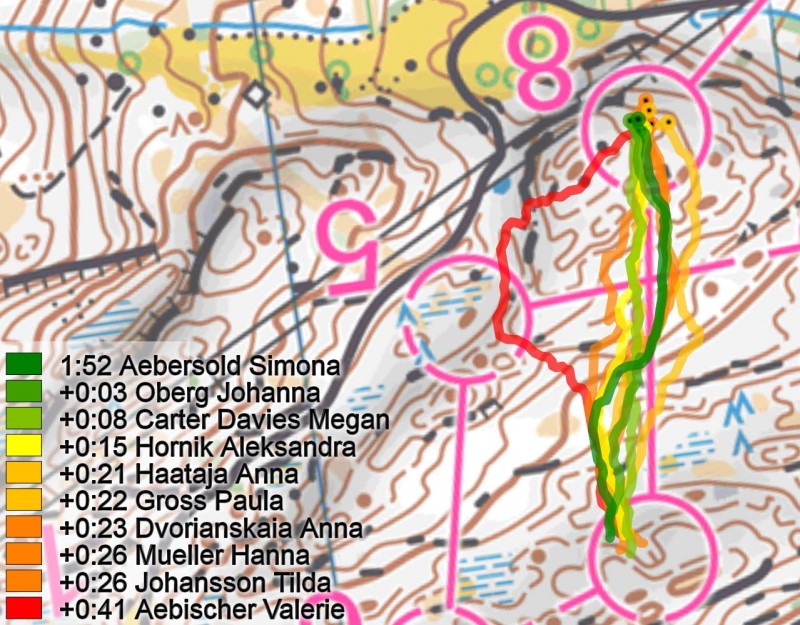 This is enough to take Aebischer out of the medal position. At the 8th control the Swiss runner is all the way down in 7th, nearly 3 minutes behind. Now the medals are decided, and the only change in the podium is that the gold medalist from the long distance, Finnish Haataja, has a good finish and goes from 8th to 5th position. 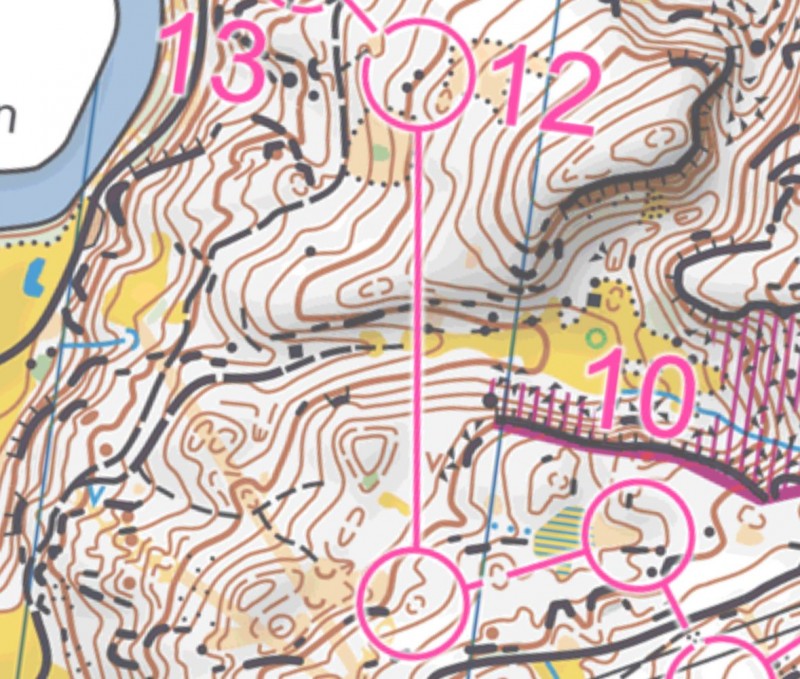 The last leg in the course which could have been decisive – but ultimately wasn’t – is the route choice leg to control 12. During the live GPS coverage Aebersold stopped and turned around when approaching the deep valley in the middle of the leg, and for a moment one got a “deja vu” after the long distance where Aebersold forgot a control and lost 9(!) minutes. However, this time it was only turning around due to a steep hillside ahead, and the timeloss was less than 10 seconds.

Instead the runner losing most time here is Carter Davies (4th in the finish) who loses 37 seconds here. She was however 1:11 behind Öberg’s bronze medal in the finish. 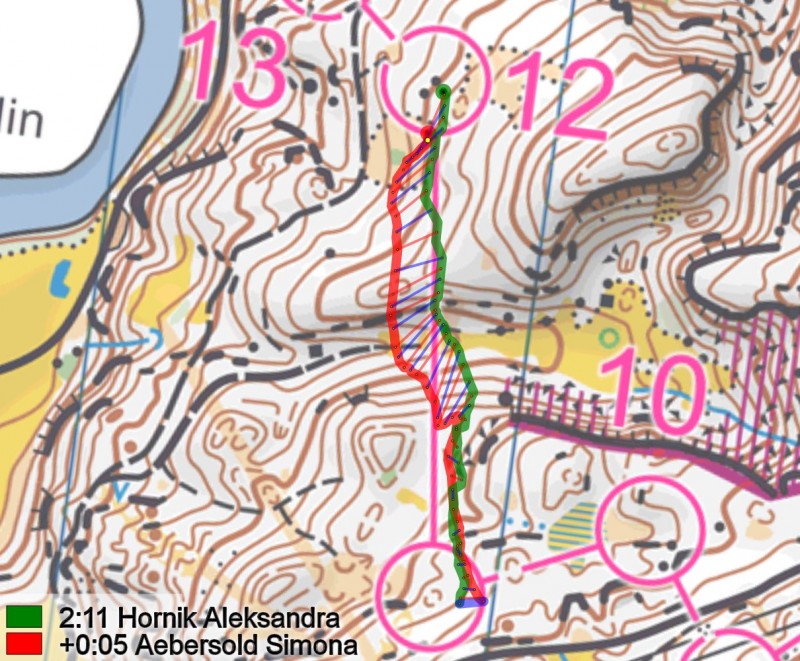 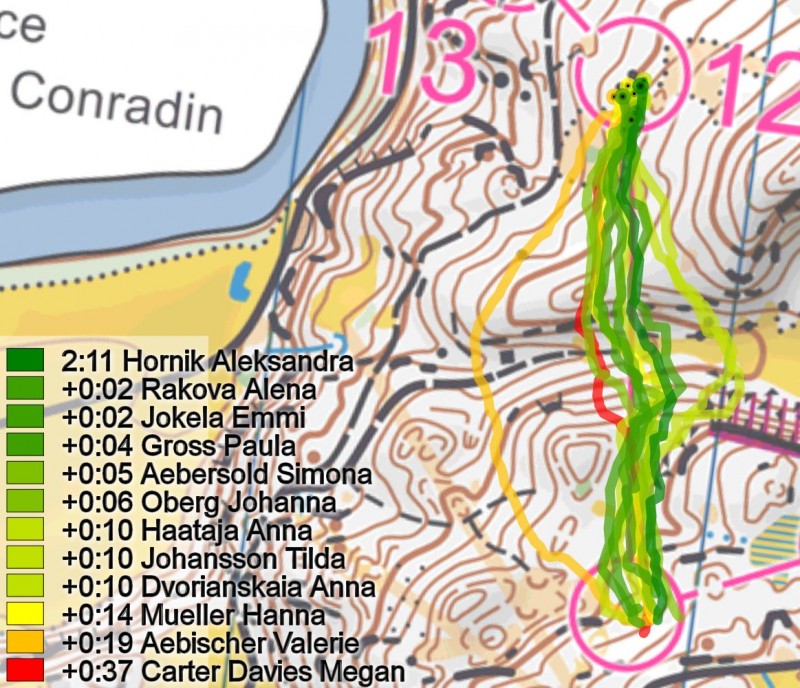 Taking a look at a comparison between Aebersold and Hornik, you can see that the only place Hornik was faster than Aebersold was her fantastic straight route to the 2nd leg (see below) and the routechoice to control 12 where Aebersold turned around at the cliff and lost 10-12 seconds. 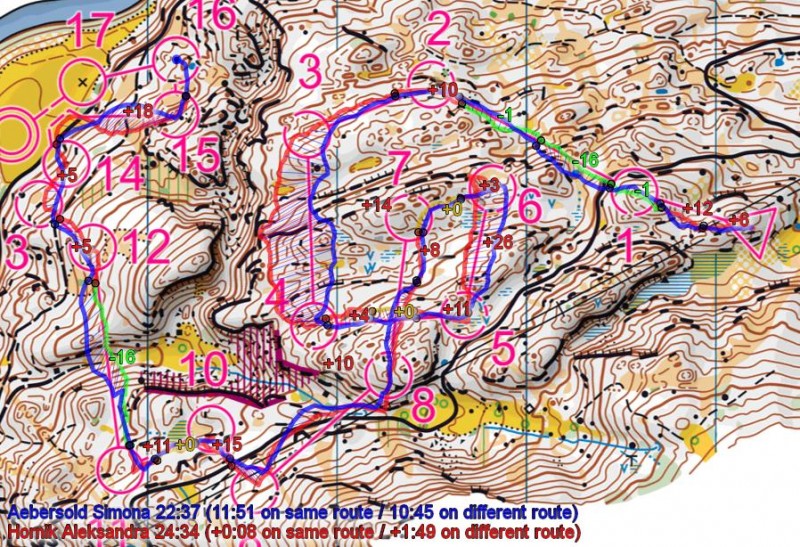 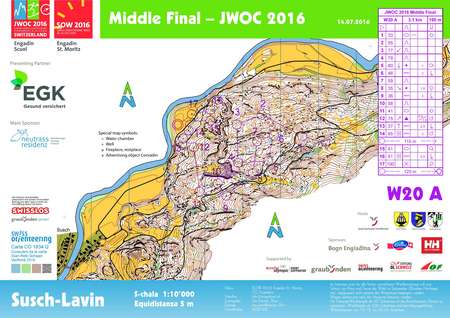 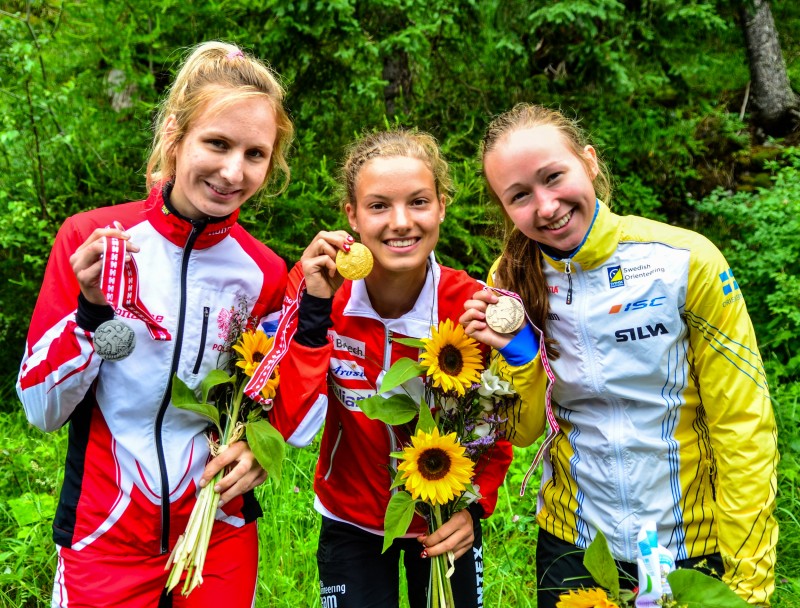 Jan Kocbach is the founder of WorldofO.com - taking care of everything from site development to writing articles, photography and analysis.
@jankoc
Previous JWOC 2016 Middle: Maps and Results
Next JWOC 2016 Middle Men: GPS and Splits Analysis