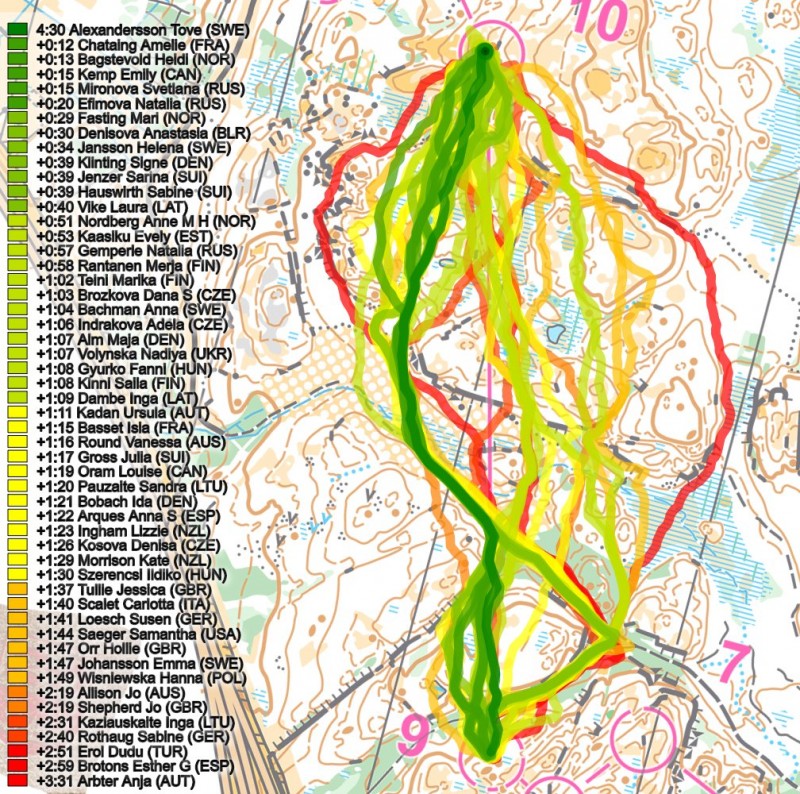 Tove Alexandersson was the big favourite for the WOC middle distance in Tanum, but the Swedish runner got a surprisingly tough fight from Canadian Emily Kemp. After a miss by Kemp towards the end of the course,  Heidi Bagstevold (Norway, silver) and Natalia Gemperle (Russia, bronze) passed Kemp on the results.

This article looks into who had the speed and the technical skills to win the race and the medals – and why the medals were won by Alexandersson, Bagstevold and Gemperle and not some of the challengers. None of the top runners had a clean race. Tove Alexandersson lost 36 seconds or less to the leg winner on all legs – that was least of all runners in this race. Still Alexandersson had several smaller mistakes.

Race development at a glance

The below splits graph shows the race development between the top runners at a glance. The fight for victory is between Kemp and Alexandersson, the lead changing between them until Alexandersson decides around 5 minutes before the finish when Kemp does a miss towards control 19.  There were three crucial legs in the course – leg 4 (routechoice leg where many runners lose time, including the silver and bronze medalists),  leg 10 (another routechoice leg where many runners lose time, including bronze winner Gemperle and Sweden’s Emma Johansson who was in third position ahead of this leg) and leg 19 (the leg where Kemp loses significant time; also a routchoice leg). This analysis focuses on these three legs, but also includes other legs where top runners lose significant time or which are important for the race development. 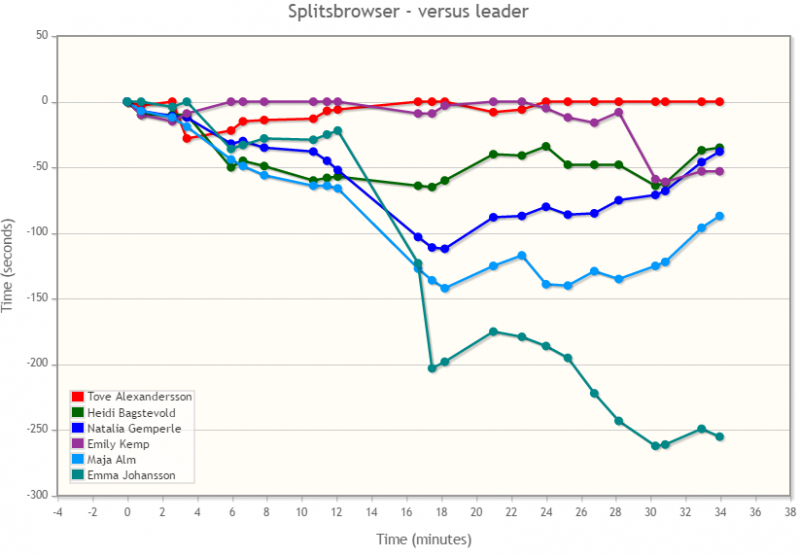 Leg 3: Could have been crucial – Alexandersson loses 30 seconds 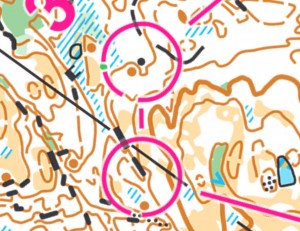 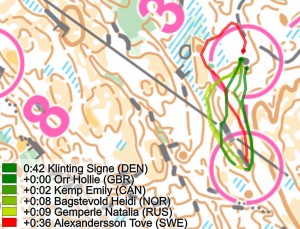 Although already the first two controls were diffuse and challenging (

), the first control which was important for the race development among the top runners is the 3rd control. Here Tove Alexandersson loses 36 seconds due to what looks like a directional mistake on the run-in to the control. This could have been crucial for Alexandersson, but in the end her gap was large enough to still win safely. After the race Alexandersson told that this mistake was very tough mentally because she also did not feel so well physically from the start. 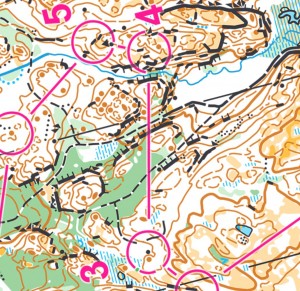 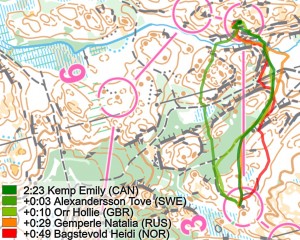 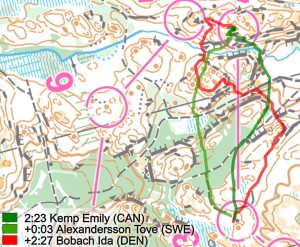 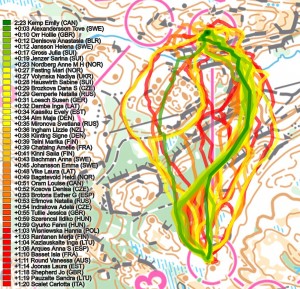 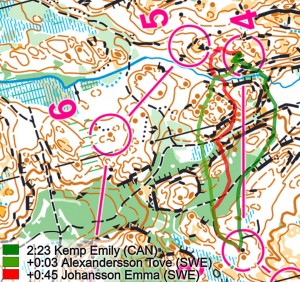 One of the most interesting legs in the course is the leg to control 4. This leg is partly about routechoice, but execution is as often is the case more important than routechoice here. Emily Kemp solves this leg best of all, winning the leg 3 seconds ahead for Tove Alexandersson with Hollie Orr as the third best 10 seconds behind.

Kemp solves the leg by running in an S, mostly on paths in the first part of the leg and with a tough climb into the control, and executing the leg very well. Bagstevold and Gemperle also run to the right, but execute poorly and lose 49 and 29 seconds, respectively. Emma Johansson is in the lead at control 3, but loses 45 seconds at the leg to control 4 due to executing poorly. Alexandersson runs to the left, and loses only 3 seconds to Kemp. Alexandersson is probably saved from additional time loss by her high speed though. 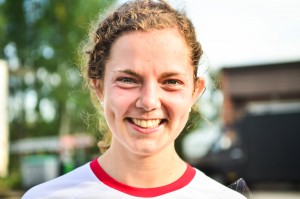 Standing at the 4th control:

Kemp has a 20(!) second lead already at the 4th control. Note that Bagstevold is down in 15th place at +50 seconds and Ida Bobach all the way down in 48th place at +2:50. Bobach has now already lost the race, and it looks like her speed is now slower. Note also that Helena Jansson is in 2nd spot here; Jansson got an injury early in the course and did not manage to make a good race.

Leg 10: The routechoice leg of the course

) featured some technical challenges were top runners lost 10-15 seconds and a routechoice leg to control 7 which was not very decisive. Alexandersson slowly gets closer to Kemp in this period of the race. Leg number 10 was, however, both interesting and decisive. 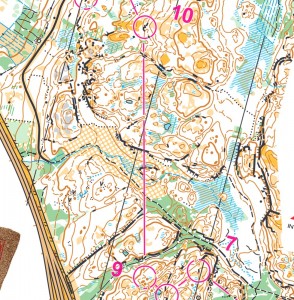 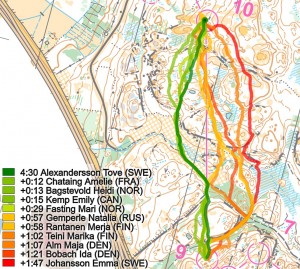 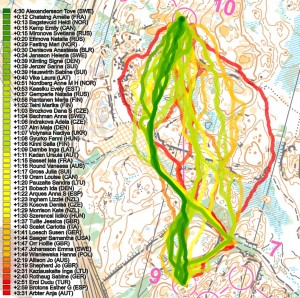 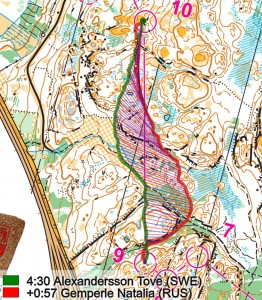 Clearly the best routechoice is to run to the left, using the path as much as you can, and thus also reducing the climb as much as you can. The reason for so many runners taking the option to the right may be that the first hill on the route to the left might seem a little tough after all the experience the runners had with steep hills and cliffs on the training maps – this hill does however only have 10 meter climb and is climbed easily. The climbs at the middle of the leg on the rightmost variant are worse. The below animation shows how you can keep the speed high most of the way on the route to the left:

#WOC2016 Middle #gpsanimation: Women's long leg – interesting that so many choose to run to the right here…? #orienteering

Leg 13: Alexandersson loses another half minute on a route choice 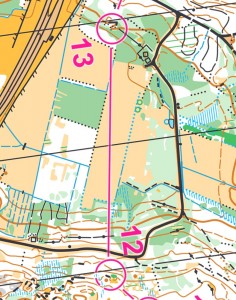 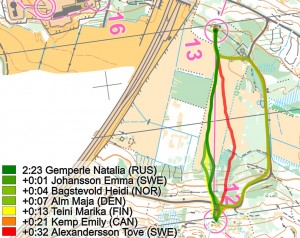 On the way to the 13th control is Alexanderssons second 30+ second time loss. Alexandersson gets stuck in the green on the way down to the field, losing 32 seconds to Natalia Gemperle who is fastest on this leg. Emily Kemp runs the slower routechoice to the right (on the road) and loses 21 seconds to Gemperle – thus Kemp does not manage to build a bigger gap.

Looking at the overall list at control 13, Kemp is still (or rather again; Alexandersson has been in the lead in-between) in the lead, now with 8 seconds. Note that Natalia Gemperle is 1:28 behind Kemp.

) – the next real challenge is leg 19.  At control 18 Tove Alexandersson has taken over the lead, but Kemp is only 8 small seconds behind.

The leg to control 19 is however crucial for Kemp’s chances for Gold. Kemp probably got some extra pressure on her shoulders after the arena passage where she could hear that she had a clear lead of over 2 minutes, because on the leg to control 19 she did 3(!) different mistakes. First a direction mistake out of the control, then she took the wrong route choice (around to the left on the path), and finally she did a mistake on the way into the control. This cost Kemp more than a minute to Maja Alm who is fastest on the leg and 51 seconds to Alexandersson.

Note that Bagstevold does not find the path into the forest halfway on the leg, and also loses 26 seconds here. 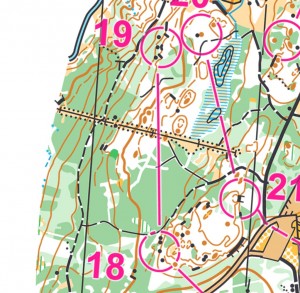 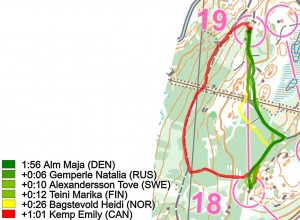 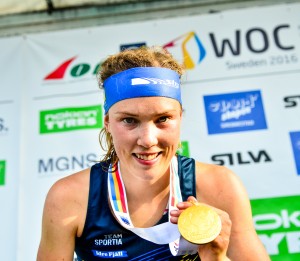 Kemp retains the 2nd place also at the 19th control, but now nearly a minute behind Alexandersson – with Alexandersson in relatively safe Gold position. Bagstevold in third is now only 5 seconds behind Kemp with Gemperle another 7 seconds further down. 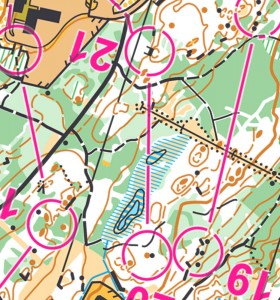 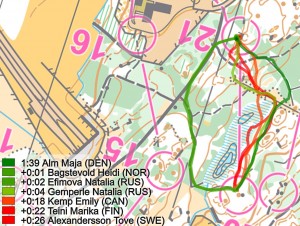 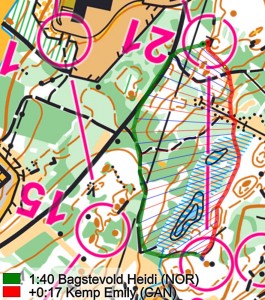 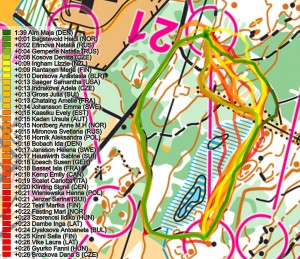 Leg 21 is the last leg with orienteering on the course – and this is also where Kemp goes from silver to 4th place. While Bagstevold runs the safe route to the left on path and road, Kemp runs to the right and loses time (17 seconds in total) in the areas with bad runnability. Gemperle also runs right, but finds better runnability and beats Kemp with 14 seconds. 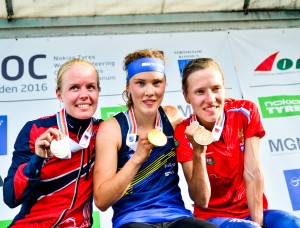 This gives the following final standing. See below for a GPS-animation of the fight between the Top 4.