The WOC 2016 Long distance course was characterized by several challenging long legs where both routechoice and execution was important in order to perform well. Olav Lundanes solved the long legs best – giving him his third World Championships title on the long distance. 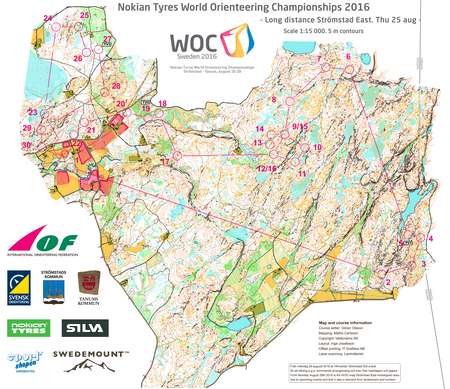 Leg 2: A tough choice after one minute running 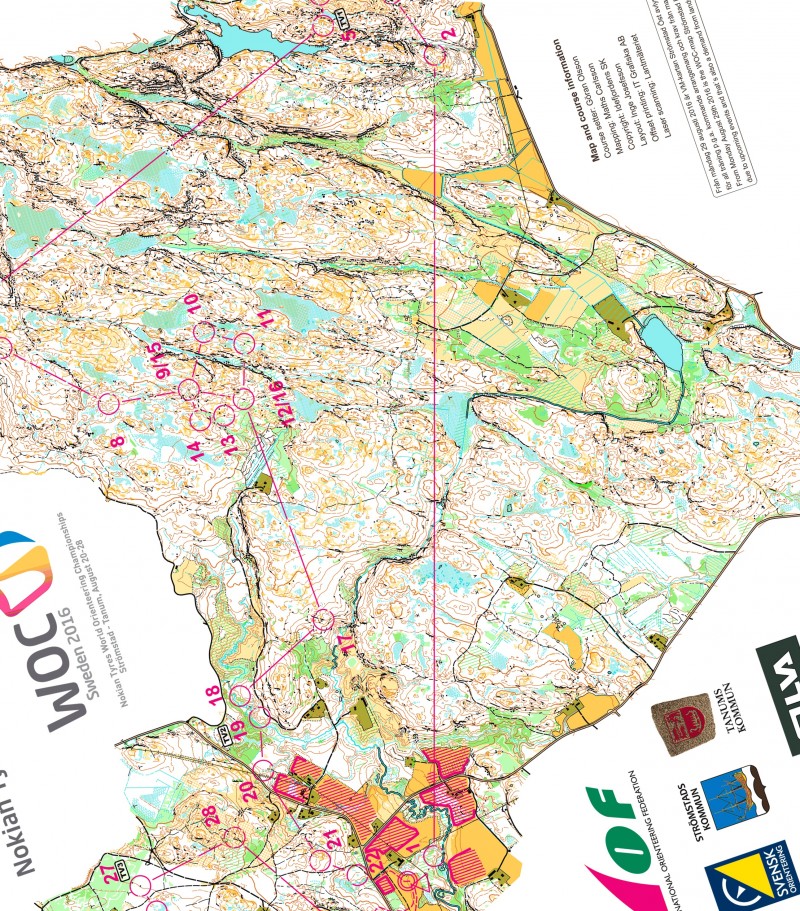 The runners met the longest leg in the course already to the 2nd control (see above) after 1 minute of running  – a 3500 meter long leg where you could choose to either take a long route around on road (5.4 km long), to exploit the paths to the left of the line, or to dive into the tough terrain on a number of straight options.

The three best times on the leg were ran by Timo Sild (left), Olav Lundanes (straight, +0:02) and Thierry Gueorgiou (straight; +0:21, other micro routechoice than Lundanes). Valentin Novikov run the best time on the road around to the right, losing 1:27: 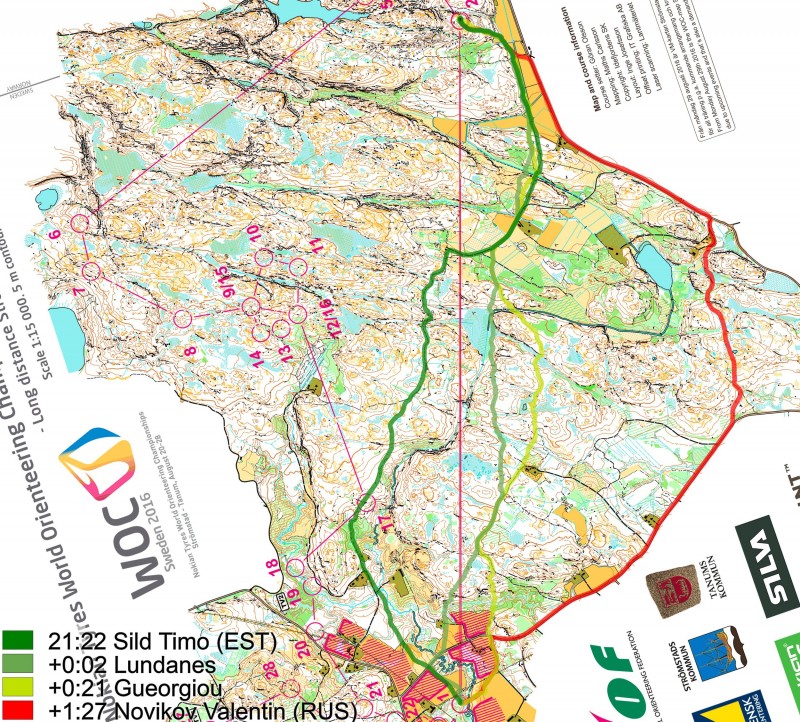 Question 1: Is it a good option to run around to the right?
In the women’s class Natalia Gemperle ran the fastest time by running around to the right on the road, one minute faster than anybody else. None of the favourite runners in the men’s class choose to run around; the best placed runner who took the road around is Valentin Novikov who finished 21st (actually only one other runner took this route; Eric Bone, USA). Novikov, however, was not one of the fastest runners of the day, and also chose a non-optimal route between the roads in the middle of the leg (losing 20-30 seconds). Novikov ran around 3:40 min/km on the road (compared to 3:55 min/km for Gemperle). A top runner like Matthias Kyburz could probably run around 3:20 min/km on the 3.5 km road, i.e. around 1:10 faster for the road part of the leg. With better execution between the roads, a time around Lundanes’/Silds time or even better should be possible. Compared to Kyburz’ timeloss of 1:47 to Lundanes with his straight routechoice, a low risk route around to the right would definitely have been a better choice for Kyburz.

Question 2: Is Timo Silds route better than Lundanes’ route?
Timo Silds (only Sild runs this route in the men’s class) found a route which is somewhat longer than Lundanes’ route, but it has significantly more path running. For the part of the route where Lundanes and Sild run differently, Lundanes is 10 seconds slower than Sild. This indicates that Sild’s route may be some seconds faster, but the routes are not very different timewise. Silds route does however look like it should be much easier to execute, and it is somewhat surprising that nobody else ran this route. 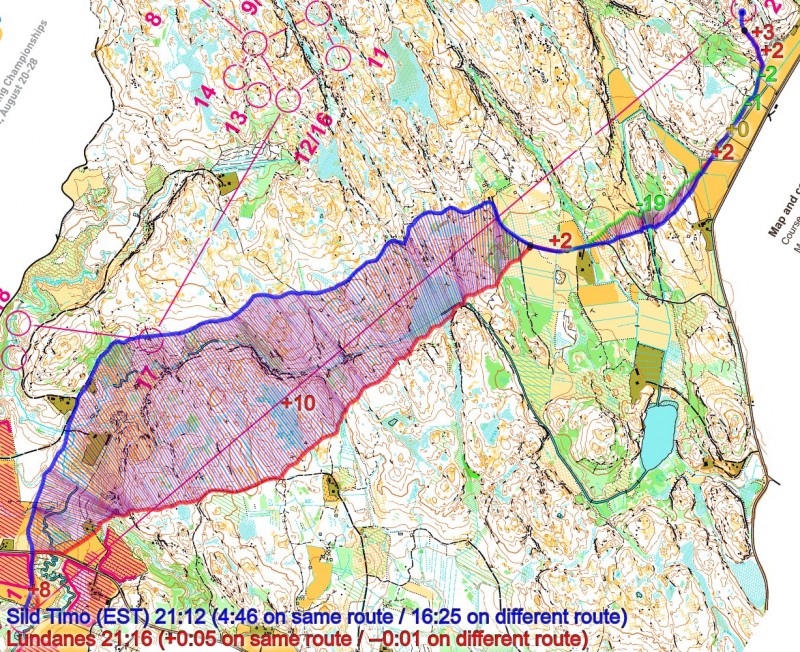 Question 3: Which is the best route?
Many runners lost significant time on this leg, but based on the above discussion, running left, straight or around the road to the right should be approximately equal with good execution. Thus the important question to ask is (1) which route suits you as a runner best and (2) which route is easiest to execute with least risk to lose time on the execution. For (2), definitively going to the right on the road is easiest to execute while straight is probably most difficult to execute.

Analysis: Lundanes vs pre-favourites Gueorgiou, Hubmann, Kyburz, Dæhli
Comparing Lundanes with 2nd placed Gueorgiou you see that the two routes are equivalent except for one place towards the end of the leg where Gueorgiou takes a bad micro routechoice and gets stuck twice. First on an open area and then up a cliff. For the rest of the leg Gueorgious route is actually faster than Lundanes’ – even if Gueorgiou does some 5 meters of swimming over the impassable river on the middle of the leg… 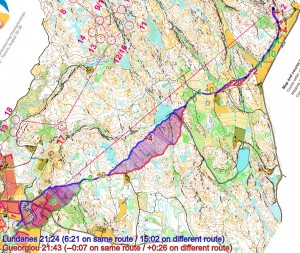 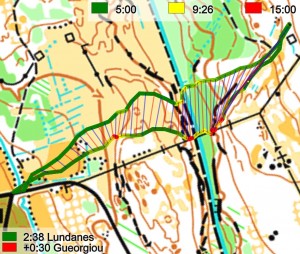 Comparing Lundanes with 3rd placed Hubmann, you see that of the 1:10 Hubmann is behind Lundanes on the leg, he loses 48 seconds on the last part of the leg where he chooses to take the control from above. He also loses some time at the start of the leg in the ravines. For the rest of the leg he has the speed of Lundanes. 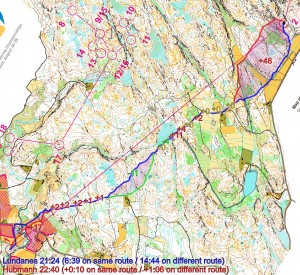 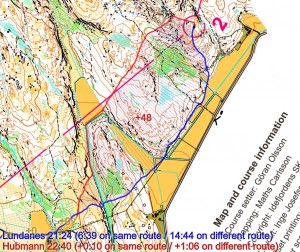 Comparing with 4th placed Lucas Basset, you see that Basset lost a lot of time – more than 3 minutes – and that the time losses were spread out along all of the leg. 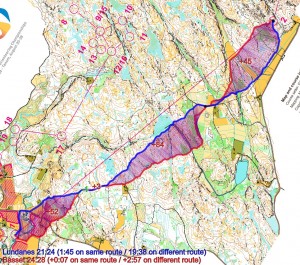 Comparing Lundanes with 5th placed Carl Godager Kaas, Godager Kaas has the same speed as Lundanes, but loses nearly 1:30 on the middle part of the  leg where he does some bad micro routechoices; mostly the time loss is due to going through the marsh and due to running longer than Lundanes. 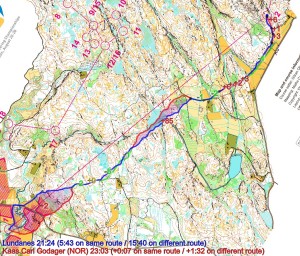 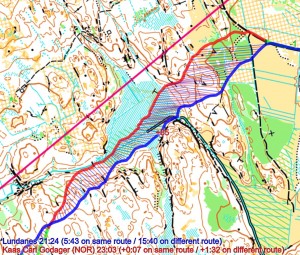 The 2nd leg summarized
To summarize, Lundanes ran the second best time on the leg because he found the best micro routechoices all the way. Most other top runners lost time because they got stuck several times on the leg. Very few runners ran the left and right alternatives which are probably easier to execute; most runners could have performed better on this leg by chosing another route. The reason for so many running straight is that the terrain might have been tougher than expected with more heather (according to interviews with the runners in the press conference).

Without entering the terrain ahead of the choice about which route to take on the most important leg of the day, one had to choose based on pre-race knowledge rather than based on what one saw in the terrain. The below illustration shows where the different runners ran slower than 9 min/km, i.e. where they got stuck. Note how there are very few places to get stuck on Sild’s route. 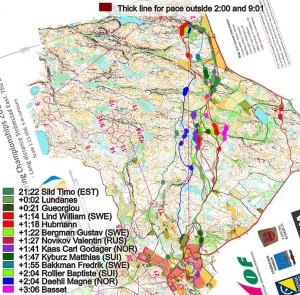 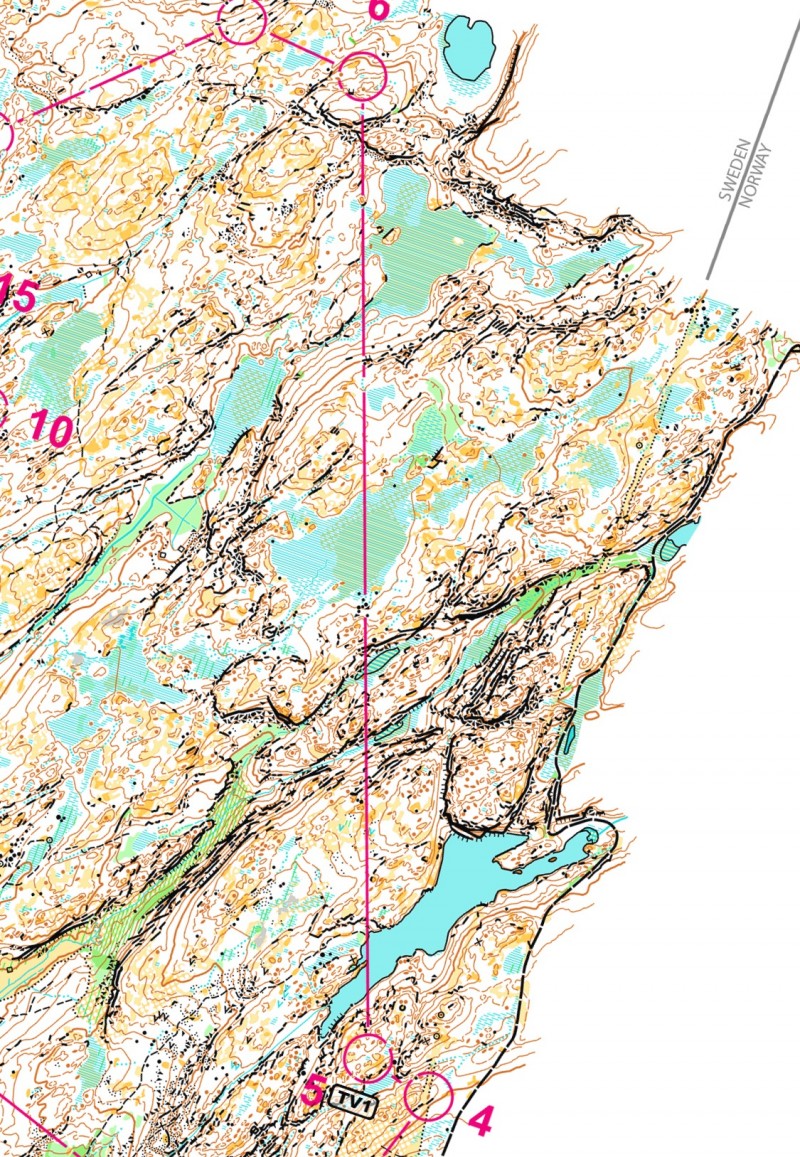 The second interesting leg of the day is the leg to control 6. Again a route choice leg – and again a leg where execution and micro routechoices are just as important or more important than the routechoice itself. There are two main choices here; either taking one of the numerous straight variants where you have to navigate carefully through the cliffs – or run around the path to the right.

This is where Gueorgiou lost 80% of the time to Lundanes in #woc2016 Long – in the rest of the course they were nearly equal! Gueorgiou is the red line to the right of Lundanes #cliffclimbing #toughguys

Looking at the 6 best times on the leg (see below), you see that the best 5 times are run on different straight variants. Lundanes runs an extremely fast leg, 0:25 ahead of Hubmann (who is mostly running behind Lundanes here). Basset, Godager Kaas and Dæhli are nearly a minute behind Lundanes, also on straight variants. The best runner around on the path is Andrey Salin at +1:14. With no top runners taking routes around to the right, it is difficult to draw any clear conclusion on straight vs right, but it is probable that there is relatively small difference in time for a good execution on a routechoice to the right and straight. 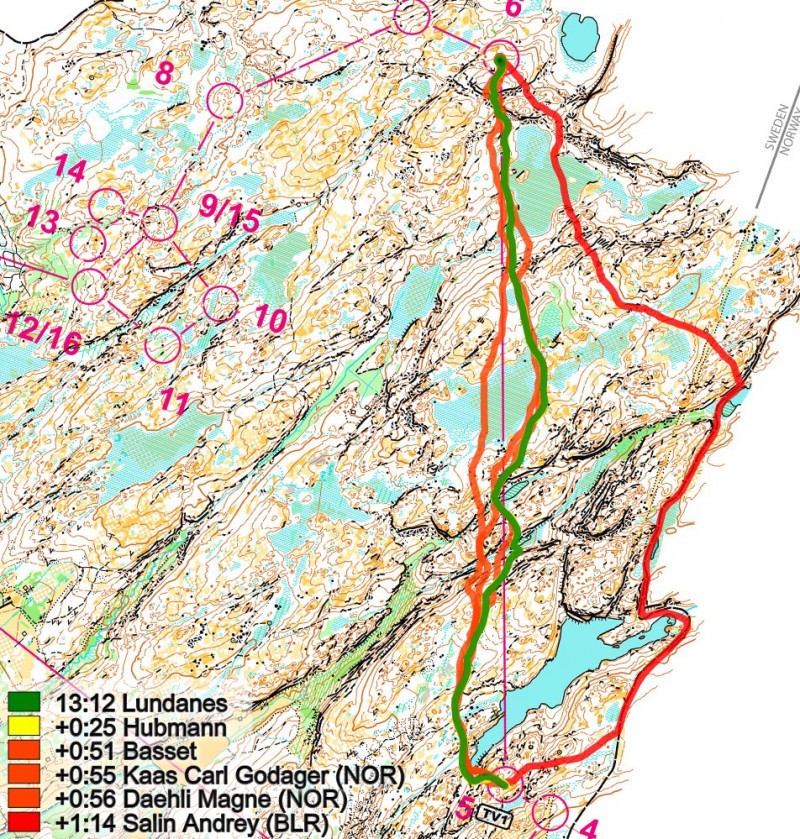 Looking further at the 30 fastest on the leg, similar times are ran on many different variants: 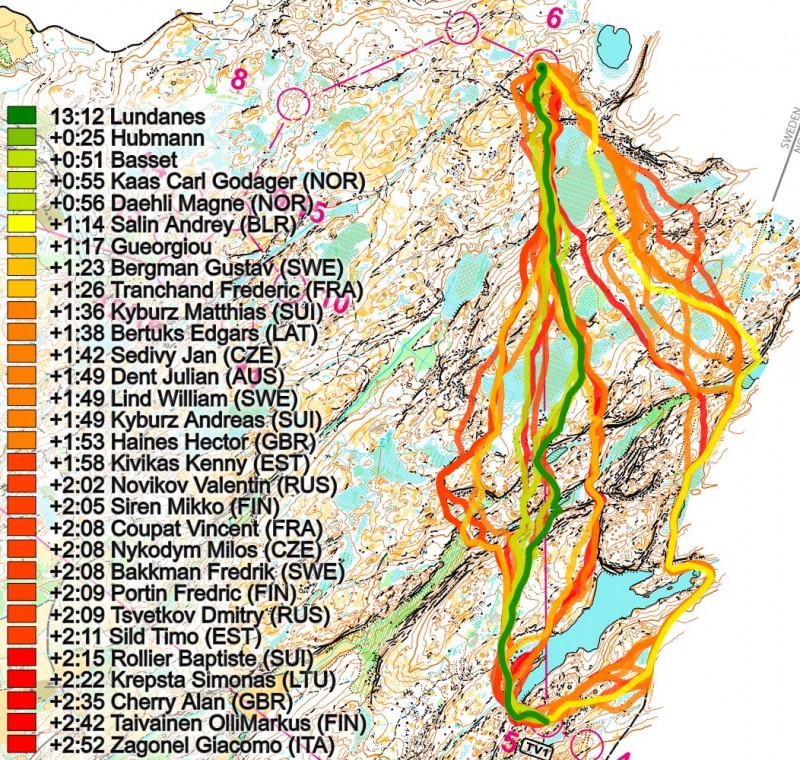 The key to running a good time here is to get well through the cliffs on the middle part of the leg. Here Lundanes finds a very good way where he minimizes both climb and length: 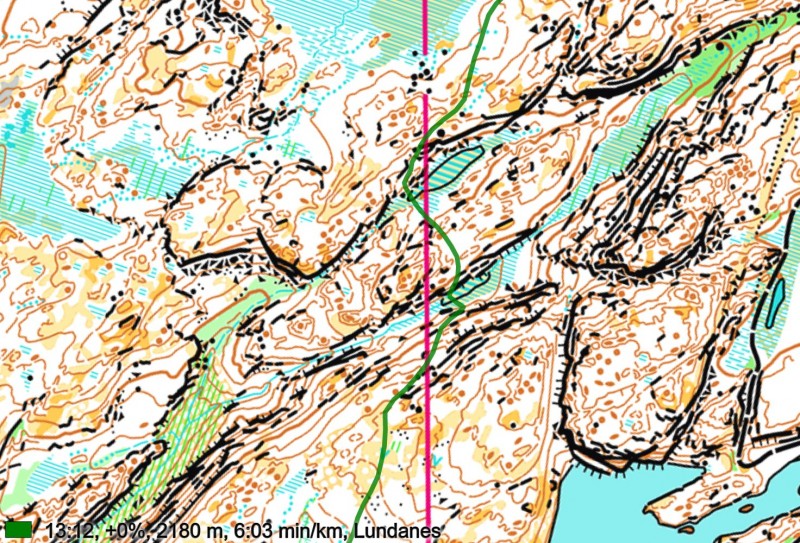 This leg is especially interesting because this is where Gueorgiou lost 80% of the time he lost to Lundanes on the course. Below is a comparison between Lundanes and Gueorgiou on the leg. As you can see, Gueorgiou loses 45 seconds (of 1:17 lost on this leg) through the cliffs in the middle of the leg and the rest up the cliff towards the control. The reason for losing time through the cliffs is that he runs 60 meters longer with 15-20 meter more climb; it is very difficult to count the climb on a 1:15.000 scale map with all the formlines, though. 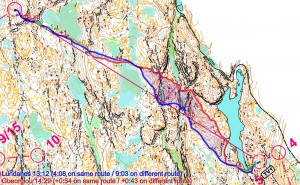 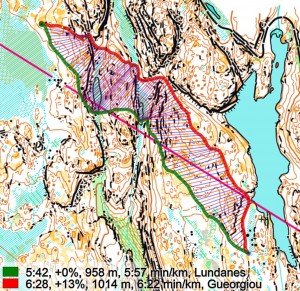 Part 2: The battle for the medals 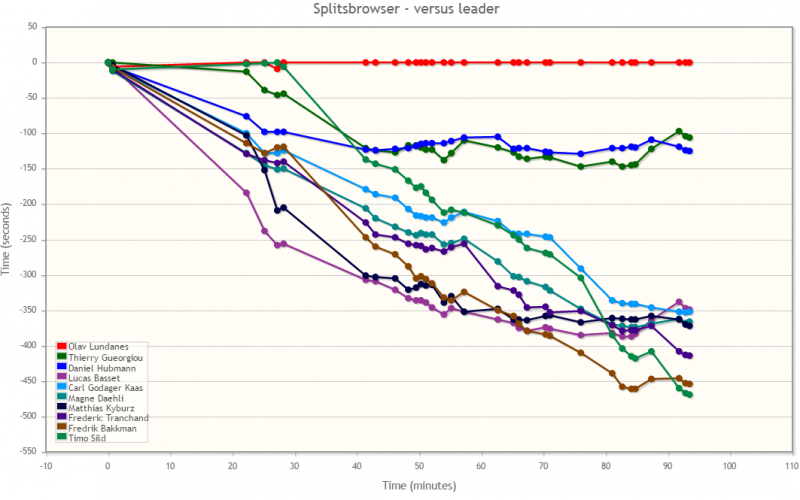 It is clear from the above splitsbrowser graph that the fight for the medals is between the three medalists from last WOCs, Lundanes, Gueorgiou and Hubmann (running together with Lundanes), who were also be biggest favourites. Nobody else was close to fighting for the medals. There is a very tight battle for the places 4 to 6. Lucas Basset decides the battle towards the 29th control were he had better speed than Godager Kaas and Dæhli. Frederic Tranchand, Fredrik Bakkman and Timo Sild were also in the fight for the places 4 to 6, but did not have the speed for a medal.

You can see how nearly all runners lose significant time in the first part of the course (to control 6). The fight for gold was decided mostly on the 6th leg where Gueorgiou loses 1:17 to Lundanes – here Lundanes has a 2 minute advantage on Gueorgiou. Gueorgiou beats Lundanes from the 6th control to the finish, but only with some 20 seconds.

Here is an animation of the medal fight:

What the above graph and animation does not show is that the race was characterized by a several groups of runners moving together through the terrain which surely influenced the final results significantly within the Top 10, and possibly also in the battle for the bronze medal – although this is purely speculation.  It does, however, look like Lundanes and Gueorgiou were mostly in control of their own orienteering, and thus the battle for gold was not influenced significantly by grouping.

The most successful group was the Lundanes group which started building on the way to the 6th control, with Lundanes in the front most of the way. The group consisted of runners finishing 1st (Lundanes), 2nd (Hubmann, from the 6th control), 5th (Godager Kaas, from the 17th control until the 22nd control) and 7th (Matthias Kyburz, from the 18th control). The other group of top runners was the small French group consisting of Gueorgiou and 4th placed Lucas Basset, from the 4th control to the finish with Gueorgiou in the front most of the time. The last Top10 group was the Bakkman-Sild group – where Sild caught up Bakkman with 2 minutes already at the 2nd control after his extraordinary good 2nd leg – running with Bakkman all the way to control 23. Mikko Siren and Milos Nykodym were also in this group for significant parts of the course.

Grouping stats per control Top 10 #WOC2016 Long. Too much red&blue! All supposed to be green #2minutestartinterval pic.twitter.com/12WGAdQC8x

A closer look at the medal fight

Lundanes won the race on the first part of the course where he pushed hard and could use his excellent orienteering in this type of terrain. As analyzed above, Lundanes beat Gueorgiou on both the long legs – gaining 19 seconds on the leg to control 2 and 1:17 on the leg to control 6. In addition Lundanes ran a very strong short leg to the third control where everybody lost 15-20 seconds or more – Gueorgiou lost 27 seconds to control 3 (

Here is the standing at the 6th control:

From the 6th control to the finish, Gueorgiou is 20 seconds faster than Lundanes. This splitsbrowser shows a comparison between the two runners (note that the illustration is not correct in the phi-loop, but the error is not significant).

Here it is clear that the 3rd leg and the 6th leg are the big differentiators between Lundanes and Gueorgiou. Gueorgiou has a very strong finish which helps him to win silver against Daniel Hubmann. Here is a corresponding comparison with Gueorgiou and Hubmann (who runs with Lundanes).

Hubmann loses around a minute on the long leg to the second control, and catches this minute again on the long leg to control 6 together with Lundanes. From there on to the finish there are very small differences except for Gueorgiou’s strong finish to the 28th and 29th control – the biggest time difference being for the 29th control where Hubmann loses more than half a minute: 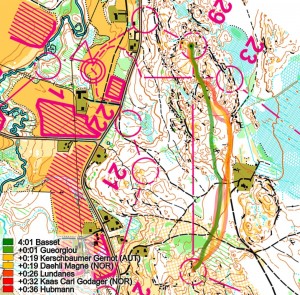 Jan Kocbach is the founder of WorldofO.com - taking care of everything from site development to writing articles, photography and analysis.
@jankoc
Previous WOC 2016 Long: Maps and Results
Next WOC 2016 Long Women: BIG Analysis