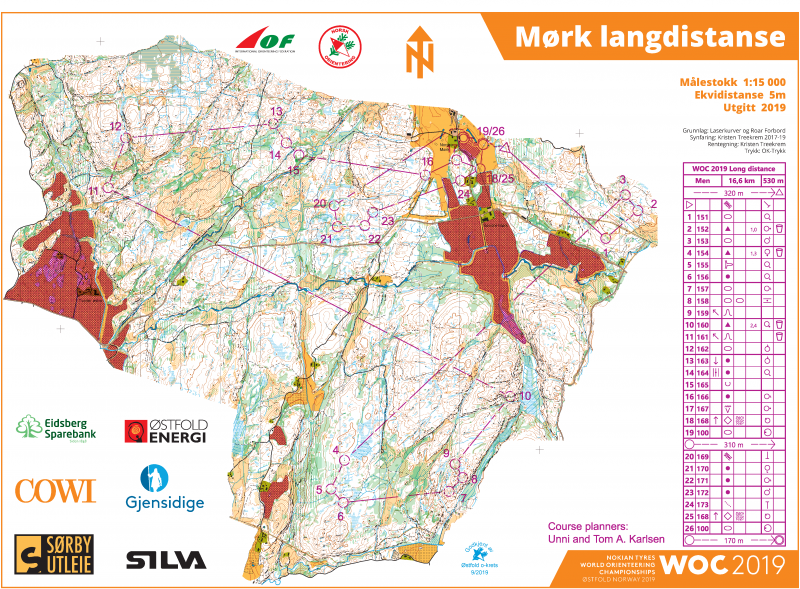 [Article updated with some split time analysis] The big pre-race favourites Olav Lundanes (NOR) and Tove Alexandersson (SWE) won the World Orienteering Championships Long distance – each of them taking the fourth Long distance title in a row. For Lundanes this was his 6th WOC Long gold medal!

While Alexandersson was never threatened – winning with 6(!) minutes ahead of teammate Lina Strand – Olav Lundanes had to battle all the way to the last loop with his teammate – junior Kasper Fosser.

Men: Lundanes strongest in the end

In the men’s class the race was more open, with Lundanes down in 6th place at the first TV control, 14 seconds behind leading Emil Svensk (SWE) who had taken over the lead after a strong start by Matthias Kyburz (SUI). Fosser was down in 7th place at TV1, but run into the lead at TV2 after a very good first long leg from leg 3 to 4. Fosser kept the lead until a small mistake at the third TV control- from there and on Lundanes had slightly higher speed and managed to take home his 6th WOC long gold medal.

The split graph below shows how Fosser has fantastic speed the first part of the course, only one minute behind “superman” (the sum of all best splits) until control 11 – being clearly best on both the long legs. From there and on he lost a lot of time to “superman” – more than 4 minutes! Lundanes did not quite have “superman”-speed, but was still a lot faster than Fosser and could celebrate gold with a victory margin of 1:39. 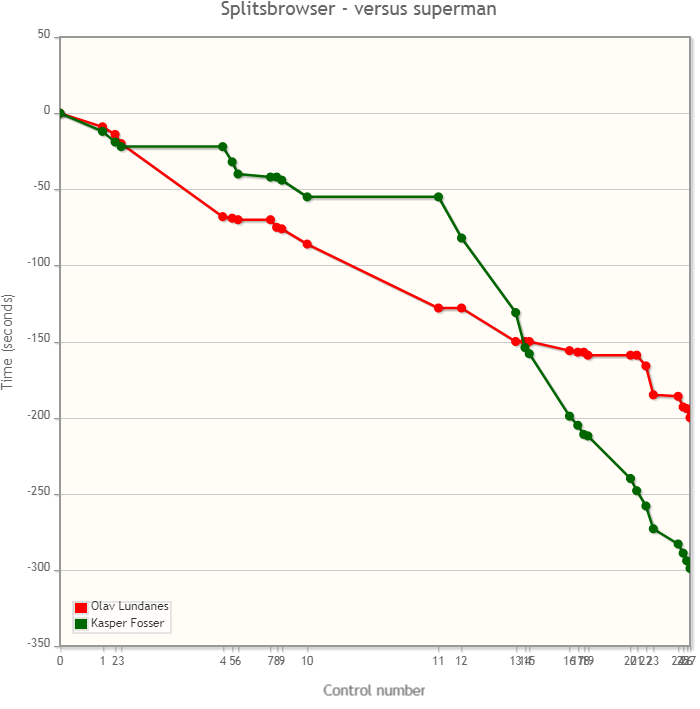 The battle for bronze was between two Swiss runners: Daniel Hubmann (SUI) took the broze medal in this 50th WOC final/relay race! He had a tight battle with teammate Matthias Kyburz which he decided with 3 seconds towards the very end of the race. 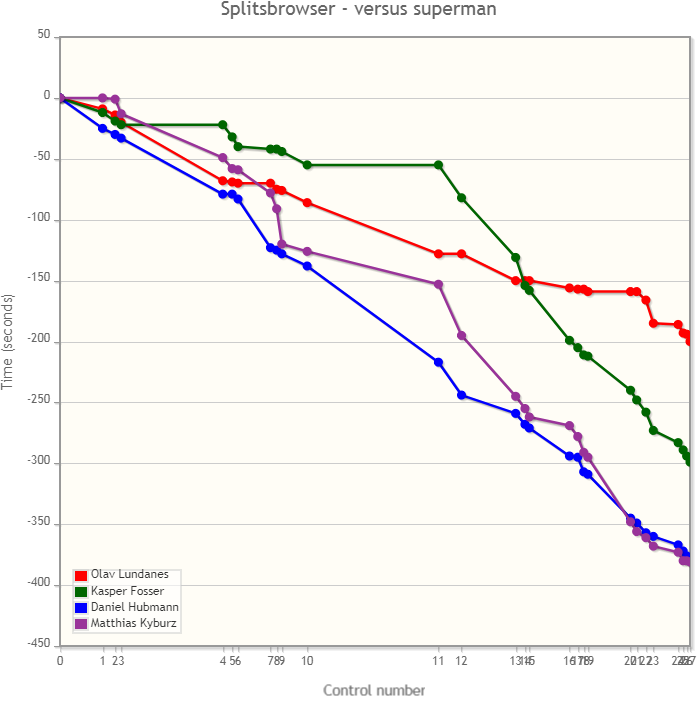 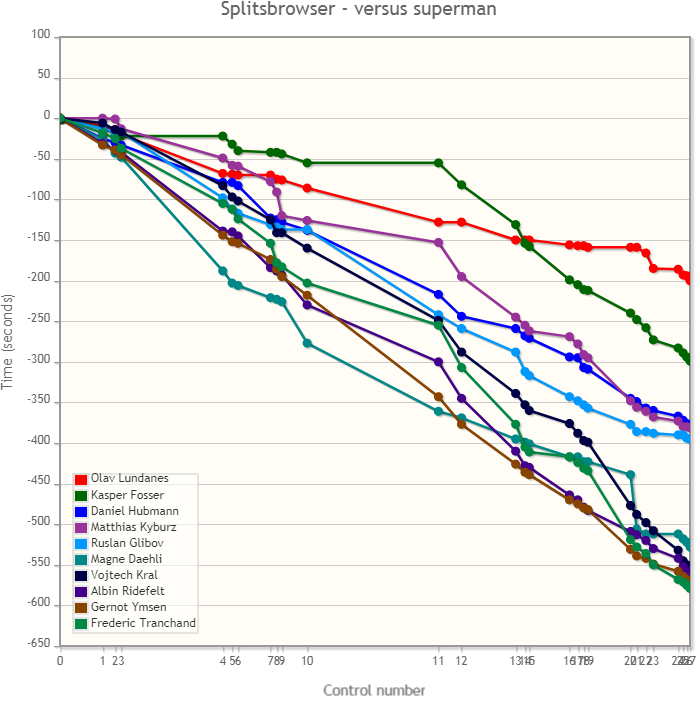 In the women’s class Tove Alexandersson had some small problems in the start, and was down in 3rd place at the first TV control after 1.9 km of running. From there on it was all about Alexandersson. The Swede ran faster and orienteered well – and in the end the gap to Strand was 6:16. First year senior Simona Aebersold (SUI) took the bronze medal after a tight battle with Maria Teini (FIN) – deciding the race for the medal on the very last controls.

Looking at the graphical split times from the top 4, one can see how much better Alexandersson was than everybody else.  Alexandersson lost 50 seconds to the first control, but after that her line is nearly flat, meaning she runs best on almost all legs.  Tove Alexandersson actually won 15 of 22 legs! 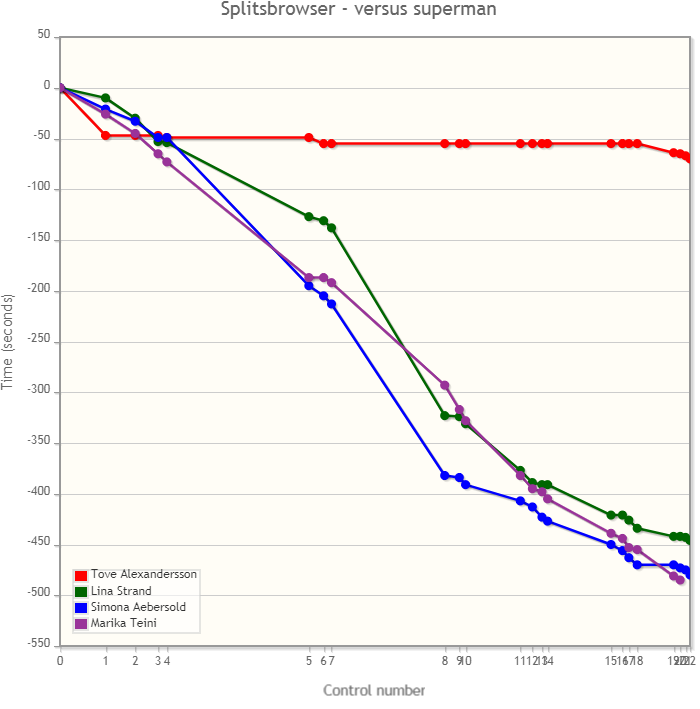 Below you can see the battle for silver – a much closer battle. Marika Teini had the edge in this battle for a long time, but a mistake at the 9th control allowed Lina Strand to get close, and from there and on both Strand and Aebersold ran faster. The decision for bronze was especially at the leg to the 3rd last control. 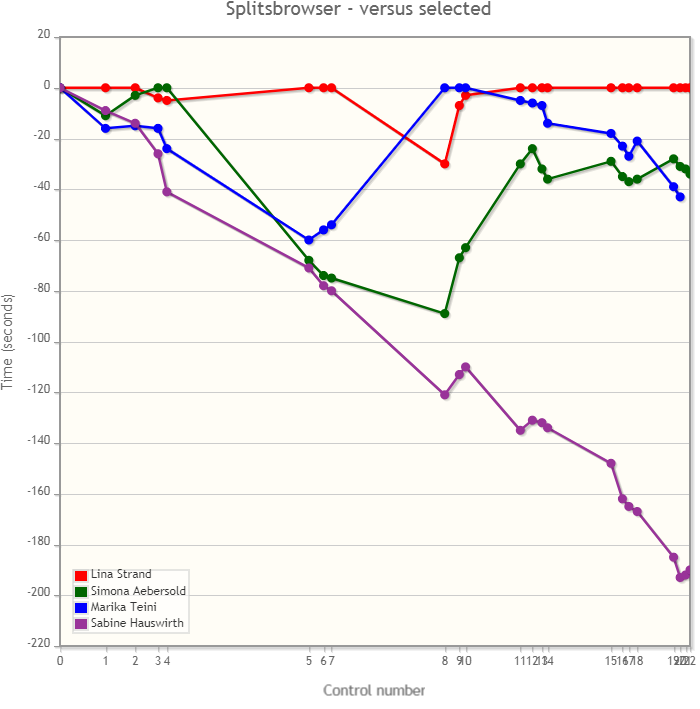 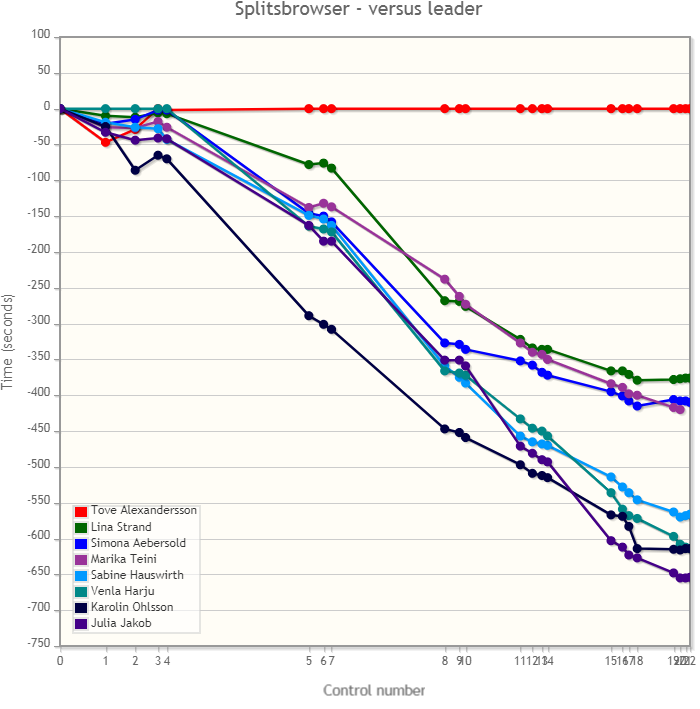 GPS-tracking is available here. See below for maps. 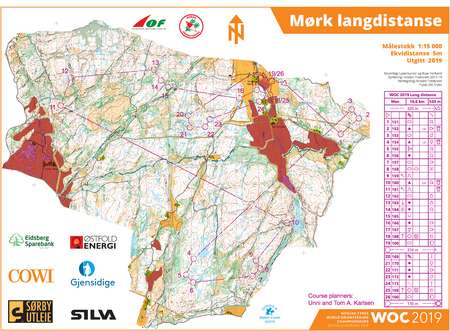 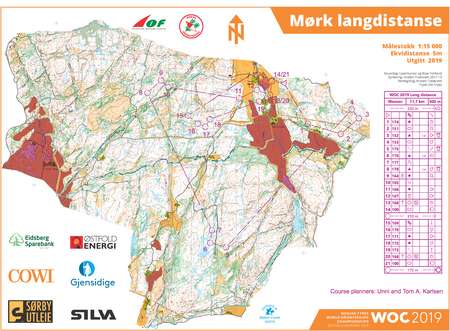