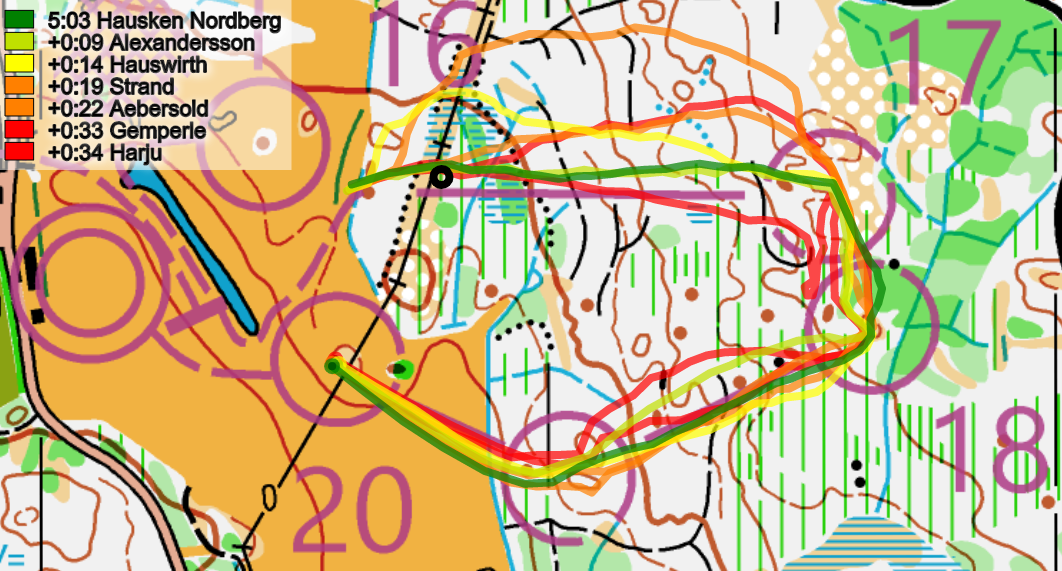 Only 5 seconds separated the gold and silver in the end – and 7 seconds separated Harju/Gemperle in bronze position and Strand in 7th position. And that after 38 minute of intense orienteering. Most of the runners can probably find many places on the course where they lost 5 or 7 seconds – this article focuses on the biggest timelosses for the runners battling for the medals.

We can first take a look at the overall picture in a graphical split time comparison. Here you see how Alexandersson and Aebersold follow each other closely throughout the competition, never more than 22 seconds between them. In the battle for bronze there are much bigger time differences – notably Venla Harju is up in the battle for gold until control 12 where she is just over 20 seconds behind leading Aebersold. 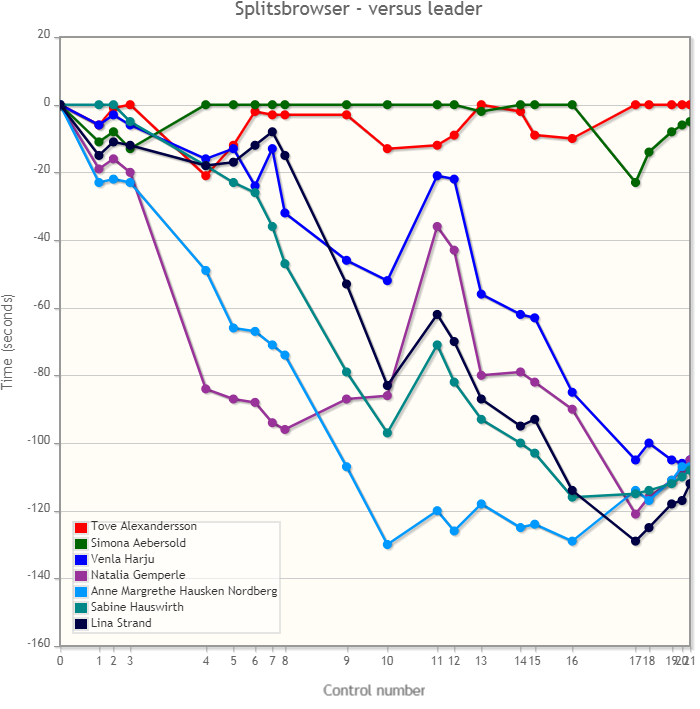 Battle for gold: Alexandersson vs Aebersold 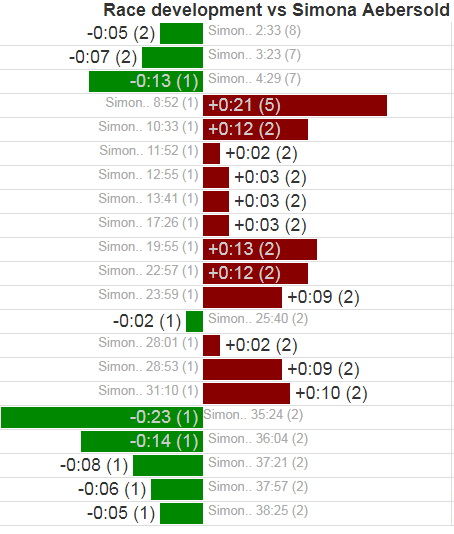 Alexandersson starts the race best and has a 13 seconds advantage after three (quite easy) controls. Then the women head into their longest leg of the day – the leg to control 4. Here Aabersold runs a fabulous leg, and suddenly Aebersold has a 21 seconds lead. Aebersold wins the leg with 19 seconds to Strand by taking a good routechoice to the right. Alexandersson on the other hand runs  to the left on a slower routechoice and loses 34 seconds (still Alexandersson has the 5th best split time, so Alexandersson is still among the fastest). 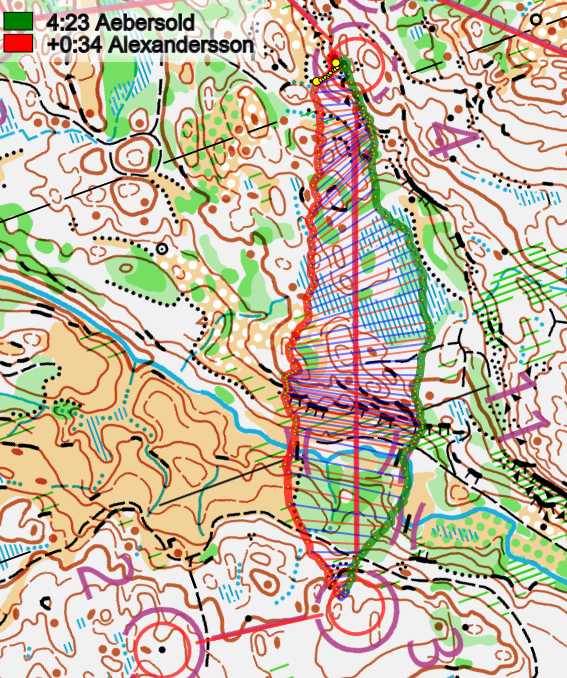 As a comparison, here are the routechoices of the top runners. Note also how Hausken Nordberg (+39 seconds) and Gemperle (+1:17) lose a lot of valuable time in the bronze battle here. 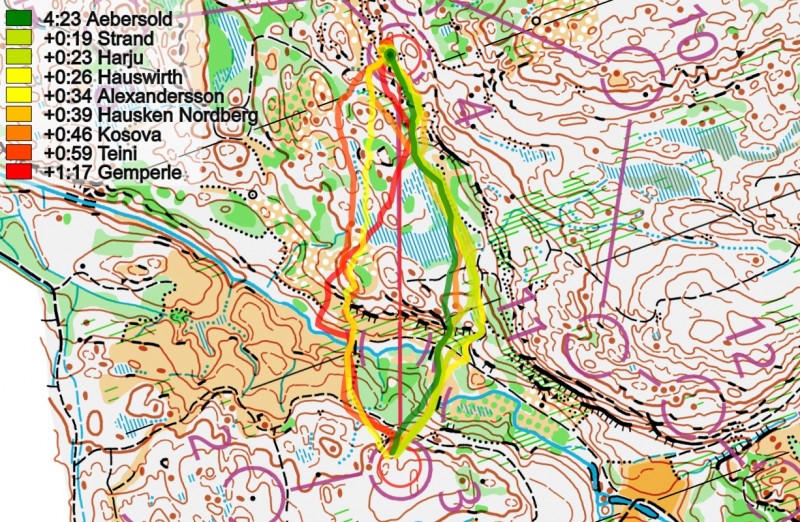 Aebersold makes some small mistakes on the next few controls, allowing Alexandersson to get closer: 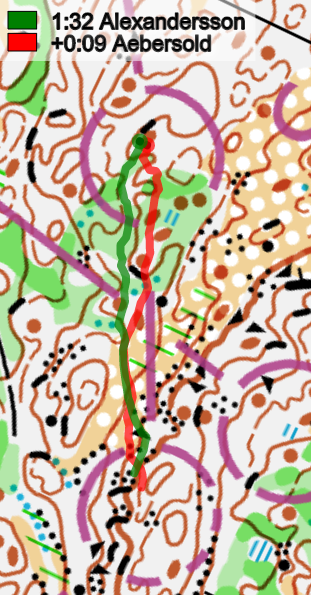 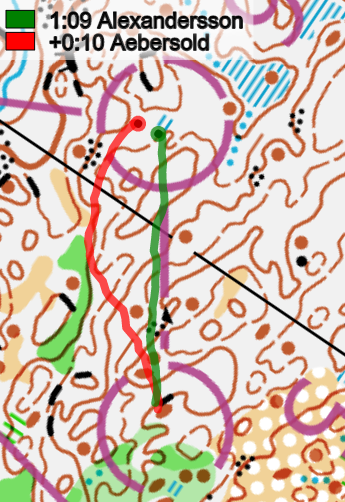 Then there is not much happening in the gold medal battle until control 11. Here both of them made exactly the same 50 second mistake – definitely a place where one of them could have decided the race for good – but none of them took the opportunity. Note also again how Hausken Nordberg loses time here. 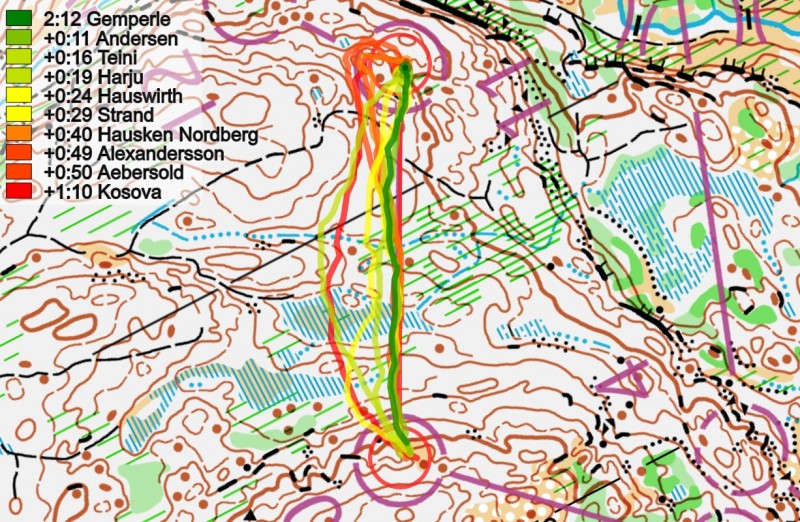 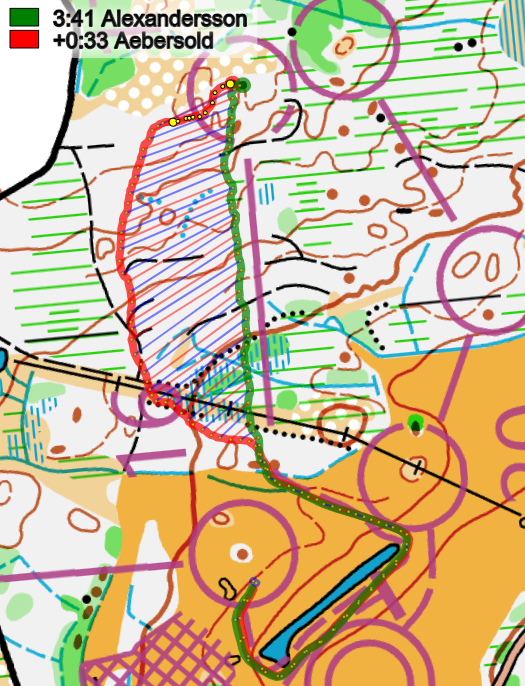 Here Aebersold runs to the left, trying to follow the paths – and loses 33 seconds. Thus the Swiss goes from a 10 second lead to being 23 seconds behind.

And here a comparison of the two throughout the course: 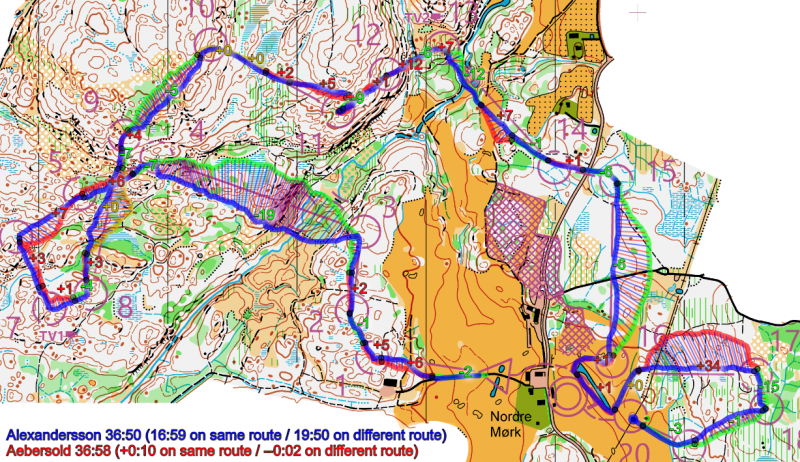 The battle for bronze: 5 women within 7 seconds

The battle for bronze was extremely tight! The below graph compares the 5 women control by control. The two strongest physically today were Anne Margrethe Hausken and Natalia Gemperle – and both had so big timelosses in the start of the race that they were nearly thought to be out of the medal battle: Gemperle 1:30 behind Strand at control 7, Hausken Nordberg more than 1:40 behind Venla Harju at control 12. 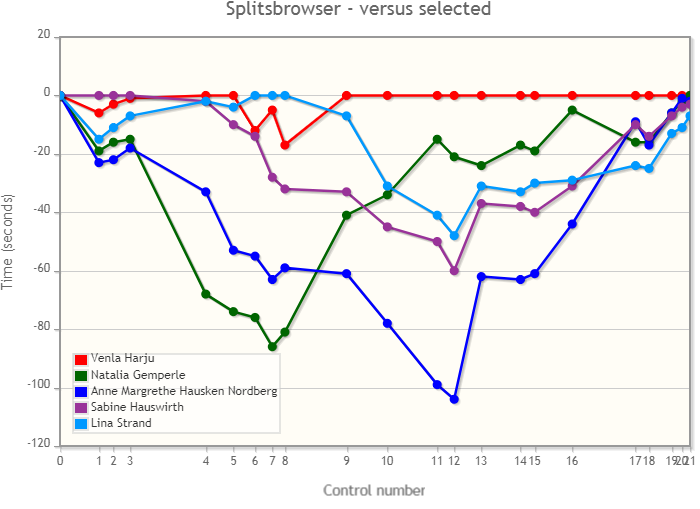 Already to the very easy first control Hausken and Gemperle had trouble, losing around 20 seconds (Hausken loses 23 seconds on a “safe” routechoice to the left). Even Strand lost 15 seconds here. 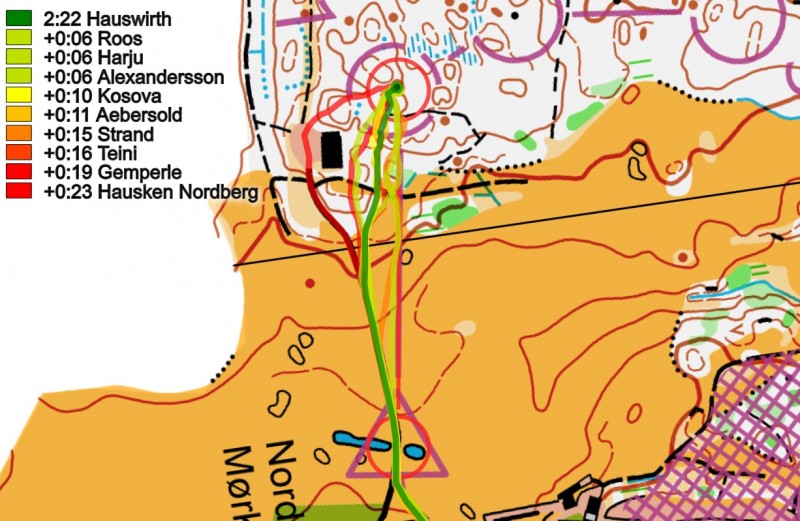 The next big timeloss for the women in the battle for bronze is the long leg to control 4. Here Gemperle takes the wrong routechoice (same as Alexandersson) and loses 58 seconds. Hausken Nordberg does some bad micro-routechoices and loses 20 seconds. 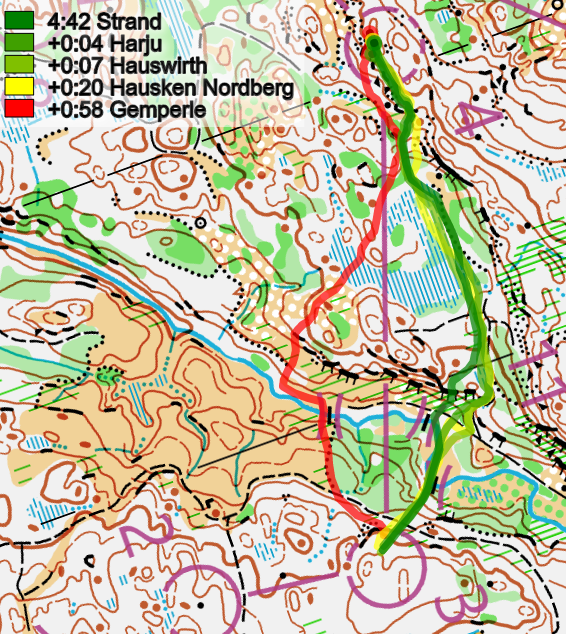 And another 20 seconds timeloss to control 5 for Hausken – while Harju is the one losing 16 seconds to control 6 and both Hausken, Gemperle and Hauswirth lose 15 – 20 seconds to the first TV control on camera (control 7).

Thus we have the following standings at the first TV control with Hausken down in 11th and Gemperle all the way down in 15th!

The uphill leg to control 9 gave even more trouble for Hausken (losing 42 seconds) – and Strand also lost significantly time here (47 seconds). This was an area where it was tricky to find the correct micro-routechoices through the dense vegetation  – a task which Gemperle handled very well. 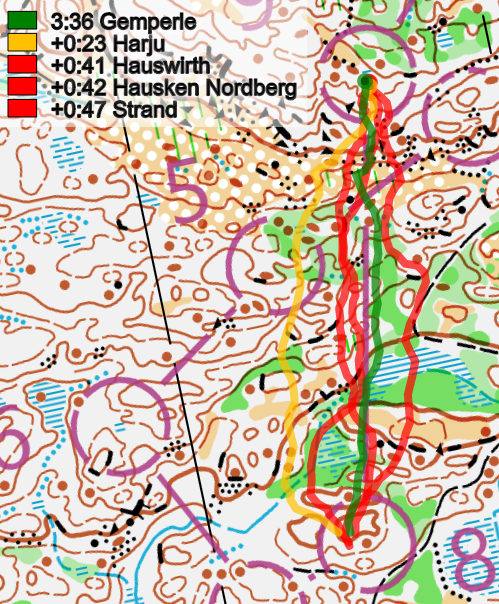 Next up the leg to control 10. Another significant timeloss for Hausken – another strong leg for Gemperle who is now really in the flow: 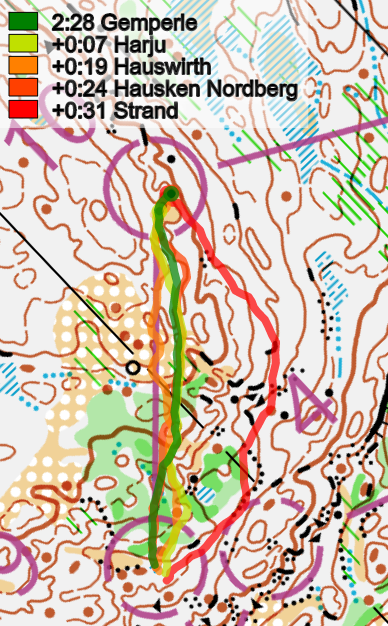 The same picture down to control 11: Gemperle running extremely well, Hausken missing. At this point in the course Alexandersson catches up with Hausken, and they are together from here to the finish (but Hausken is not just running behind the big star of orienteering, she is up and fighting in front). 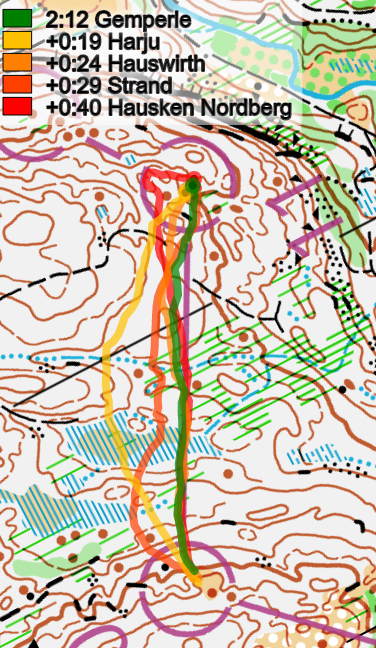 The leg to the second TV-control (control 13) is a tricky one were many men and women lost time. Before this leg Harju was in the battle for gold, but her 42 second timeloss due to taking this control from the right (this is also were Svensk lost his gold medal chance in the men’s class) made it clear that she would be out of the battle. Gemperle also loses a lot of time here (45 seconds). 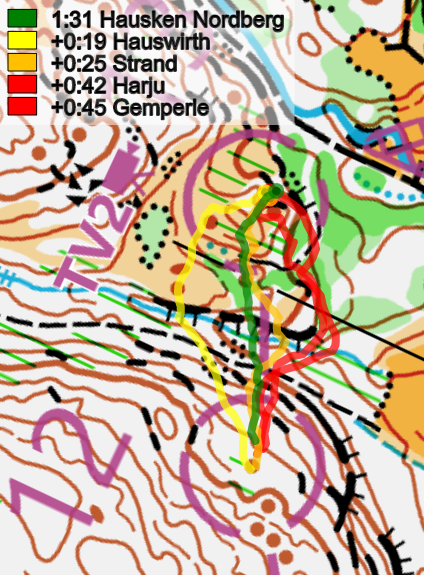 At the second TV-control we then have the following standing:

From here on the course mostly looks like running on the map, but there was still some orienteering left, especially on the last loop with the added pressure of the arena passage and the tough climb up the hill in rough terrain. As Aebersold proved there was even a routechoice option here.

There were some time differences to control 16: 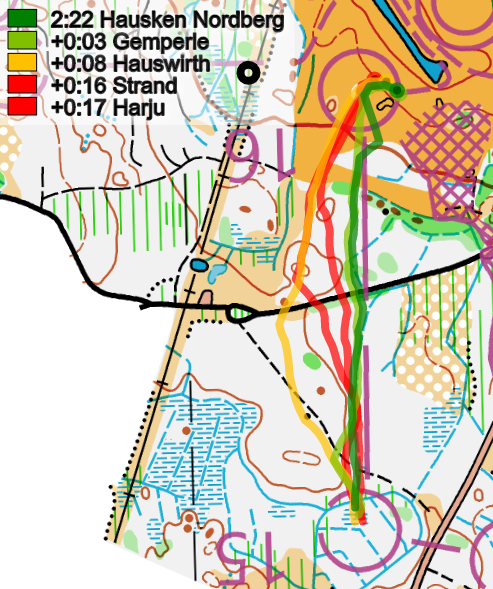 But the big mistakes happened to control 17 where Strand, Harju and Gemperle all lost 30 seconds or more! Gemperle had a real mistake, the other two a small direction mistake. Harju did in addition seem to be really tired at this point of the course. 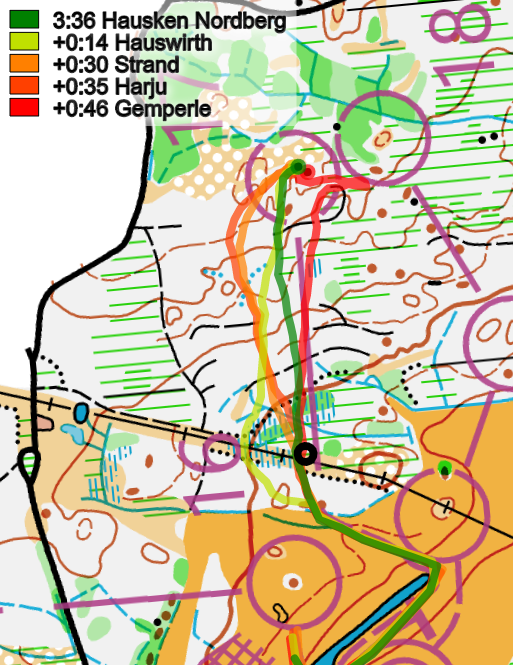 Hausken Nordberg runs so fast up the hill, but does a small miss to 18 were she loses 8 seconds: 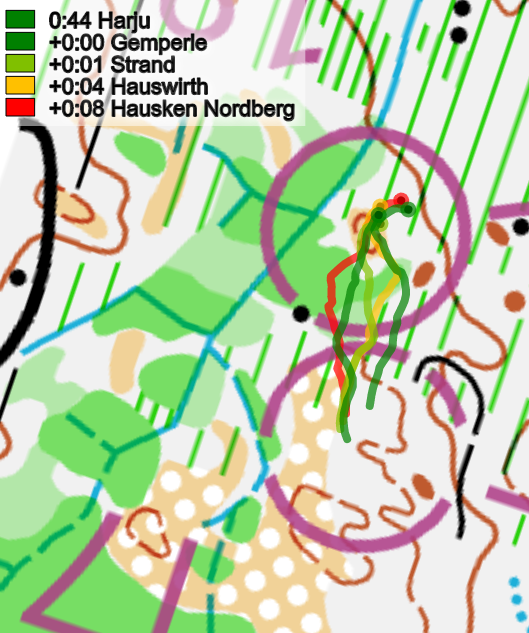 Going down towards the field Harju runs a bit in the wrong direction and loses another 12 seconds, luckily for her it didn’t influence her bronze medal. 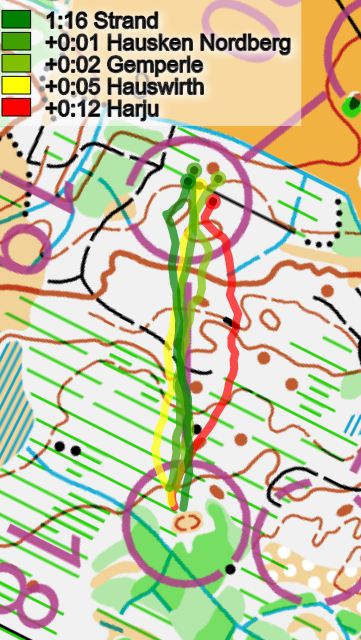 And finally the run-in decided the battle for the medals. Hausken was one second ahead of Gemperle at the last control – but behind in the finish ….