Another step forward for Catching Features! 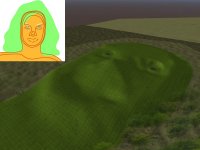 Today the impressive winner maps in the Catching Features Map contest have been announced – and it looks like this map contest has been another step forward in making the orienteering simulator (or game – choose the one most appropriate for you) Catching Features (CF) even more realistic. Using the CF Map Editor – which you get along for free when you buy the game – the participants had 2 months time to make the best maps and terrain for CF in three different categories: “Middle Forest”, “Urban Sprint” and “Other”. – Some incredible CF-architecture work was done in the Urban category, making some of the most visually appealing CF maps to date, says the maker of Catching Features, Greg Walker, when commenting the CF Map contest contributions.

More and more realistic
Comparing the maps delivered by the participants in this Map contest with the early maps in CF (the ones you get when you download the demo version of CF), shows that CF maps have gotten a long way in terms of being more realistic – and also a lot more fun to play! And of course they are more and more usable for real orienteering training – a big leap forward in this regard was the release of the new OCAD-CF converter last fall, which makes it a kids game to convert real OCAD maps to playable CF maps. – CF maps continue to improve in realism and accuracy for a few reasons, Greg comments on this matter. – The new Ocad -> CF converter I released a few months ago makes it much easier to create the base CF areas for a good map. But thats not enough for the truly good maps (like those seen in the competition): it still takes some hard work afterwards to add in the extra details to make a perfect CF map. And the CF community is continuing to experiment and learn the best ways to do this, and so the resulting CF maps continue to get better! 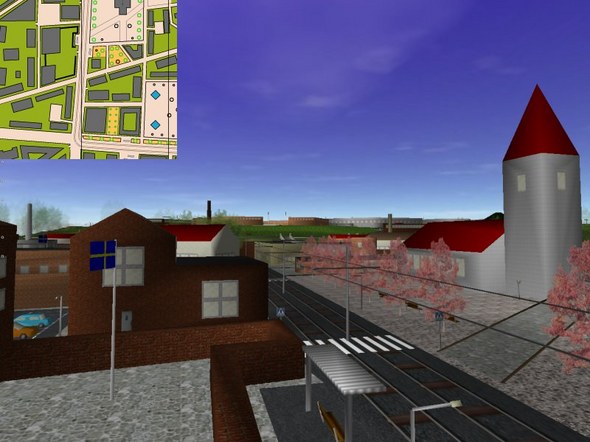 The winner map “Ingalunda City” in the Urban Sprint category by Jari Williamsson.

Many Déjà-vus in the forest
There is still a long way to go to get a perfect orienteering simulation, but CF is already a valuable training tool for many top orienteers. It is well known that this years overall World Cup winner Thierry Gueorgiou has used CF extensively in his orienteering technical training – part of his exceptional orienteering technique may well be learned through playing CF. But others are following him. For example, it has been said that the Finnish team Veve – winners of last years Jukola relay, used CF to prepare for the Jukola relay. 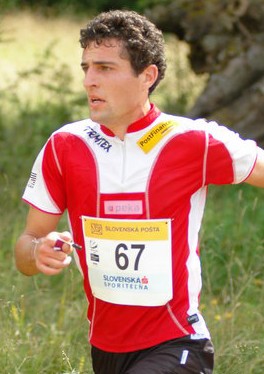 Another elite runner using CF extensively is Swiss Team runner Matthias Merz. According to an article written by Matthias in the Swiss magazine OL-Fachschrift (edition 12/06), he used CF to prepare for the Biofarm-Cup-Final 2006 (one of the most important Swiss races in 2006, held in the terrain of the WOC middle final in 2003 in Trin). – […] before the Biofarm-Cup-Final in Trin I trained with Catching Features. I think that I would have been able to run through the WOC race from 2003 without a map – I had played it that often at the computer. So I got many Déjà-vus in the forest. After the race, I even explained one of my competitors that I found an error in the forest, Matthias explains in the article. And who do you think won the Biofarm-Cup-Final 2006? Matthias Merz, of course…

He also tells how he did make large errors on the extremely difficult World Cup Final Long Distance – in Catching Features (he missed the real-world race due to exams). – With Catching Features, you can train how to generalize the map, and how to handle route choice problems in different problem types, Matthias concludes his article.

Cool orienteering statues
Now back to the CF Map contest: – Excellent. Houses with windows, doors, and chimneys, buildings (CF-shaped!), cars, parking lots, tram tracks, underpasses, more different textures than you can count, some very cool orienteering statues, road signs and store front signs, is Greg’s comment to Jari Williamsons winning map “Ingalunda City” in the Urban Sprint category. – Just remarkable. The best modeled CF map I’ve seen yet! Greg continues. For the people using CF regularly, it is no surprise that Jari Williamsson is among the winners in the Map Contest. Jari Williamsson is known as one of the best CF players and map makers, and also the man behind the CF-OCAD converter tutorial, which tells you how to convert an OCAD map to a playable CF map in a few simple steps. 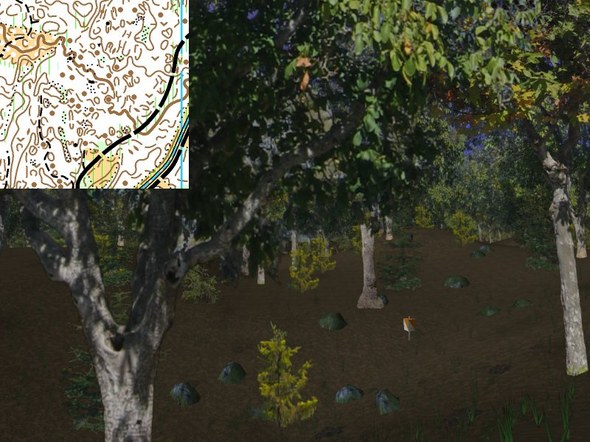 The map “Sekotsuji” – winner of the “Middle forest” category by Jochen Verdeyen.

Jochen Verdeyen again
– Deliciously detailed contours, pits, knolls and little patches of stony ground. The course had lots of controls with quick direction changes all over the place. Tricky enough to be challenging, but enough detail to make it rewarding if you could read it all while running. Start and finish chutes were a nice addition, as was the spectator control, and a very nicely done splash screen made for a good intro. This were the comments of Greg Walker for the winner in the “Middle forest” category of the map contest – the map Sekotsuji, a Chinese map (Update: This map is Chinese according to the information given by Jochen Verdeyen in the map contest, but I got an email from a reader telling me it is the Japanese World Cup map from 2000 – and based on a quick internet search this is correct.) – the map submitteed by Jochen Verdeyen. For those of you who did not read the To JWOC with Catching Features article at World of O last autumn, Jochen is the same man who was featured in the article as the belgian junior who finished in a very surprising 4th place at the sprint at JWOC in Lithuania last summer, owing some of his improvements in orienteering technique to Catching Features. 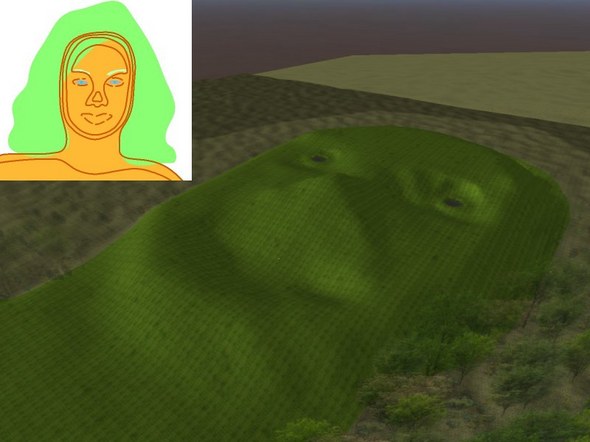 The winner map “1st Woman” in the “Other” category.

1st Woman
The last category in the CF map contest was the “Other” category. The winner in this category (and actually the only participant) was Greg Flynn with the map “1st Woman”. A very special orienteering map – to which the judge comments – It certainly delivers what it promises. May not be appropriate to play at work =).

Play it now!
I am sure that what is on the mind of many of you reading this article now, is to play these courses! So Greg, when can we compete on these fantastic maps? – Tomorrow! I uploaded the winners to the normal Competition system and we are going to run a series event there. The 3rd place maps will open on Thursday, the 2nd on Friday, and the 1st on Saturday. After all the races are complete early next week I’ll release all of the maps for download. For those of you interested: You find the tournament here – and can access the maps through the normal competition system in CF.

Note: Relevant links for this article are to be found below the interview!

Interview with Greg Walker – the man behind CF 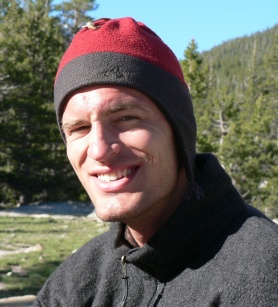 Greg: There are a lot of limitations on how realistic you can make terrain in CF, mostly because of the way the game engine was created. I started the CF project about 8 years ago, and have learned many things through trial and error. Since then I’ve mananged to fix some of the bigger limitations – to allow bigger and more complex maps – but there are still some fundamental problems that I can’t easily fix without rewriting the entire game engine. And at a few hundred thousand lines of code thats no easy task!

Also I have held back from adding some features to CF because it is limited by the video card hardware that people are using to run it. The original game was released with very low requirements so that you wouldn’t need the latest technology to run it, and I’ve been trying to keep it that way. So I’ve had to pass on adding more modern rendering techniques because they are not supported in the older video cards.

So the next big leap in realism will likely come in CF2, which yes, is definitely planned. At this point development on it is moving very slowly, as my time is split between several projects, so I’m still working on some of the base technology to be used for it. I have very big ambitions for what CF2 will be, we’ll just have to wait and see if they are possible =) But for now much of my time is split between working on the CF map converter and a third project (also orienteering related, but I can’t say much more at this point).

Jan: Was CF planned as a game or a training tool or both from the start? How does it feel to have developed a game which is actually used as a training tool for part of the world orienteering elite? Do you think CF will be used by even more top orienteers for technical training in the future when (if) the terrain models get even more realistic?

Greg: It was planned as both. The originally released version of CF came with a few maps to run on for a fun game, but also had the map
randomizer to allow for lots of training on different maps. Since then I’ve improved the post-race course reviewing system, which I think allows for better analysis of your race, and also added the quickly-grown-huge online Competitions system, which is definitely both game + training.

I think its great that many people use CF for serious orienteering training. Obviously CF alone can’t make you a great orienteer, but I think like many other training techniques it can provide one element of a successful program. Its main advantage is that it allows you to experience terrain types that are not readily available in your local area. And as the realism of the terrain in the game improves in the future, this will certainly become even more useful.

Jan: Is your “real work” making computer games – or something completely different?

Greg: Yup, I work for a game development company called Pandemic Studios here in Los Angeles. My last two games were the two Star Wars Battlefront games, where I programmed the AI for all the bad guys.

Jan: I see from your Attackpoint training log that you are training quite seriously these days, and it looks like you are maybe trying to qualify for ski-woc in Russia. Any words about your ambitions as an orienteer?

Jan: Will you make it possible to import the new textured kml-models of buildings/cities being developed for Google Earth in CF?

Greg: This I actually looked into, but there isn’t an easy way to publicly access the model format data of all those buildings. Otherwise that would be a great resource!

Jan: Thanks a lot for your time, Greg. And keep up the good work!

(The picture of Greg Walker is taken from the Raid Across America 2006 Biography.)