Australian Hanny Allston was not surprisingly voted as a very clear number one in the “Junior of 2006″ category in the “Best of Orienteering 2006″ poll staged by the two major source for international orienteering news – the website World of O and the magazine Orienteering Today. With 727 votes, Allston got more than three times as many votes as Russian Taniana Kozlova. With a Gold medal from the Sprint distance in the World Orienteering Championships, a Gold medal from the Long distance in the Junior World Championships in Lithuania, and a JWOC Silver medal in Sprint – Allston did not give much chance for her contenders.

Third in the “Junior of 2006″ category was the Danish Søren Bobach. Thus, also in the junior category there were two women on top, with the best man in the third place.

Jan Kocbach is the founder of WorldofO.com - taking care of everything from site development to writing articles, photography and analysis.
@jankoc
Previous Simone Niggli-Luder: Achievement of 2006!
Next Poll 2006: Lucky winners 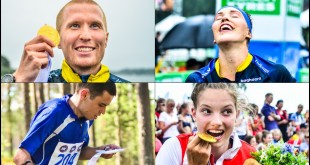