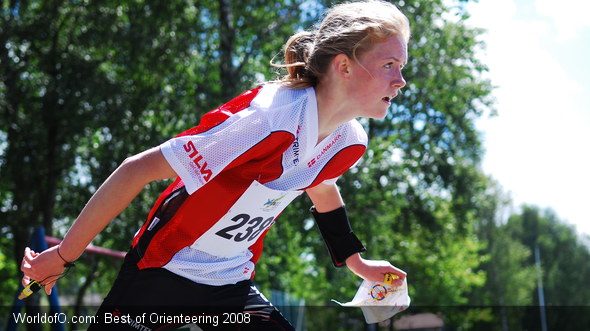 Emma Klingenberg surprised everybody – including herself – by winning the gold medal at the Junior World Champs Sprint in Gothenburg this year. Below Klingenberg is presented for the nomination “The Ultimate Junior Orienteer of 2008″ through an interview made by World of O and Ultimate Orienteering. 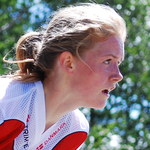 Give a short presentation of yourself.
My name is Emma Klingenberg. I’m 16 years old, born in ’92. Both of my parents, my two sisters and my brother run orienteering, and we’ve been running for the past 10 years, tough I fell like I’ve been running my whole life. We run for Faaborg OK, and we travel quite a lot, especially in Sweden and Ireland (I’m half Irish).

I have just started a three years education at a “gymnasium” (like high school or grammar school). Besides orienteering I like to play the guitar, and I enjoy spending my Friday afternoons with my friends from school.

What was the highlight of the 2008 season for you?
This year’s highlight is without comparison my win at the JWOC sprint! I became the youngest junior world orienteering champ. It was completely unexpected, and therefore even more overwhelming. What I remember best is the thrilling minutes standing among the Danes, while waiting for the last runners to head to the finish. And the euphonising felling of happiness that almost blew me away, when it was finally announced that I was the new junior world champ! Now several months after JWOC I’m not even sure I have completely understood what happened that fantastic day.

In the months between JWOC and EYOC I thought a lot about how I would tackle my nerves. Over and over again I tried to imagine myself standing in the start box at EYOC. My mental training seemed to have worked, because I felt surprisingly calm and concentrated during the races at the youth European Championship.

It was completely unexpected, and therefore even more overwhelming

What is your thought about being nominated for the orienteering achievement of 2008?
I am surprised but of course very happy to bee nominated as “The Ultimate Junior Orienteer of 2008″. It’s a great honour even to be considered as worthy for the title.

What are your main goals for the future?
I am still quite young, and I am not completely sure what my main goals are in the long run. Though, I hope to get on the podium again at JWOC 09 in Italy (sprint or middle-distance). But if not next year, then hopefully in 2010 when JWOC is in Denmark.

Where is your favourite place to orienteer – where you would advice our readers to travel?
A few weeks ago, (just after EYOC) I was on training camp in the very mountainous Bellinzona, South Switzerland. The terrain was amazing with its step slopes, soft curves and big areas with very few details. On almost every training course there were several hundred meters of increase, and that of course made the training very physically demanding.

Can you describe your thoughest training week in 2008 (day-by-day)? Did that have any specific impact for your great achievements in 2008?
I think the training camp in Switzerland has been my toughest but also the most exciting week of training this year. The technical and physical challenges that I meet in Bellinzona, has defiantly been good preparation before next years JWOC in Italy.

My mental training seemed to have worked, because I felt surprisingly calm and concentrated during the races at the youth European Championship

Are you a professional orienteer? How many percent is your work/study that you do besides orienteering compared to a full position – and how many hours do you train each year?
I don’t really look at myself as a professional runner. I run orienteering because it’s the best thing I know in the world, and I can’t imagine myself doing anything else. Two years ago I started to train on a more serious level than earlier. It’s difficult to say how much I train each year, because the amount of training is continuously increasing. Two years ago I trained 4 times a week – today I train 7 times a week. Of course it takes a bit of planning to fit my training with my studying, but until now I have managed to get along with both, without big complications.

In your training: Do you put priority on running in the forest or on the road/track? What is your PB in 3000m/5000m?
I prefer to run with a map and as far as possible I always run in the forest. In a normal week of training I run at least 50 % of the time in intensity zones 4 and 5 (86 – 100 % of max). Instead of long trainings sessions, I prefer to run with high intensity. My training sessions are seldom longer than 60-70 min.

The most important thing for me to remember when I run orienteering is that I have to enjoy what I’m doing. And I do – I love to run orienteering. Of course it is great in the periods were you get good results and you fell like everything is going well. But if you can still be happy whit your sport, even when you fell in bad shape or your technique fails – that’s the most important!

Jan Kocbach is the founder of WorldofO.com - taking care of everything from site development to writing articles, photography and analysis.
@jankoc
Previous Best of Orienteering 2008
Next Søren Bobach: Presentation