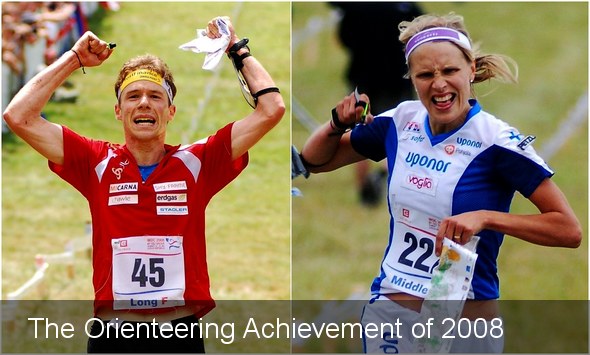 The vote has been decided by the big international readership of World of O and Ultimate Orienteering – more than 3500 unique votes from 52 different countries have been delivered, making these results very representative for the worldwide orienteering community. Read on below the results to find interviews with Minna Kauppi and Daniel Hubmann. 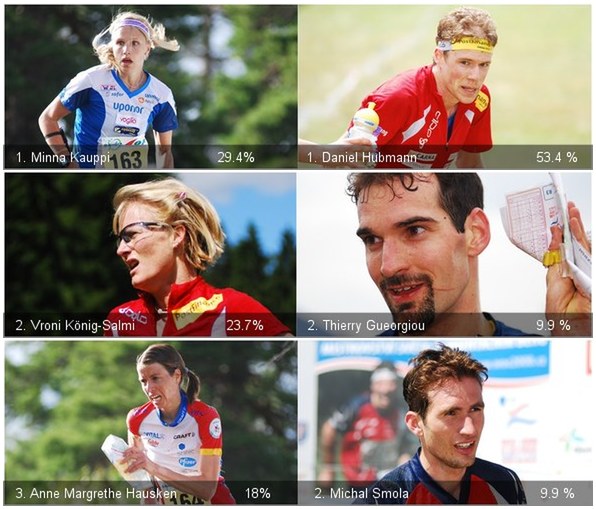 Congratulations on being awarded “The Orienteering Achievement of 2008″! You won a clear victory ahead of the comeback of the year – Vroni Salmi-König.
Thanks! So this was basically the same situation as in WOCs middle distance this year;)

You had a fantastic World Orienteering Championships in Czech Republic which the orienteering community appreciated as the best achievement of the year – what are your best memories of the week in Olomouc when looking back at it now?
Of course everything culminates on my work during the middle distance. I knew what I was doing, and pushed all the way till the end. On the other hand, the city of Olomouc was really beautiful too, and i enjoyed being there as well.

Anne Margrethe Hausken took all the attention after the World Orienteering Champs with her O-Ringen victory and her Overall World Cup victory. But you performed best when it really counted the most – at the World Orienteering Champs. What is your secret to perform well at the big happenings in 2008?
I knew I couldn’t be in my best shape in all the competitions this year due to all the problems I had, so I was forced to concentrate on the WOC only. This was maybe my weapon this year, as I didn’t really care of the rest of the competitions. On the other hand, when it comes to O-Ringen, I was too satisfied already, so it didn’t really matter anymore. For me it’s always about the mood which takes the good results!

Next year Simone will be back – and Hausken is surely hungry to perform well in the World Orienteering Champs in Hungary. What are you doing this winter to improve even more in 2009?
I’ll try to do everything better than before, but at the same time, I want to keep the training and all the fun, so that I won’t take it too seriously in the WOC either.

How are your preparations for 2009 going? Just fun & partying – or has the serious training started?
I’ve started training already, but unfortunately I’ve been forced to make the trainings according to other events. It’s been too big a fuss in these special media events lately, so it’s been really hard with all the interviews and all the big parties. But I really hope that the media leaves me alone now as I won’t answer my phone anymore;) So, from now on I’ll be training like crazy, and enjoying the winter sports in Finland!

Any final word to all your fans out there?
Thank you all! This is a big honor to me, and I hope we’ll keep on making big NOISE in the competitions! 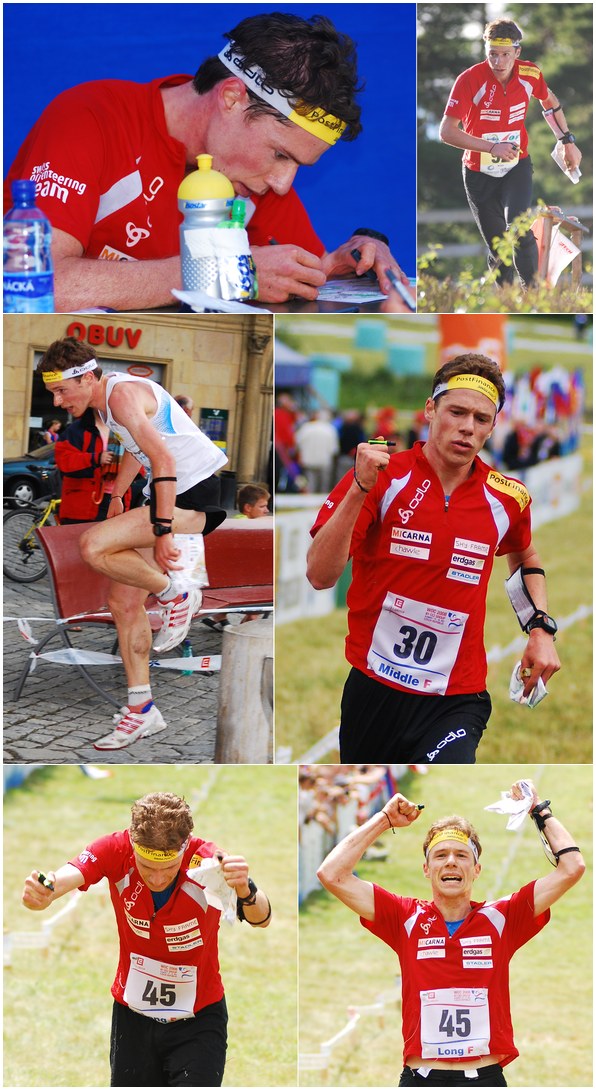 Congratulations with a fantastic season – and the award “The Orienteering Achievement of 2008″! The orienteering community really appreciates your achievements this year. Can you find a special reason why you took the final step up on the podium this year?
Thank you! Of course it’s a great honor to me to be awarded. My season went really good, I had no problems during the last year. I guess that was really important to built up the self confidence. And of course the luck was on my side this year. in 2006 i just missed the woc gold by one second…

You actually got more than 50% of the votes – the next two – Thierry Gueorgiou and Michal Smola – both have around 10%. A very clear winner you are!
Wow, I’m surprised to see to this clear result! Thierry is still very famous in the orienteering world, and had a good season too. Of course it’s nice to feel many people think you deserved the gold medal.

We admired the way you kept being very satisfied with all your silver medals – at least that is what you said when asked. I guess there was some disappointment anyway – and a big relief when you got your WOC gold medal?
With the first silver medals in my career, I was very pleased. But of course, after 2-3 times, there was always a small disappointment, too. I just tried not to put too much pressure on my shoulders, and with every silver medal more, i realized the gold medal was coming closer…

What do your days look now, in the middle of winter?
The plan was to start the serious winter training in beginning of December. Unfortunately I have some problem with a small knee injury right now, so I can’t train to much at the moment.

How are your plans for the rest of your preparations for next year. Have you made any big changes compared to this year?
I have made no big changes. The last years I had always the same style of training, and it worked. So there is no reason for a big change…

Have you got any final words to all your fans out there?
It’s really nice to have such support from all the orienteering people. Thank you very much for all this votes!

Vote for the Orienteering Achievement of 2008!

Voting for the “The Orienteering Achievement of 2008″ has now opened – and will be ...