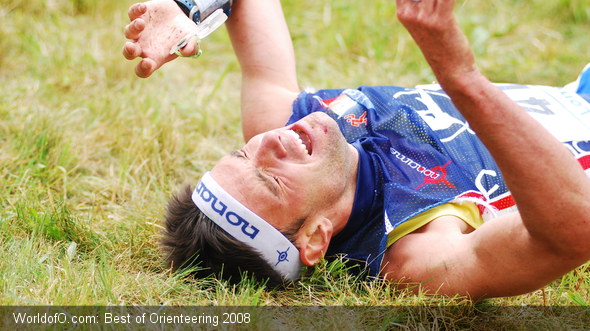 – Actually I’m not sure if my biggest achievement was to get a bronze medal in long distance in the World Champs or “almost” manage to reach a 4000m legendary summit in the French Alps. Both experiences were extremely challenging and I was immediately thinking to try again with “better style” the next time, Francois Gonon explains his highlights of the season – and his goals for reaching even higher next time! Gonon took the first French WOC medal on the long distance – and also the first individual French WOC medal by anyone else than Thierry Gueorgiou. Below Gonon is presented for the nomination “The Orienteering Achievement of 2008″ through an interview made by World of O and Ultimate Orienteering.

Nominated for: A very strong Bronze medal at the WOC Long distance 2008 – climbing out of the shadows of Thierry Gueorgiou – showing that French Orienteering is a lot more than Gueorgiou! 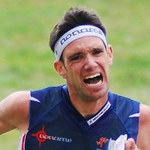 Give a short presentation of yourself.
I am 29 years old, born in Saint-Etienne and so far I have been living there. Right now, I have some serious plan to move to the French Jura (next to Swiss border and to WOC 2012 area) for the coming years. I started orienteering in 1992 and I trained the last 13 years with Saint-Etienne “Pôle France” (O’training center). This season I managed to be back in top shape just in time for world champs after some over-training “small troubles” earlier in the spring.

What was the highlight of the 2008 season for you?
It was a lot of nice happening this season again…. actually I’m not sure if my biggest achievement was to get a bronze medal in long distance in the world champs or “almost” manage to reach a 4000m legendary summit in the French Alps. Both experiences were extremely challenging and I was immediately thinking to try again with « better style » the next time !

I got a nice self confidence and satisfaction feedback after my long distance race in world champs. And in same time I got a clear overview of what was still missing to run 1’57 faster too. So almost just after the finish line, I was already thinking about the best way to be stronger, about some more quality training and some better preparation for coming years. WOC 2009 was already starting !

What is your thought about being nominated for the orienteering achievement of 2008?
It’s always nice to be in the list… but it’s lots of other good and talented orienteers around, and I have a great respect for them all.

What are your main goals for the future?
I like to think that the last 2 years results were just a step to some much better onces in the future. I still have lot of aspect to improve in my performance and my plan is to compete at least to 2012 in Switzerland. So, if I’m right, it means 4 world champs left… It’s time to make my dreams come true, let’s train more !

Where is your favourite place to orienteer – where you would advice our readers to travel?
Likely it’s plenty of dreaming places to orienteer… it’s an all life project to visit them all !

At the moment the number one on my list is NOM 84 map near Sørreisa (Troms). If you are a good fisher, you can easily stay with your tent during one week up on this plateau and have fun with O’sessions twice a day.

Couple of places in Finland (like Paimio area), Pegerinos (Spain), Sisteron & Aveyron (France)… are top ranked on my list too. But I couldn’t remember any good quality maps in Sweden… ?! Do you? ;-)

Italian 5 days next year in Dolomites will be most probably something to experience. Orienteering in the morning and long distance running in mountains and climbing in the afternoon, I’m already enthusiastic about this trip.

Can you describe your toughest training week in 2008 (day-by-day)? Did that have any specific impact for your great achievements in 2008?
I don’t know about the toughest but the most enjoyable was probably a ski camp in Lapland (Yllas) last winter with my Finnish mates. We trained nearly 30h this week with mostly classic skiing, running intervals, strengths trainings, running technique and sallybandy. I believe it’s important to do something crazy a few times a year.

Since running long distance in the world champs is extremely demanding mentally, technically and physically, I believe a good preparation for this situation is to push yourself few times a year to your extreme limits… (well… you don’t necessary need to follow this opinion…). On the other hand, my standard and most efficient training is based on daily routines.

Anyway, I try to keep in mind Nick Manfredi’s good advice : « If you want to be a Champion, you have to use your brain… » See video here.

My main training philosophy is to enjoy and have fun as much as possible. According to this definition, running on athletic track is not my favorite practice

Are you a professional orienteer? How many percent is your work/study that you do besides orienteering compared to a full position – and how many hours do you train each year?
No, I’m not a professional. I’m working part time for the French orienteering federation for last 2 years. I have trained nearly 660h and traveled ~130 days this year… On the other hand, I’m working on a project to develop orienteering in the French education system (www.oplus-ffco.fr). So far, this professional activity has been extremely interesting.

In your training: Do you put priority on running in the forest or on the road/track? What is your PB in 3000m/5000m?
I try to avoid road running as much as possible. Running off-tracks is much more fun and I guess much more efficient for orienteering. This year I have been running ~250h and orienteering ~240h. The previous years (1994-2007) running + orienteering was about 80% of my training (40%+40%). Last autumn (2007) I decided to include more alternative training in my weekly program, so I have been climbing (indoor) twice a week and skiing 1500kms last winter.

My main training philosophy is to enjoy and have fun as much as possible. According to this definition, running on athletic track is not my favorite practice… I have been running twice 3000m both without specific preparation (9’10 during autumn 2006 & 8’43 during spring 2007). Now, if I manage to find motivation for a third session my only goal will be to run faster than 8’35 which is the French record in women class… after that I will probably stop this long athletic-track career.

On the other hand, we have a « fantastic » running test near Saint-Etienne which is about 500m climbing on a small track. My personal best is 20’43 and you are very welcome to try it… this is what I call a nice and enjoyable training session ;-)

Jan Kocbach is the founder of WorldofO.com - taking care of everything from site development to writing articles, photography and analysis.
@jankoc
Previous Jamie Stevenson: Presentation
Next Vote for the Orienteering Achievement of 2008!