Let us hope GPS-tracking is set as a requirement for the organizers in the future. I think this was the last EOC/WOC without live GPS-tracking – time will tell if we are there yet…

The remainder of 2010 looks good for the international races: The World Champs in Trondheim will have GPS-tracking, Jukola, most of the Nordic Orienteering Tour, EYOC in Spain will also, and so on (for JWOC in Denmark there will be no GPS-tracking – see comment below).

During the last week, I have followed the European Championships closely. The organizers had some problems with live results / live speaker sound in some of the competitions, but overall either results or speaker sound worked for most of the time – making it possible to follow most of the excitement from all around the world. This was nearly good enough for the core of the orienteering community, but some probably turned their attention to other matters when the coverage stopped working.

Required coverage in the future

In my opinion, this is what is required for the core orienteering community to be interested in following the competitions in a championships:

If you want to attract a broader range of the orienteering community, you have to add:

The future looks bright for the orienteering community who wants to follow their heroes – watching their every step from far away. It also looks like we are getting closer to the productions which can get viewers outside the orienteering community: The plans of the World Champs in Trondheim this year seems very promising – and with World Champs in France, Switzerland and Finland coming up the next years – and EOC in Sweden in 2012 – there should be good chances for a lot of high quality productions. The plans for coverage of the Nordic Tour and most of the remaining World Cup competitions this year also looks good. However – the downside is that this evolution in technology makes it more difficult for less developed orienteering nations to organize the important races in the future…

After co-authoring a report on separating runners in orienteering, I was very curious about how the organizers/route planners had solved the problem of separating the runners. It is difficult to make a real conclusion before seeing splits in a form which makes it possible to make a proper analysis – and before seeing route choices of more runners – but here is a preliminary conclusion:

Without being in the terrain, it is difficult to say too much else about the maps and courses. From the comments I have seen, some were disappointed by parts of the terrain being “only typical continental” and not really interesting – others were happy with varied orienteering.

Is Twitter finally coming to elite orienteering? During EOC, the World of O frontpage has featured the latest tweets from “Elite Orienteering related Twitter users”. I have tried to get the top runners to use Twitter before, but still only a very few have taken it up. During EOC, Eva Jurenikova (Czech Republic) and Christian Bobach (Denmark) gave us some insight into what was happening “behind the scenes”. I hope more will follow – please let me know if there are some missing on my list. And if you are a Top Elite Orienteer: Twitter is a good and little time-consuming way to share your thoughts with the community. 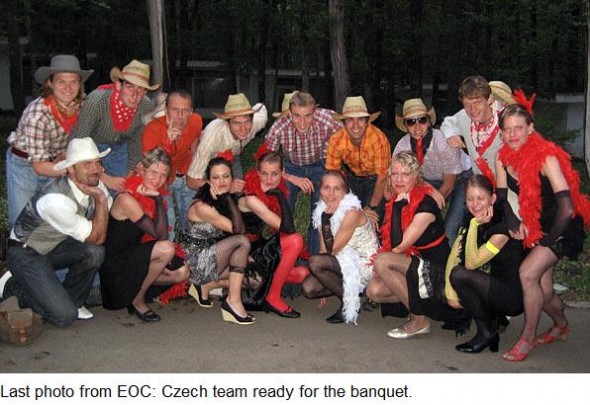 Last photo from EOC: Czech team ready for the banquet. http://twitpic.com/1ultx2less than a minute ago via Twitpic

5th. For the first time among 6 best at big champs. Would not believe my performance is enough for it. Many small mistakes. 5 Czech wome …less than a minute ago via txt

Oh no, Karro ruptured her Achilles tendon during middleF.less than a minute ago via web

Finally a few words about the EOC coverage at WorldofO.com. The coverage has been quite extensive. Several articles have been published each day – and the Fantasy World Cup has been updated after each final. Total pageviews at WorldofO.com during the EOC-week has been more than 110.000. In addition I had a LiveBlog open at WorldofO.com at the Sprint Finals and the Long Finals – each attracting about 5-600 viewers live – and many more in replay mode. A fun week – with a lot of interesting orienteering!

As I know most of the readers of WorldofO.com are crazy for maps – here are the maps from EOC 2010 again:

Jan Kocbach is the founder of WorldofO.com - taking care of everything from site development to writing articles, photography and analysis.
@jankoc
Previous Fantasy World Cup: RLD-observer on top!
Next Nordic Orienteering Tour: All you need to know