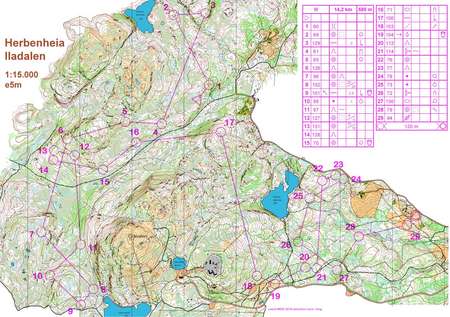 The Czech trainer Radek Novotny has gotten impressive results out of his team the last years – can they continue the same way in the Nordic terrain in Trondheim? The Czech Team had their selection races in parallel with the Nordic Orienteering Tour – skipping the NORT altogether in order to prepare as well as possible for the World Orienteering Champs in August this year.

Devoted people do their best preparations

Czech Republic has outsiders in nearly all disciplines in the World Championships this year – although the Nordic terrain does not fit the Czech runners as well as terrain in which the last international championships have been held. Dana Brozkova has won a gold medal in the World Champs the two last years – on home ground in 2008 on the long distance and last year in Hungary on the middle distance. In 2008 the Czech Team also took two more medals – the silver medal of Michal Smola and the bronze medal of Radka Brozkova on the middle distance.

– Obviously, here it will be a bit more difficult for us to attack the podium than in central Europe, but when devoted people do their best in the preparation, there is always a chance, says Novotny.

– We focus on our performances, we´ll see in the finish how high we can get, Novotny continues.

Both the Czech men and women have been close to the medals in the relays in the last international championships – the women team being in the lead at the start of the last leg at the European Champs in Bulgaria this year, and the mens team being part of the “relay incident” in Hungary along with Norway, France and Sweden last year. Is the relay the best medal chance for Czech Republic in Trondheim? The training of the Czech team seems to be geared towards having high speed and concentration at the end of the trainings – often including a short technical course to be run at high speed at the end of the trainings – making them well prepared to fight for the medals in the end of a relay in Trondheim…

Below you find a short interview with Radek Novotny.

– How was the selection for WOC done?
– Brozkova, Jurenikova, Smola, Dlabaja and Prochazka were pre-selected for some of the WOC races. However, they had to fight for the selection at other distances together with the other interested athletes at the selection races, which were held in Trondheim between 22nd and 25th of june. After these races, the team was set-up – the selection was based mainly on the selection races results. (The winners of middle and long were granted a place.) The runners were not selected to the team, but directly to particular distances.

– How has the road towards WOC been for the Czech Team?
– After having ignored Norway for many years, we came back for the WC in Oslo in june 2009. From there we went for a training camp to Trondheim to taste the terrains and disclose the most challenging features for us continentals. Then yet one week for the core runners in the autumn 2009 as well as some theoretical exercises during a winter time. Spring training camp, unfortunately moved to Halden because of snow. Then our selection races in Trondheim, and now we are at Gjenvollhytta again for a week of our final camp. There is one exception in our team – Vendula´s become a half Norwegian, so that we, after all, had a certain connection to norwegian orienteering from the very beginning.

– How is the current training camp is doing?
– We try to run as many model situations as possible, keeping a good speed at the same time as we´re trying not to get completely burned from the rough, power sucking terrains. To create a more competitive environment for this relatively small group of WOC runners we agreed on three common sessions with the danish team as well as we´ve invited also further czech runners selected for the World University Orienteering Champs to take part at the camp. Yesterday we had a relay simulation session with about 17 men and 17 women, which was nice (and effective indeed). Moreover, we stay at the hut in in the middle of the marches, getting more accustomed with Norwegian woods with every breath… ;)

– Your favourites to win gold medals in sprint, middle, long and relay for men/women?
– Honestly, I don´t have any favourites, as I already almost don´t remember the winners of all distances last year… Fortunately, there is plenty of very skilled and devoted canoons in o-world, so that the competition is definitely going to be exciting and we are granted ingenious runs from the gold medal winners. Some golds for Norway would be nice as it always helps the atmosphere of the champs, am I right, Petter?

Jan Kocbach is the founder of WorldofO.com - taking care of everything from site development to writing articles, photography and analysis.
@jankoc
Previous Road to WOC: Fjord-o Nordvestgaloppen 2010 (Maps)
Next Road to WOC: Russia (with maps)