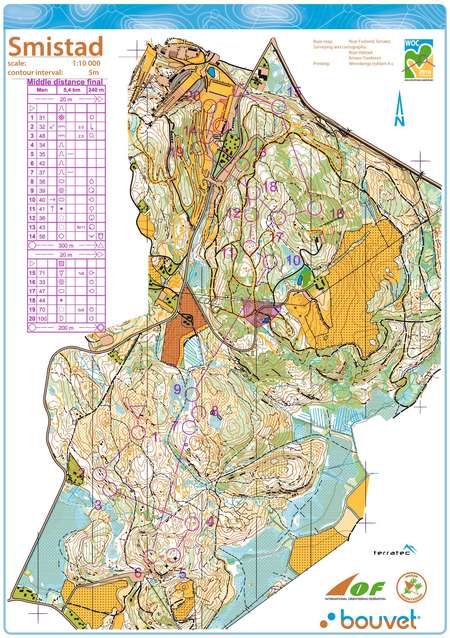 Very popular victories to Carl Waaler Kaas (NOR) and Minna Kauppi (FIN) in today’s middle distance at the World Champs in Trondheim.  While Kauppi had a clear victory, the mens class was tight all the way until the end – Kaas finishing only a few seconds ahead of Peter Öberg.

The ones following the GPS on the arena or on the web TV could observe how Waaler Kaas was 5 seconds behind Öberg at the top of the hill, but took second by second down the hill and into the finish. There is no better way to show the excitement in orienteering – not even with a mass start race.

Below routechoices of the top runners in the mens class along with split times are shown. Note that the split times might not be 100% correct (official split times not published as of writing this) – it will be updated if I notice any errors – so the short analysis below is therefore also not conclusive. Updated with new figures.

The first route shown is the leg from number 3 to number 4. Here it looks like Gueorgiou lost a bit on his longer route to the right – whereas the other medalists were nearly equal.

The second route shown is the leg from number 6 to number 7. Most approach the control from the left side where the hill is less steep, but Carl Waaler Kaas takes a more direct approach up the steep hill. The ones loosing on this leg are Gueorgiou and Novikov who run in an S-shape.

From 9 to 10 most go left, but Gueorgiou runs more along the road to the right. No big differences in split times among the best, except for Novikov who earns 15 seconds by running speed.

Below the routes of the best women on the longer legs in the WOC 2010 middle distance are shown. There were quite a few different routechoices, and already to the 4th control Marianne Andersen looses more than a minute. From control 4-5, Fincke takes a long routechoice around to the right which costs here more than a minute to the best – all of the other top runners take variants to the left. The last long leg is 7-8 – here all the top women choose to go left – only Jansson has a more direct approach at the start of the leg, loosing around 50 seconds on this leg.

Statements of the medalists

Below you find statements from the medalists – unedited from the press conference just after the race.

Minna Kauppi:
– My race was really good. Just some small mistakes. This was something I was really after in this world champs
– I was a bit mad before this competition. This was not what I had expected.
– Because of the little fever I have had, I was not really disappointed. I knew that I could fix it today.
– After the sprint, I was slightly ill with some fever for two days.
– I think Simone has taken all gold medals twice, so I think she didn’t need a third.
– The first gold medal was quite weird because I won together with Heli with the same time. I was confused, but it was still special.
– The second time I was too proud of myself.
– Today it was just winning myself to show that I am not such a loosehead – that I could win on my own.
– I think we will fight really hard for the gold tomorrow, but it will be tight

Simone Niggli:
– I am not sad that I can not take all gold medals. A silver medal is also very good.
– I think I lost it on the way to the 15th control. You have to be concentrated all of the way, and I lost concentration for one control
– It was on the top of the hill, so perhaps I lost concentration because I pushed too hard physically
– I think we have a strong team, but I think it will be very tough against the Scandinavian teams. We will fight for the medals.
– For me it is the second silver medal (she has 17 gold medals), so it is also something special.

Marianne Andersen:
– I am very happy that I got three medals, but I am not very happy with my race today. If I was the one giving out medals, I would not have given me a medal today.
– I started well, but then I thought this was not fast enough. Then I increased my speed, and could not orienteer well.
– Perhaps I wanted too much to run a perfect race today.
– All of the Norwegian team is very ready for tomorrow.
– Everyone is just talking about the gold medal. I myself just want to run good races, and the results will show what it is worth afterwards.

Carl Waaler Kaas:
– It was almost a 100% race. Just as planned. Tried to stay focused all the race, and I think I managed very well. I felt I struggled a little on some longer legs, but I think I managed very well.
– About three weeks ago I twisted my ankle very bad. I was afraid it was broken, so I was afraid I would loose all of the championships. I could run after one week, and I understood that I could get into top shape for the championships.
– After the qualification, I felt very secure. But yesterday I got very nervous, and had problems falling asleep. This morning I was much, much calmer.
– It is just an amazing feeling. Three years ago I was so tired that my body could not absorb training. It has been going better an better, and now it is really a dream which has gone through.
– From the second last control to the finish I knew I was in the fight for a good position, but I had no idea how good it was. I knew where to go to the last control
– I nearly didn’t realize I won after crossing the line. I had to
– Petter (Thoresen) told us “If you couldn’t smile at the start, you wouldn’t have a chance.” So I had to smile. I knew that this would be a really amazing race.

Petter Öberg:
– I am very happy with my performance, and I am very happy with a medal.
– I have been aiming for this race for a long time, and am very happy it went well.
– The race was really good. Maybe I could find a few places were I could have made it better. But it was really good. The training has been well, and everything has been good in the preparations.
– Fromt the GPS replay when Carl was live, I saw that I had maybe 5 seconds on the top of the hill, then I hesitated, and Carl was simply faster than me down the ski tracks.
– I heard it was the first time we got a Swedish medal on the middle distance, so it was a good day.

Thierry Gueorgiou:
– I just feel as disappointed as after the long. Of course, after winning 6 times the gold on the middle distance, it is a disappointment with a bronze.
– I did some not so good routes, and some mistakes at the controls. I think I could have won, but I did too many mistakes, and it was not good enough.
– I knew I had to run just perfect as the last time to win, and did not manage.
– I was disappointed by the course and the terrain. I think it has been the worst terrain I have been in in since I have been on training camps in Trondheim. You have to
– Next year it will be much for challenging for sure. Then I will be back.
– It was of course very important to succeed in Trondheim, but I have had WOC in France in my head for 2-3 years, and it is not so easy to have two things in the head at once.

Daniel Hubmann:
– I am really happy that I managed to win a medal today.
– I think my shape is good, but the terrain is of course different than the two last championships. I am not sure if it is because of the terrain or because of my shape.
– Two years until the World Champs in Switzerlands. That is one of my big goals. But now we are here in Trondheim, and will concentrate on the relay.
– We have a good relay team, but I also think that we are not one of the favorite teams. It will be a hard fight for the medals.
– I am not surprised that Carl Waaler Kaas is the World Champion. He won a World Cup race earlier, and was for sure one of the favorites. 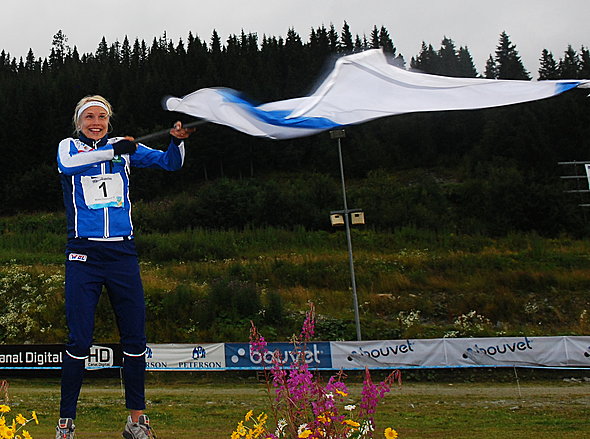 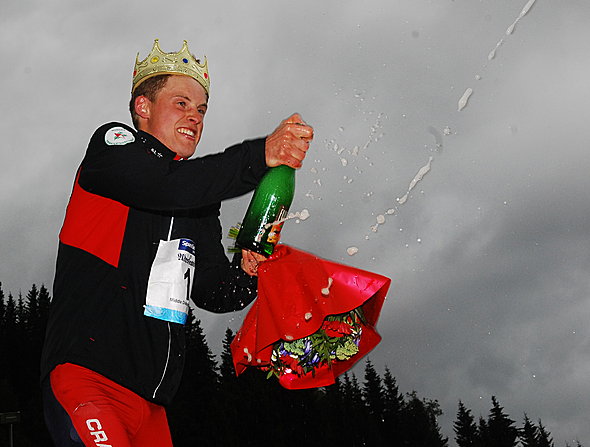 Jan Kocbach is the founder of WorldofO.com - taking care of everything from site development to writing articles, photography and analysis.
@jankoc
Previous WOC Middle Live from 12.40: Favorites and Background
Next WOC Middle Final: Grouping analysis