Today Route to Christmas takes another big step forward by introducing GPS analysis of today’s route – including a pace map and a calculation of the optimum route based on the GPS data. On top of that, the leg is also a nice one for you: A very long one from the Swedish Elitserien event of May 15th this year. 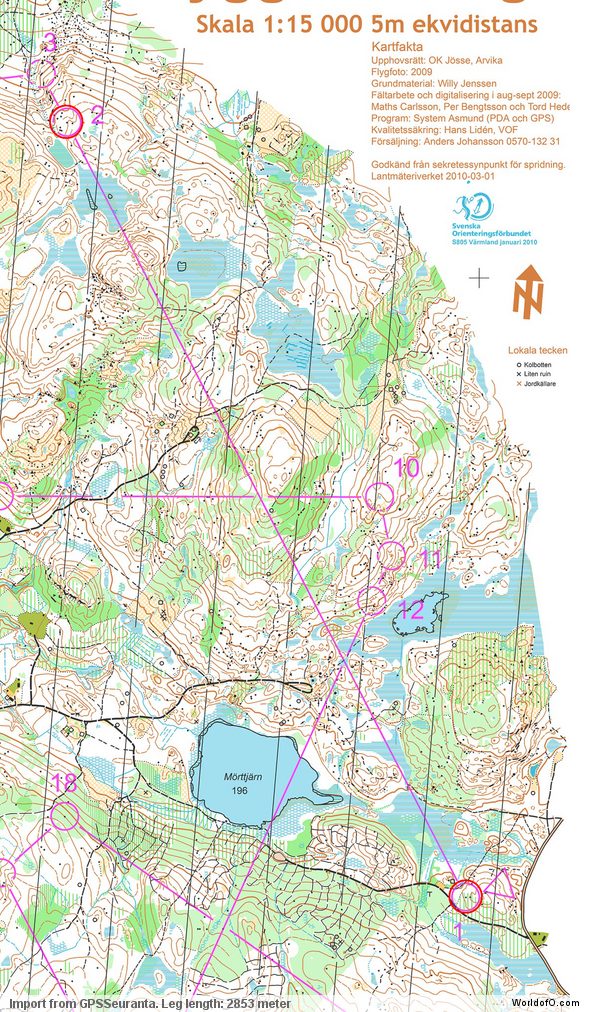 Then over to an analysis of the leg. With full GPS data of 20 runners instead of only Routegadget-data, it is possible to say a lot more about what is the best route than in the previous editions of Route to Christmas. The leg is maybe not the most interesting one as there are several routes which are approximately the same time, but still the following analysis gives some interesting information – and also shows how it is possible to analyze a leg using GPS data. 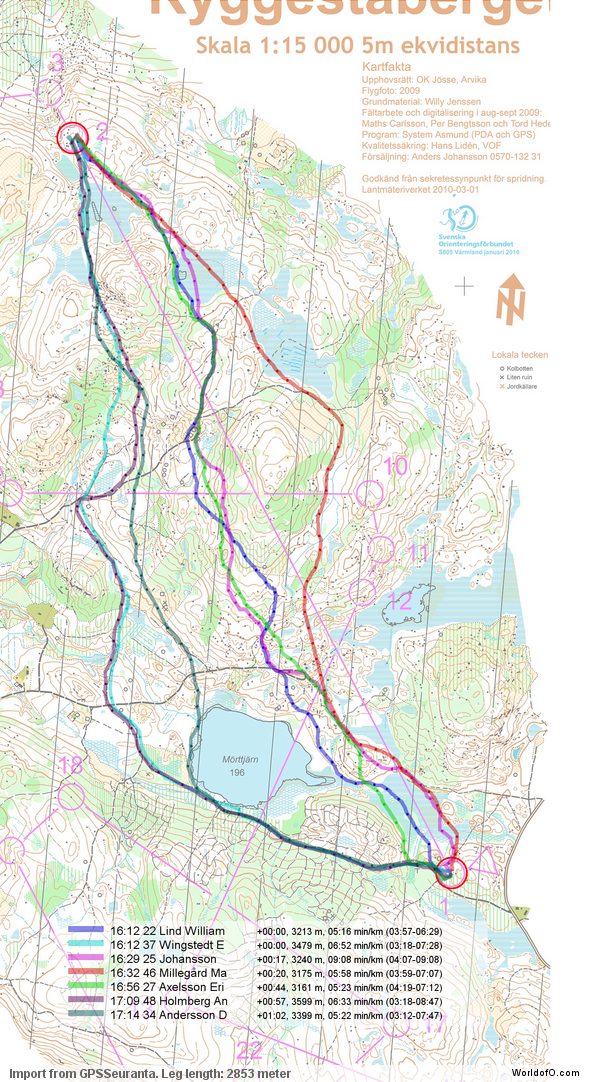 To get a better overview of all the possible choices for this leg – and how they relate to each other, we can plot each route with a color corresponding to the total time used for the leg (green is fast, red is slow). As you can see, there are a few green routes direct, a few left and one right. There slower options are also quite evenly distributed – with a few more on the left.

The next illustration is an interesting one. This illustration shows the minimum pace (in minutes/kilometers = maximum speed) for any given area on the leg on which one or more runners have been during the leg. Thus, if one runner has run in 5:00 min/km and another one on 6:00 min/km in an area, the area is given a color corresponding to 5:00 min/km. Thus all the green areas are the areas with good runnability and the red areas the ones with bad runnability. Following the left route along the left edge of the lake, you can see how the running speed is slower (towards yellow) at the south-west edge of the lake where the path is smaller and running through a marsh. One can also see how the speed is reduced in the light green / stony areas towards the end of the leg – and also the lower speed in the marshes. 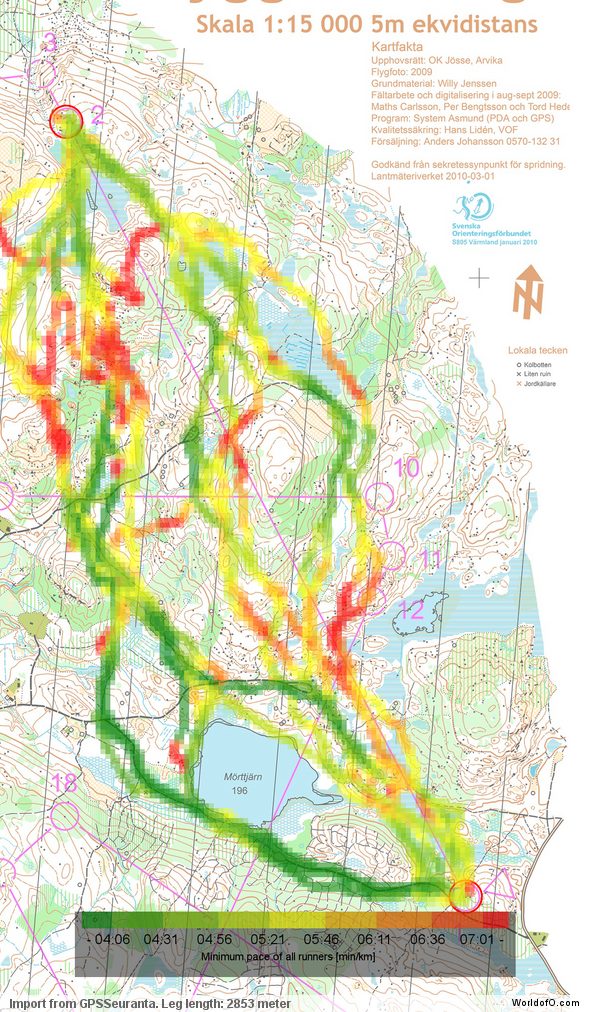 The algorithm for calculation of the optimal route (see more details below for the technically interested) gives some other interesting information: The fastest route to any point on the map which is reachable based on the speed information from the GPS data – and also the (relative) time it takes to get there. Thus, it is possible to make an illustration which gives information about why the optimal route is the optimal route. The illustration below is one way of displaying this information (please add a comment if you have a better idea – I have been trying many alternatives already and found that this was the best option so far). In this illustration, the starting point is set at the first control. Each position on the map is now colored based on how long it takes to reach it from the first control. Thus, all spots which it takes the same time to reach have the same color. Getting from the start to any of the dark red bands takes the same time. Correspondingly for the green, blue, yellow bands and so on. Note that the colors give the time it takes to get there, and says nothing about which way to get there. In addition to the color bands, the calculated optimal route is shown in black. 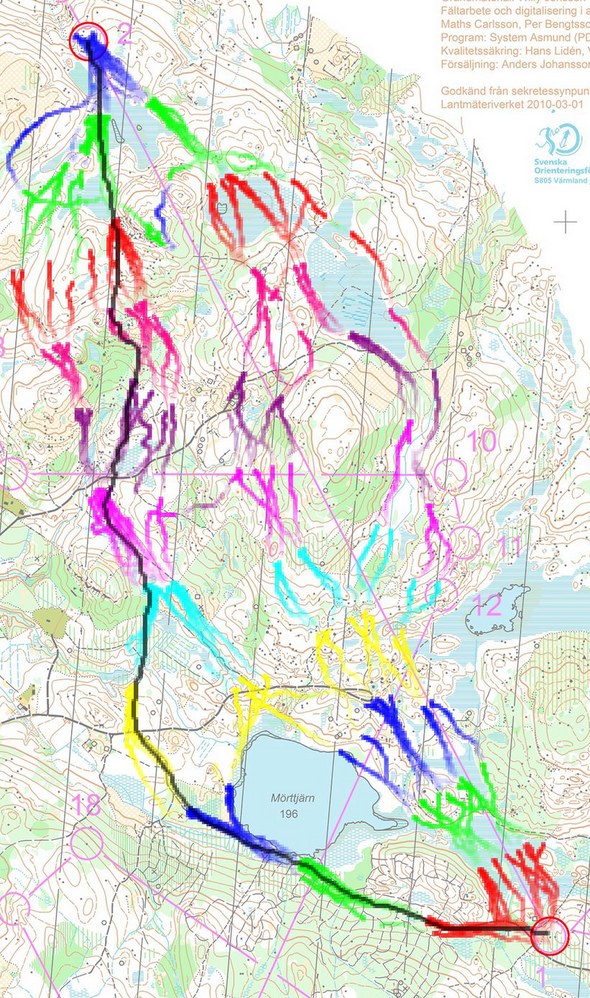 For some legs, this type of illustration can be used to find out where the control should have been placed in order to make another route be faster – this will be exemplified in a later edition of Route to Christmas. It can also be used to get an understanding about the dynamics of a leg – i.e. the difference between the different route choice options.

A little bit of technical background about how there illustrations are made – more will come later on:

There are probably not many of you reading all the way down here – but if you have come all the way down here, I would appreciate a comment about the usefulness of this kind of analysis! I have now got a setup which makes it possible to make these kind of analysis for hundreds of events with very little manual work – making it very interesting to explore this further!

The ‘Route to Christmas’ series at World of O was very popular the last years – and I’ve therefore decided to continue the series this Christmas as well. If you have got any good legs in RouteGadget from 2010-competitions – or old forgotten ones which are still interesting – please email me the link at Jan@Kocbach.net, and I’ll include it in Route to Christmas if it looks good. Route to Christmas will not be interesting if YOU don’t contribute.