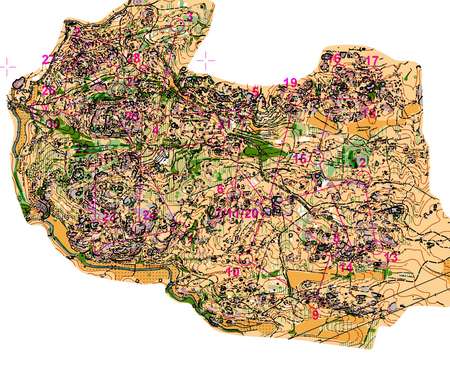 – Very good map, with details in the right places. And always great to race in Portugal, were the words of Thierry Gueorgiou after winning the season opening at the I Meeting de Orientação de Gouveia in Portugal today. Gueorgiou won with nearly 2:30 down to reigning World Champion on the long distance – Olav Lundanes. Philippe Adamski finished third – nearly 6 minutes down from Gueorgiou

Of course not much can be read out of the results, as the runners are all in the middle of a though training period. Thierry Gueorgiou has traditionally focused quite hard on some of the “winter training camp races” – winning by quite a big margin. Last year Gueorgiou won Portugal O-meeting and Gueorgiou still has the highest scored World Ranking points ever from his victory in Portugal O-meeting 2007. Olav Lundanes has traditionally not had that much focus on winning this type of races. However, Gueorgiou shows that he is still the one to beat – just like I am sure he intended…

The terrain was a very technical one – open but stony – giving a lot of challenges to the runners. – Some Portuguese runners gave us the feedback that there were too many details on the map and that it was difficult to read. The international stars had no problems and told us that the maps was really good, Miguel Reis e Silva reports from the arena.

A lot of orienteers from the Scandinavian countries and other countries in which temperatures are below the freezing point are escaping down to Portugal, Spain, Turkey and Italy in the winter months. The ones in Portugal today got just what they came for. – There was a really good weather today, 20ºc, and all the runners are still here enjoying the sun, Silva comments.

February and March is training camp time in the warm&sunny countries. Below are some maps found on omaps.worldofo.com by various runners from training camps the last weeks and months. This weekend marks the start of the training camp period for many – expect a lot more maps posted the coming weeks.

Have you got more map samples from training camps in warm&sunny countries lately? Add a comment below and share with the community.

Thanks a lot to the organizers/Miguel Reis e Silva for providing map and results from a poor internet connection in the arena.

Jan Kocbach is the founder of WorldofO.com - taking care of everything from site development to writing articles, photography and analysis.
@jankoc
Previous News from IOF about WOC in the future
Next Comment: Is mass start the future for orienteering in WOC?