Home / Orienteering News / Comment: Is mass start the future for orienteering in WOC?

Comment: Is mass start the future for orienteering in WOC? 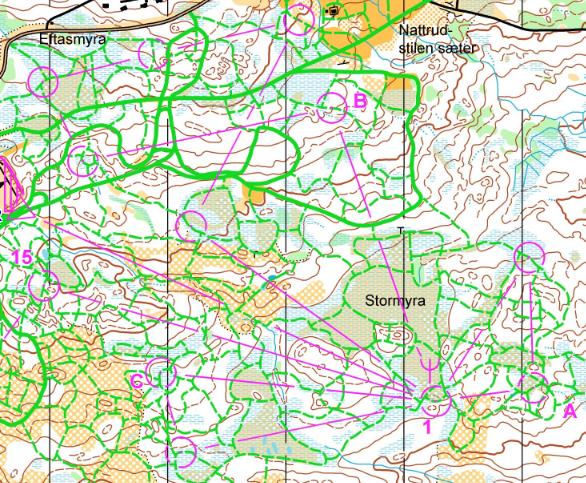 Do we currently have a way to make mass start interesting for spectators and TV viewers? Watching the mass start in the European Championships (EOC) in Ski-orienteering on Saturday got me thinking about the topic, as it is well known that there is ongoing work in the “WOC in the future” work group in order to determine if mass start will be on the World Championships (WOC) program for foot-orienteering in the future.

The  basis for working on including mass start in the WOC of the future can be found in the following formulation from the “WOC in the future” report presented by the IOF Council to the 2010 IOF General Assembly (direct quotes from the report):

Individual start competitions need to be complemented with formats such as chase and mass starts where first-to-finish is the winner. Such development will introduce new challenges to a traditional concept and address the ambition to further raise the spectator and media values of WOC. […] Events need to become even more attractive to follow, both live at the arena and through TV and web-cast media. To achieve this, events need to be made easier to understand and appreciated and more exciting to watch.

How would you make a mass start event in orienteering interesting to watch for spectators in the arena or for a TV audience?

Keep this in mind while reading the rest of this comment. In addition to the Council’s report, the General Assembly agenda also included another item relating to the future WOC programme, namely Norway’s proposal to introduce a mass start – and this proposal was decided for. Apologies for the long article – please skip directly to the discussion if you only want my conclusions – or even all the way down to the poll at the bottom of the page.

Note! These are my personal thoughts about the matter – and I am very much open for input and discussion. I would be grateful for any input – please come up with a good spreading principle for mass start and enlighten me! How would you make a mass start event in orienteering interesting to watch for spectators in the arena or for a TV audience? Note also that one option as to how to introduce a mass start is through a knock-out sprint which is not further discussed in this comment.

In Ski-orienteering, mass start has already been part of the regular WOC and EOC program for some years. Thus it was with great interest I sat down on Saturday to watch the live coverage from the EOC ski-o mass start. Maybe there is something to learn from the experiences in ski-orienteering? How does the spreading work? Is it interesting to watch? As I don’t know the sport as well as foot-orienteering, I thought I’d see it a bit more from the outside.

The live coverage from the EOC was great for a ski-orienteering event – GPS-tracking, video feed, live results and LiveBlog. According to the statistics there were between 500 and 700 unique viewers on the video feed each of Saturday and Sunday – and around 1400 TV hours watched in total. The video feed did only have cameras at the finish to go along with GPS tracking and results boards + speaker sound, but although more cameras would have made the broadcast better, I don’t think it would have changed my overall impressions regarding the mass start concept chosen.

Women: Nothing for 30 minutes

The mass start event at the EOC ski-o was a middle distance event (at WOC ski-o the mass start is at the long distance event). For the women that means a winning time of around 40 minutes. The course layout was as follows (see GPS-tracking here – see also map showing the three-winged butterfly above):

I tried to follow the GPS-tracking closely in order to understand who was in the lead, but for me it was impossible to find out the standings until the end of the three-winged butterfly. The commentator didn’t even try to figure out who was in the lead either as far as I could hear, so we both (along with all other spectators) watched for the first 30 minutes of the 40 minute race without knowing anything about the outcome. Then, after 30 minutes of “mystery”, 2 competitors – Tatyana Kozlova and Marthe Renaas – emerged together with a lead of about 40 seconds – ready for 4 common controls towards the finish. Luckily for the competition, there was some excitement around the second last control as Kozlova made a mistake. Finally Renaas took a relatively clear victory.

Men: Better – but still not what we are aiming for? 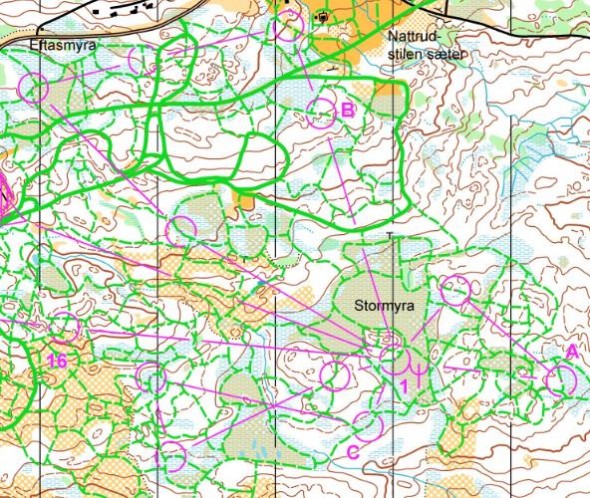 The men’s course was a bit longer (see GPS tracking part 1 and part 2) – with a winning time of around 48 minutes. A similar course layout to the women in the start, but then an extra loop in the end:

For the men there was thus around 24 minutes of “mystery time” in which it was impossible to know who was in the lead. Then Staffan Tunis emerged first after the three-winged butterfly with Erik Rost not far behind. Unfortunately I left the ski-orienteering for another TV-channel (cross country skiing) during the final parts of this “mystery time” as it was quite frustrating to watch without knowing anything. That is a pity, because by watching the GPS-tracking and the LiveBlog afterwards I saw that the rest had indeed been quite exciting. Rost chased Tunis towards the next butterfly – taking different route choices – and coming a little bit closer. Then they (fortunately) had the same forking in the butterfly, and Rost finally managed to catch up with Tunis towards the end of the race. In the end Rost was a few seconds faster, beating Tunis in the very last part.

– This was really exciting, was the comment from Anatolijs following the LiveBlog just after Tunis had taken the gold medal – so there is no doubt mass start has potential. 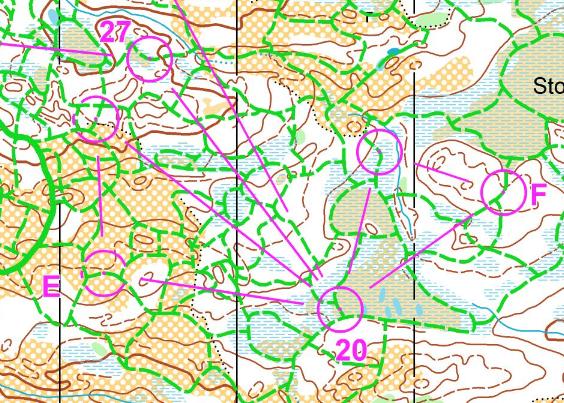 Looking back at the GPS tracking now, I see that if this would have been a full TV broadcast with a good job done by a TV director, it would actually have been possible to make an “acceptable” 45 minute broadcast out of it:

I think it could actually have been made a quite good TV broadcast with the proper resources ( = many cameras = high cost) available. However, my problem with this TV broadcast is that we don’t see the competitors in the parts of the course were a lot of the decisions are bound to be made. Both in the men’s and the women’s course we get into the broadcast when most of the big decisions are already made.

Is there any good spreading principle available for mass start today?

The period of “mystery time” kills all excitement

Of course, these courses were probably not geared towards making this a top experience for the spectators/TV audience – but rather towards making a fair competition for the competitors(?) – so we shouldn’t judge this type of spreading principle in a mass start race based on this race alone. However, I have watched quite a few events with GPS-tracking and mass start with spreading systems which are based on the similar principles as the EOC ski-o middle, and the conclusion has always been the same: The period of “mystery time” kills all excitement – and this period is usually from 15 minutes and upwards. The same goes for other races with mass start – I still can’t remember having seen one with a spreading principle which kept me in front of the screen for the “spreading part” of the broadcast.

I choose to divide the spreading principles into these categories (based on the extensive report and separating methods in orienteering and what I have seen):

Based on this list, you can see that I have yet to see a mass start with a spreading principle which (1) gives some kind of “fair” spreading and (2) at the same time makes it possible for the spectators to clearly follow the actual standings in large enough portions of the race. In addition, there is the problem with the number of cameras which probably will have to be higher in a mass start than in an individual race.

So, what is my conclusion? And why am I writing this (too long) comment? My main conclusion is that before a decision is made to include a mass start event in the World Championships program, one has to make sure that one has a spreading system which works for both TV and for the competitors. Putting mass start on the WOC program and “hoping” that the issue with an appropriate spreading system will be solved before 2014 would in my opinion be a big mistake – it could lead to a race like we saw in EOC ski-o middle on Saturday. A decision to put mass start on the WOC program must in my opinion be accompanied by a decision on a preferred spreading method. This “mass start concept” must be fully defined as a TV concept – including spreading method. And I also think such a concept must be tested in competitions with elite start field and TV coverage before such a choice is made.

Now, you can of course say that you are happy with the concept used on EOC ski-o middle. As I wrote, I think it would have been possible to make an OK 45 minute TV broadcast out of it. Or alternatively you can say that any of the other existing spreading principles which exist today are perfect for orienteering with mass start on TV.

However, then that kind of spreading concept shall be the basis of the decision to include mass start on the WOC program – and not the “hope” that some better method is developed before 2014. That’s my point!

PS! You can also say – which I am sure many will – that today’s WOC program is fine and you don’t want any changes. My comment is, however, written on the basis that IOF (and implicitly also the majority of the member countries) has decided that there will be change – my focus here is on not making the wrong changes.

Some random thoughts after 1 AM

Requirements for spreading are not that severe for chasing start

To finish of this comment – some random thoughts related to the topic:

Poll – what is your opinion

Jan Kocbach is the founder of WorldofO.com - taking care of everything from site development to writing articles, photography and analysis.
@jankoc
Previous Season opening Portugal: Gueorgiou ahead of Lundanes, Adamski
Next Testing: New mobile version for iPhone/iPad/Android