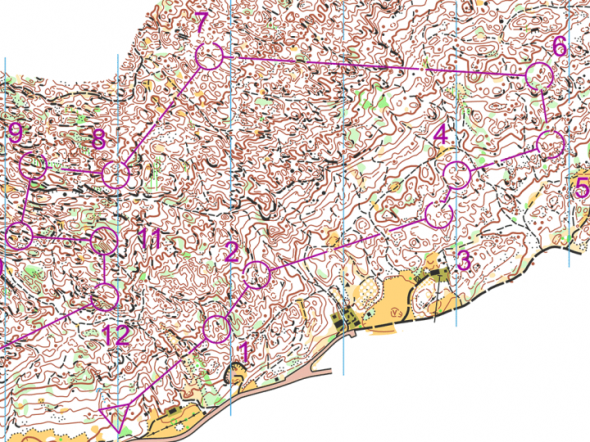 … a very technical course which gave the runners a lot of interesting challenges. Read the interview with the course setters and see four different versions of the courses – from the early version to the final version.

Course setters Tip: Don’t forget to offer the most pleasure to the runners.

The fight for the victory in “Course of the Year 2011″ was very tight – just a few hours before the voting closed at midnight there were only 10 points between the two top placed courses – the third stage of Swiss O-Week and the WOC middle final.

The last hours the WOC middle final in France increased the lead to a “comfortable” 810 points victory. Congratulations to the course setters Benoît and Elodie Cochey! Last year the Course of the Year 2010 – Jukola – won with more than double the points of number two – a much closer race this year. PS! Today’s Route to Christmas is from WOC Middle – check it out here.

Last year there were three tough long distance races in top of “Course of the Year 2010″ – this year we have several different formats; a middle distance on top, a long distance in second spot, a long street orienteering race in third, a sprint race in fourth and a tough, Scandinavian long distance in 5th. Congratulations to all course setters and courses.

As course setter of the year, Benoît and Elodie Cochey were allowed to choose among the sponsor prizes offered. They choose OOCup 2011 – in terrain which has many of the same characteristics as the terrain in which they set their winning course. The winners of the “Lucky voters” will be presented tomorrow.

Below follows an interview with the course setters of WOC Middle distance. Some interesting links:

– When did you start planning the courses for WOC 2011 – and how many hours do you think you spent on it?

We have made lot of versions because of the area changing, in particular a version we loved very much!

We were offered to be in the team of course setters in 2009. It was just after the french Championship in Burgundy. We made a good job with Bruno Haberkorn on the Middle Distance. It was the same program : qualifications and finals but for more categories and levels than in La Feclaz.

The real work began in May 2010 with the first contact with the terrain and the firsts drawings of the map. The most difficult was to choose the area of each form of competitions. A hard work realized by Jean-Daniel Giroux and Bruno Haberkorn. We have made lot of versions because of the area changing, in particular a version we loved very much! We spent a lot of weekends in La Feclaz. It was quite difficult because Elodie was pregnant but our children saw all the precontrols! How many hours? Good question. We didn’t make the addition. It was a huge work!!

– Did you have to do many compromises due to spectators, TV and other items?

In the beginning the race start had to be on the finish line with a crossing in the arena before the lasts controls.

After adjusting the problem of the area for the different forms of race, we had constraints with the arena crossing and TV organization. In the beginning the race start had to be on the finish line with a crossing in the arena before the lasts controls. But it was to complicate and not very pleasant for the runners.

The start line had a very big constraint for the TV. It was impossible to put the start too far of the arena (1km for the cable). We tried to think about good positions of controls to have interesting pictures for the photograph and TV. That’s why some controls looked a little bit too easy …

– What is your favourite leg in the course – and why?
What a hard question ! It’s easier to say what we don’t love : the race after the control 14, which was more explained by different constraints (arena, TV, spectacle…). Otherwise we love all the rest of the race : fast start with very beautiful forest and then the return with tricky controls where the runners need to change their paces.

– Have you got the possibility to share earlier variants of the course – to show how the course developed?

4 versions attached but we have problems with the background map of the V1.

[Editors comment: Below all four versions are included. To better be able to compare with the final course, I have drawn the (approximate) course over the final course so you can see the differences. Note that control positions are approximate as there were some differences in the maps. Original files as received from Cochey are also included below.]

Version 1 (not compared to final course as mostly in the WOC relay area): 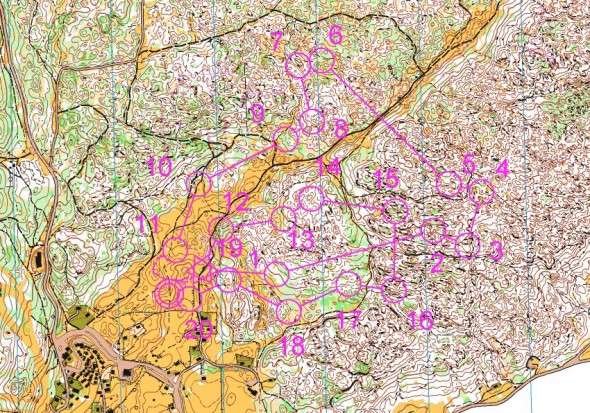 – What is the best course you have planned?

The Woc final !! The WOC was the highlights of our course setters career !! For the moment of course. We are young and we have many years in front of us !

– What is your work flow as a course setter? How do you start?
The last year we have set a lot of important races. In parallel we made each year a regional race and some trainings for our club.
The beginning is very basic : Some trainings for our club in first. Some local race after. In 2009 the French middle championship and in 2010 a national event in Burgundy.

– What is your best tip for setting a good course?
Respect the spirit of each race format. Long is not the same thing as a Middle and as a sprint! Don’t forget to make for changing pace. Have a good knowledge of the terrain. And don’t forget to offer the most pleasure to the runners.

– What was the best course you run in 2011 – and why?
We didn’t run a lot of courses this years because we have a little girl born in 2009 and a litlle boy born autumn 2010. So it’s very complicated to train and make competitions. But the Nationale in Fontainebleau was very nice.

But currently, our better performance is to change nappies and to learn how to read an orienteering map to our children !

For the record: All sponsor gifts/income related to “The Best Course of 2011″ goes directly to the WorldofO.com readers.