The fifth day of Route to Christmas 2012 takes us to Sweden again – to a very interesting long leg in a middle distance course. Todays leg is leg number 12 in the H21E course from the Silva League WRE-race at April 15th.

PS! I hope to soon get enough tips from World of O’s readers to get out of Scandinavia and into the rest of the exciting orienteering world (remember that most of the top courses in Course of the Year were from outside Scandinavia)! I have some, but need more! Both RouteGadget and 3DRerun works well! Unfortunately there is very little GPS-data available from many of the most interesting non-Scandinavian events, as they have been run as World Ranking Events, for which GPS-watches are banned… 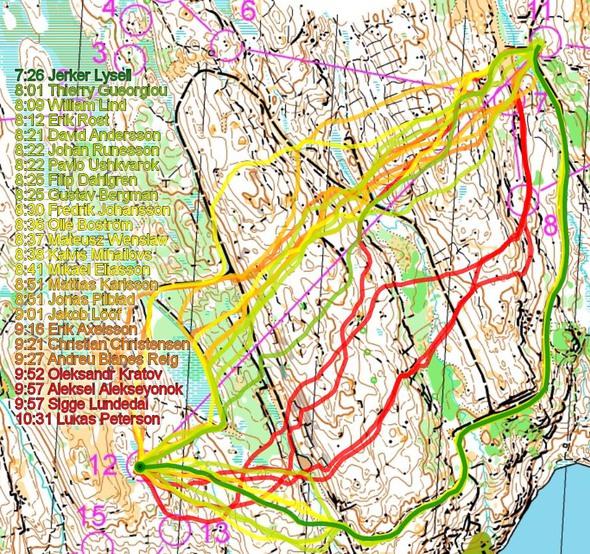 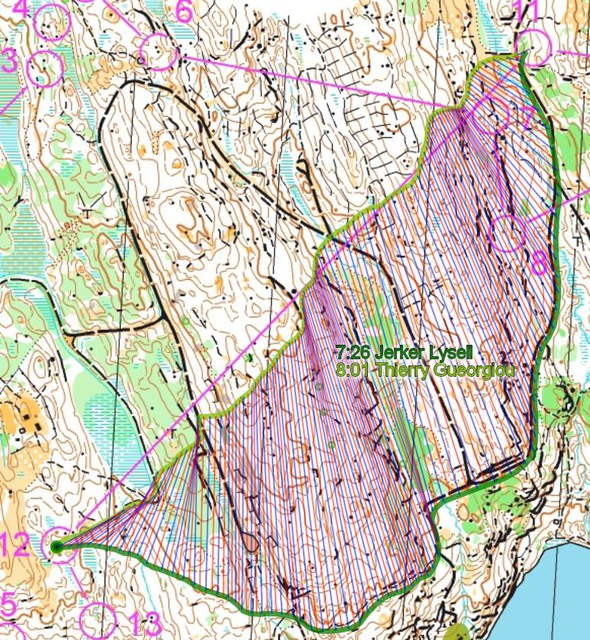 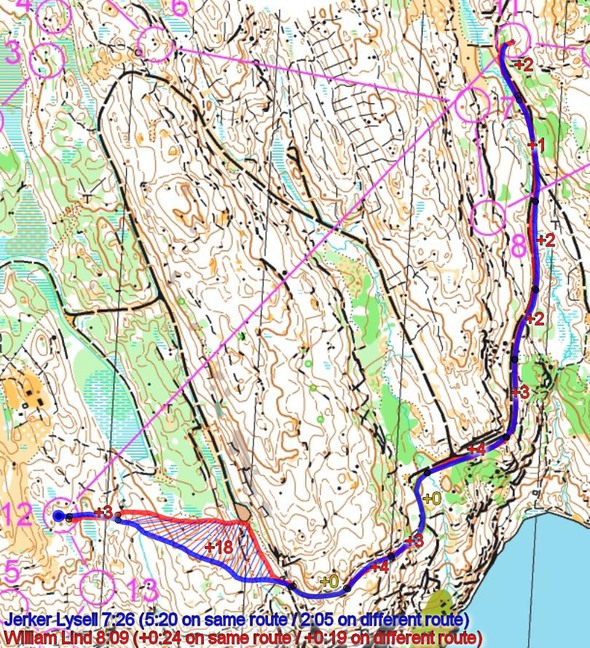 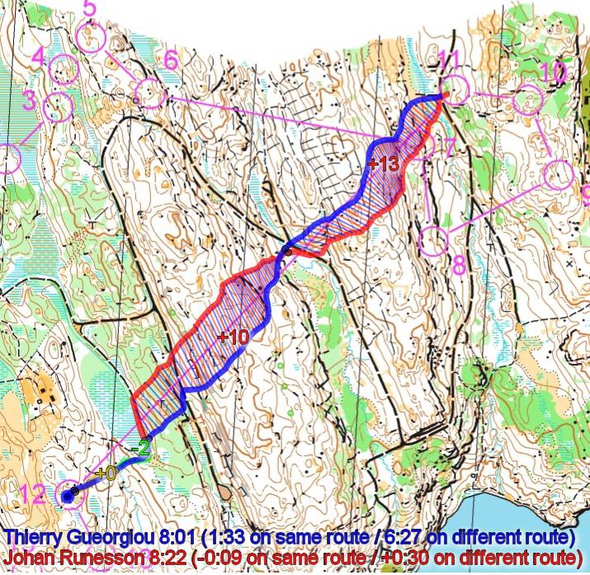 Jerker Lysell was in exceptional shape early this spring – and one of the most impressive legs he run was probably this long leg in the middle distance in Silva League at April 15th. Lysell was 35 seconds faster than the second fastest on this leg – and that was none other than Thierry Gueorgiou. Had Lysell been an additional second faster, he would have been the winner of the race along with Gueorgiou – now the Swedish sprint specialist had to leave for the day as number two on the list.

Looking at the leg, there were two main options: Direct for technical orienteers like Gueorgiou, Bergman and Runesson or around for fast runners like Lysell and Lind. Of the five fastest times run on this leg, four run around. If Lysell is taken out of the equation and a few more runners are included, the picture gets less clear. This is a typical leg where different runner types should choose a different route – and it is also exactly what we see. That said, the risk being lower around – it is probably the route choice to advice for the majority of runners…?

Taking the analysis further, we can take a look at where Lysell beats the others on the road. The graph above is a pace graph, showing the average pace for each 10 second segment along the route of Lysell (green) and the second fastest on this route, William Lind (red). By careful study, it is possible to see that Lysell gains most of his time in three places – accelerating faster the first 50-100 meters after reaching the big path, higher speed after reaching the top of each hill (up the hill Lind has approximately the same speed), and up the big hill in the middle of the leg. In addition, Lind has a poor routechoice (and gets tired) in the last part of the leg.

Looking at the direct route, the sitation is very similar for Gueorgiou compared to Johan Runesson and Gustav Bergman. Compared to Runesson, most time is gained around the top of the hills where Gueorgiou speeds up – it might seem like the Flying Frenchman manages to find areas around the hilltops were he can accelerate and keep higher speed than the others. Bergman is actually on par with Gueorgiou from the minute they reach the top of the first hill – it is the first part of the leg which is problematic for Bergman.

Jan Kocbach is the founder of WorldofO.com - taking care of everything from site development to writing articles, photography and analysis.
@jankoc
Previous Route to Christmas: Day 4 2012
Next WoO Christmas O-Quiz: Day 5 2012