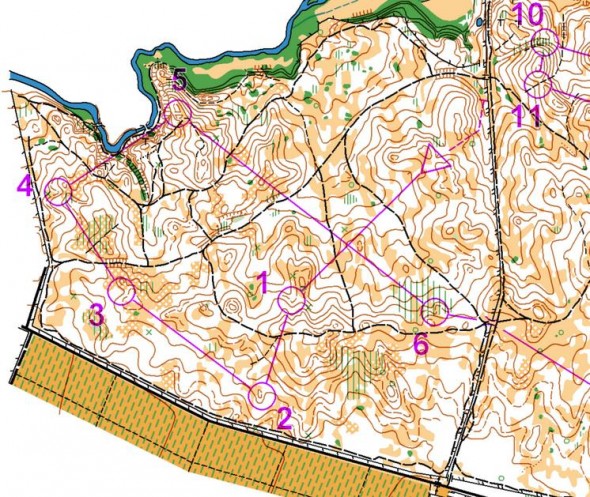 Signe Søes (Denmark) won the women’s race in her comeback – and Daniel Hubmann (Switzerland) got his revenge after the “bitter” 4th place in yesterday’s sprint. The terrain was fast and seemingly easy – but many runners did direction mistakes.

[Note! This article is based on unofficial results]

Signe Søes won her qualification heat in the voided Middle Qualification on Thursday – but had to start very early as the start list was based on the World Ranking list. From a very early start, Søes run a fantastic race – and already as she passed Radio 2 it was clear that this could very well be a medal race!

The only ones able to fight Søes in the first part of the course were Maja Alm (Denmark) , Tove Alexandersson (Sweden) , Ida Bobach (Denmark) and Helena Jansson (Sweden). Jansson and Bobach failed in the middle of the race – and thus the fight was only between Alm, Søes and Alexandersson.

Alexandersson looked very strong – having the highest speed – but her gold medal chances were crushed by several small mistakes on the control points and a few direction mistakes on the longer legs. In the end Alexandersson could not even beat Alm – and the day was Danish: Signe Søes the winner ahead of Maja Alm and Tove Alexandersson.

Signe Søes started early, and therefore did not run with a GPS from the organizer. However, knowing that Alm was 17 seconds behind Søes at the end, it was still possible to follow the excitement on the GPS. Below is an autOanalysis comparing Alm and Alexandersson (click to enlarge); Alexandersson’s route is in blue. Alm’s route is green where she is faster than Alexandersson, red where she is slower. It is evident that Alexandersson should have used some more time on her compass – loosing time on all of the longer legs when she didn’t keep the right direction.  However – there has to be an even bigger timelost after her GPS stopped working between control 16 and 17 – we’ll see that from the splits.

Hubmann goes Bulldozer – and earns time on that

In the men’s class three men showed from the start that they would be the strongest today: Daniel Hubmann, Fabian Hertner and Thierry Gueorgiou. Hubmann had slightly higher speed – and they all three had a though fight all the way to the finish. Below are GPS comparisons between Hubmann and Hertner/Gueorgiou. Hertner looses time on some micro route choices around 5 and 6 – where Hubmann is tough and goes direct. Also a similar situation to 18. Hubmann goes Bulldozer – and earns time on that.

Comparing Gueorgiou and Hubmann, they are quite even until the 9th control, but then Gueorgiou starts loosing some small seconds here and there. First to 10, then to 12, then to 16 and to 18. In the end it is not enough “finesse” from the French King of Middle distance in this rather easy terrain – but the WOC terrain in Italy should fit a lot better! 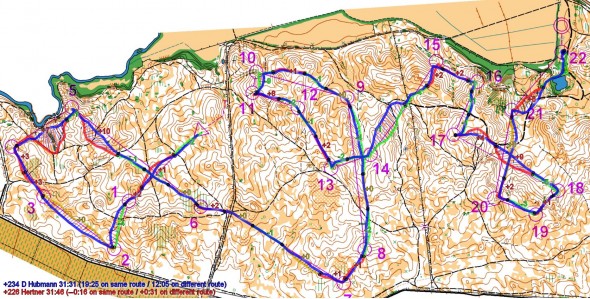 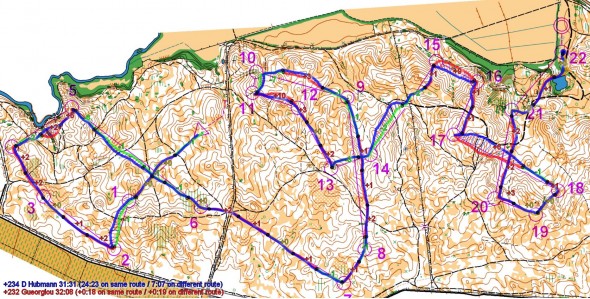 Note! These are unofficial results!

Jan Kocbach is the founder of WorldofO.com - taking care of everything from site development to writing articles, photography and analysis.
@jankoc
Previous EOC Sprint: Why did the winners win and the others loose?
Next EOC Long: Maps and Results