Home / Orienteering News / EOC Sprint: Why did the winners win and the others loose?

EOC Sprint: Why did the winners win and the others loose? 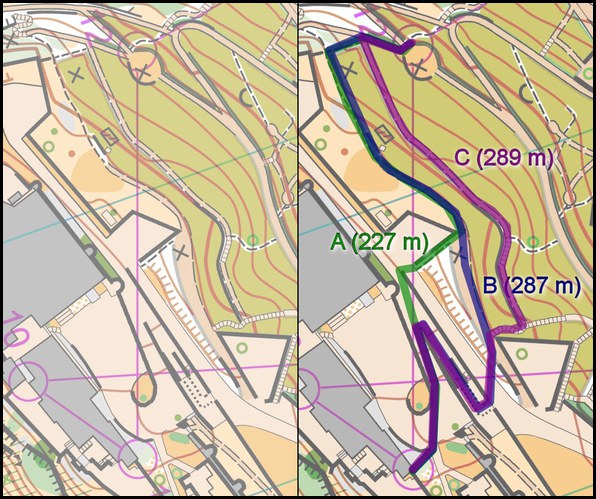 There is a lot more to the EOC 2014 Sprint course than these two legs – the SPAS analysis will tell a lot more – for now you can read in the analysis below why the winners won their medals and the others lost.

The men’s leg 11-12 is shown above (see the leg in SPAS) – and it looks quite innocent at first sight. It is fair though – as one can easily spot the fastest variant when looking at the map in a no-stress situation. However it might not be clear that variant A is a lot faster – the reason being that this variant is 60 meters shorter and with a lot less corners (you also avoid running in the narrow tunnel). Looking at the GPS-tracking, the 15 fastest runners on this leg with GPS-tracking took variant A. The fastest on variant B is Khramov who looses 12 seconds.  The fastest on variant C is Matthias Kyburz who looses 14 seconds to the best split time – and that is purely on a route choice mistake. Looking at the final results, Kyburz was only 13 seconds from gold.

Women 5-6: The opposite story 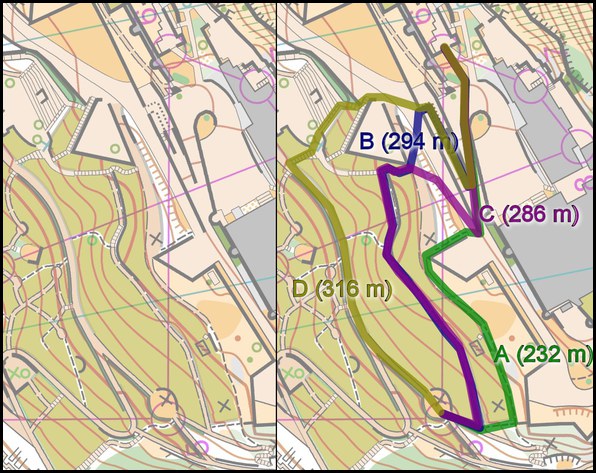 As you can see, the leg is very similar to the men’s leg (see the leg in SPAS) – just going in the opposite direction. Whereas the men had the advantage of already being through the tunnel on the way up to the castle, the area was completely new for the women who had to understand the tunnel area from the map (here is the tunnel in Google Maps Streetview, to get a feeling for the area).

Again, the green variant marked A is clearly the fastest. It is shorter – and has less corners. The fastest time on this leg is run by Ines Brodmann (1:32) – running variant A. The 8 fastest of the women who wore GPS-tracking took variant A – the fastest on variant B being Rahel Friedrich who lost 13 seconds. Gross also runs B and looses 15 seconds (15 seconds from silver, 17 seconds from gold in the end).

The Mens race – control by control

Søren Bobach had the best start, but lost the initiative on a bad route choice to number nine (zig-zagging with stairs on variant B in SPAS). After Bobach leaves the scene, Daniel Hubmann takes over for a short while, but the Swiss looses 12 seconds on the tough uphill leg up to the castle to number 10 (probably taking a wrong route choice – no GPS for Daniel Hubmann – although there are no real route choice alternatives on this leg) – and suddenly Hubmann is far down on the list.

From here Leandersson takes over the lead with a best time on leg 10 – and never gives the lead away. Behind Leandersson, Kris Jones and Frederic Tranchand come up in second spot after good runs up the hill (unfortunately Tranchand’s leg number 12 is a disaster as discussed above, sending him far down on the results list.).

Eventual bronze medalist Martin Hubmann has had a slow start, and is all the way down in 15th place at control number 10. To top this, Martin Hubmann is one of the few going into the course setters trap to control 11, running right (variant A in SPAS) – loosing 9 seconds on this short, easy leg.

Continuing on leg 12 (analyzed in detail above), Jones does not execute the leg perfectly (although he takes the correct route choice).   Instead Czech Vojtech Kral comes up in second spot – a position he fights for with Jones on the next few legs.

The 16th – and especially the 18th controls do however break Kral’s medal dreams. To 16 Kral runs left (Blue B in SPAS) – loosing 5 seconds – not even a real trap by the course setter. To 18 Kral runs left (Purple C in SPAS) and looses 8 second – again a leg which is too easy to be a real “trap”. And what about Jones? He does exactly the same mistake as Kral to number 18 – going around to the left instead of crossing the football field. 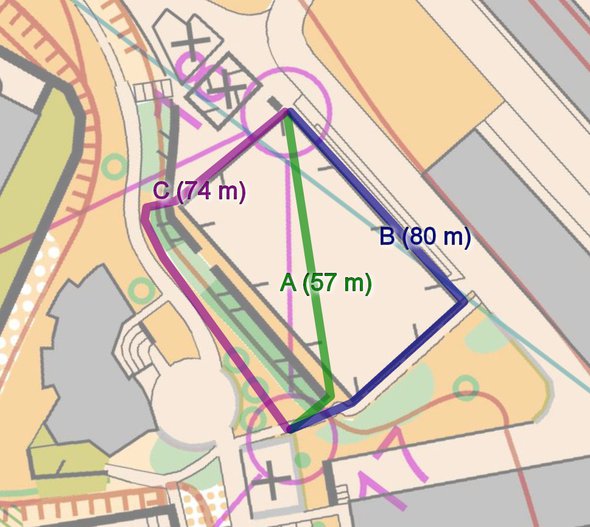 Instead Jerker Lysell comes up and takes the silver medal which is up for grabs. Lysell uses his high running capacity and runs very well on all the “uncomplicated” longer legs – especially 9, 10 and 14. Martin Hubmann rises through the field to third place by doing a mistake free race in the end – while other take wrong route choices on “easy legs”.

The Womens race – control by control

Judith Wyder takes the wrong route choice four(!) times in a row at the start of the race! E to number 1 (+ 9 seconds), B to number 2 (+ 6 seconds), E to number 3 (+ 18 seconds) and B to number 4 (+ 9 seconds) – two of these variants did I draw into SPAS only after seeing Wyder’s routes – I did not consider them as relevant route choices. From there on, Wyder looked like a completely different athlete: To number 5 she runs an incredible leg up towards the castle – winning the leg with 5 seconds. From there on Wyder is close to unbeatable – catching up with Nadiya Volynska’s time at control 15. 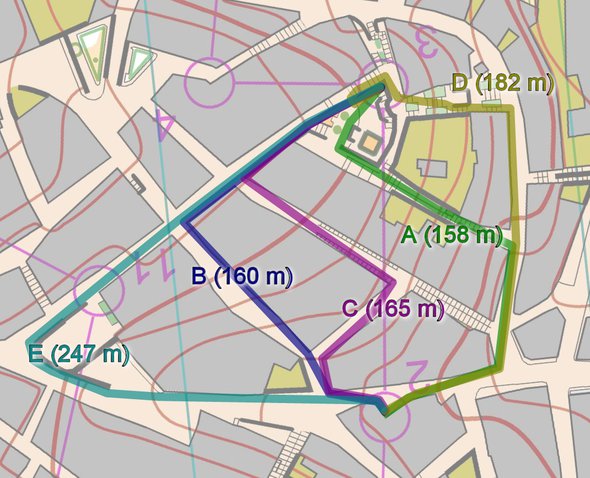 At the start of the race everything looked like this was Emma Klingenberg’s day. Where Wyder took the wrong choice each time – Klingenberg took the perfect choice. Klingenberg was 41(!) seconds ahead of Wyder at control number 4 – an incredible lead! And exactly like with Wyder, Klingenberg looked like a completely different athlete from here and on – maybe spurred by the big time loss on the route choice leg to number 6 discussed above.

When Klingenberg lost it at leg number 6, Nadiya Volynska took over the lead – the Ukrainian’s lead being at the maximum of 15 seconds at control 10. Volynska did not do any big mistakes from here and on – Wyder is just running a little bit faster.

Julia Gross runs a steady race without any mistakes

Rahel Friedrich is in bronze medal position for a long time – but looses that possibility on the very short leg to control 16 with a 12 second time loss (SPAS). This is not a route choice mistake – but a real control mistake; running to far and having to go back. Meanwhile Julia Gross runs a steady race without any mistakes except for the route choice mistake mentioned above – taking the bronze medal from Klingenberg and Friedrich – both who have had higher speed.