Grouping and following at “pre-WOC” races in Italy 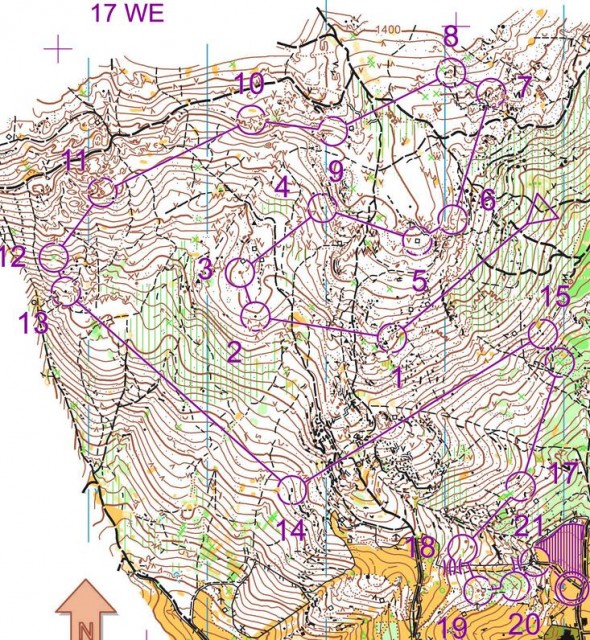 – If you look at the number of “controlpacks”, you can see that the average number of controls attacked alone for the women’s Top 10 is 4 controls (out of 20), Martin Lerjen of O-zeugs comments the women’s middle distance in the “pre-WOC” races in Italy this weekend.

This weekend “pre-WOC” races middle and long with very strong start fields were held in the Asiago area – as a test for the World Orienteering Championships (WOC) for the organizers. Lerjen has made an interesting analysis of the grouping/pack formation in the races which is included at the bottom of this article.

The start interval at the WOC in Italy this year will be 1.5 minutes for middle and 2 minutes for long – after the IOF granted the organizers a “rules deviation” as the IOF competition rules state 2/3 minutes start intervals (published in WOC Bulletin 3 in May). This WOC will also be the first without qualification races for long and middle – and therefore the start order will be based on the World Ranking (although in seeded groups and not strict World Ranking order) instead of the qualification results as has been the case previously.

The pre-WOC was in many ways similar to what will meet the athletes at WOC. The organizers tested the same start intervals both for middle (1.5 minutes) and long (2 minutes). The start list was ordered by World Ranking – with the best runners starting last (although strict World Ranking order).

Below the overall comment, Lerjen’s analysis is included. Some comments are added by WorldofO and marked accordingly. The middle distance is treated first as this showed the biggest problems in the “pre-WOC” races.

… puts very high pressure on both course setters, organizers and IOF representatives in order for them to prove that this decision is compatible with fairness

The kind of pack formation we saw in the pre-WOC races – especially in the women’s middle distance – can surely not be called fair, even if nearly all runners got the “benefit” of running in groups for significant parts of the course. Also, the forking in the men’s long distance race was not optimally formed – being set in a tricky area, late in the course, with sharp angles and equal wings. Hopefully the course setters, organizers and the IOF representatives have done their job in a good way at WOC in order to ensure fair competitions. Both course setting and terrain choice may improve the situation significantly (and I also expect it to do that). Still, decreasing the start interval from 2 minutes to 1.5 minutes at the middle distance and from 3 minutes to 2 minutes at the long distance puts very high pressure on both course setters, organizers and IOF representatives in order for them to prove that this decision is compatible with fairness in the most important competitions of the year within the sport.  It is impossible to say exactly how much better the situation would be with increased start interval, but it is certain that reducing the start interval will always increase the problem – and the chances that pack formation will influence Top 6 and even the medals increases.

So why is the start interval reduced when it potentially makes the competitions less fair? The reason is partly to reduce the overall time of the competitions (without qualification the start fields are 50% larger than last year). TV suitability also plays a role – especially maybe for the long distance. For the middle distance a 2 minute start interval should not pose significant problems, even with the planned TV slots.

Identified factors for formation and duration of packs

What are the identified factors in regard to the formation and durations of packs under orienteering competitions?

It is in the Middle Distances nature that all factors described above tend to favour pack formation. Many short, technical legs in demanding terrain. No real route choices, no separation methods. More or less the only measure left to reduce pack influence is the separation of the runners by a reasonable start interval. Instead a short one was chosen.*

In the present WRE we can see that the course, provoking mistakes in the control ring, especially with a demanding first control and a tricky 4th control [for the men] leads to the early formation of stable packs. It is to be expected that after your first mistake you will be broomed up by the runner starting behind you. Most of these stable packs build in the first half of the race after 10-15min. On the startlist there are some gaps, for example Jonne Lakanen and Roope Koskinen start in a 3min interval… 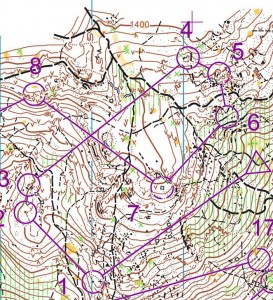 [About what to expect at WOC:] The distance characteristics make it pretty unlikely, that course setting outbalances the other factors. In contrary: It is supposed to be more technical, trickier and the choosen terrain is accordingly.

*Old idea: if a short interval is unavoidable, then folding the startfield would be remarkable solution. Take turns with the strongest and the weakest of the starting field…

[Comment WorldofO: At WOC the visibility might be poorer in parts, reducing pack formation. The course might also be set in a way which reduces pack formation – but many of the same characteristics as in this “pre-WOC” race will be present] 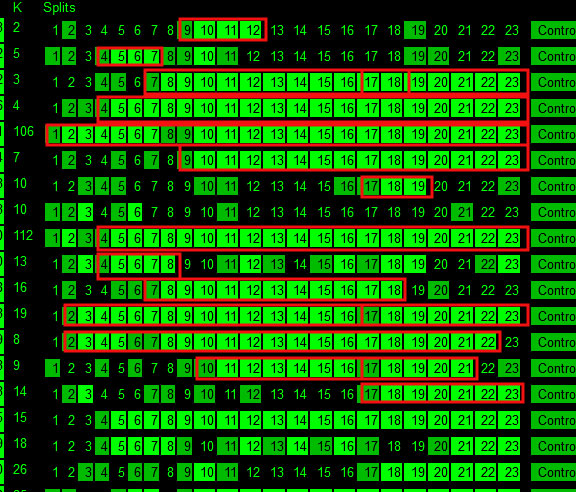 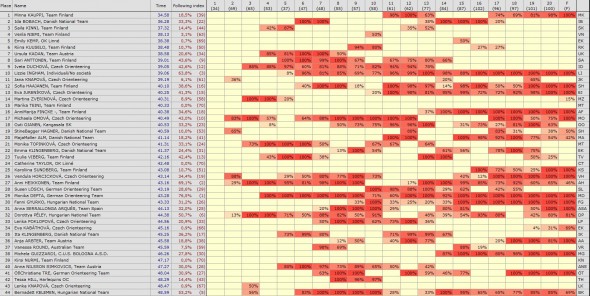 The italian WRE long distance discussed here had it all: It is long, the start interval is short (2% of the winning time), the startfield is ordered by performance (Gueorgiou, Lundanes, Lakanen and Novikov all start in 6 minutes), the visibility is very good, no dense vegetation, no detailed topography, instead partly pastures with visual contact to the runner 2 minutes in front. There are many longer legs, yes, but pretty few real route choices. The routes chosen differ often not much, often with visible contact between different choices. The controlpoints look partly tricky, most of all inside the loop. Which leads us to the loop.

There are many longer legs, yes, but pretty few real route choices

I do not understand why runners still accept separation techniques which work only halfways. Some get sorted out of groups other do not. For example a group consisting of Mamleev, Boström+2 and Petrzela+4 gets divied into Mamleev and Petrzela vs. Boström. Boström falls off, Mamleev and Petrzela continue until the finish and Petrzela beats Boström which had a clear lead over Petrzela entering the loop.

7 new groups, where of 6 build on same loops, 2 runners catched up while running different loops. (Interesting point: the phi loop is actually a catch-up section of the race with its tricky controls). 11 runners still together, 10 due to same loops, 1 because the central leg of the loop was not remarkably faster than the corresponding wing (see Sedivy and Ikonen/Föhr). 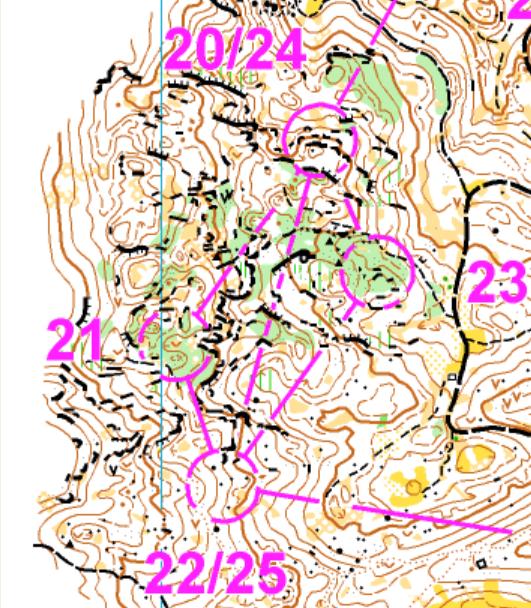 [About what to expect at WOC:] In regard to the WOC the pack dynamics of the top runners is of main interest. They are clearly over-represented in very long lasting packs (=stable packs). Some factors are the same in the as running time, start interval, start order, performance densitiy of the starter field, terrain will be similar. Finally decisive will be the course setting. Many long real route choices (like WOC 2012 and WOC 2013) and a real separation method at the right place could doubtless outbalance the other factors.

A short look at the women’s: Shorter, no separation, not so strong start field, which lead to only some stable packs in the top ranks. Interesting to see the difference Men/Women in regard of the clustering of the stable packs. Men: Top 20 Women: Top 20-60.

[Comment WorldofO: At WOC a long distance course with more real route choices is expected – the terrain should be better suited for it. Also the spreading mechanism (phi loop or butterfly?) will hopefully work better – and be earlier in the race. ]

I resume both WREs with: If we really would give the problem of pack formation any priority, we would know the measures. By not taking them, we show, that we do not care about it. 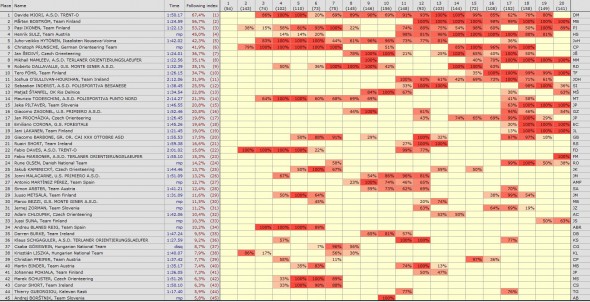 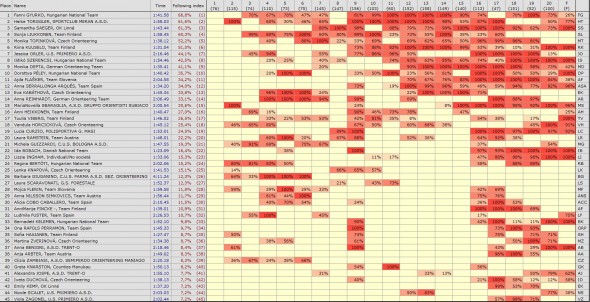 Jan Kocbach is the founder of WorldofO.com - taking care of everything from site development to writing articles, photography and analysis.
@jankoc
Previous What should the future JWOC look like?
Next World Cup Kongsberg & Imatra: All You Need to Know!