The mixed sprint relay in Trento was an exciting race – partly because the lead changed often during the race. However, it was difficult to understand exactly why the lead changed during the race – especially due to the GPS not working well in the narrow streets of Trento. Was it due to mistakes? Due to forking differences?  Below is an analysis of the mixed relay – identifying the key points in the race.

Some key points in the race:

In the following we analyze the relay leg by leg. For each leg a splits graph is presented which shows development between all common controls. When a line for a runner is flat between two controls, that means that this runner has not lost any time on this control. The further down the line goes, the more time is lost, according to the times given at the y-axis. For all illustration, click to get them larger.

Note that the analysis is based on the GPS-data and on split times – the GPS-data being non-optimal for analysis. You can download a Winsplits file which includes custom classes for each forking here. Please leave a comment below if you find things that we did not spot in our analysis.

This analysis is made by Jan Kocbach and Stefano Raus. A modified version of it does also appear in the official WOC 2014 magazine.

Leg 1: Denmark in the lead

Emma Klingenberg gave Denmark a perfect start on the first leg – giving Denmark a 3 second lead ahead of Russia. Switzerland’s Rahel Friedrich was 8 seconds down in third place – and the last top favourite Sweden lost 50 seconds with Helena Jansson – finishing down in a 14th place. Jansson lost her shoe after 10 meters of the race – and had to run significant parts of the race with only one shoe! The first part with the shoe halfway on – the second part barefoot.

Of the top teams, Sweden, Switzerland and Russia had the same forking through all of the leg. Below a forking table is set up by analyzing time differences between the teams which had the different forkings. Only Denmark had a difference for the first and last forkings, but time-wise it was equal overall on this leg. Thus the differences we see in the splits comparison graph are not due to forking differences but rather due to mistakes or different route choices. Klingenberg does a mistake to control number 6 – two controls before arena passage – where she runs in one passage too early and has to turn around and nearly loses all of the lead she had built up.

Leg 2: Denmark gets away from Switzerland

Illustration 2: Split comparison leg 2. There is forking between start and common control (CC) 1, CC 1 and CC 2, CC 3 and CC 4 and CC 4 and CC 5. From CC 5 to CC 9 is unforked, and then there is forking from CC 9 to CC 10.
Denmark’s Tue Lassen did a good race, and returned back 11 seconds ahead of Russia (Gleb Tikhonov) and 17 seconds ahead of Switzerland (Martin Hubmann). Sweden got a lot closer to the lead after a top race by Jerker Lysell – running 22 seconds faster than Lassen. Belgium (Yannick Michiels) was a few seconds ahead of Denmark, but without top runners on the last legs.

From for the forking table, we see that Denmark has 2 times a significantly shorter forking than the other favourite teams – 2 times 8-10 seconds. On the splits graphic above one can clearly see how both Russia, Switzerland and Sweden lose more than 10 seconds at both these forkings; CC 3 to CC 4 and CC 9 to CC 10 (see illustration 2B and 2C below for the forking differences). Tue Lassen loses 18 seconds to the fastest on his forking to the control after the arena passage. This is partly due to problems at the “map exchange” (you should actually turn around the map and not get a new map), and partly time loss at the leg after the arena passing.

Hubmann “only” lost 10 seconds to Lassen on this leg even if he had 15-18 seconds longer forking, and thus actually Switzerland is ahead of Denmark at this point in the relay when counting in the forking differences.

Note also that Lysell runs extremely well on the last loop after the arena passage – and especially on the long leg from control CC 5 to CC 6 (control 9 to 10). 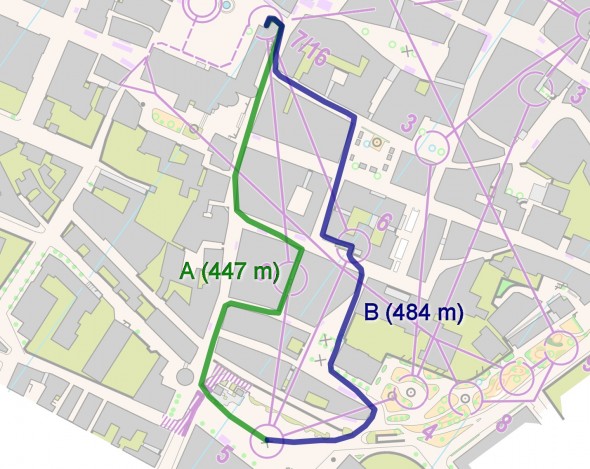 Illustration 2B: Comparison of shortest routes on the forking on CC 3 to CC 4 (control 5 to 7). Denmark has the short forking (variant A, 447 meters) and the other three teams have the longer forking (variant B, 484 meters). 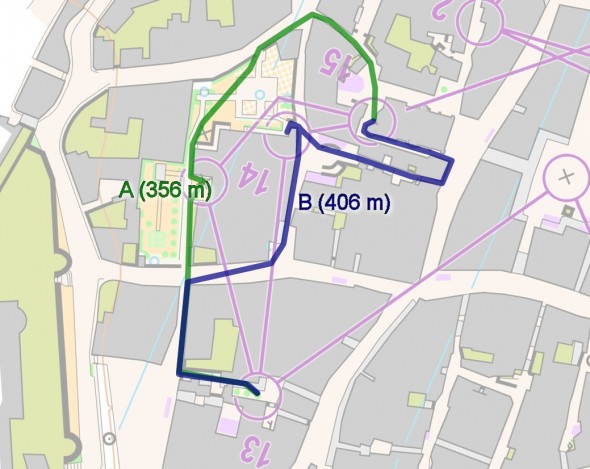 Illustration 2C: Comparison of shortest routes on the forking on CC 9 to CC 10 (control 13 to 15). Denmark has the short forking (variant A, 350 meters) and the other three teams have the longer forking (variant B, 400 meters).

Illustration 3: Split comparison leg 3. There is forking between start and common control (CC) 1, CC 1 and CC 2, CC 3 and CC 4 and CC 4 and CC 5. From CC 5 to CC 9 is unforked, and then there is forking from CC 9 to CC 10.
Matthias Kyburz effectively decided the relay for Switzerland on this leg – beating Denmark’s Søren Bobach with 37 seconds. Of these 37 seconds, 15-18 seconds are forking difference as this leg is forked against leg 2. In addition, Bobach does a mistake to control 13 (CC 9) where he does not see a passage, and runs into a shop – losing around 12 seconds. Sweden’s Leandersson does a mistake on the same control – losing 5-6 seconds. Russia does a mistake to control 7 (CC 4).

Kyburz said after the race that he could run on Bobach’s back for most of the race – and that he felt stronger, never having to push it to the maximum. Kyburz got close to Bobach after the first shorter forking at CC 4.

The gap for Kyburz was in the end a massive 18 seconds down to Russia (Andrey Khramov) and Sweden (Jonas Leandersson) in shared second – with Denmark another second behind.

On the last leg, the forkings were effectively time-wise equal between the top team. Switzerland’s Judith Wyder started with an 18 second advantage, and also had a very good start of the race. Denmark (Maja Alm) lost 8 seconds to Wyder already to the second control (CC 1) – mostly due to a longer forking. Alm has however a shorter forking later in the course, balancing this difference. Sweden (Lena Eliasson)and Russia (Galina Vinogradova) both have the short forking, but lose 5 and 15 seconds to Wyder on mistakes, respectively.

Wyder however does a bad routechoice to the control before the arena passage (control 6, see illustration 5). Both Alm and Wyder have the same forking, but Wyder runs to the right (A) which is longer and more complex to run – losing 10 seconds to Alm (running B) who has really speeded up in this part of the race.

Wyder loses another 12 seconds to Alm on the long leg to control 11 (CC 7) – this is an unforked leg – and Wyder loses time due to a route choice mistake. Now Maja Alm is getting closer and closer to Wyder – on the second part of the course she beats Wyder with 24 seconds. This is still not enough though – Wyder can turn around on the run-in and see Alm at safe distance 10-15 meters behind. 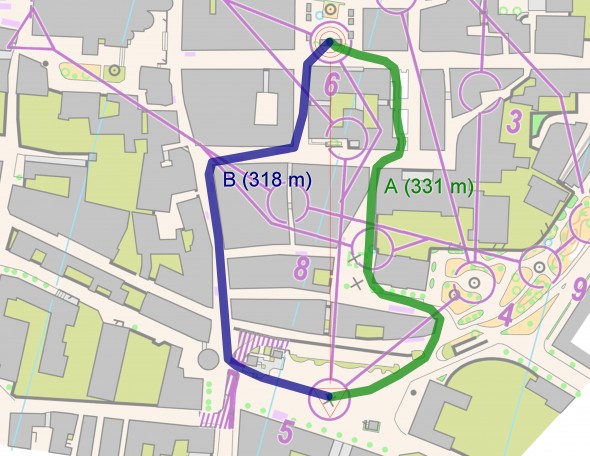 Illustration 5: Comparison of routes of Alm (B) and Wyder (A) on last leg in fight for gold. Both had the same forking, but Wyder took the wrong route choice and loses 8 seconds to Alm. 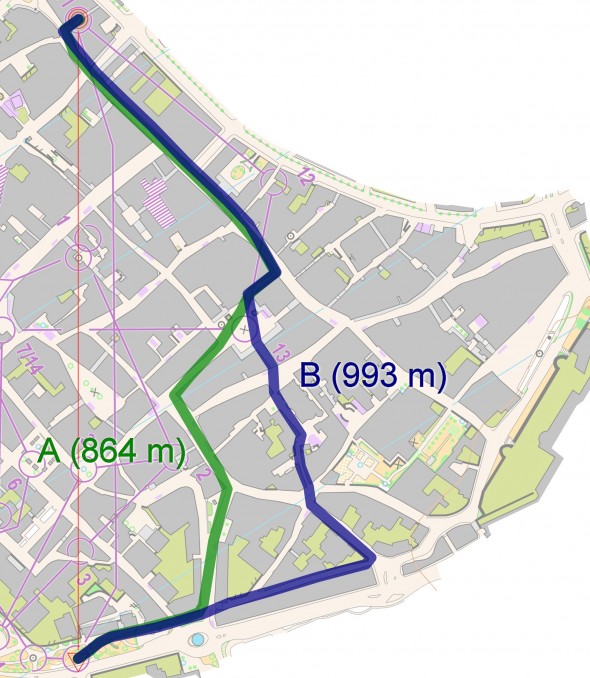 Illustration 6: Alm runs A on the long – most other team do the same. Wyder however does a route choice mistake, and from the GPS it looks like she runs B (it might however be a bit shorter). Wyder loses 12 seconds on this leg. 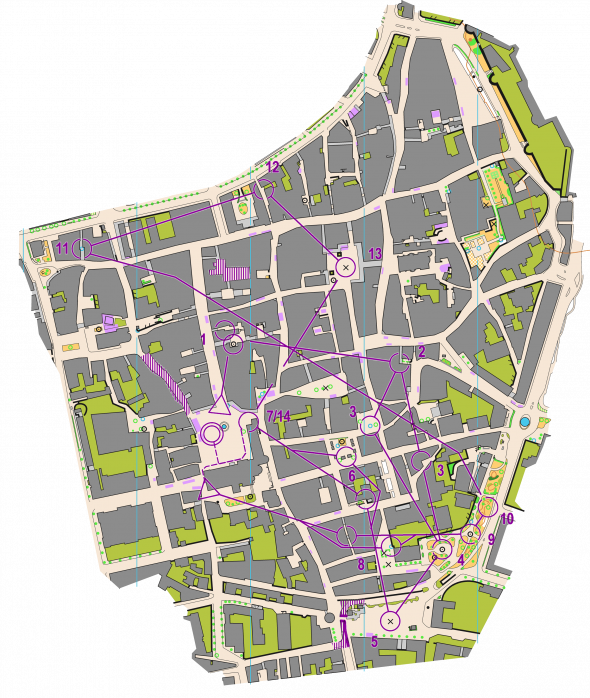 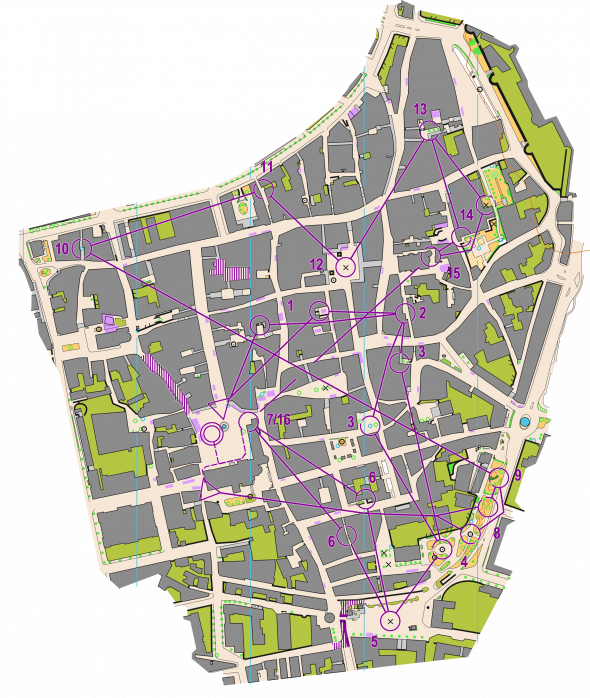 Jan Kocbach is the founder of WorldofO.com - taking care of everything from site development to writing articles, photography and analysis.
@jankoc
Previous WOC Mixed Sprint Relay: Victory for Switzerland
Next Favourite preview: Who will win WOC Long 2014?