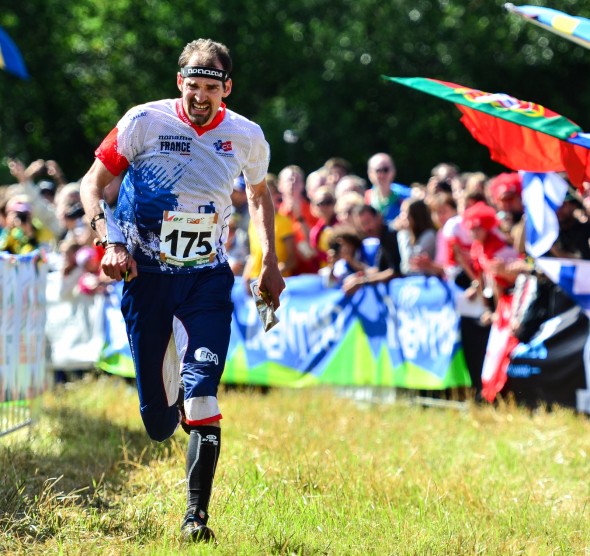 – Now finally they will stop calling me the King of Middle, Gueorgiou commented. In two days in the middle distance final Gueorgiou might however take back the middle throne – and just be the King of Forest Orienteering.

The two other medalists today – Daniel Hubmann (silver) and Olav Lundanes (bronze) – both had two gold medals over the long distance from earlier and had the possibility to get historical today with three gold meldas. The fight was very close until the arena passing – all three being within 50 seconds. However Gueorgiou again proved strongest towards the end, and won a clear victory.

Gueorgiou made the decision to run the long distance final after Jukola – when he beat everybody with a large margin on the last leg.

– I made the decision to run long after Jukola. Already after the World Ranking event [in Asiago in June] there was a good feeling, but I was not sure until after Jukola, the King of Long said. 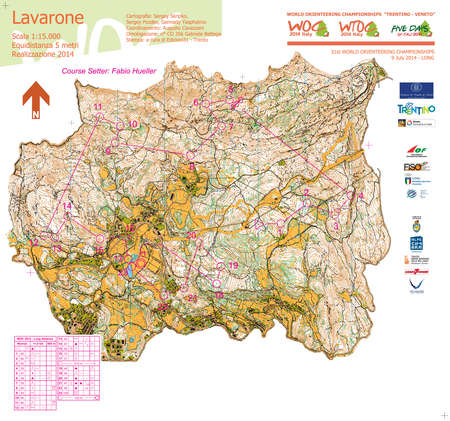 The long distance courses in this year’s WOC did not have any very long legs, but still had several quite long route choice legs where the field split into many different route choices. According to the winner Gueorgiou this was however not the most interesting course possible in this terrain,

– I have made many more interesting courses than this one, he said just after finishing the race. – We had for example a really nice long leg. We spent an hour discussing only this leg yesterday.

After things cooled down after the flower ceremony, Gueorgiou discussed the course in more detail with the IOF Event advisor who had knowledge about all the restrictions set by for example fences and forbidden areas, and it became clear that many of the nice legs were NOT possible in reality. Another interesting fact that came up: 2270 small cliffs were removed from the complete map in the process of making it ready for the championships – the original version was quite black.

Here you find the course:

The full analysis of the race will be published tomorrow morning – it will be an interesting evening analyzing the course!

Jan Kocbach is the founder of WorldofO.com - taking care of everything from site development to writing articles, photography and analysis.
@jankoc
Previous Favourite preview: Who will win WOC Long 2014?
Next WOC Long 2014: Maps and Results