Haraldsson and Wyder: Orienteering Achievement of 2014

Jan Kocbach December 18, 2014 Poll-14 Comments Off on Haraldsson and Wyder: Orienteering Achievement of 2014 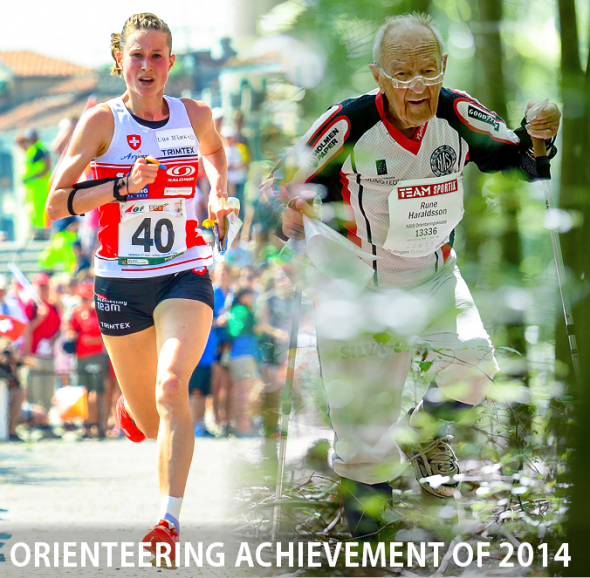 Judith Wyder and Rune Haraldsson have been awarded with “The Orienteering Achievement of 2014″ titles in the men’s and women’s class, respectively! Wyder  – the new Queen of orienteering  – won the award with more than one third of the votes. Among the men, 96 year old Rune Haraldsson has made an unforgettable impression on the orienteering world with his exceptional stamina – giving him a clear victory in “The Orienteering Achievement of 2014″ .

Rune is just amazing. He really looks like he enjoys our sport! (Judith Wyder)

The vote has been decided by the big international readership of WorldofO.com – nearly 4000 unique votes from around 60 different countries have been delivered – making these results very representative for the worldwide orienteering community. Big thanks go to all voters and to the event sponsors  Five+Five days 2015, Sun-O Barbate O-Camp, Riga Orienteering Week 2015, Bergen Sprint Camp 2015, Scottish 6 Days 2015 – Highland 2015, Croatia Open 2015, OOCup 2015 and Sälen 3+3.

In the Men’s class Rune Haraldsson won with 29.0% of the votes ahead of Søren Bobach with 19.5%, Daniel Hubmann with 11.5% and Tim Robertson with 10.7%. In the Womens’s class Judith Wyder won with an impressive 37.9% of the votes ahead of the OK Pan Århus with 19.2%, Svetlana Mironova with 13.2% and Tove Alexandersson with 9.0%. The fascinating stories behind each nomination can be read at the poll page for men and women, respectively. 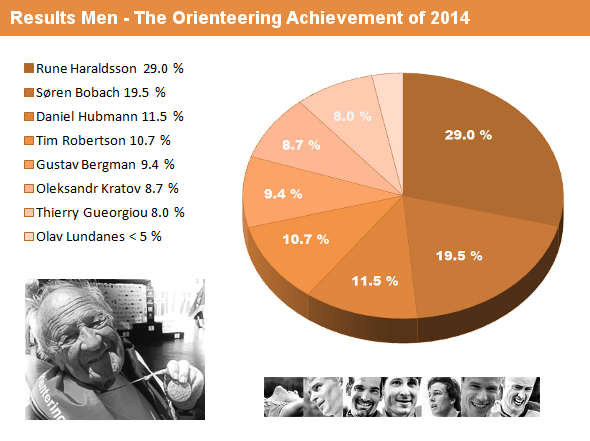 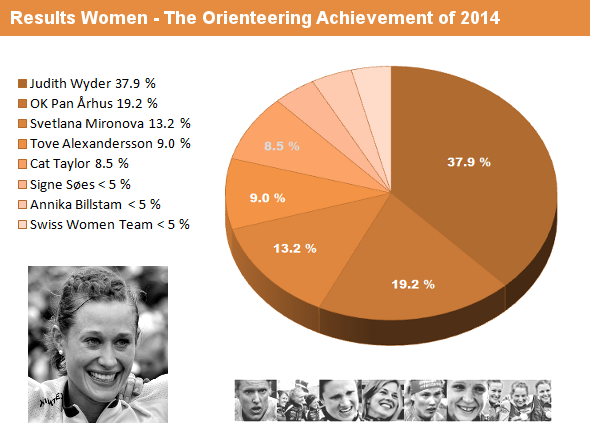 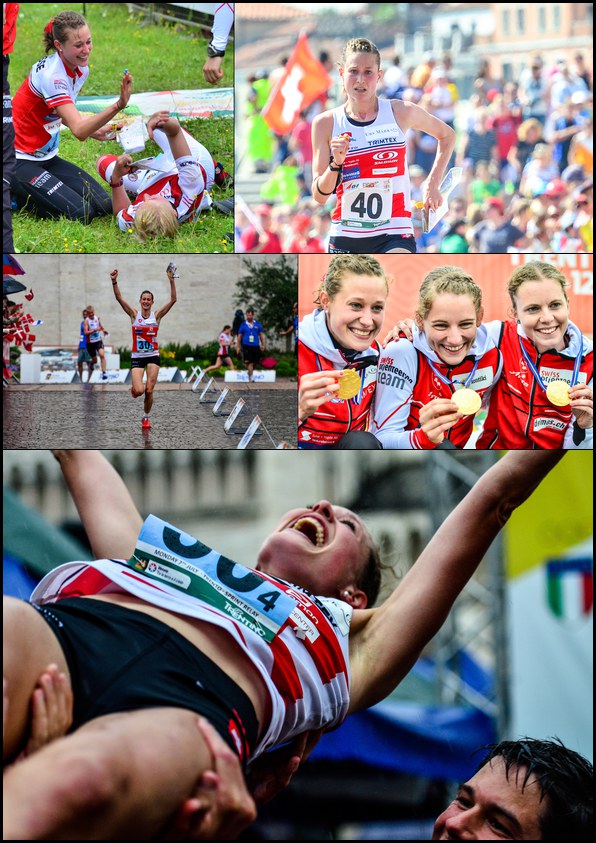 Nominated for: The new Queen of Orienteering – surprising the orienteering world with an impressive line of top performances: 3 EOC gold medals and 3 WOC gold medals for an athlete who was “one of many” in 2013.

Q: Congratulations on being awarded “The Orienteering Achievement of 2014″. What an incredible season for you! What do you think was your biggest achievement this season?

The season 2014 was indeed incredible. With lots of wonderful emotions. Three of my six international gold medals were with the team. For me these achievements with the shared emotions were the biggest of the year. When I look back, I also like my stability in all the international races!

For me these achievements with the shared emotions were the biggest of the year.

Q: Can you name three key persons who were important for your achievements in 2014?

Fritz Aebi as my personal coach has been one of the most important person over the last few years. He helped me a lot with the setup of my training and supported me also in periods when everything wasn’t going with the easy flow. Secondly Vroni König-Salmi. As the coach of the Flying Swiss Girls, she was a key player for my success and all the improvements in the last years. We had lots of important conversations about orienteering technique and training setup. Last but not least, Gabriel Lombriser, my partner. He is the person I talk to and train with the most when I am at home in Bern. He supports me and helps me to have total focus on orienteering.

Q: In addition to being nominated yourself, the Swiss women team was nominated in the “Orienteering Achievement of the Year”. How much do you train with the others in the national team – and how much does the team mean for your success?

The team means a lot to me. The past years we have been a bunch of girls at a similar level who pushed each other to higher standards. We built up a super team spirit that is the key to all the relay gold medals! Normally we just train together in training camps or at trainings within the national training center in Bern.

Q: Big achievements is one thing – but to get as far as you have, I guess it is important to have fun with what you are doing as well. What is the most fun you have had during orienteering the past year?

Yes, fun is very important for me. You have to love what you are doing, to be able to achieve your goals! And on training camps we also have a lot of fun in addition to all the trainings. This spring we even droched bonnets with the girls, it might sound boring, but it was a lot of fun.

Q: What do your days look like now in the winter time?

During the winter I am working 3 days a week. A working day looks like this: Getting up at 5.30 and taking the train to Basel. After working until 12 o’clock I do a strength training before I work another 4 hours. When I am back at home in Bern, I do my second training of the day – this is usually a running training. I try to do 2 trainings every day, one running or orienteering training and one alternative training which could be deep water running, strength training or indoor cycling. And I also look forward to the first snow… Then you can also find me on the cross country ski-tracks.

Q: What are your main improvements compared to the 2013 season? Did you have any special focus in the training the past winter which you think helped you take that step up?

Before and during the season I worked intensively with my Mental Coach. On the physical side, I did the intensive trainings with the boys from the track club (ST Bern). That gave me a lot of extra power! Important was also, that I could train injury free.

I focused a lot on the road last year, which made me a lot faster and stronger. But I was also able to adapt the speed in the forest. Don’t ask me about my times on the track…I have actually no time whitch shows my speed on the track, and I have been faster on 5 km street races… But of course it is a thing to do in the future :-)

Do not dream your lives, live your dreams!

Q: Last year when Simone Niggli won “The Orienteering Achievement of 2013″ she was asked who would take over her place when she “retired”. She answered that she hoped for success for Helena Jansson – and that we should look out for the Swiss girls. She was definitely very right about the Swiss girls! How do you see next season? Can you manage to continue this immense success?

Thanks Simone, for the confidence! For sure I will try to perform with the same consistency as this year, and I will improve all the skills! The others won’t sleep as well! I think the whole women’s orienteering world circus moved closer together in the last year. And this will continue. There are several girls with abilities to get Top Rankings. Certainly Tove Alexandersson and the Swedes, the whole Danish Team and for sure the Swiss Girls. I bet on even more top performances for my team mates in all the disciplines. We will be even stronger!

Q: If you could choose between becoming World Champion now and being able to run orienteering the way Rune Haraldsson does more than 70 years from now when you are 96 – what would you choose?

Rune is just amazing. He really looks like he enjoys our sport. For me the most important thing is to stay healthy in old age. And if that means to not win any medals in the future, it is OK. But for me it needs not  to be just orienteering. I love to ski, for example. Or hiking is also something I would like to do more in the late years.

Q: Any final words to your fans out there?

Thank you for voting for me! It is a real honor to get the “Achievement of the Year” title for the first time! And for all orienteers out there: Do not dream your lives, live your dreams! 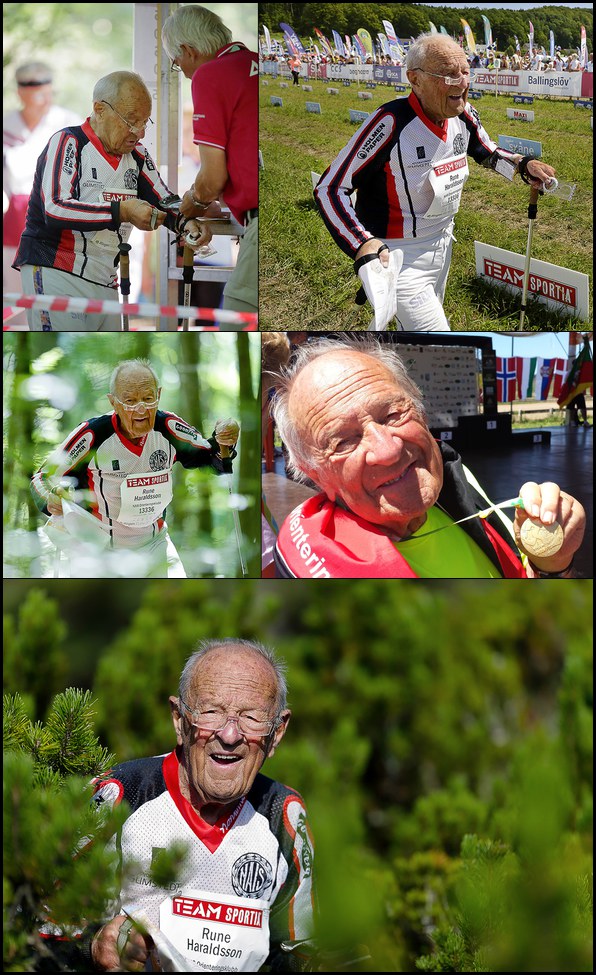 Nominated for: 96 years old – the oldest competitor at the World Masters Orienteering Championships in Brazil – mastering both sprint and long distance and getting the gold medal in both for his performance.

Thank you very much. I think that this is great for the sport – to show that it is possible to compete in the sport until my age. And to get some publicity around orienteering. This would not be possible in any other sport.

Q: It is incredible to still be orienteering at the age of 96 years. For how many years have you been doing orienteering? And how many races do you run each year?

I have been orienteering for 80 years. And I have always been healthy, always injury free and always been in good shape. I have been lucky, being able to do orienteering through all these years. Nowadays I run maybe 10 races each year – this year I was at the Masters in Brazil and at O-Ringen.

But I think I will reduce the racing from now on – at least the big travels. Because I have achieved so much this year – with the two medals in Brazil and everything. I am so happy now; I think I will stop my long career.

Q: For many at your age the traveling to the World Masters Orienteering Championships in Brazil would be more than enough – you even run several races there. How was the traveling? And how was it to compete in Brazil?

I did a full check at the doctor’s before leaving, and he said I was healthy and that it would be no problem to travel by plane to Brasil. The last years when the World Masters has been in Europe, I have however been driving my own camper from Sweden to Spain, Hungary, Portugal, Switzerland and so on.

In Sweden the forest is green with blueberry bushes on the ground and many details – in Brazil there were less colors and less details in the forest. The orienteering was not as interesting as here in Sweden.

Q: In how many countries have you orienteered? And what is your favourite terrain?

I have been orienteering on all continents except for Africa, including most countries in Europe. My favourite terrain is in Kolmården. Not far from where I live. This is the greatest terrain I can imagine. [Editors comment: Here is a map from Kolmårdskavlen 2014]

Q: What are your greatest achievement on the elite level?

I have two Top 10-places in the Swedish Championships on elite level. And I was close to being on the National Team at one point. But I was never in the team. For most of the time I have been an “elite amateur”.

Q: What is the biggest change which has happened in orienteering through your 80 year long career?

The biggest change is that everything is modern now – especially the maps. Now everything is exact – earlier it was all about luck. Now orienteering is an exact sport. And with all the computer systems you can get exact information about the race development.

Q: If you could choose between becoming World Champion when you were young and being able to run orienteering now at the age of 96 and winning the World Masters title – what would you choose?

I would choose to win the Masters now. I have had such a rich life, being able to do orienteering for 80 years.

Q: Thank you very much for your time! What is your plan going forward now?
Thank you. Now I will be driving to the mountains for 3 months of skiing. 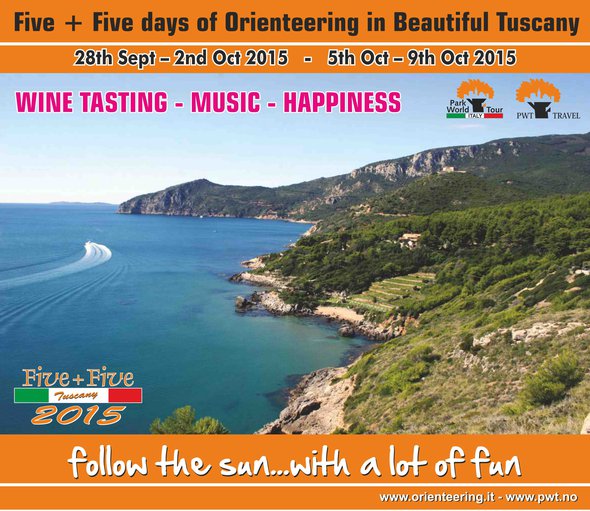 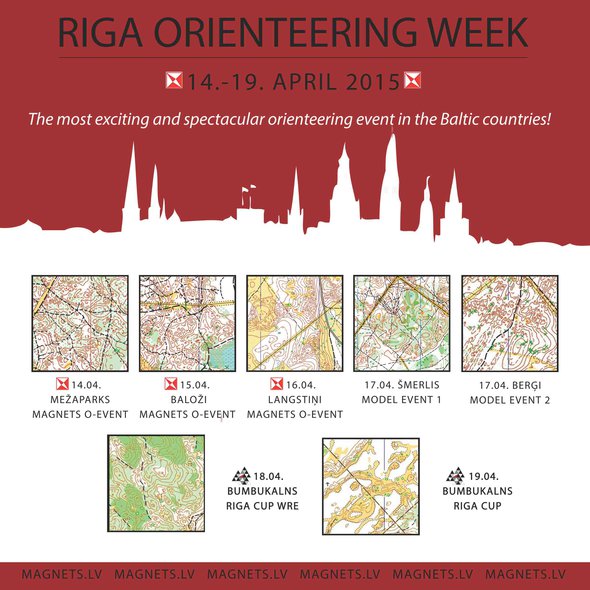 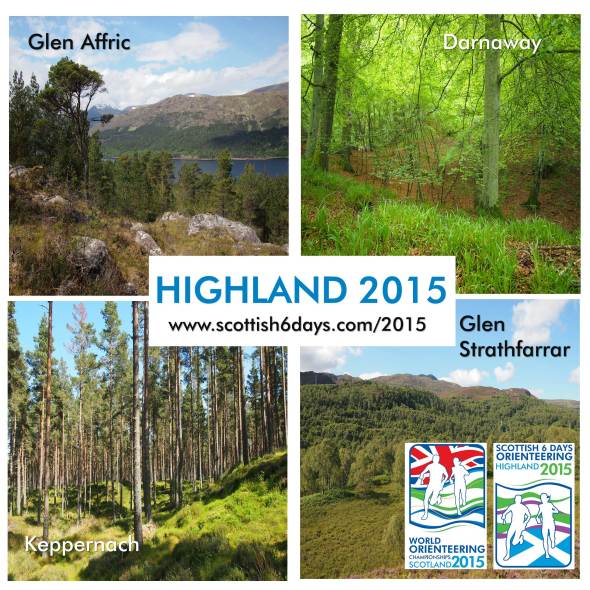 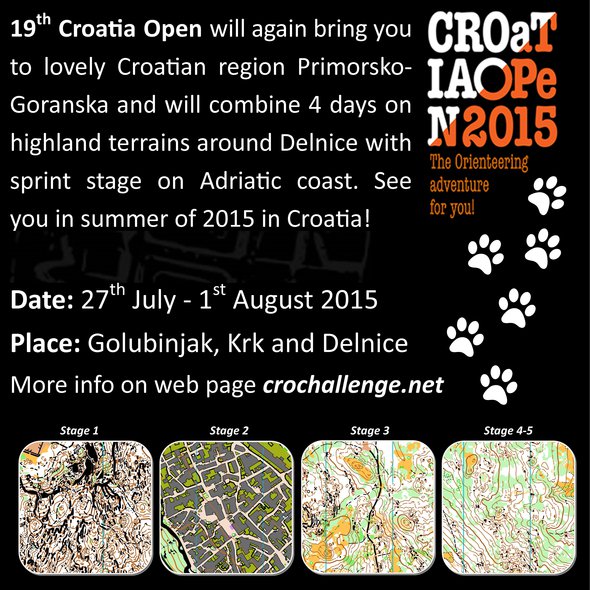 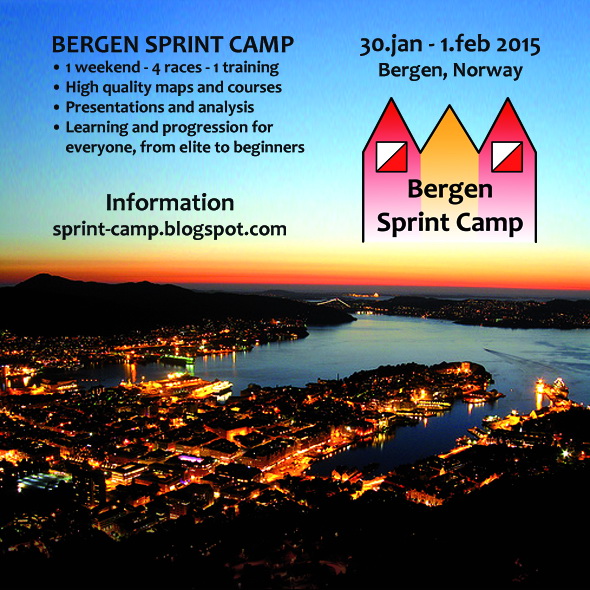 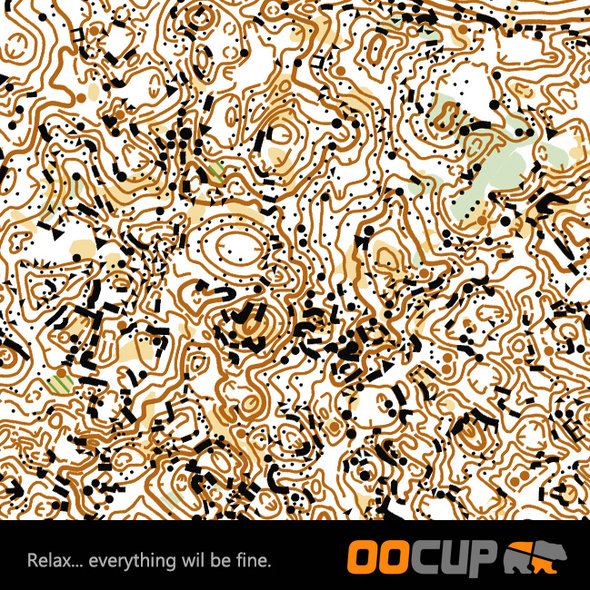 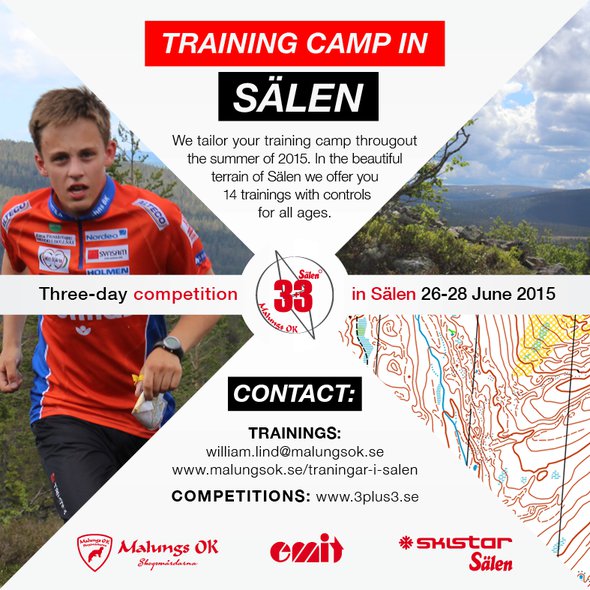 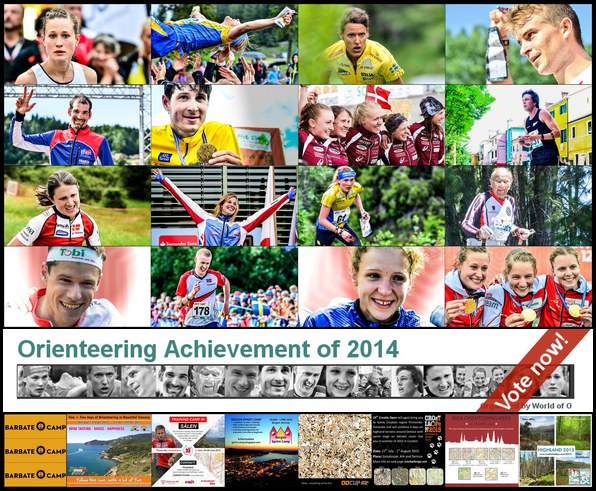 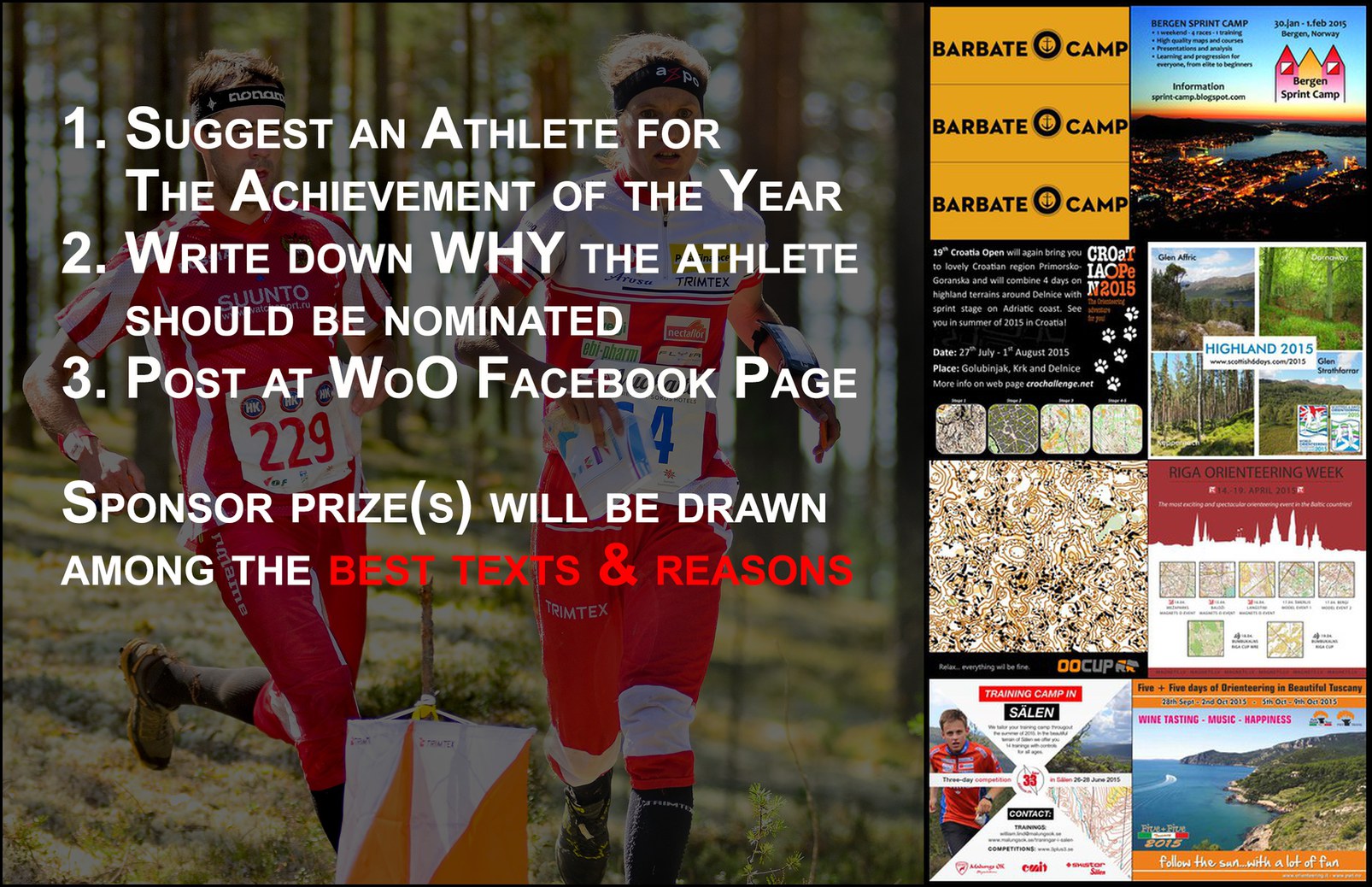 Who did the Orienteering Achievement of the Year 2014?