The course setter at JWOC 2015 Sprint had done a very good job – and set a course which offered many interesting route choices. A combination of hilly terrain with varying runnability and some passages which you had to be careful to find, made it necessary to run with full concentration to get a good result.

A split time analysis considering where the medals were decided has been made in a separate post, this article looks into the interesting legs based on a combination of the GPS data and the official split times.

The first interesting leg in the men’s class was the 2nd leg. Before starting to look at the details, this looks like a very interesting leg because there are very complex choices to be done. However, based on the split times, there are no big time differences between the different alternatives – see both the comparison between the top runners in the first illustrations and with many runners in included in the second illustration. Tim Robertson (gold medalist) is fastest with a left variant – and he wins the leg 3 seconds ahead of Niemi (silver medalist) who runs to the right, but not far right (yellow line). Four different routes are run within 8 seconds. The only one of these which is really not good is probably the very rightmost one by Lithuanian Bartkevicius (bronze medalist) 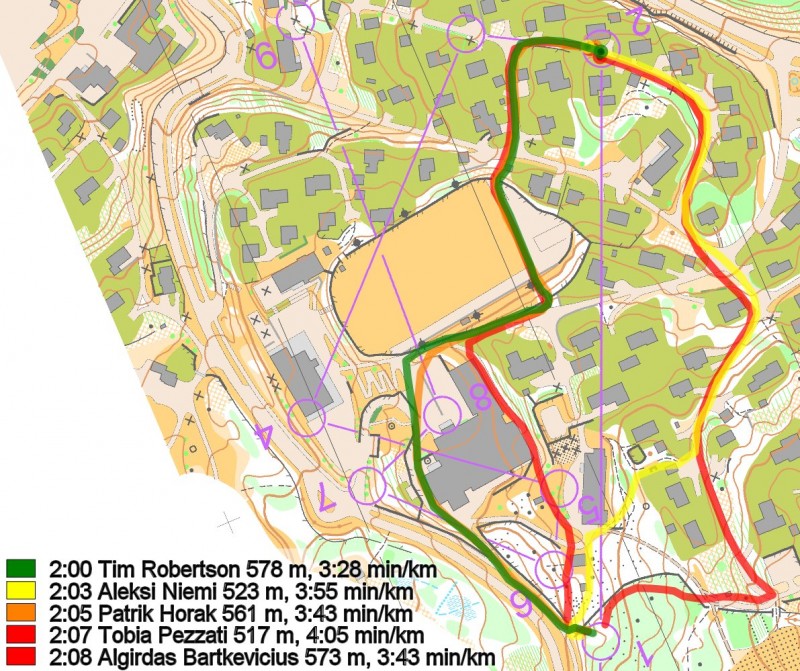 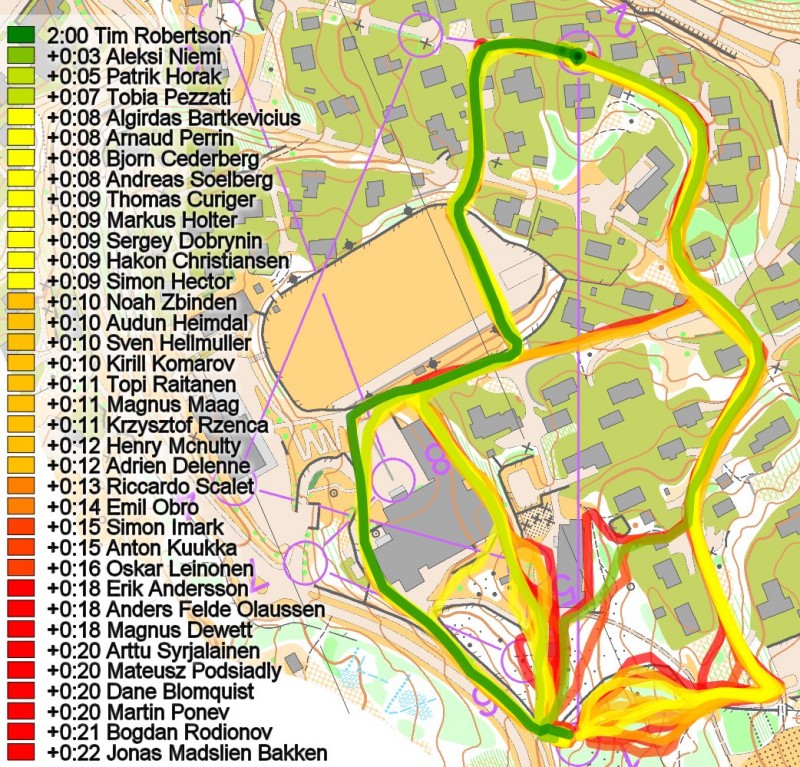 Leg 3-4 is an interesting leg where there is a clear time difference between the different alternatives. Here Robertson goes far right – running significantly longer than the two more direct routes and loses 8 seconds on the fastest split time of Swiss Joey Hadorn (who runs very fast – his technical problems is what takes him out of the medal fight). The two more direct routes look quite similar on the map, but according to the split times it may look like the right side of the sport field is slightly faster. 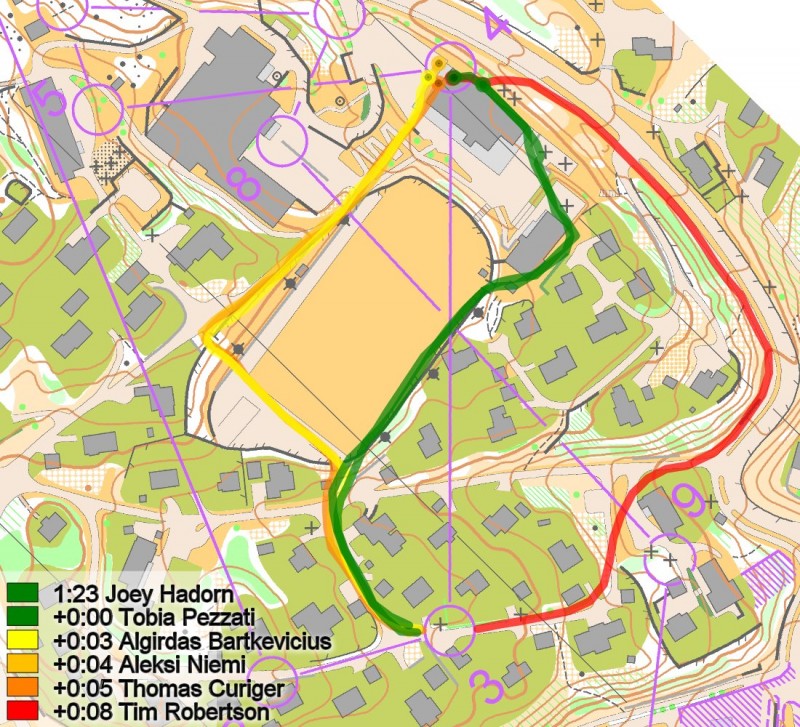 This leg does not look to tricky when looking at the map, but several runners lost time here. Three of the runners in Top 6 lost 9 seconds or more; it is not directly due to technical difficulties though, but rather due to the orienteering not being accurate enough – maybe reading further into the course instead of being focused? Bartkevicius loses time early on the leg before the big building by making an extra loop there – while Pezzati (would have fought for silver or gold with good result at the 9th and 10th leg) lost some time on the last part of the leg. Note how Robertson runs left and gets the fastest split with this choice (2 seconds faster than the next on the leg, Raitanen who runs the same routechoice as Robertson, 3 seconds faster than the other medal candidates). 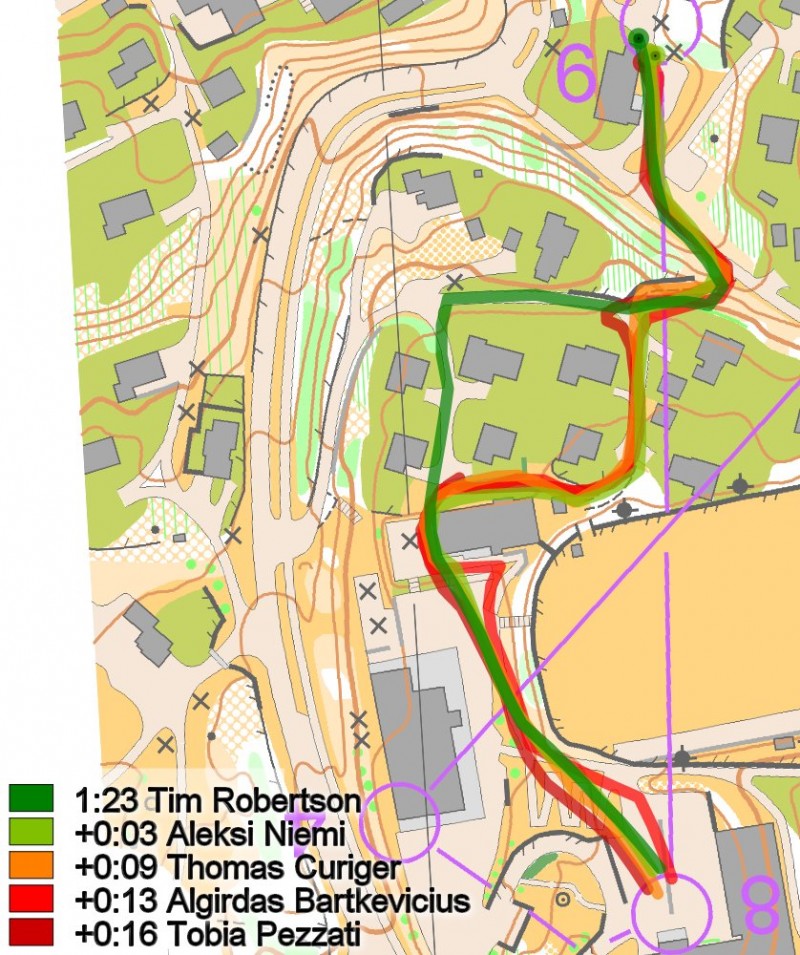 To control number 10 Tim Robertson is the only one of the medal candidates who runs the leftmost routechoice – which is some seconds faster than going right. Even if it is longer, you can run on better surface an keep higher speed. Pozzati again does a beginners mistake and goes to the right some meters on the middle of the leg (out of the map sample shown here) – losing 15(!) seconds on this easy leg.

The leg after the arena passage. Not a very interesting leg, but notable because Curiger loses 14 seconds here. 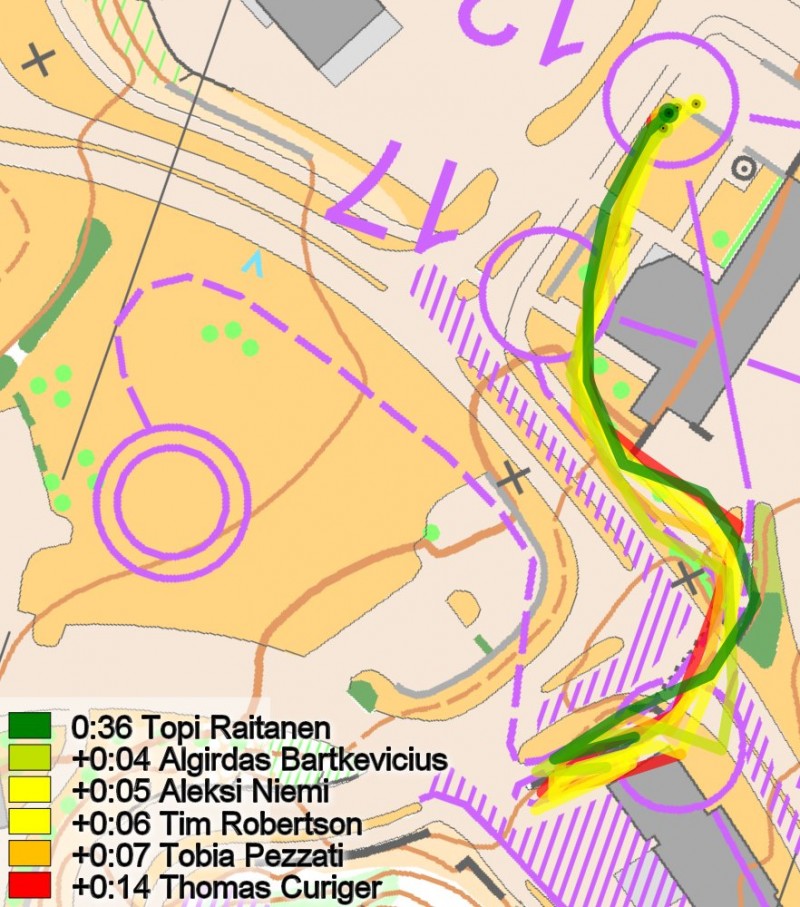 No big time differences, but an interesting leg because winner Tim Robertson is in a “bad” period here and runs left – costing him some seconds. Curiger does the same. Right is significantly shorter, and even with some extra corners you can run faster here. 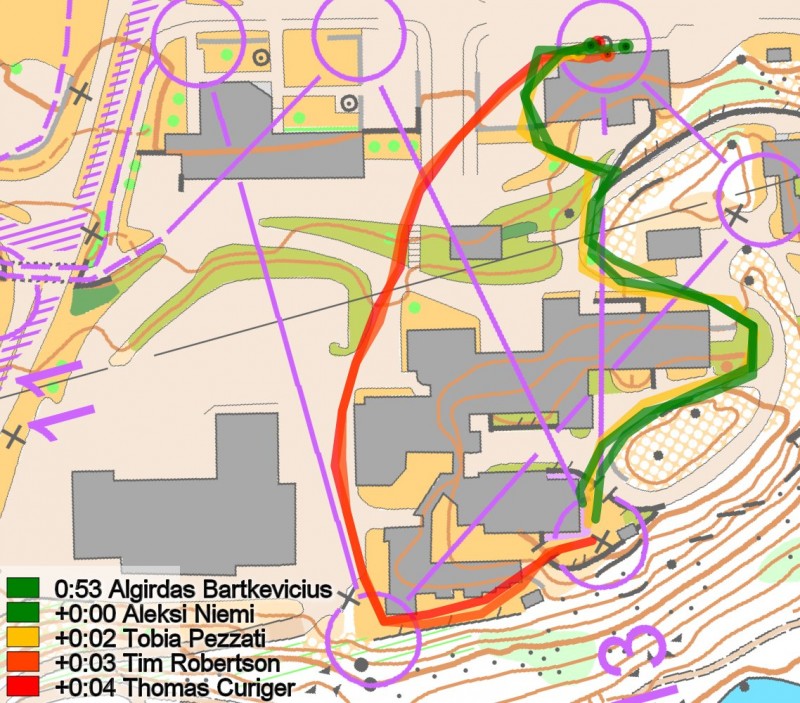 Again a leg with only a few seconds difference on the different route choices, but where one route is significantly faster than the other. Here Robertson runs right and Niemi left – Niemi losing 3 seconds to Robertson, exactly the gap between them in the end. Left is slower due to the softer ground and some more corners. 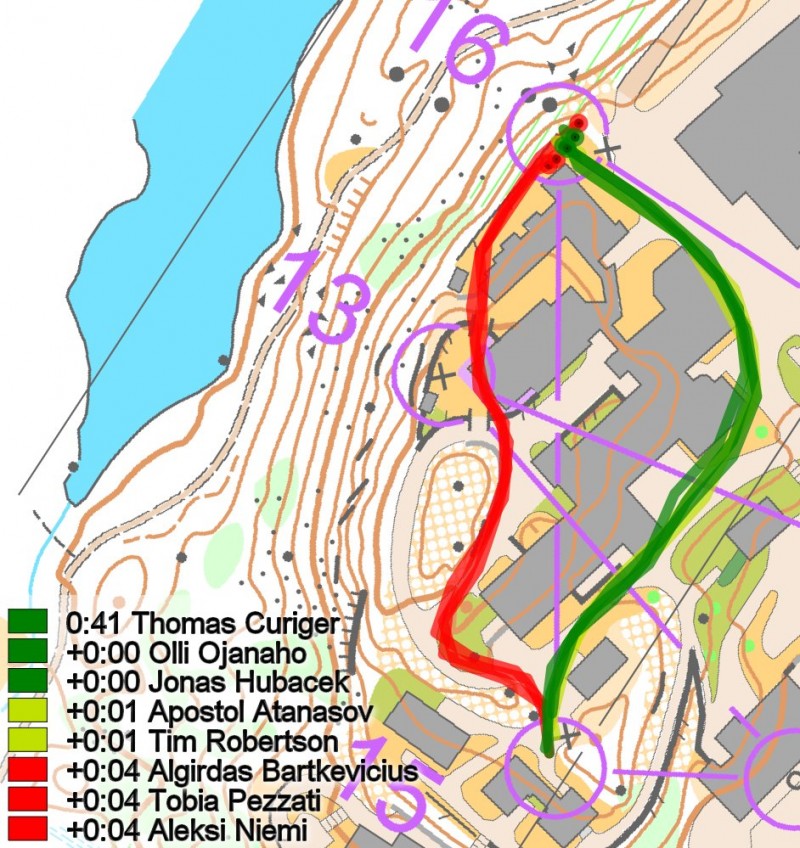 The first leg did not have any route choice challenges, but was rather a quite easy control in the forest. Heidi Mårtensson (silver medalist) has a bad start to her race, going too far up in the stony area, and loses 8 seconds. Aebersold (gold medalist) also loses some seconds to the best split time, but is 4 seconds faster than Mårtensson. Ukskoski start with the same speed as Aebersold. Koskinen has an offensive start and wins the leg with 2 seconds. 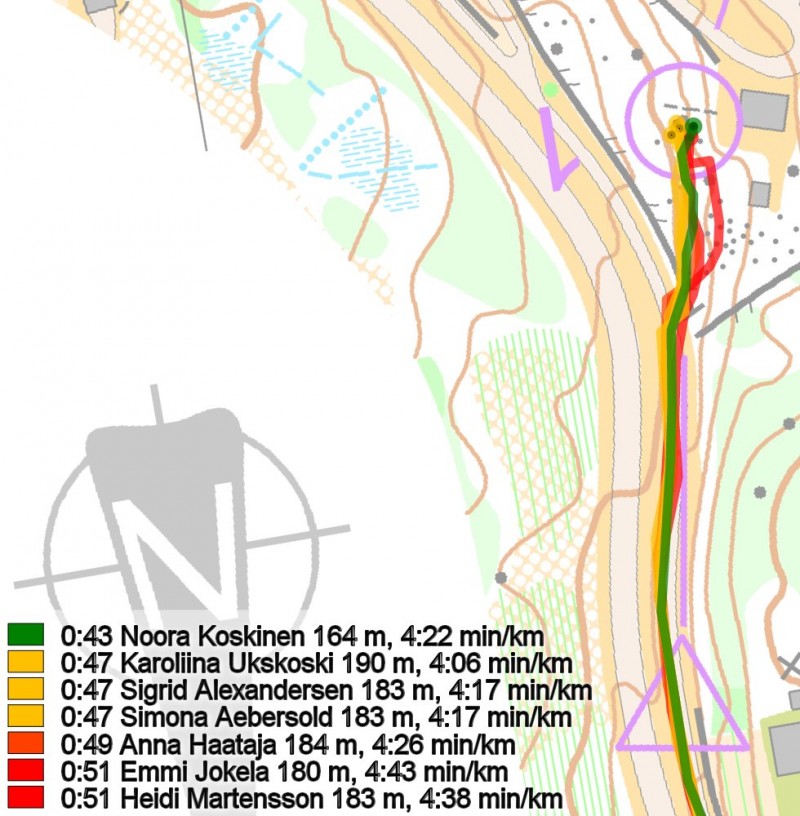 To control 3 Simona Aebersold really fires up her engine. The Swiss runs the leg in 2:08 on the leftmost of the green routes below – Haajata (5th in the end) runs the same time but on a different route (rightmost of the green routes) – thus these routes are approximately equal.  Heidi Mårtensson does however go all the way to the left (blue route) – losing 11 seconds. This is a choice takes only by Mårtensson (see illustration further down with more runners included), and is obviously not a good choice. Note also how Alexandersen (and partly Uskoski) loses time early on the leg going through the forested part. When looking further down on the results list, many runners lose time here by taking a route even more to the right – or losing time around the first big building right after control 1, probably not planning ahead well enough and not seeing the unpassable fence on the map. 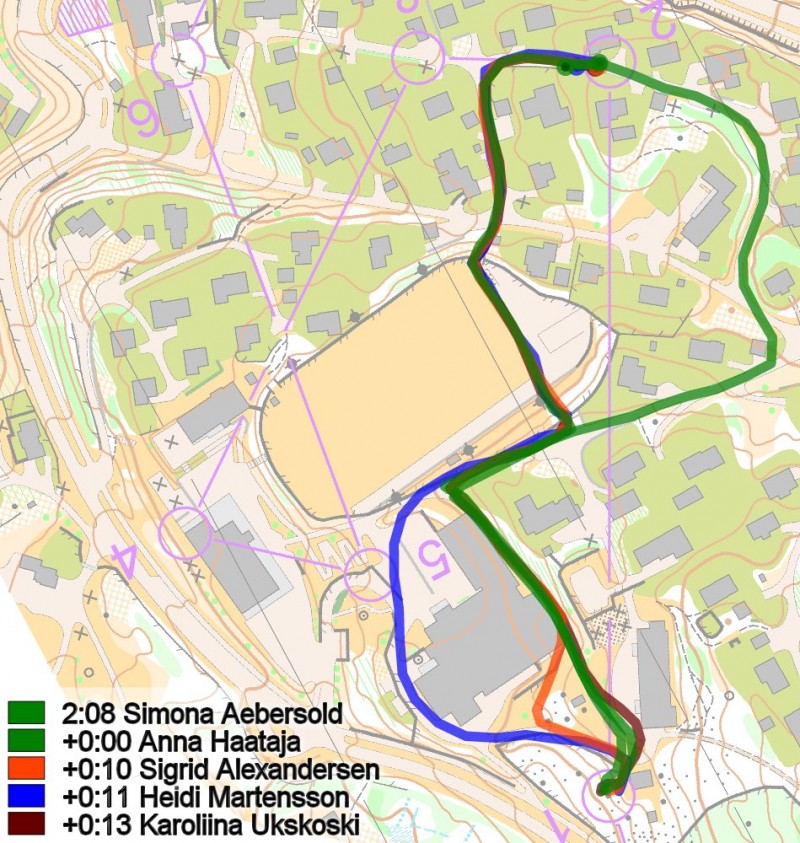 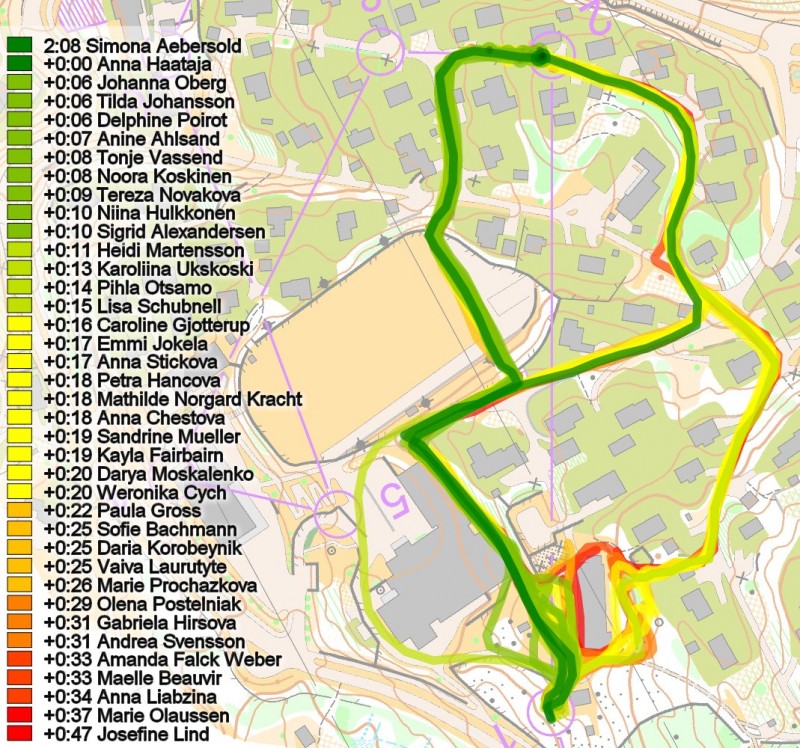 This is the leg where Heidi Mårtensson loses a lot of time. Clearly the fastest is to go left at the edge of the sport field like Aebersold does (she wins the leg with 9(!) seconds ahead of Uskoski – both of them go left. Going left you save climb and you run quite short. Heidi Mårtensson takes a more direct route where you have to take around 10 meters extra climb in addition to run on a small path – Jokela (finished 6th) even lost 32 seconds on the same route as Mårtensson. Several other of the top 6 runners lose significant time here by going even more to the right.

Looking at nearly all women with a GPS (illustration below), you see an even clear picture. Few women saw the best route, but the ones who saw it saved a lot of time. This is a very nice leg because you can see from the map that this is the best route – but you need to plan ahead. The men’s leg was a bit differently balances (the 4th control a bit further to the left), and thus going left/right of the sport field was approximately equal and it was easier to see the good solution and fewer were tricked into running down to the right and either running longer or taking extra climb. 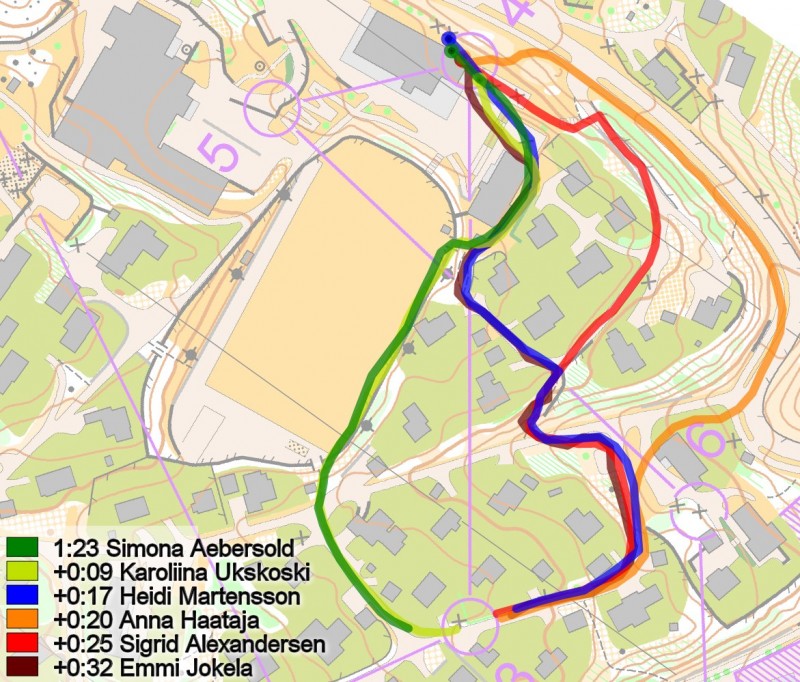 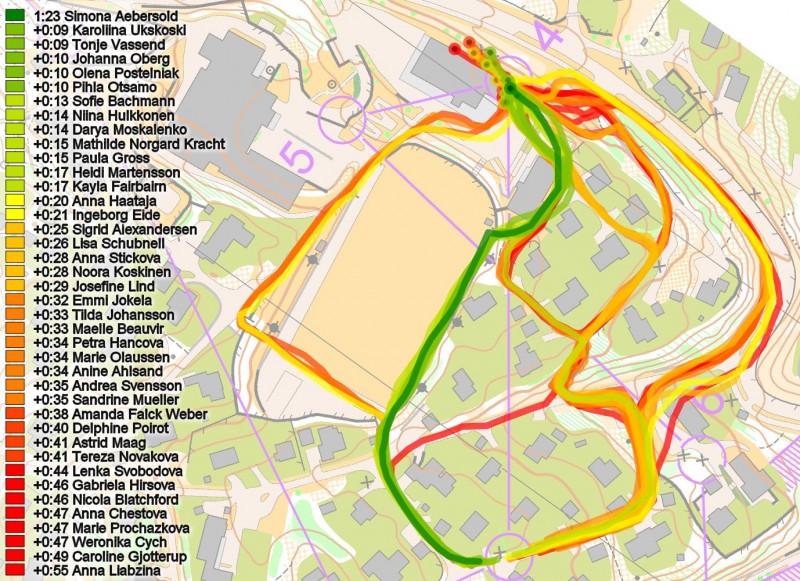 Short leg which is interesting mostly because several runners (including bronze medalist Ukskoski) takes the wrong route (left) and lose 5-10 seconds – typically not planned well enough ahead and seen the fence. 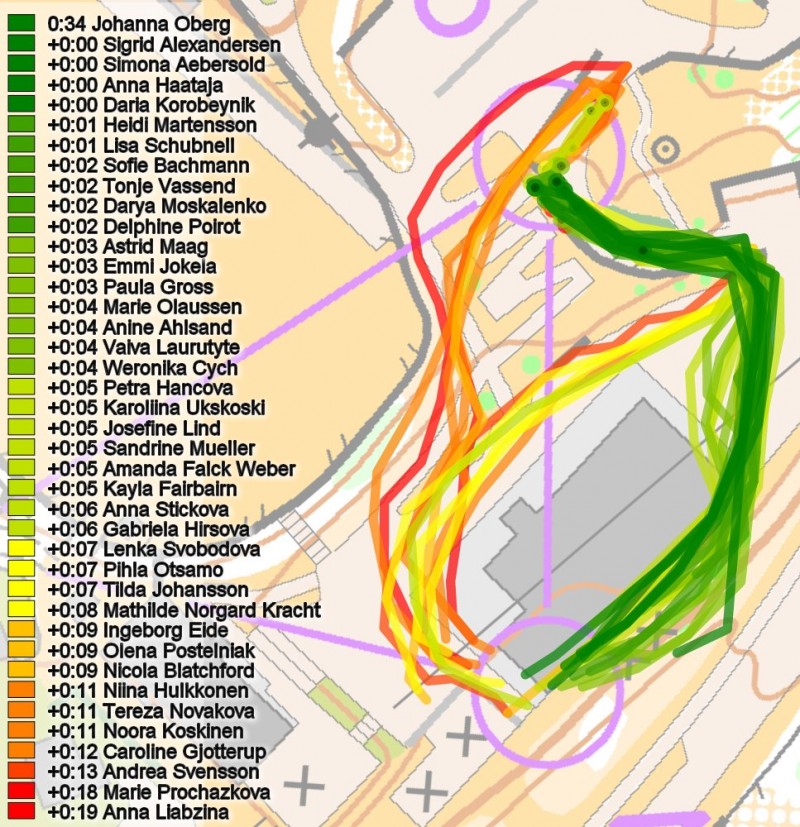 Looking at all the runners, a lot of different choices are taken, but among the Top 6 there are quite small differences. Either going all the way left or a direct variant are approximately equal. 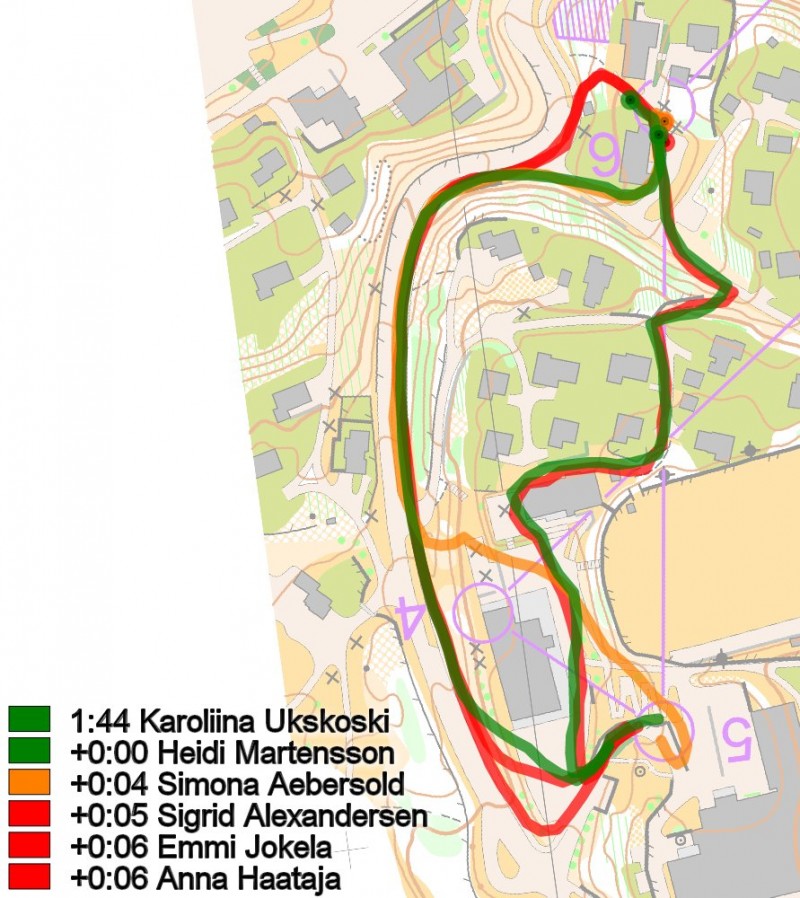 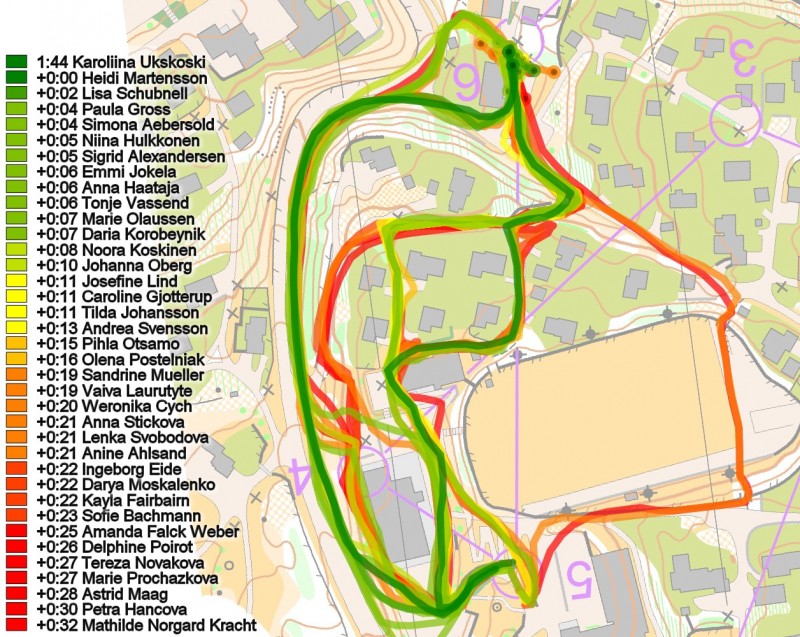 This is one of the few legs were Aebersold takes a wrong choice and really loses some time. Jokela runs a direct route and wins the leg – Aebersold runs too long (right) and loses 10 seconds to Jokela. Mårtensson also does not see the best direct route and goes half right and loses 5 seconds to the best split. Aebersold is the only one taking her choice – and clearly just lost concentration for some seconds when choosing the route.

When looking at all runners (illustration further down), it is very clear that direct is the fastest choice. 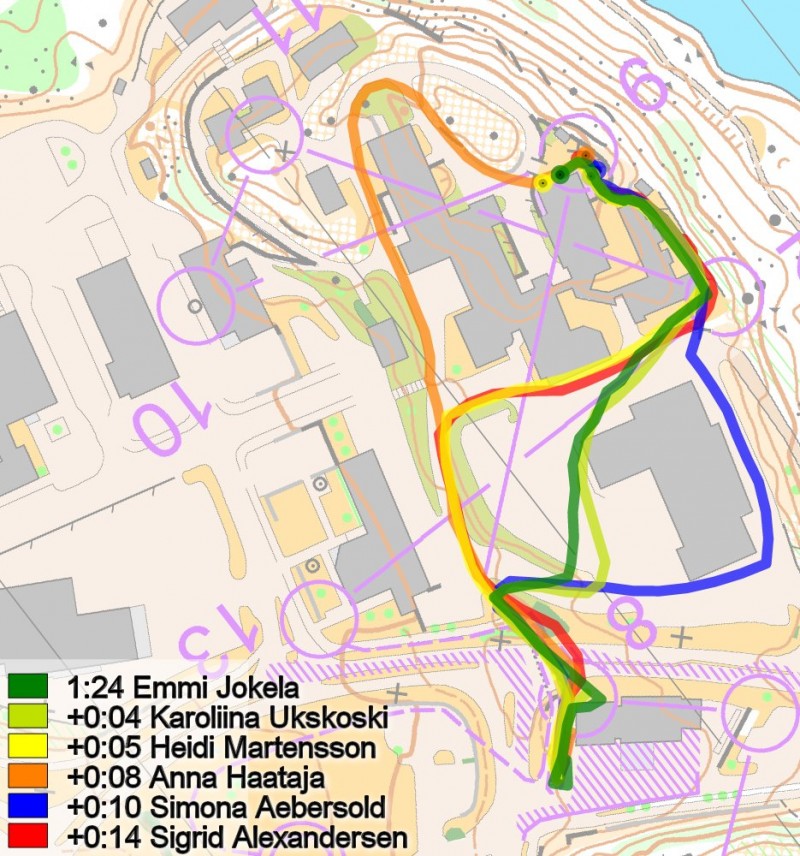 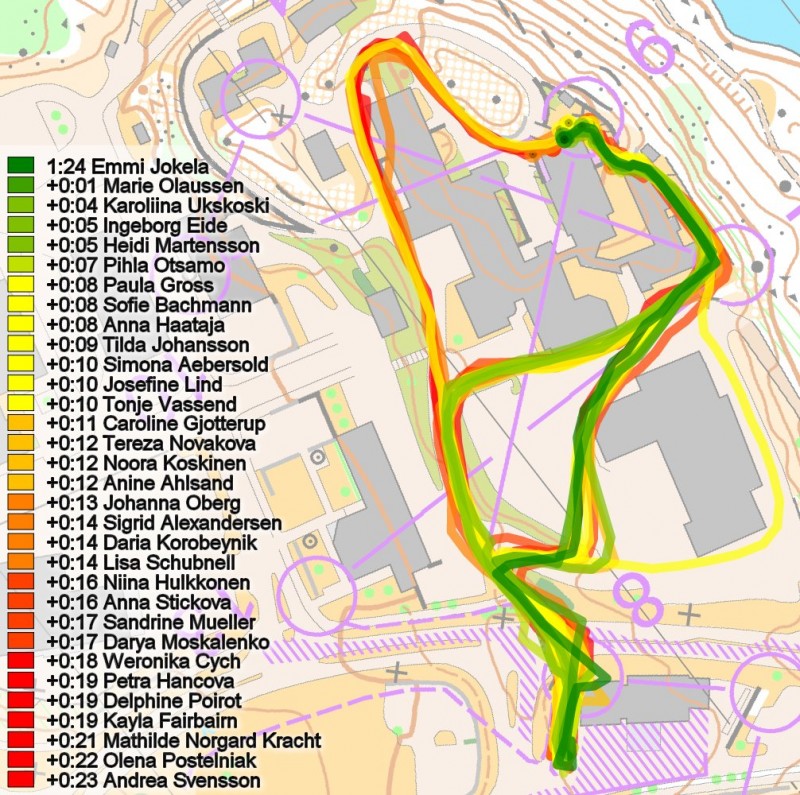 As for the men, going straight between the buildings is faster as it is shorter (clearly seen in the illustration with nearly all runners below). Mårtensson runs very fast on the direct route here. Aebersold runs left and loses six seconds. Several lose time by going direct as well though – this is a period in the race where Mårtensson has very high speed. 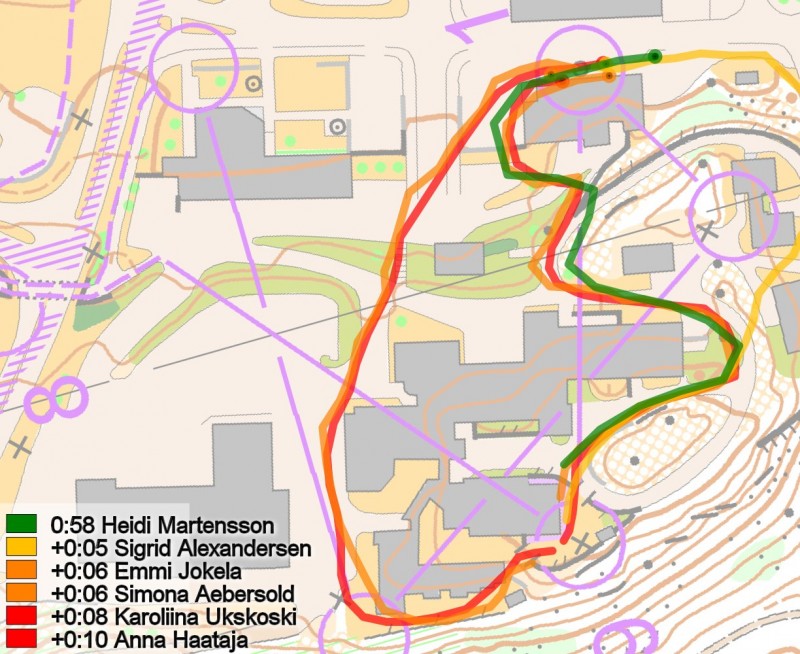 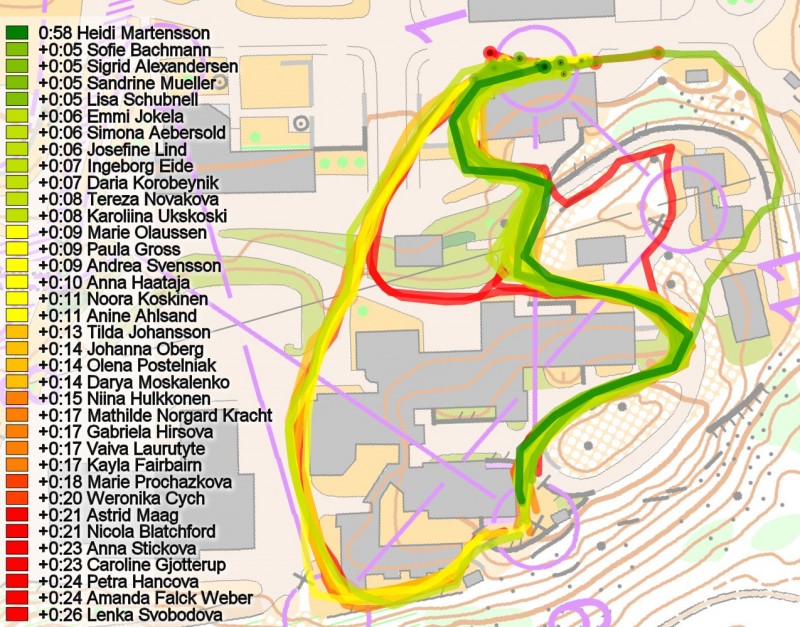 Here Aebersold takes another wrong route choice, going right through the terrain instead of following the strategy she has had all the time by taking the road. It costs Aebersold 5 seconds – and could nearly have been the gold medal. As you see further below, many women do the same. 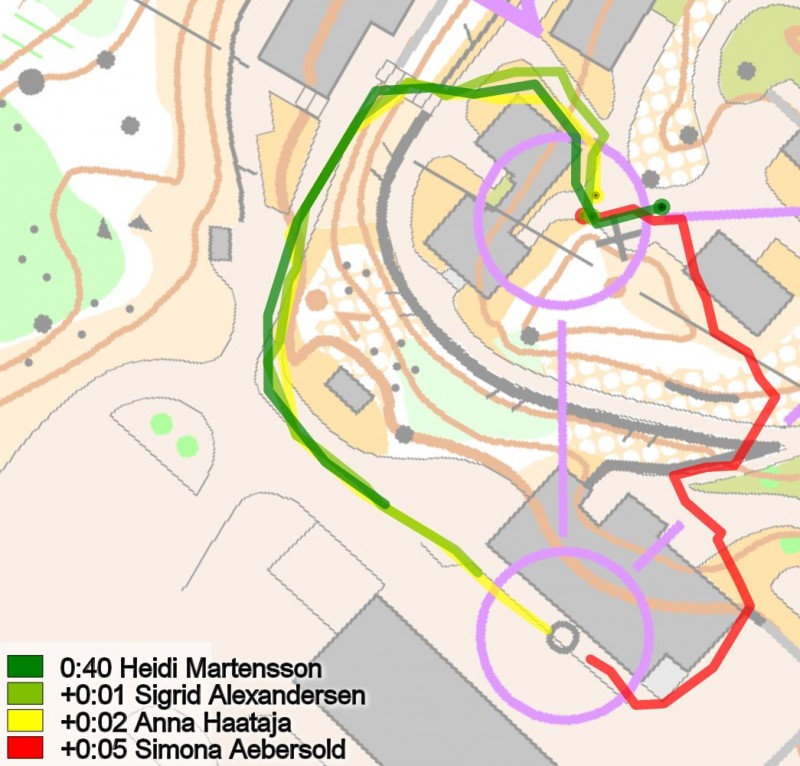 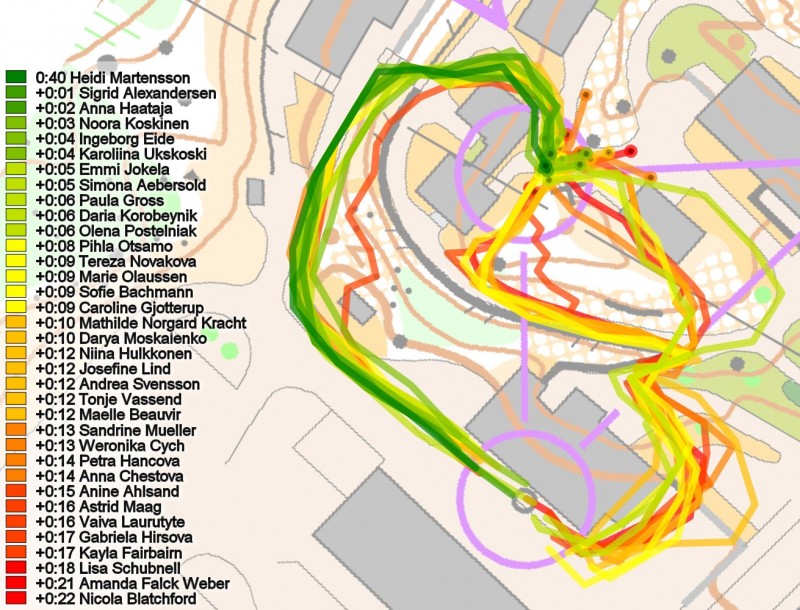 Another wrong routechoice for Aebersold – going left and losing a few seconds (similar to the men). 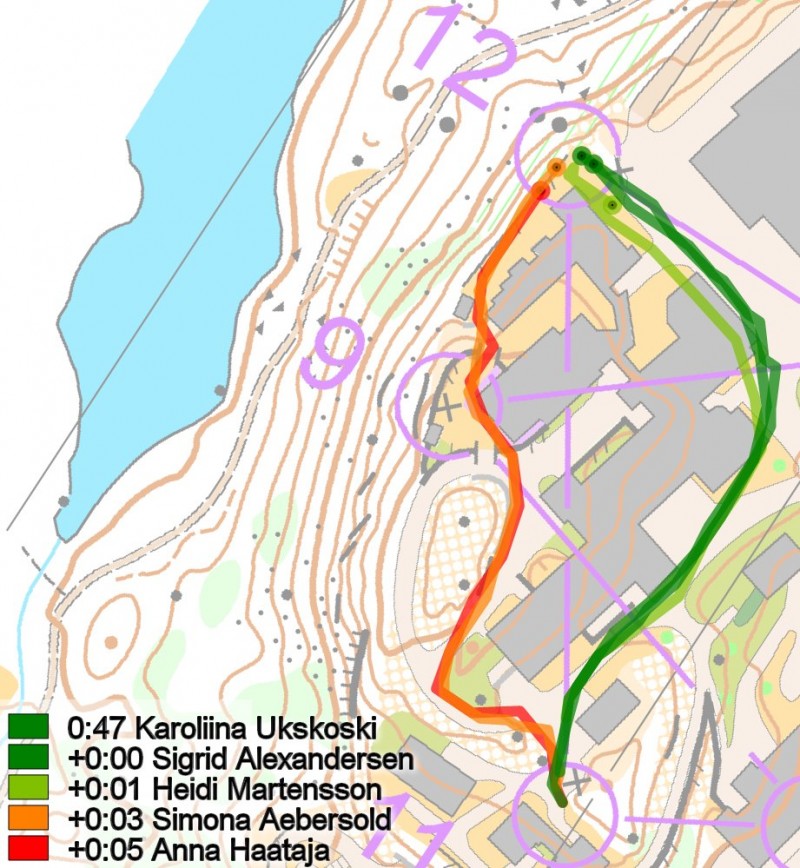 Aebersold runs incredibly fast on this leg and wins it with 4 seconds. Mårtensson takes the wrong route which is some seconds slower – but it is the running speed which decides this leg. 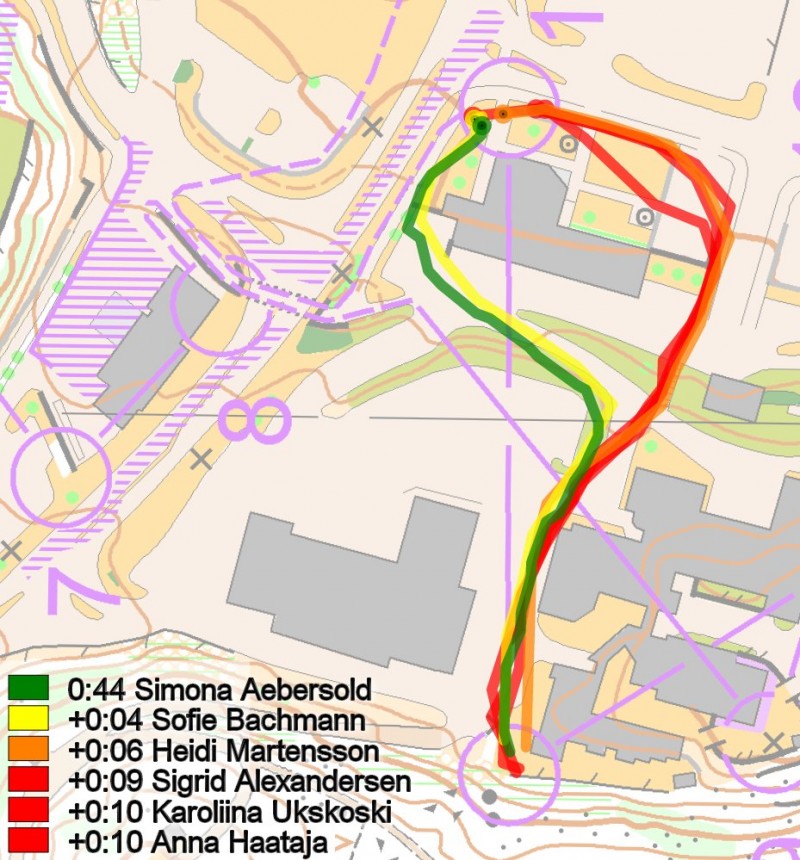 Jan Kocbach is the founder of WorldofO.com - taking care of everything from site development to writing articles, photography and analysis.
@jankoc
Previous JWOC Sprint: GOLD for Aebersold and Robertson
Next Maps and course JWOC Middle Qualification